Remember the story about a new turbocharged option for the Mazda3 coming in for the 2021 model? Well, it seems the initial report, by Jalopnik, could be right. Mazda has just released some teasers onto social media which hint at just that. 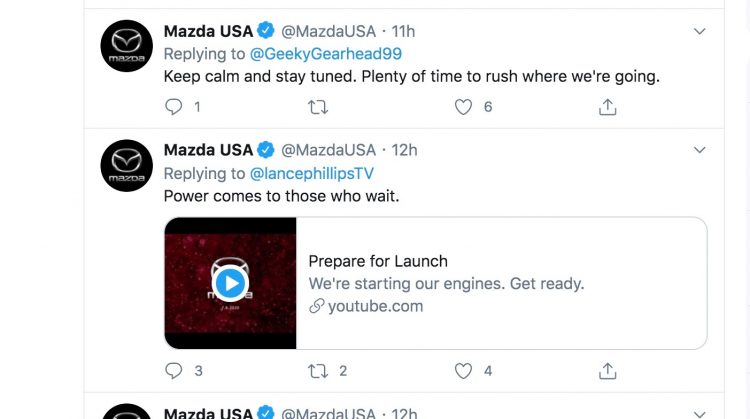 Firstly, Mazda USA has released a video onto its YouTube channel which shows… nothing actually. But it features the sounds of a revving engine, and the numbers 7, 8, and then 2020. We’re assuming the numbers refer to a reveal date of July 8.

A couple of messages also surfaced on Twitter, with Mazda USA replying to a user, saying, “Power comes to those who wait.” In reply to another user, Mazda USA said, “Keep calm and stay tuned. Plenty of time to rush where we’re going.”

None of this actually confirms turbo power, however, one of the messages on Twitter was in reply to another user who suggested, “Put that 2.5L turbo into the Mazda 3 please.” This is probably as close as we are gonna get to confirmation at this stage. 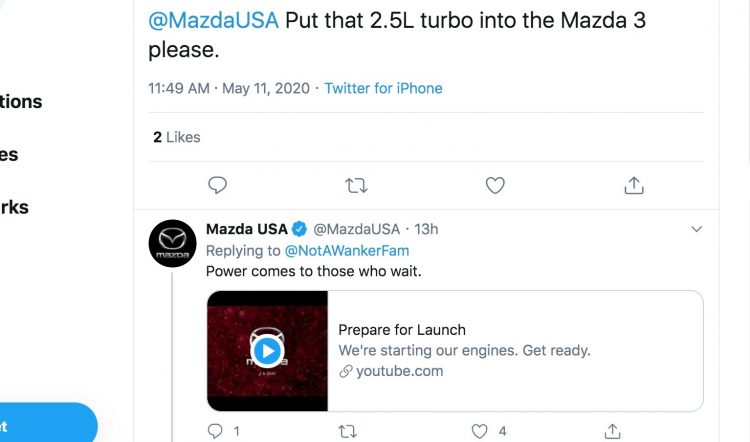 If we rewind to June 5 (linked at the top), we reported on news stemming from a Jalopnik report that said a turbo variant is on the way. The publication claimed it had seen dealer documents for the 2021 model, revealing details of a “Mazda3 HB PP Turbo” being in the pipeline.

It’s understood the turbo engine will come paired exclusively to an automatic transmission, as well as all-wheel drive (AWD is currently available for the Mazda3 in the USA). From there, it’s anyone’s guess as to what it will all entail. 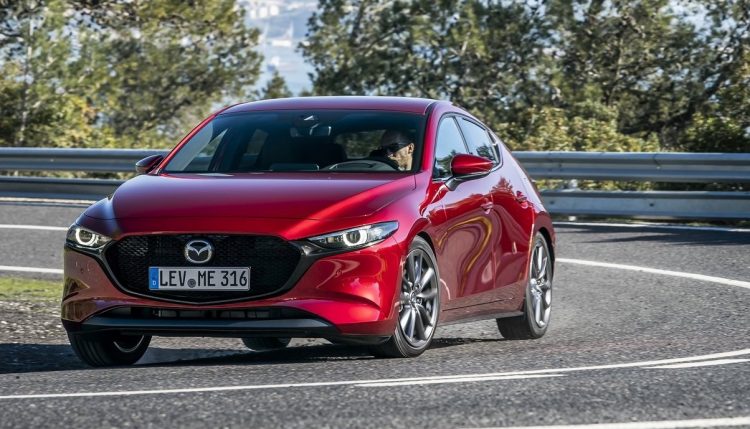 Most of the speculation points to Mazda’s 2.5-litre turbo four-cylinder, which is available in the Mazda6, CX-5, and CX-9. In those the unit produces 170kW and 420Nm. Even if these outputs were carried straight across, it’d make for a fun little car.

We get the suspicion this might be an offering for overseas markets only and not for Australia, especially as AWD is not currently an option here. We don’t have to wait long in any case. All will be revealed on or before July 8. In the meantime, take a listen to the engine in the video below. Does it sound turbocharged to you?