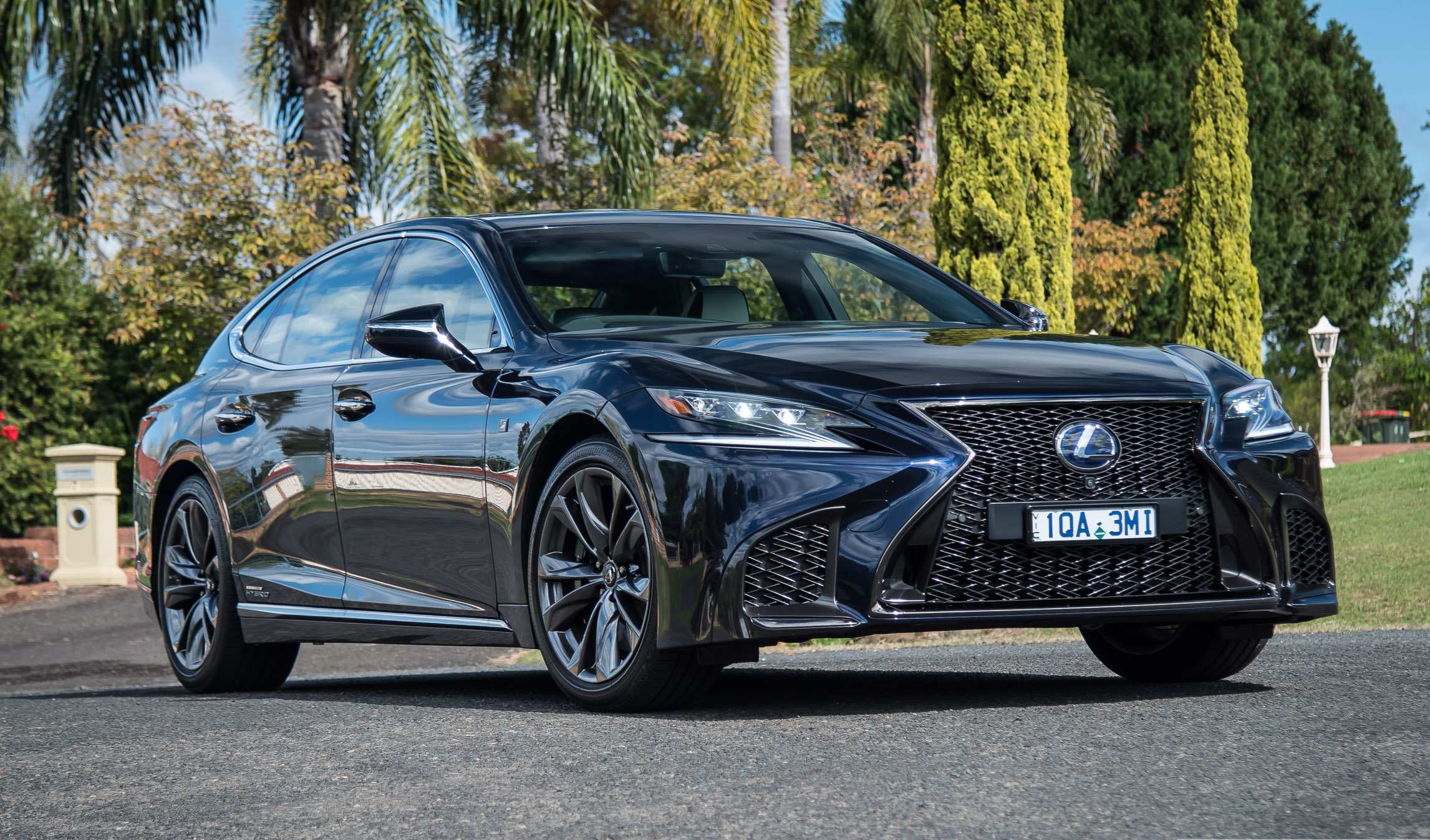 It’s one of our favourite car brands, no matter which model we’re looking at. But when Lexus releases its new generation flagship sedan, it is an extra special experience. The luxury car maker often exhibits its newest technologies and design languages in the LS. And then these eventually flow down to the rest of the model range. 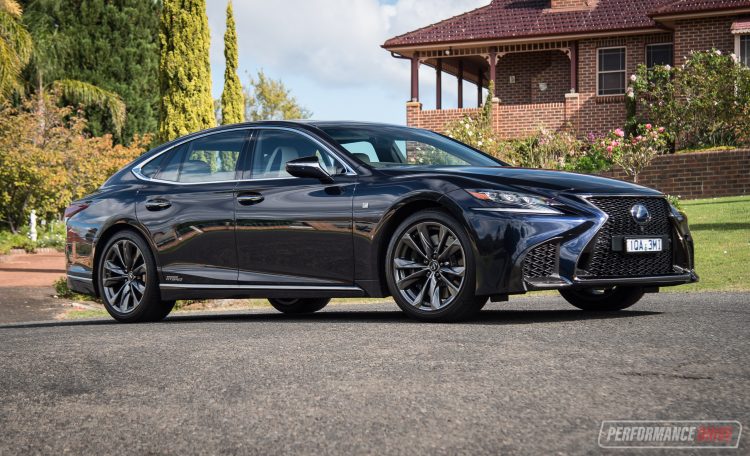 The fifth-generation 2020 Lexus LS comes in two forms; the LS 500 and the LS 500h. The 500 introduces a new 3.5-litre twin-turbo V6 petrol engine that eats up the road with 310kW and 600Nm. It is paired with a 10-speed auto transmission that powers the rear wheels. The LS 500h is presented with a multi-stage hybrid system that combines a V6 petrol engine and an electric motor system, producing a combined 264kW (combined torque isn’t listed). This uses a CVT auto.

Within both variants you can choose from the F Sport or Sports Luxury grades. Prices kicks off from $190,395 for the LS 500 F Sport. Our LS 500h in F Sport guise retails from $194,388. It might sound like a lot of money, but if you look at the price comparatively, it is the most affordable among its closest competition; the Audi A8, BMW 7 Series, and the Mercedes Benz S-Class 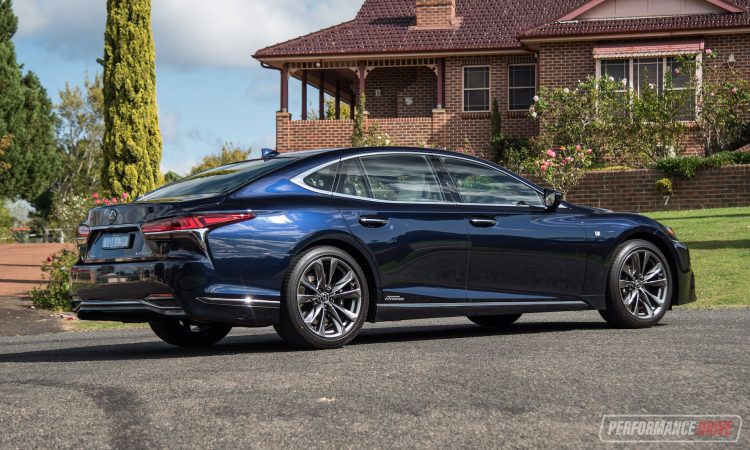 First and foremost, the unmissable exterior design is gorgeously eye-catching. It makes bold statements before the door is even opened. There’s that famously huge invert-hexagonal spindle front grille, and sharp and angular LED headlights that all point to the prominent Lexus badge in the middle. Lines and contours paint a story of sleekness and unsurpassed elegance.

As you roll your eyes towards the back of the car you’ll notice some neat touches, like the dual black and body coloured side mirrors, and the contrasting black line along the bottom of the doors. This generation has a more athletic stance than before, thanks to the higher boot line and the gradually sloping rear window. We love it. 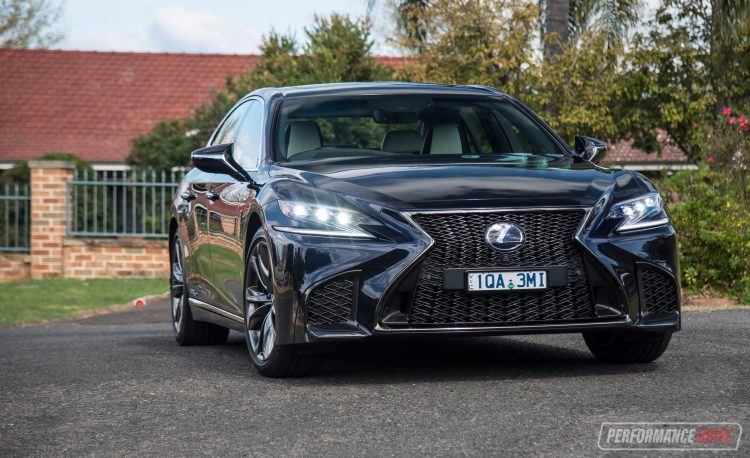 The taillights capture you just as strongly as the front, with beautifully crafted L-shaped LED lights and a lens that wraps around the corner of the body. Hopefully you don’t see hints of a Toyota Camry at the rear like we do (even though the platform and interior are nothing like the Camry).

The experience gets more tantalising as you step inside. From the scent and feel of the soft leather to the feel of the knobs and buttons, the LS is a feast for the senses. Quality is the principal theme. We love the flowing lines stitched into the padded doors, the seamless ‘floating’ door armrests where you can’t see where they attach to the doors, air vents that blend into the lines of the dash design, and the centre console lid that can be cleverly opened from either side. It’s all top-shelf luxury. 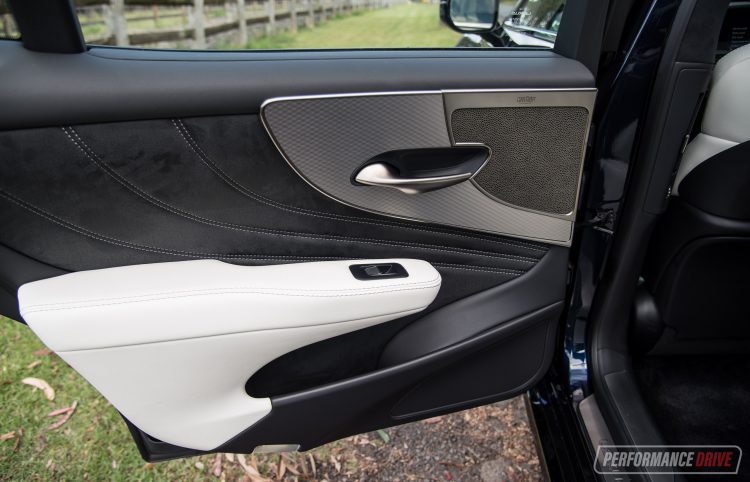 In the instrument cluster on the F Sport, the singular large dial – similar to what’s seen in the Lexus RC – physically moves electronically to the side when you open a menu or change driving modes. This gleams sophistication and attention to detail.

You can navigate everything from a huge 12.3-inch multimedia screen that can be spilt into two menus. It is controlled by a rather fiddley trackpad that guides the pointer using vibrations over the on-screen buttons. We used it solidly for a week and we did not become more fluent with its operation. Your eyes need to be repeatedly reverted from the road to the screen, more so than with other systems. But the screen itself is superbly bright and crisp. 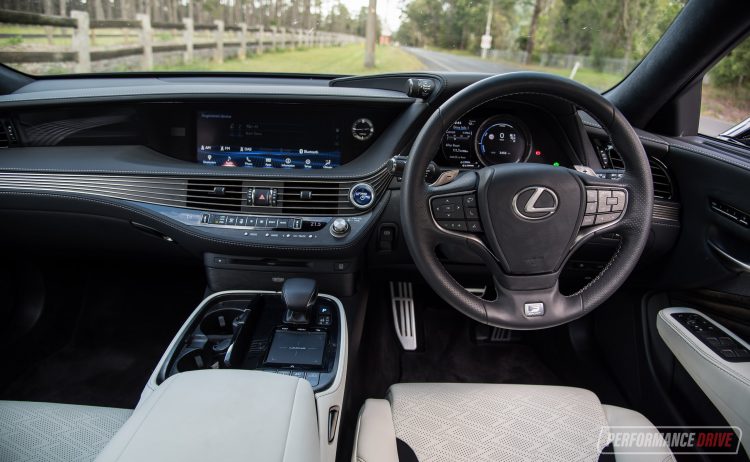 On the technology front, there’s no compromise in Lexus’ flagship sedan. It comes with all of the latest safety prevention measures and more. Like an all-speed radar cruise control, two-stage adaptive high-beam, a panoramic parking camera system, clearance sonar around the car, a pop-up bonnet for pedestrian collisions, and rear pedestrian detection.

You also get a 23-speaker Mark Levinson surround sound system that is out of this world, 28-way power/pneumatic adjustable front seats that are just splendid, power adjustable front headrests, heated rear seats, a kick-sensing boot lid release, suede headlining, and 20-inch alloys with run-flat tyres. Boot space is large enough to make a royal feel well accommodated. At 480 litres, it easily slides a few suitcases of varying sizes inside.

Lexus offers a four-year/100,000km warranty. It’s not quite at the five-year standard that non-premium brands are offering, but you can be assured that Lexus has one of the highest customer satisfaction ratings on the market. Servicing is required every 15,000km or 12 months. 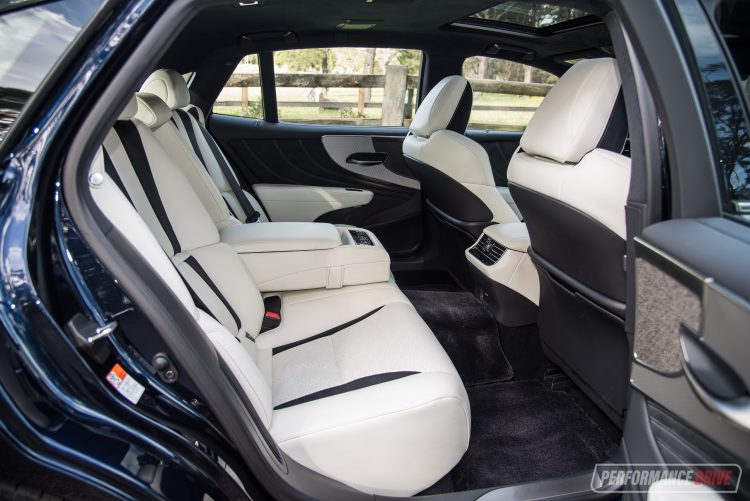 Thanks to Lexus (and only a fraction of other manufacturers), you can now have the fuel and environmental benefits that come with hybrid technology without having to compromise on engine performance. The 3.5-litre V6 in the LS 500h is a feel-good engine that is designed to exhilarate. It loves to be revved hard and it sounds awesome, too.

In the past, we’d hear the music of a V6 in the top end of the rev range until it pulls away and settles into a higher gear. With the CVT auto, it sounds uncanny at first to hear a gutsy six roaring at the same revs until you back off the accelerator – similar to if you were to rev it up in neutral. Nonetheless, it pulls away with brutal force and confidence, and will hold onto that 6600rpm redline until you have had enough. Interestingly, we clocked a best 0-100km/h run in 5.75 seconds. That’s marginally quicker than the 5.80-second time we achieved in the 310kW LS 500 recently. 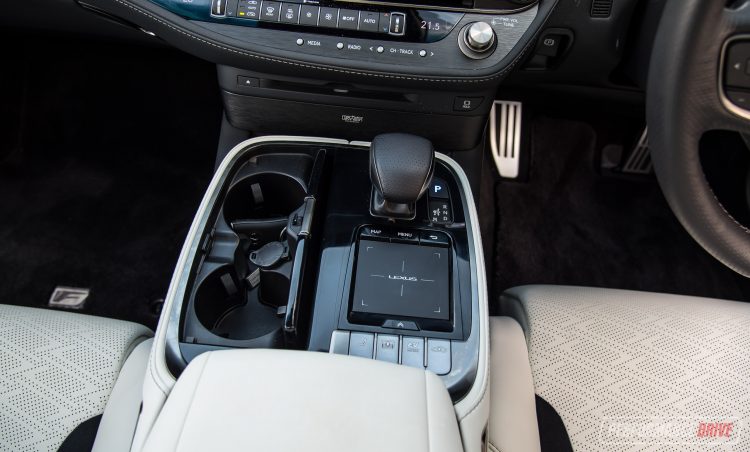 There are selectable driving modes that change the behaviour of the LS more than in others cars. For example, you can select Eco mode that relies more heavily on the electric motor, until you either push the accelerator firmly or run out of electric juice. If this happens it seamlessly transitions to the V6 engine. Sport and Sport + modes allow the LS to truly come alive, and you can immerse yourself into a different world of performance eagerness. Suspension, steering (including rear-wheel steering), brakes, and throttle response are all amped up in these modes.

In the way of driving dynamics, the new-gen TNGA-L platform provides outstanding dynamics. The suite of initiatives adopted in the LS are too many to mention. But there’s multi-link suspension with double ball joints, adaptive variable air suspension – which can raise the vehicle by 30mm for easier entry and by 10mm for vehicle exit – an actively adjusting stabiliser bar in the F Sport, and a new electric power-assisted steering system.

All of this translates into a luxurious and comfortable sedan that can also handle a hiding around winding roads. Body roll around corners is minimal, and bumps don’t seem to muck the LS’s tracking, either. In fact, even bigger potholes are adsorbed impeccably. The steering offers a perfectly light operation at low speeds, and a confident weightiness at higher speeds. You could seriously cruise along at highway speeds for days in this cloud. Of course, it helps that you’re sitting among an interior fit for royals. 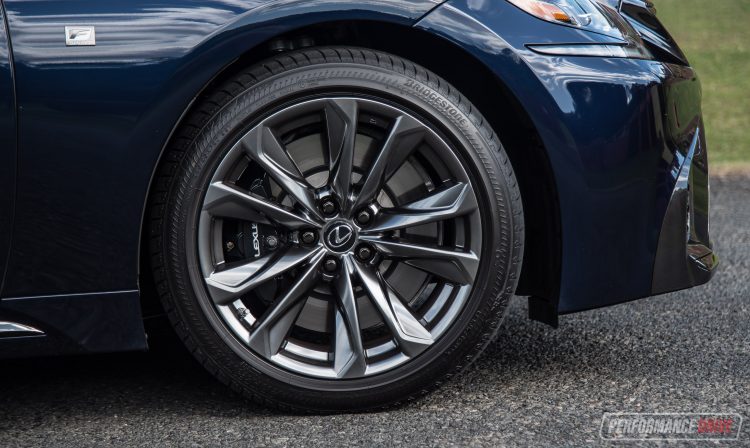 A small setback though is in the brakes. Despite beefy 400mm front discs and six-piston opposed calipers, and 359mm rear discs with four-piston opposed calipers, you really feel the heavy 2280kg kerb weight of the car and the power of the brakes competing as they dig in when you come to a stop. The car rocks back and forward, and it’s nearly impossible to stop smoothly – not the best trait in a car that’s ridiculously blissful to ride in in every other way.

A bigger setback is the real-world fuel consumption. The official ADR average is 6.6L/100km. This would be amazing if it were achievable, given the substantial power. But we were not able to achieve under 9.2L/100km. Even taking easy-going highway trips did not make that figure fall. Other Toyota hybrids usually compete well here. But we figure if you can afford the LS, you probably won’t be too concerned about your driver’s fuel bill. 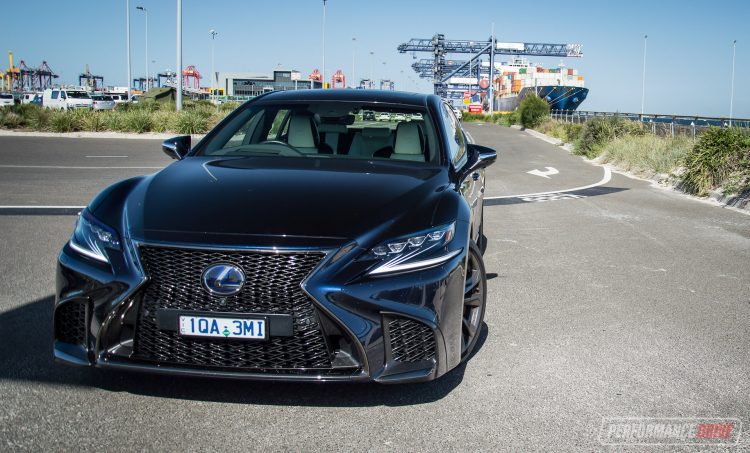 And then the biggest setback for us is in the cruise control system. Franky, it’s horribly unrefined. It doesn’t maintain a constant speed, it makes the engine do all sorts of silly things, ruining the otherwise peaceful drive. And it just doesn’t seem to be as intuitive or as connected with its surroundings as other systems on the market. Some incessant beeping every time it over-speeds down a hill doesn’t help. You would be reasonable to assume that Lexus took the system straight out of a 2015 Toyota Corolla.

The LS 500h is the flagship model for Lexus, and is sometimes regarded as the flagship sedan of the entire luxury car market. It is as luxurious as they come. You can appreciate how much quality control and attention to detail that goes into it  building it. It’s bold and striking exterior is unmissable, and the comfort levels inside make the most tedious of trips pleasurable.

And with all this, you still get a powertrain that is everything but boring. It’s fun, eager yet creamy smooth, and pretty quick. It’s difficult for us to admit this, but the 500h hybrid does seem like the best fit for the LS’s character and intended purpose.

PROS:
– Beautifully presented interior, lives up to the price tag
– Dynamic Rear Steering and sublime ride comfort is like driving a cloud
– Hybrid is surprisingly fast, especially in Sport+ mode
– Cuts through the air so quietly and with minimal noise and vibration
– Sharp design stands out against conservative German rivals