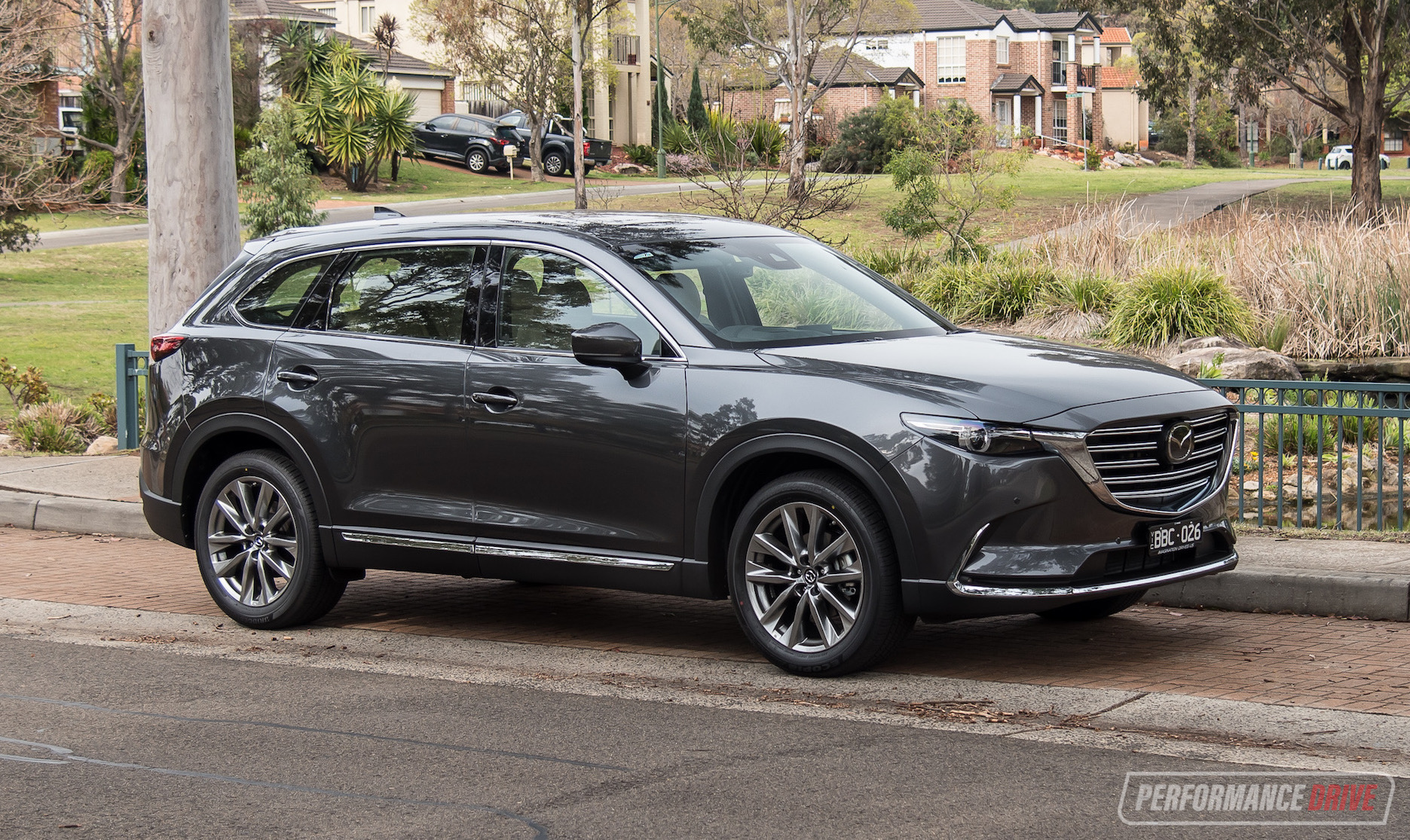 If you’re looking for the best 7-seat SUV on the Australian new car market, the Mazda CX-9 simply must be on your shortlist. Its size, build quality, design, and in-car tech are among the most attractive of the segment we think. But are there any downsides? We’ve taken one for a nice drive through the Blue Mountains to find out. 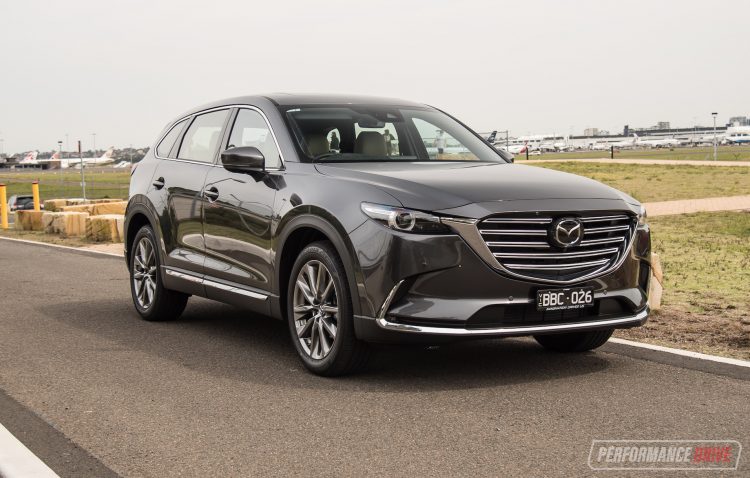 It seemed a fitting vehicle for us to test on this occasion. The occasion being a stay at the pristine One & Only Emirates resort nestled within Wolgan Valley. Getting there requires a three-hour drive from Sydney, straight through the guts of the Blue Mountains and out the other side. Along the way you encounter a decent stint of highway cruising, winding sections, some really tight mountain stuff, and lots of rural rough road surfaces.

This means the car needs to be well balanced in the corners, relatively agile for those tight sections, and above all, comfortable. Of course, there’s also the mountain of luggage one inevitably takes on a long weekend away, so boot space is a must. Lastly, the resort offers a rustic yet high-end luxury experience. It’d be nice if the drive there is similar, right?

So we land at the 2019 Mazda CX-9 Azami. It’s not quite the Azami LE, but it’s probably going to be the more popular choice among buyers. Prices start from $62,760 for the front-wheel drive version, and from $66,760 for the all-wheel drive as tested here. 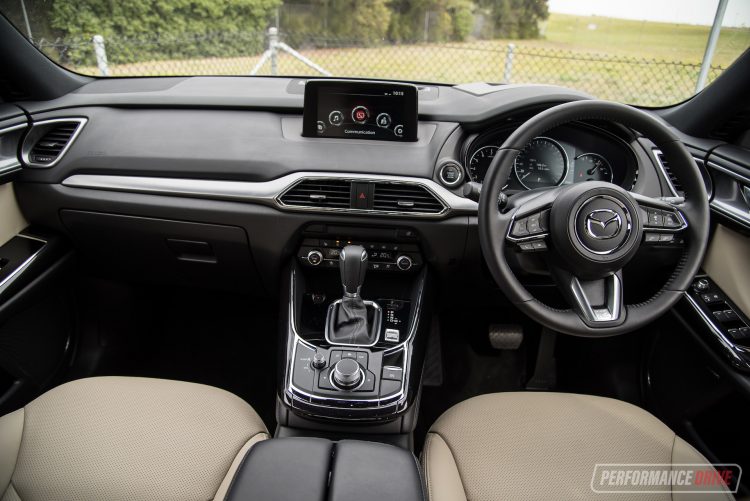 * Timing based on 2019 Azami LE, as tested previously by PerformanceDrive. Factory claims may be different 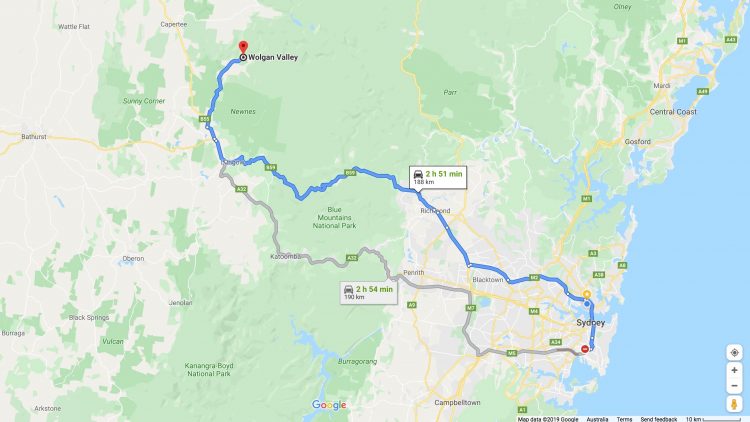 Our journey kicks off from Sydney’s inner suburb of Mascot, right near the airport, which, according to Google Maps, is 188km south-east of Wolgan Valley. Or, about 2 hours and 50 minutes drive. First thing’s first, brim the fuel tank. It’s a 74L tank and the official average consumption is rated at 8.8L/100km. This provides a theoretical average full-tank range of 841km, which is plenty for a complete return trip in this instance. However, that’s on paper. In the real world and indeed on this trip there are other factors you have to consider. Steep hills, some stop-start traffic, very tight and twisty roads all contribute to a higher fuel consumption.

Pulling out from the pickup location of this press vehicle in Mascot, we headed straight into some fairly dense traffic. Mazda now implements an automatic engine stop-start system on most of its vehicles, including the CX-9. It’s not too intrusive here and seems quite responsive. As soon as you take your foot off the brake the engine automatically fires into life. You can switch it off at the touch of a button if this annoys you, but like all vehicles fitted with such technology there is no default off position; it will always come back on when you start the car. This is all part of the economy benefits that it promises, over the long term. 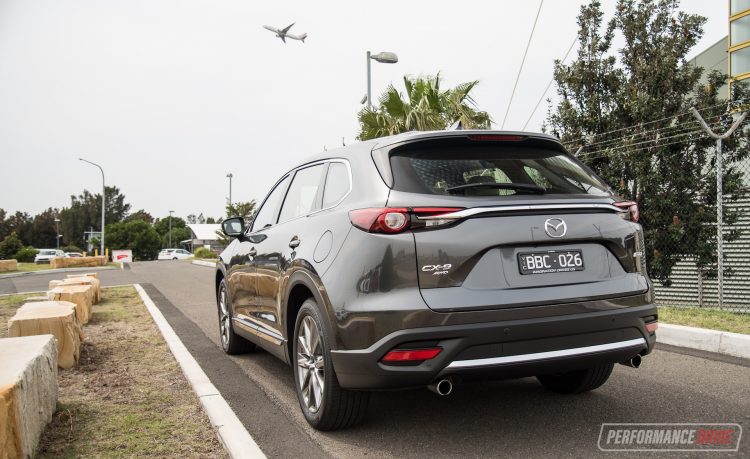 Around the city streets the CX-9 offers good visibility thanks to relatively thin pillars, although, the driving position is quite low. This is great for us sporty driving fans but it might not favour those looking for that really raised up position that some SUVs are known for. In these conditions the ride and suspension works beautifully, absorbing Sydney’s poorer quality roads with no trouble. We also like the steering in these conditions as you can easily point the front end into small side streets and even dart between lanes in those really tricky city situations with no nervousness.

Out onto the M4 motorway the 2.5-litre turbo-petrol four-cylinder engine provides decent top-end grunt. Although, for sheer overtaking performance the engine can seem just a touch under-powered for such a large vehicle. In this all-wheel drive configuration the tare weight is a hefty 1885kg, or 2000kg kerb. That’s a lot. 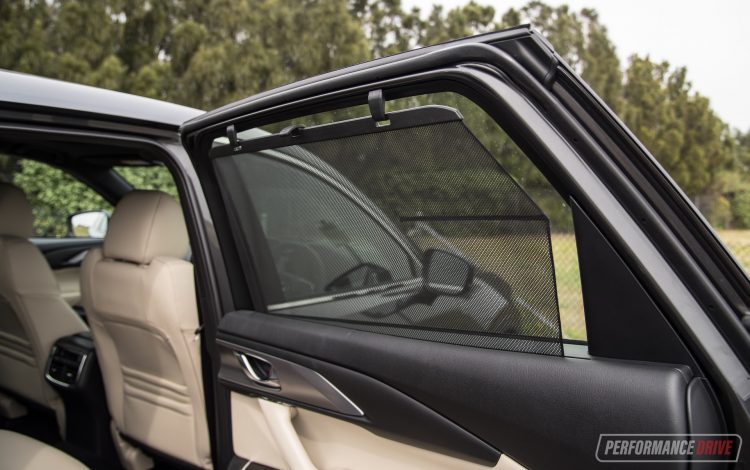 Despite Mazda regularly insisting that the large-capacity engine only needs a six-speed auto, we think the torque could be divided up and made more available for longer periods with an eight-speed auto. At the moment this engine produces 420Nm right on 2000rpm. Perhaps if the peak torque was spread across a wider rev band, like in some of the diesel rivals, it’d require less effort.

In saying that, 170kW does make it one of the more powerful units in the class, especially against all of those diesel competitors. The Holden Acadia, Nissan Pathfinder, and Toyota Kluger V6 models are the main contenders, and they do produce more power, albeit with larger, thirstier engines. We have previously tested the CX-9 Azami LE for 0-100km/h and it returned a time of 7.88 seconds. This is a quick sprint for this class, but again, you do need to whip it vigorously to experience its potential. 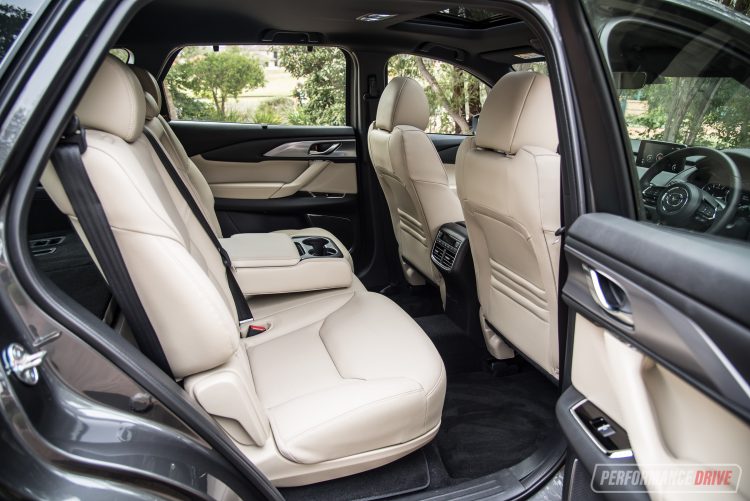 Along the highway the powertrain is very quiet, and even though there are only six gears the engine speed is reasonably low at higher speeds. It’s at this point we noticed some great touring features of the Azami, such as the pull-up blinds for the rear door windows. These are perfect for those travelling with young kids or babies. There’s also a proper climate control panel with heated outer seats. One area that is starting to show age, considering this generation CX-9 was originally launched in 2016, is the fact there are no power or USB sockets in the back of the console.

There is no shortage of space, though. All three rows of seats offer heaps of passenger room. This includes the third row, which at minimum meets the class average. Boot space is also very respectable, with 230L in seven-seat mode, or 810L with the third row folded down. If you need to haul more the CX-9 AWD offers a braked towing capacity of 2000kg (750kg unbraked). 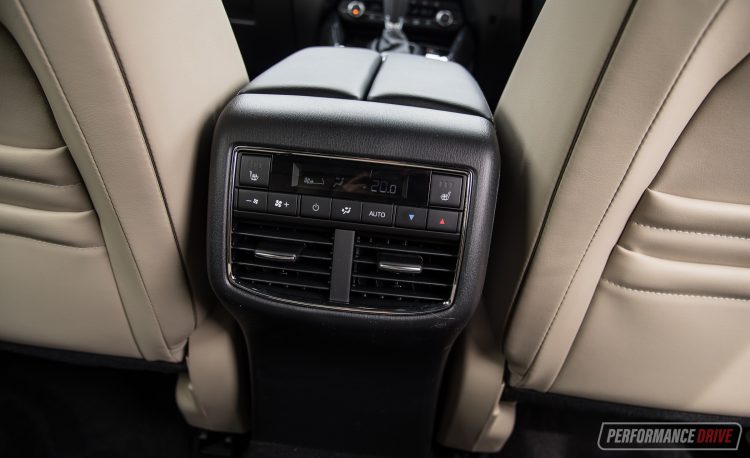 Up into the twisty roads of the Blue Mountains and the CX-9 starts to shine much brighter than many of the competitors. It really does handle like a regular car and not at all like a truck. The low-ish driving position gives you a sense of engagement with the road, while the standard 20-inch alloy wheels on the Azami use 255/50 semi-low-profile tyres for added predictability and precision. Pushing hard in these conditions and the weight starts to become a concerning factor. But, the same applies – and even more so – in many of the rivals.

Having arrived at our destination we got out of the CX-9 feeling relaxed and surprisingly energised. This isn’t a difficult or tiring vehicle to drive, even on longer journeys. And in that sense it is a great family car for Australians, particularly on Australia’s various road types. Our average fuel consumption dropped from around 10.2L/100km after picking it up to around 9.0L across the trip, and we suspect it would continue to drop with extended highway use. Our overall average was 9.5L.100km. 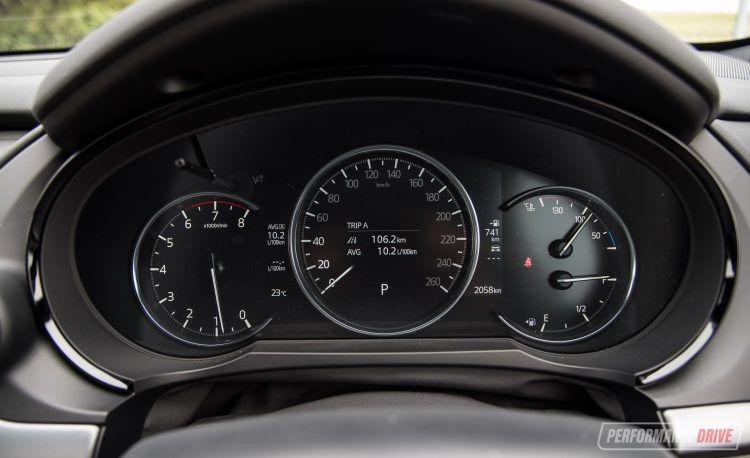 The CX-9 remains as one of the most popular seven-seat SUVs on the local market. So far this year (through October) Mazda Australia has sold 6064 examples, which is down just over 10 per cent compared with the same period in 2018. This is good enough for fifth place in the segment, keeping in mind there are now well over 20 different propositions on offer in this non-premium below $70,000 class.

Should we expect sales to increase in the future? Well, the latest model possess a great modern design that should carry it through for another couple of years yet. The in-car tech and safety is also right up to and beyond some of the current standards. Again, securing its future. For us the main drawbacks are the fuel economy, especially against the predominantly diesel rivals, and the prices are at the steeper end of the class.

During our trip the CX-9 performed flawlessly. It was comfortable and relaxing, yet well up to the task of tackling the mountain roads. The in-car connectivity with the excellent MZD Connect system, and thumping 12-speaker Bose sound system, also made the trip a lot more pleasurable. 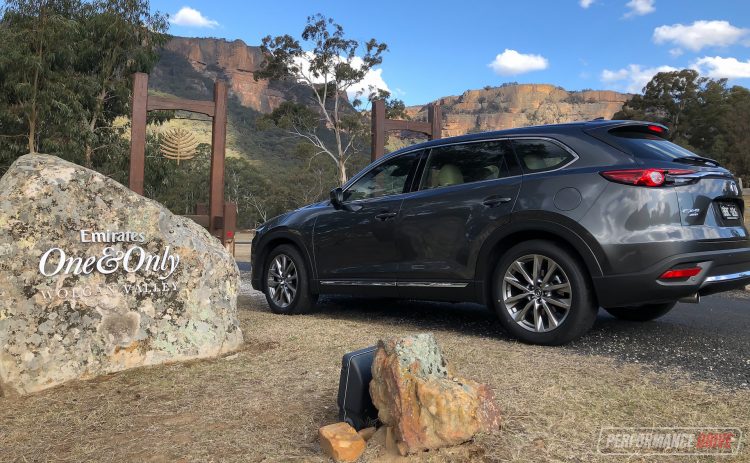