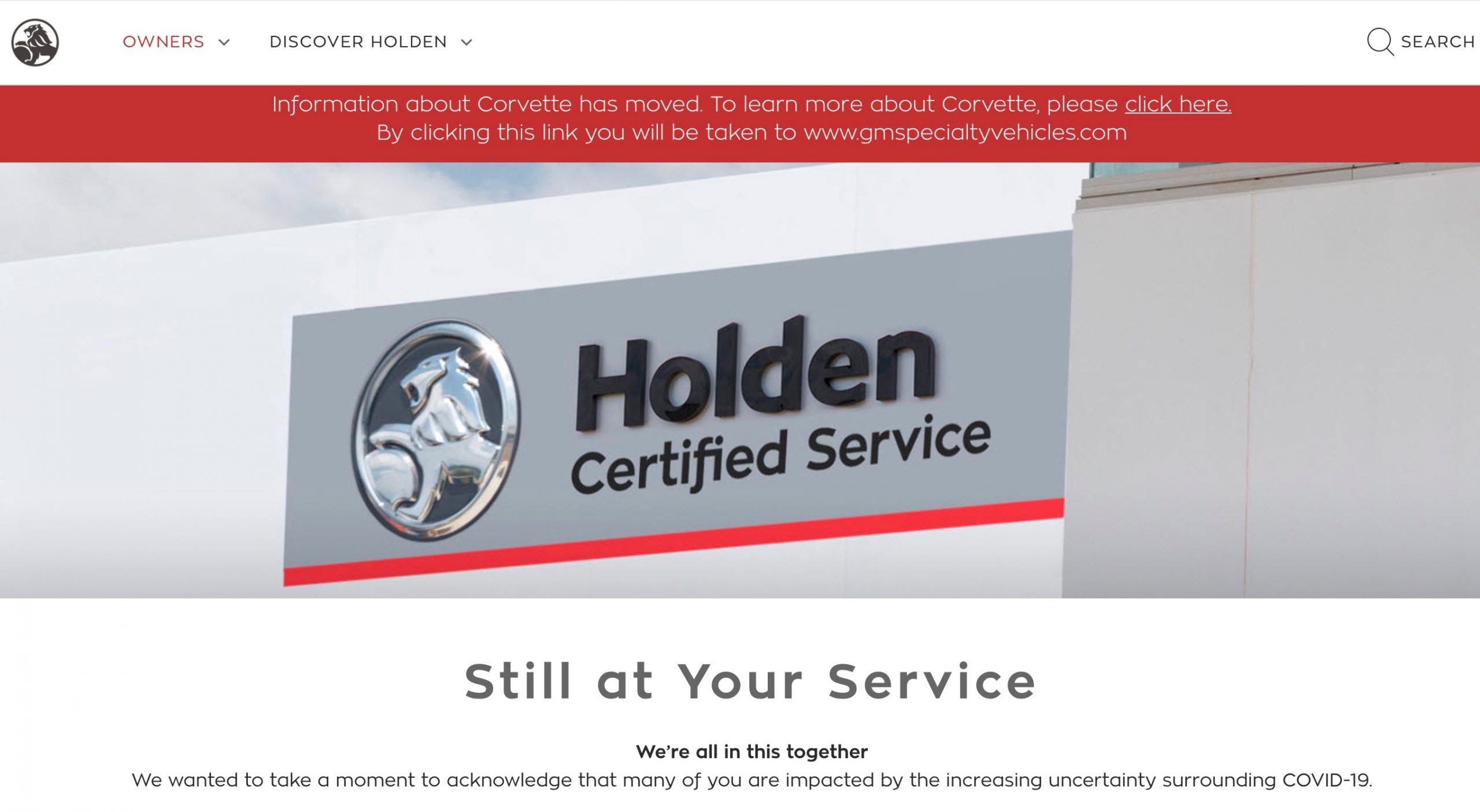 It was obviously only a matter of time but now the official Holden website is winding down and doesn’t even showcase any cars on it anymore. It also references the new GM Speciality Vehicles (GMSV) website, which confirms the Chevrolet Corvette is coming to Australia in 2021. 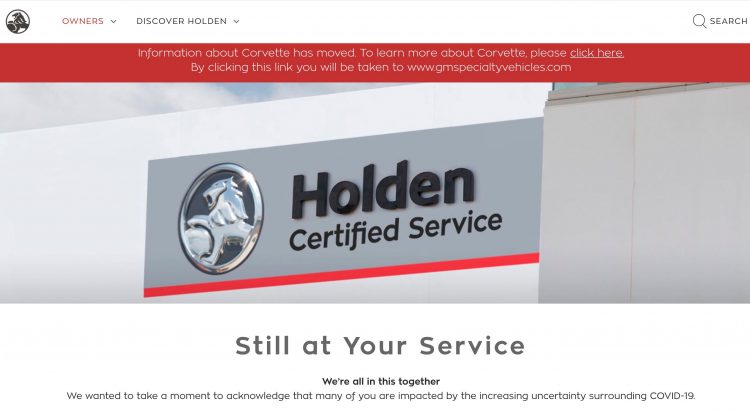 We first heard news about Holden closing and reported it back on February 16. A dealer manager discreetly told us it could happen so we did some further digging. We posted the story on a Sunday, but by early Monday morning PerformanceDrive faced a barrage of phone calls from ABC News and news.com.au. By lunchtime, GM officially confirmed it.

In just a handful of months showrooms around the country have started pulling down signage or even commenced closing down completely. And now we see the Holden website is showing only basic information for existing customers, mainly in regards to warranty and servicing.

Even the website title tag and tagline simply says, “Holden Australia | Ownership, Servicing & Information”. Not a single image of a vehicle is displayed. However, the site does provide some information regarding clearance sales for the remaining stock. At the bottom of the website it says: 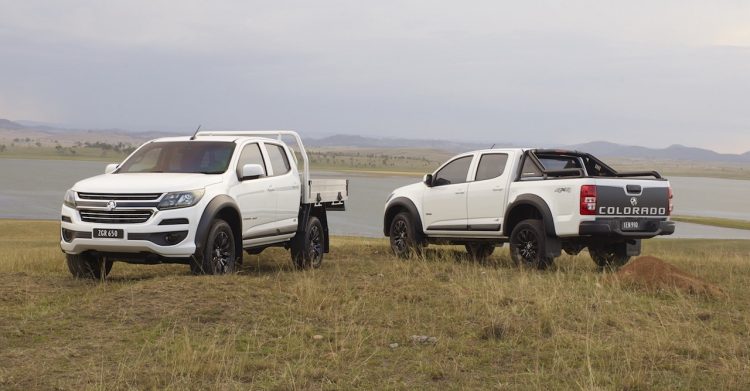 Without meaning to go all soppy, just seeing the website in such a basic state really hits home the fact the iconically-Australian brand will soon be gone forever. We’re assuming the website will probably remain in its current state for a while to help existing owners, albeit with the clearance sales reference removed.

General Motors, which has been criticised by many for the way it executed the closure, will still exist in Australia in the form of the newly-formed General Motors Speciality Vehicles brand. It sells the Silverado 1500 pickup truck and will sell the Corvette Stingray in 2021. 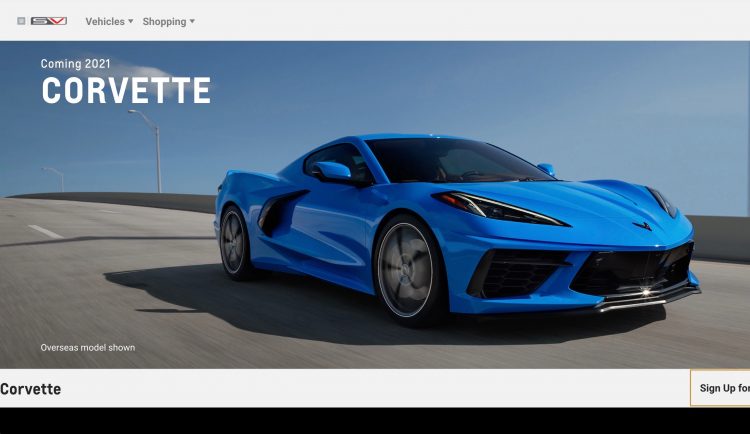 While the Silverado is converted to right-hand drive here in Australia by Walkinshaw Group, the Corvette will be imported to Australia as a factory-made right-hand drive model. That’s because it will be sold in other RHD markets around the world, including the UK and Japan. The GMSV website says:

“In the case of Corvette, we are able to source it already built in right-hand drive, but we get just as excited about our GM factory-standard local right-hand drive conversion for vehicles like the Chevrolet Silverado.” 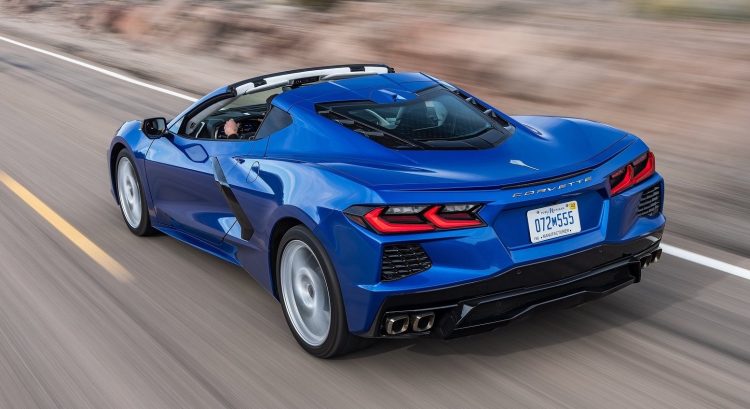 The eighth-generation (C8) Corvette will come with a mid-mounted 6.2-litre naturally aspirated V8 engine, called the LT2. It’s matched to an eight-speed dual-clutch automatic with rear-wheel drive, and thanks to 365kW, 0-100km/h is claimed in just 2.9 seconds.

Prices and local specs are yet to be announced, but GM has already started testing right-hand drive models. GMSV’s official Instagram account posted an image of a right-hand drive example just a couple of weeks ago. The model is going to be the first-ever factory-produced RHD Corvette, and the example shown was probably one of the first pre-production examples made. 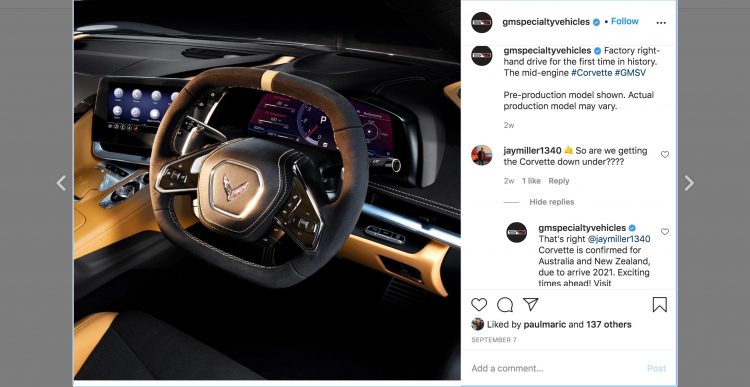