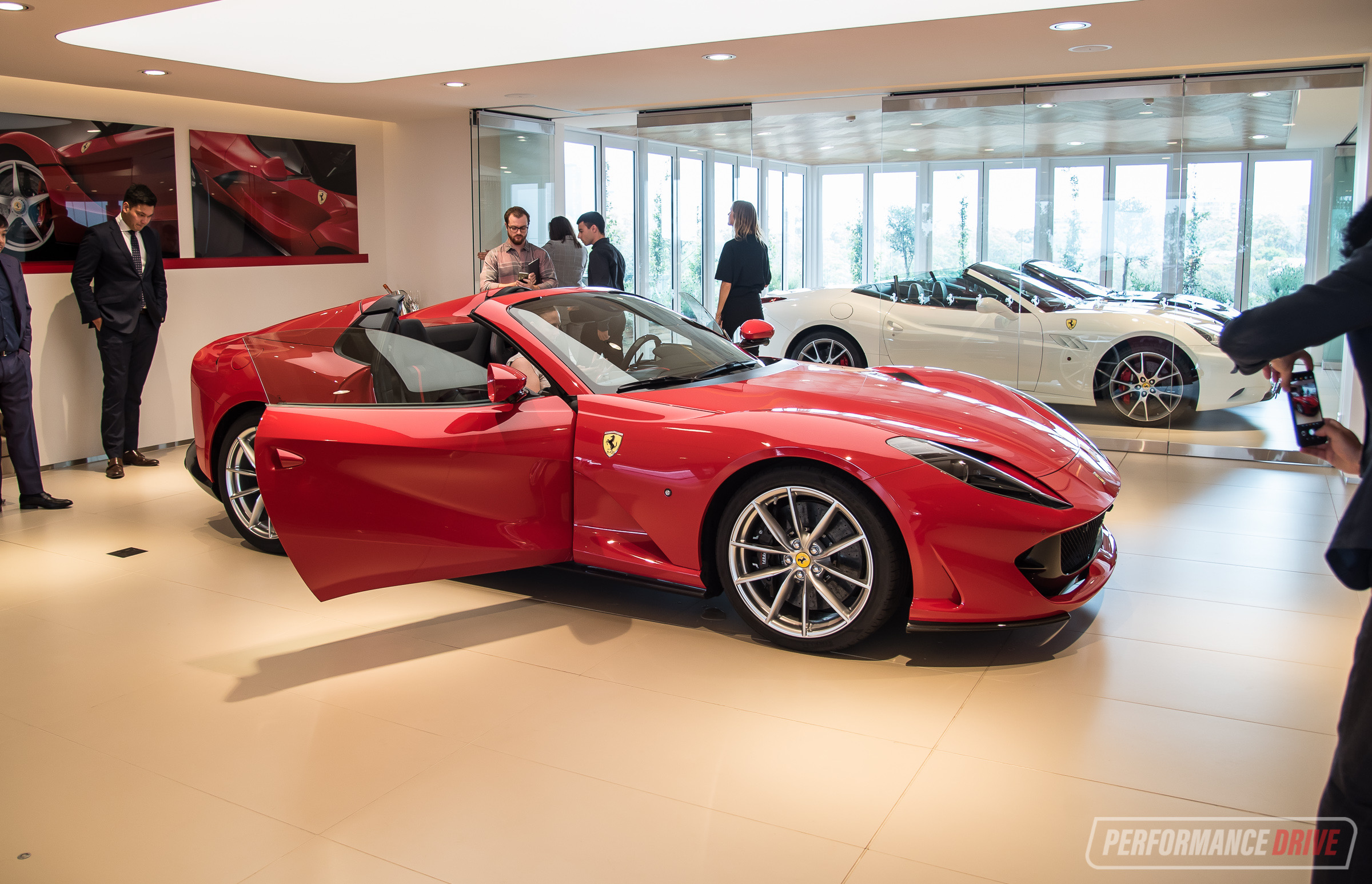 It’s the first front-mounted V12 GTS convertible from Ferrari in 50 years. It also features the most powerful V12 production engine currently on the market. Welcome to the Ferrari 812 GTS. The stunning drop-top has just made its Australian debut in Sydney, today. 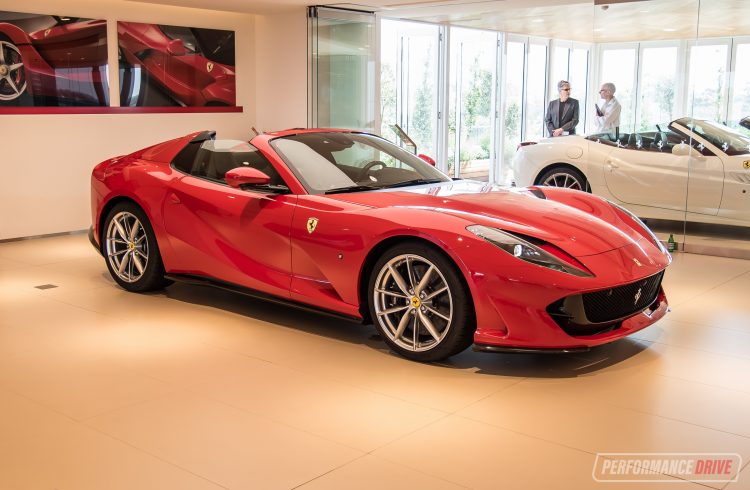 This left-hand drive show car has only been in the country for a short time, giving Aussie punters a first look at the epic convertible just two months after its international debut in Maranello, Italy. While the Australian market is experiencing an 8.0 per cent drop in new car sales this year across the industry, Ferrari is one of the rare brands that are reporting decent increases in sales. 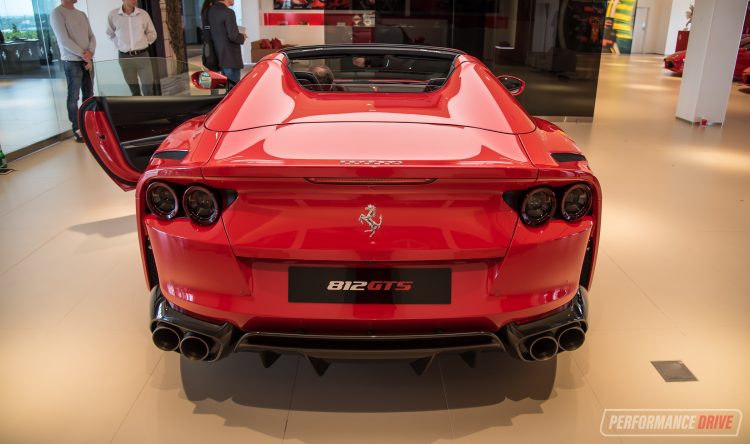 The 812 GTS builds on the heritage of the 365 GTS from 50 years ago, featuring a V12 engine not mounted behind the cabin but up front, under the bonnet. This is quite a rare configuration for a Ferrari, and an extremely rare layout of any modern production car.

You could also describe the GTS as the convertible sister car of the 812 Superfast coupe. It shares the same monstrous 6.5-litre naturally aspirated V12 too, which produces a mind-bending 589kW of power and 718Nm of torque. This is hooked up to a seven-speed dual-clutch auto with rear-wheel drive – yep, it’d certainly be a drive full of emotion and passion with all of that grunt and just two-wheel drive. 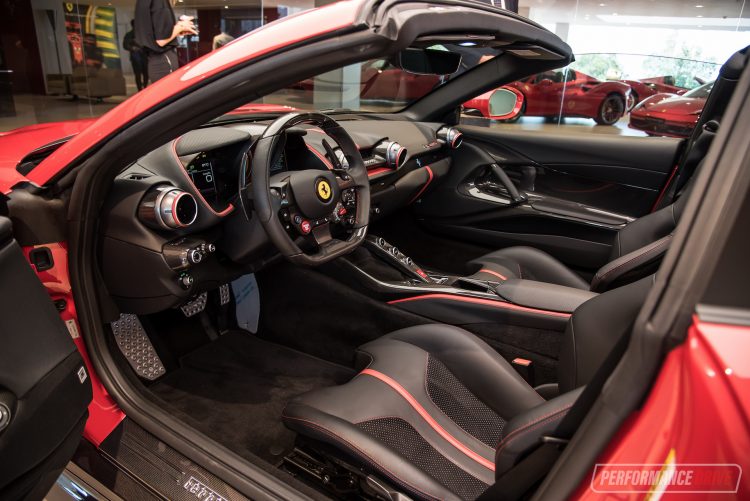 Ferrari claims 0-100km/h takes just 3.0 seconds, with 0-200km/h taking just 8.3 seconds, and a top speed of over 340km/h. To try and make sense of all that power and speed, the 812 GTS comes with loads of advanced driving technology, including the company’s latest Power Oversteer assistance, and Virtual Short Wheelbase 2.0 rear-wheel steering.

The driving experience is sure to be a slightly more thrilling one compared with the 812 Superfast coupe (if that’s possible), thanks to the ability to fold the roof down. Ferrari has designed an electric-folding metal roof for the GTS, which can be retracted or raised in just 14 seconds. And it’ll operate while you’re driving at speeds up to 45km/h.

As a result of extra reinforcements that engineers have applied to the body and structure, the GTS is about 75kg heavier than the coupe. This results in a dry weight of 1600kg. We doubt many buyers will be complaining about that, though. The GTS enters the market as a more exclusive and perhaps more elegant proposition. 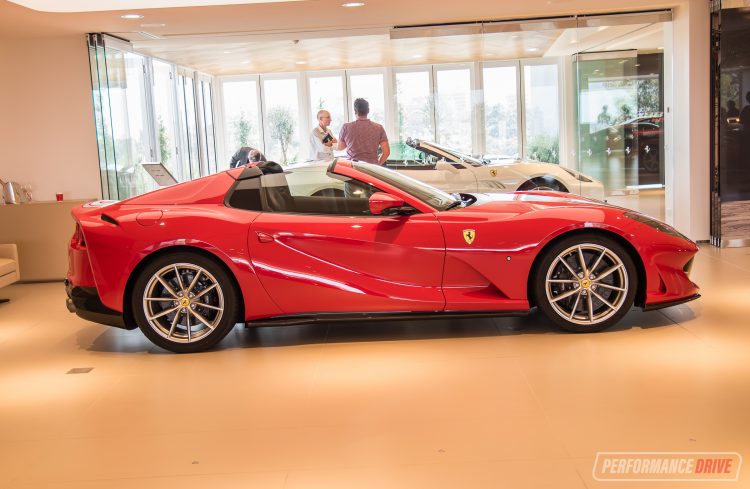 Unlike some unique Ferrari models, the 812 GTS is available to all customers. There is no prerequisite deal whereby clients need an existing Ferrari portfolio. Instead, first-time Ferrari customers can place an order. And the order books are open now.

At the special media event today Ferrari’s local representatives said prices would be announced early next year, with the first deliveries expected to arrive in the fourth quarter of 2020. It is likely to come in as one of the most expensive models from Ferrari. As an indication, the 812 Superfast coupe retails from AU$610,000 – the GTS will be more than that.\