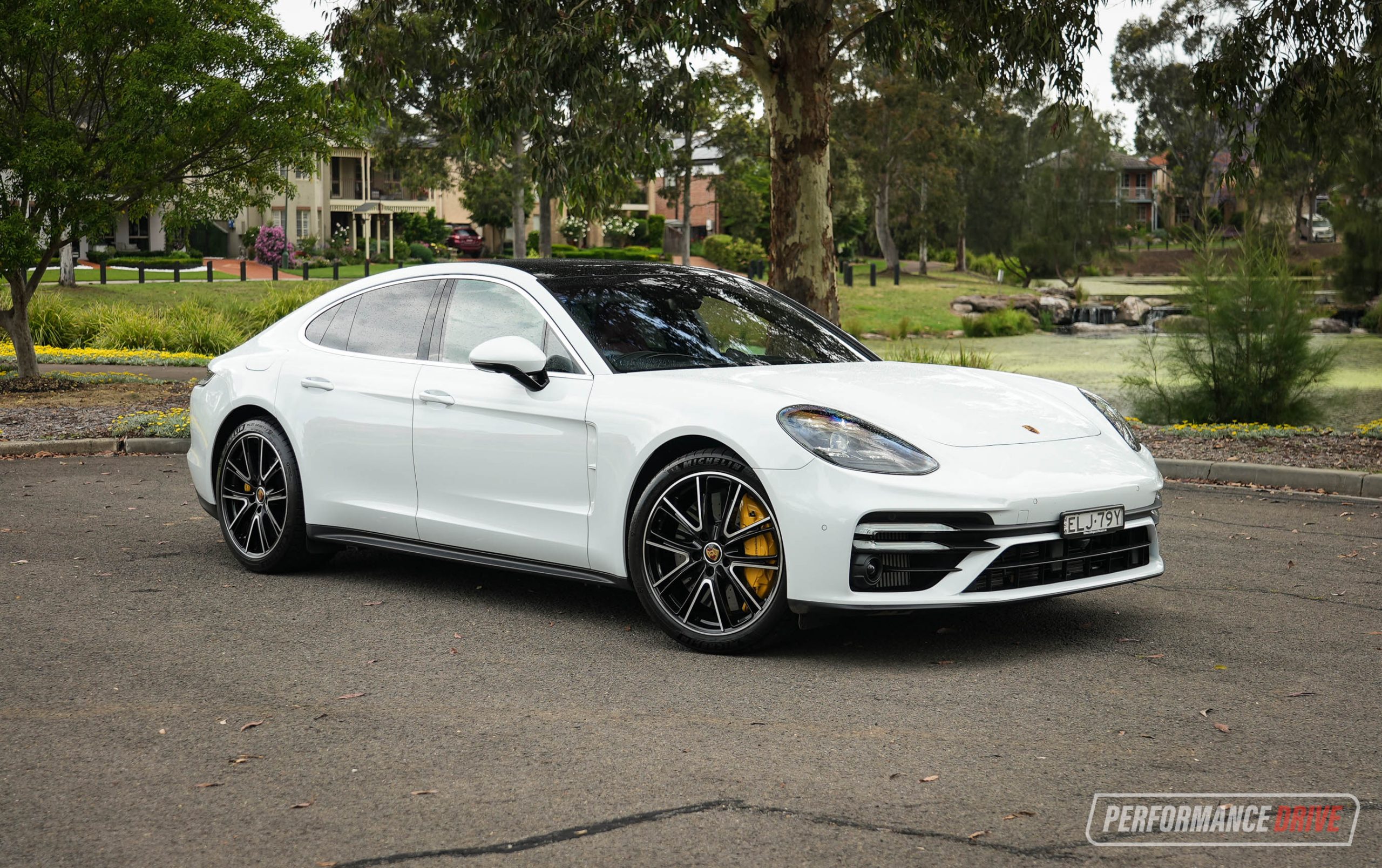 It might not look it but the 2022 Porsche Panamera Turbo S will wallop most supercars around a circuit or cross country, and even in a straight line in some cases. But unlike a supercar, this can do it in all weather conditions. And it offers up to five seats and all of the luxury and refinement you’d expect from a high-end premium sedan. 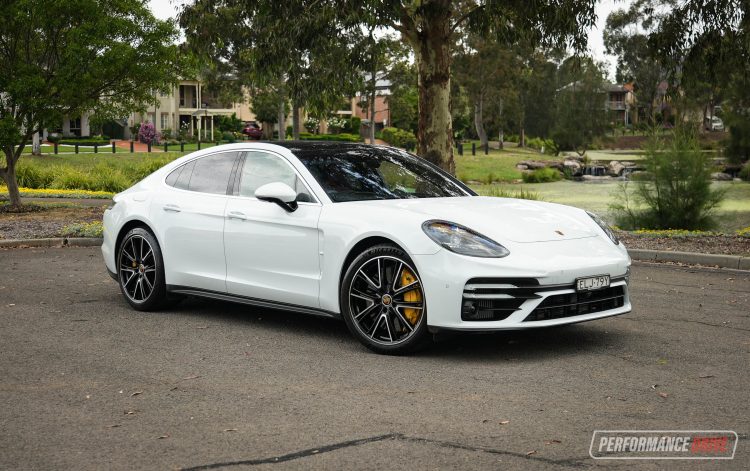 The Panamera Turbo S is an ultimate grand tourer. You can opt up to the Turbo S E-Hybrid for more outright power, but that’s a bit heavier and thus not as agile or sporty-focused. Even so, the Turbo S is still one of the fastest four-door sedans available on the new-car market in Australia, with a top speed of 315km/h and a claimed 0-100km/h time of just 3.1 seconds – that’s quicker than a Lamborghini Huracan LP 610-4 (3.2 seconds).

Prices are quite steep, as you might expect, kicking off from $415,700 (excluding on-roads). But when you consider its supercar levels of performance, as well as the additional comfort and luxury benefits over an actual supercar, the price isn’t so bad. It obviously doesn’t showcase that initial wow factor of a supercar, though. 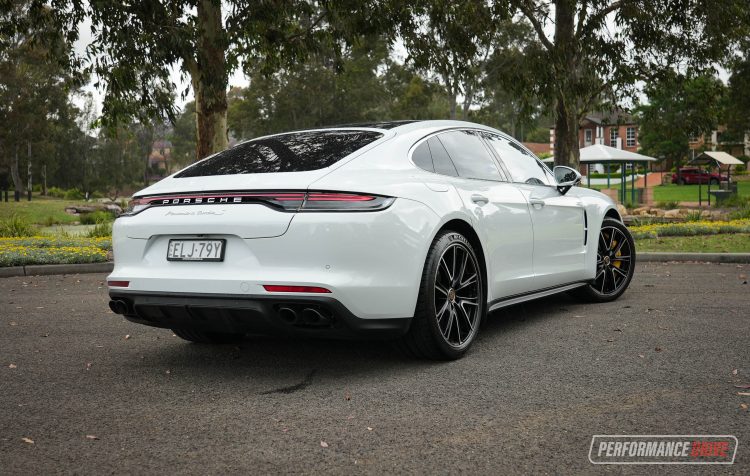 The latest Panamera looks very nice in our opinion. Much nicer than the first generation model. The horizontal grilles at the front emphasise width, and the full-width taillight, recessed elegantly below the active pop-up spoiler, does the same. Going for the Turbo S means you get adjustable air suspension which offers excellent versatility, between cruising comfort and sporty agility. The S also comes with a variable all-wheel drive system to ensure all of that power is put to good use.

As standard you get 21-inch alloy wheels, although, this test car is fitted with the optional Sport Design 21-inch wheels. We’re not a huge fan of these wheels in particular, but the black sections provide that fashionable contrasting theme. At the front the wheels are wrapped in whopping 275/35 tyres, with even massive-er 325/30s at the back. 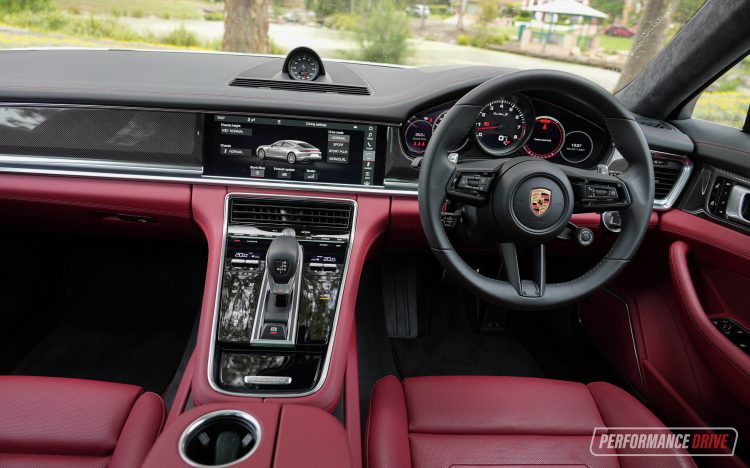 Open the door and you’re greeted with real business-class refinement. This example shows off some carbon fibre trimmings, but it’s not over the top, while all controls are presented neatly, and made with rock-solid build quality. Up on the dash is a sharp 10.9-inch touch-screen that supports Android Auto and Apple CarPlay, as well as digital radio, surround-view parking cameras, and plenty of interesting performance-type apps and car controls (including bi-modal exhaust).

Passenger space in the front is good, but the driving position is where it’s at. It is perfect. You just want to sit in here forever, with that awesome three-spoke steering wheel right at your chest. Although the seats look quite boring, following a traditional Porsche shape, they actually provide a fair bit of lateral support once you’re nestled in. 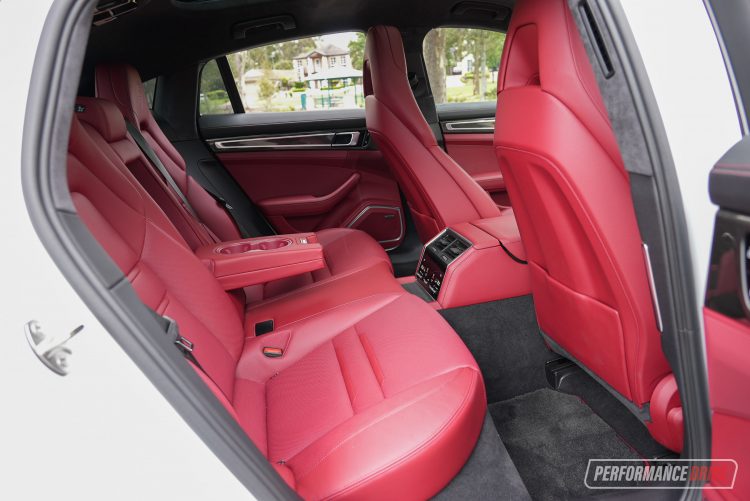 Rear passengers get their own climate controls presented on an exquisite touch panel with similar switchgear as the front. There’s a flip-down arm rest and cup holders, too. The outer seats mimmic those in the front, and not just for design but also support, while legroom is impressive. Headroom is pretty good considering it has a swoopy roof, but really tall individuals might feel a bit cramped.

Being a grand tourer, you have loads of boot space to utilise. The specs say 467L, or 1306L with the rear seats folded. The seats fold pretty much complete flat so you can load in surprisingly large and long items inside. The hatch tailgate design also opens up the loading space, so it’s easier to get things in and out. 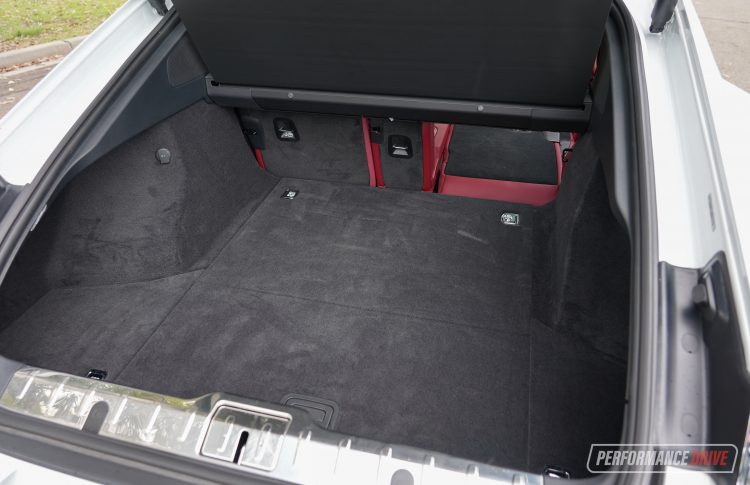 Seriously, through a cross country sprint, with a splash of rain, we can’t see how any supercar would be any quicker than this. Supercars are sometimes quite intimidating as well. This is not. You have so much confidence in the car’s capability, and you always know how the car is managing by the information that comes through the steering wheel.

The grip threshold in truly staggering. In fact, you would have to be doing something pretty outrageous to get unstuck. Even heavy throttle around corners, in the wet, it remains so solid and planted. To give you a measured perspective of its performance, Porsche set a Nurburgring lap record in 2020 in one, completing a lap in 7:29:81. That made it the quickest “executive class” car in the world.

So, that’s pretty much as quick as a Porsche Carrera GT V10 supercar (7:28, with Walter Rohrl behind the wheel), a Lamborghini Huracan LP 610-4 (7:28), and not far off a Ferrari Enzo V12 (7:25.21). These are very serious supercars with just two seats and the bare minimum in practicality and luxuries. It’s even quicker than a 991 Porsche 911 GT3 (7:32). Can you imagine attending a track day and not only keeping up with, but beating a GT3 around a track in this big, luxury four-door sedan? 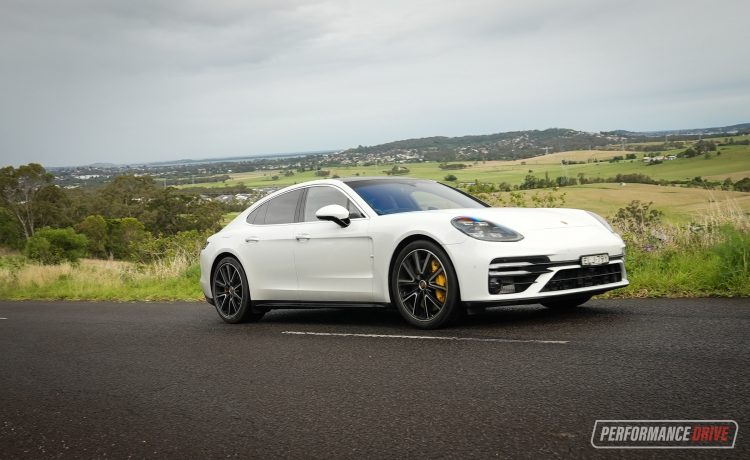 Across our usual sprint tests on a private road, we clocked 0-100km/h in just 3.18 seconds with the launch control system and 3.99 seconds without it. But get this, 0-60km/h took 1.62 seconds. Just think about that for a minute. 1.62 seconds, 60km/h. The force it puts your body through is like some kind of extreme theme park ride. In fact the Vbox reported a peak g-force of 1.389g during acceleration. Truly epic stuff.

A lot of this is thanks to Porsche’s incredible launch control system. It allows you to build the revs to 5000rpm, and then it quickly engages the dual-clutch gearbox for a flinging, catapulting take off. Porsche systems are the best in the business we reckon, and it shows here especially. Because this is a 2022kg vehicle, with all-wheel drive and turbocharging. This combination would otherwise be very tricky to get off the line.

The other element integral to all of this is of course the engine. It’s a 4.0-litre twin-turbo V8, adopting a ‘hot-V’ layout with the exhaust/turbo manifold at the top, within the V of the cylinder block, and then the inlet on the undersides. This layout is known for superior response. Peak power is a whopping 463kW at 6000rpm, with a monstrous 820Nm available between 2300-4500rpm. The turbos run at around 20psi according to the dash readout. 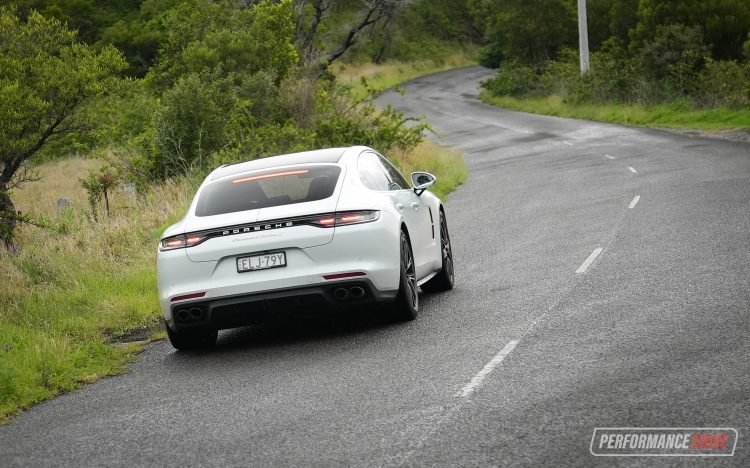 Despite all of its magnificence, we love the way this engine, this powertrain (including gearbox) can behave so gently. You can pleasantly purr around the streets and nobody, inside or outside the car, would suspect anything about its unbelievable performance. With all of that torque available it means the engine doesn’t need much to get moving, which means it is never strained or stressed during daily duties.

Usually we wouldn’t recommend a dual-clutch transmission for anything but a hardcore sports car, but Porsche engineers have worked wonders on this eight-speed unit. Most drives/passengers in normal conditions wouldn’t even feel the difference. It can remain in higher gears too, so there’s no jerkiness or anything during really slow traffic scenarios. It simply ploughs through in a very refined, unbothered manner. 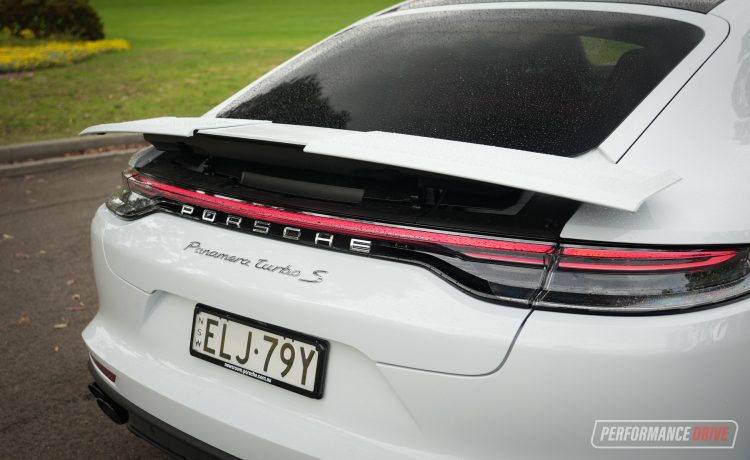 With every car we test we like to calculate something we call ‘power efficiency’. It’s a ratio that is included in our spec box above. What it does is basically tell us how efficient an engine/vehicle is at getting the most out of every drop of fuel. In this case, you take the 463kW output and then divide it by the official fuel consumption average of 11.6L/100km. That gives you a ratio of 39.91kW per litre/100km.

It might sound confusing but this gives us an immediate snapshot of an engine’s ability to maximise its fuel. Anything over 30 is super impressive. A Toyota Prius, for example, has a ratio of 26.4kW:1L/100km, and it has electric motor assistance. During our week with this car we averaged 12.9L/100km over a distance of 830km. That’s not bad considering it included plenty of performance testing. 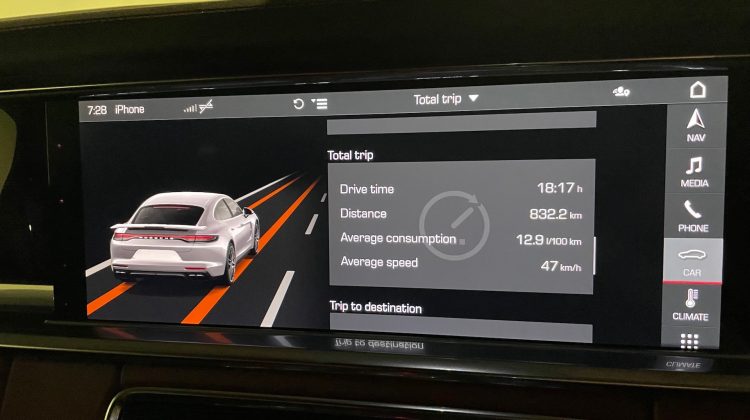 It’s a solid, extremely well made, refined, and astonishingly fast large luxury four-door sedan. The fact it has set a Nurburgring lap record and that it does 0-100km/h in 3.1 seconds gives you all the credibility you could ever need.

We love the new design. It looks a lot more sophisticated and suave than previous models. And the interior matches perfectly. The most attractive element to this car though is just how versatile it is. It accommodates a quality evening out as well as a thorough dashing in the mountains. In all weather.

CONS:
– Supercar money yet design is not ‘supercar’ enough?
– It is a bit heavy, although it manages it well