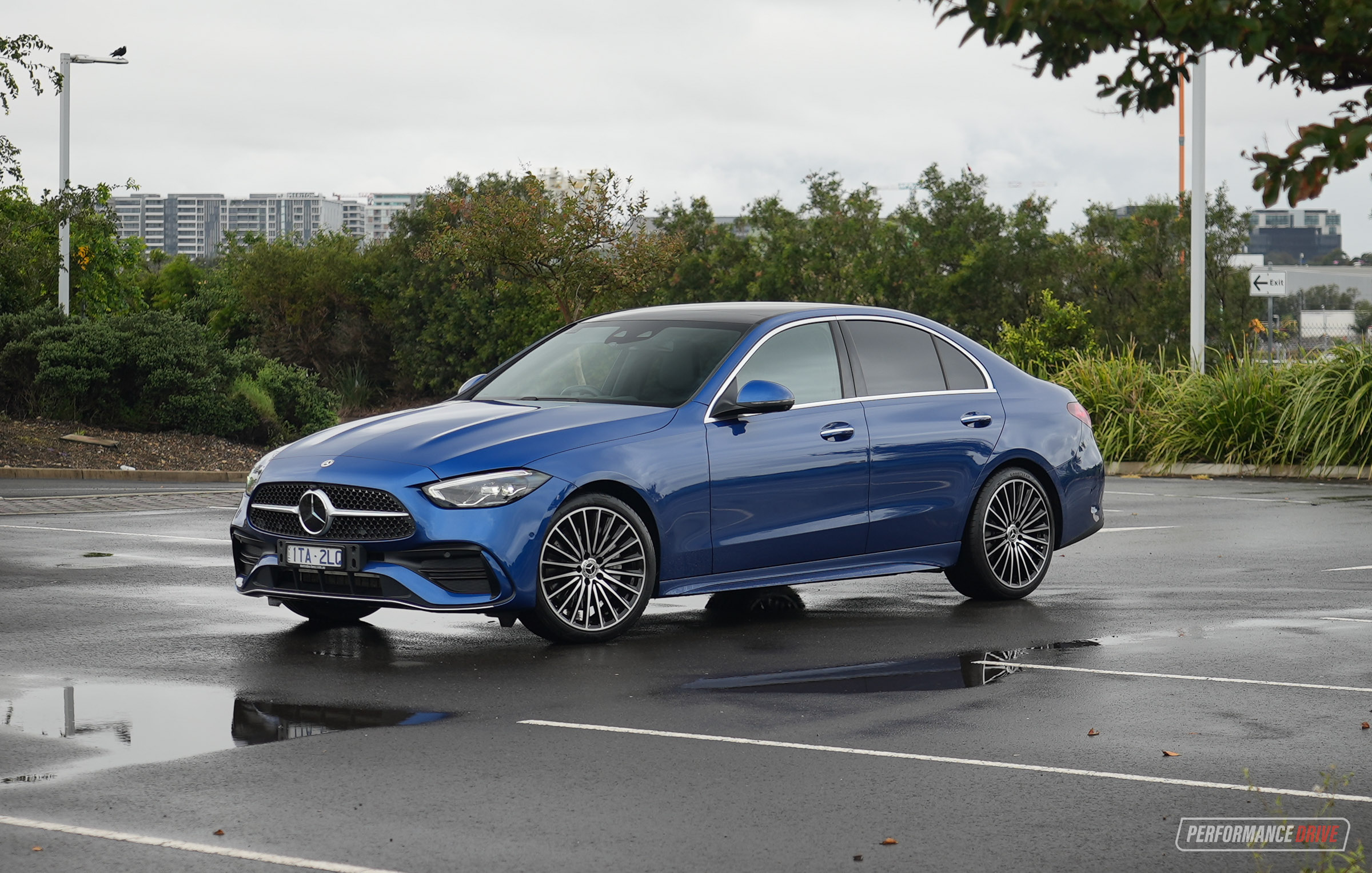 When a new-generation Mercedes-Benz comes along, everyone looks up and takes notice. That’s because new models from the legendary brand invariably reset standards in many areas. So, does the new, fifth-generation C-Class remould the segment as well? 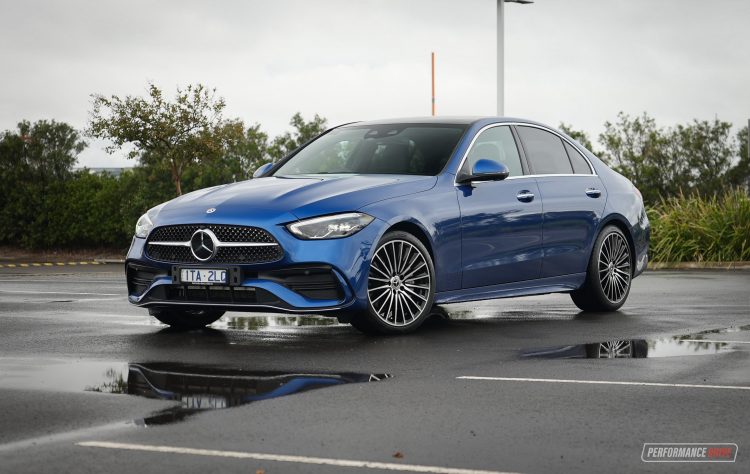 In Australia there are just two variants available – for now anyway (AMG models to follow in 2023) – with the C 200 and the C 300. Here we’re testing the latter. It comes powered by a 2.0-litre turbo-petrol four-cylinder paired with mild-hybrid technology, producing 190kW and 400Nm. Saving some money and going with the C 200 gets you a 150kW and 300Nm version of the same engine.

The new model is quite pricey, and to some extent we feel like Mercedes is charging more than some of the rivals purely to plant itself at the top. Judging by the key facts and figures, anyway. At the entry point, the C 200 starts from $78,900 while the C 300 is a more daunting $90,400 (excluding on-road costs). 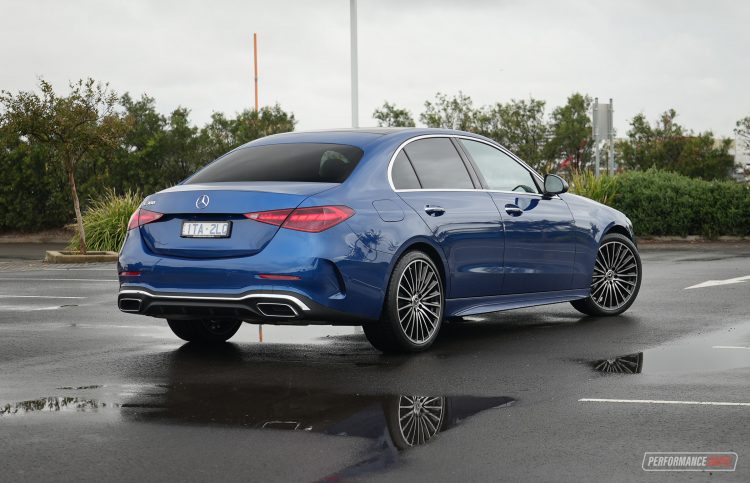 At first, you might not recognise the new model because the design does seem familiar to the previous model. But look a little closer and you’ll spot the telltale signs. Sophisticated new headlights are thinner and wider, likewise with the main grille, while the lower apron incorporates a one-piece style intake, connecting the corner clusters. Around at the back, the taillights are no longer vertical but instead mimic the larger E-Class and other models, stretching toward the middle in an elongated design.

The new model is bigger than the predecessor, too. Specifically, it’s 65mm longer, 10mm wider, and stands on a wheelbase that’s 25mm longer. That means passenger space inside is increased while the centre of gravity is optimised. 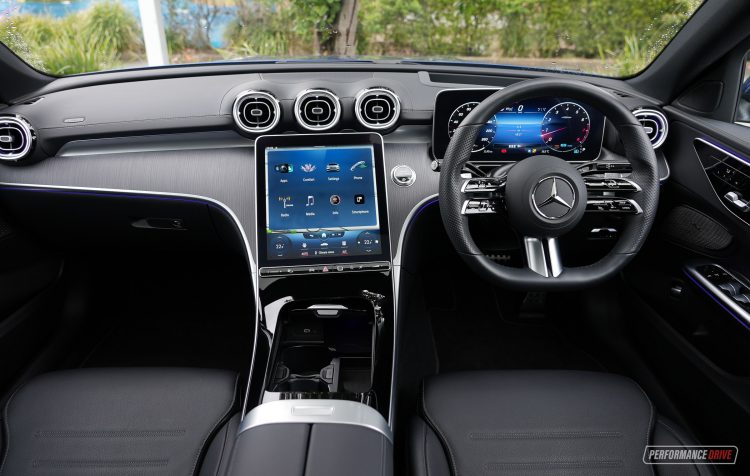 The star of this show however has got to be the interior. It is spectacular, especially for a mass-produced, albeit premium, mid-size sedan. The big touch-screen is nice, incorporating the climate controls on a separate lower section, but the graphics and colours that Mercedes has gone for show serious attention to detail. There’s a matching screen for the gauge cluster as well, with a number of totally different display modes to play around with.

All materials across the dash and the arrangement of contours and surfaces make this cabin really stand out and feel special. It definitely feels expensive, helping to justify that price tag. Passenger comfort is excellent in the front, with sporty seats that hold you in thanks to large side bolsters. There’s also a wide range of adjustment so it’s easy to find an ideal driving position, with all controls and fixtures perfectly positioned to support a relaxing and/or engaging drive.

As the driver, you don’t really need to reach across to select items within the main touch-screen. Instead, you can use the exquisite little dual-axis touch pads on that awesome sports steering wheel. The one on the left controls the main screen while the right-hand pad controls the digital cluster. At first, these pads can seem fidgety, initially requiring serious concentration. But spend some time with them and they soon become second-nature. They also help to keep your eyes focused on the road while driving. 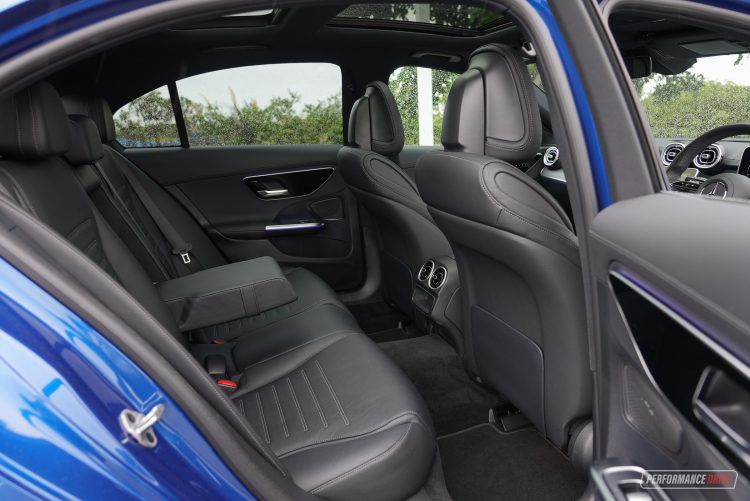 Rear seat space is about average for this class, although Mercedes says you have 21mm of extra legroom compared with the previous model. Climate vents and charging ports are of course available. We love the way the mood lighting, which is discreetly tucked away around the door handle panel, extends to the rear seat area. Metallic trimmings and vents also contribute to the sophisticated and luxurious atmosphere.

In the back, boot space is rated at 455 litres. That’s the same as the previous model. You can fold down the rear seats at the flick of a switch, allowing long objects to poke through to the cabin if need be. There is some under-floor storage as well but mainly for the emergency equipment. 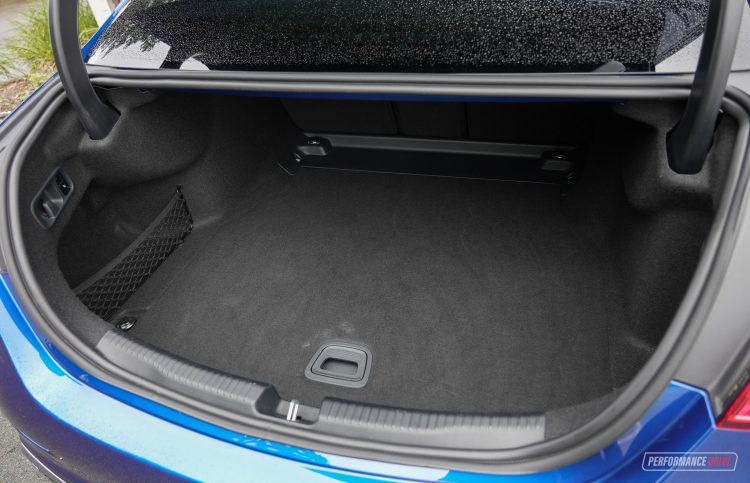 Most new C-Class models continue with rear-wheel drive, however, the C 43 and upcoming C 63 AMG is set to feature all-wheel drive via a potent 2.0L turbo hybrid system. The C 300 features what is known as a mild-hybrid setup, incorporating a 15kW starter-generator that essentially adds drive power right at the crankshaft. It provides utterly seamless engine starting as well as electric assistance on initial take off.

Despite the clever tech, the C 300’s fuel consumption is rated at 7.3L/100km. That’s not all that impressive for the given power and torque figures, and performance. For example, the BMW 330i, without mild-hybrid assistance, is rated at 7.0L/100km. Part of that is no doubt due to the added weight of such componentry, with this C 300 weighing 1744kg (tare), compared with 1538kg of the 330i (tare), for example. Even the Audi A4 45 TFSI is rated at 7.1L/100km and it has to heave quattro all-wheel drive.

Official average emissions levels of 164g/km also don’t particularly stand out among the competition, with the 330i listed at 160g/km and the Audi stamped at 162g/km.

In the real world though we experienced exceptional economy under a mixture of driving demands, including performance testing, driving in the suburbs and some highway trips. The on-board trip computer revealed an average of just 7.4L/100km – it’s not often we see real-world experiences being so close to the official rating. Compared with some of the competitors we’ve tested, this is the best real-world result we can remember seeing. 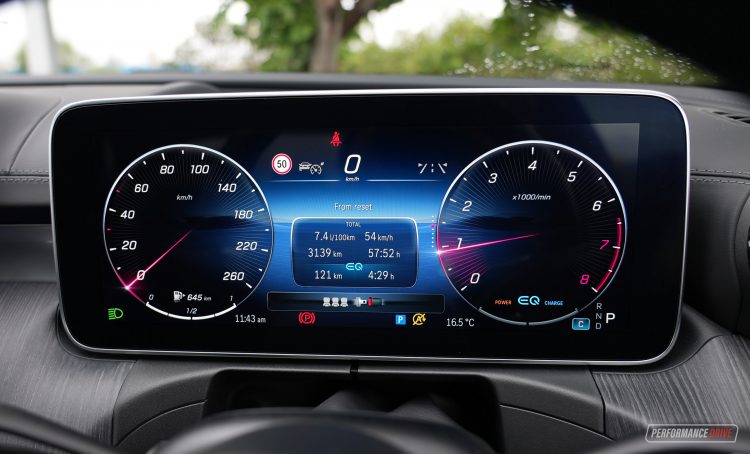 On the road the C 300 feels gutsy yet majestically smooth and effortless. It gets up to speed without any fuss, charging up long steep hills like a car featuring a much bigger-capacity engine. After all, peak torque is available from just 2000rpm. Accompanying the engine is a nine-speed auto. It always finds the right ratio for the situation at hand, and the shifts are rarely felt when driven normally.

Put your foot down and the gear shifts become more sudden and sporty. Particularly in the sport modes. In fact, it’ll often chirp the tyres into second and third gear under full-throttle acceleration when provoked. Speaking of which, we recorded a best 0-100km/h run of 5.95 seconds using a Racelogic Vbox Sport on a private road. That’s plenty quick enough for this style of vehicle and its intended purposes. However, we can’t help but remember the dashing 5.50-second times we’ve recorded in the BMW 330i on the same piece of tarmac. Again, we think the weight is this car’s main weakness in terms of performance and economy. 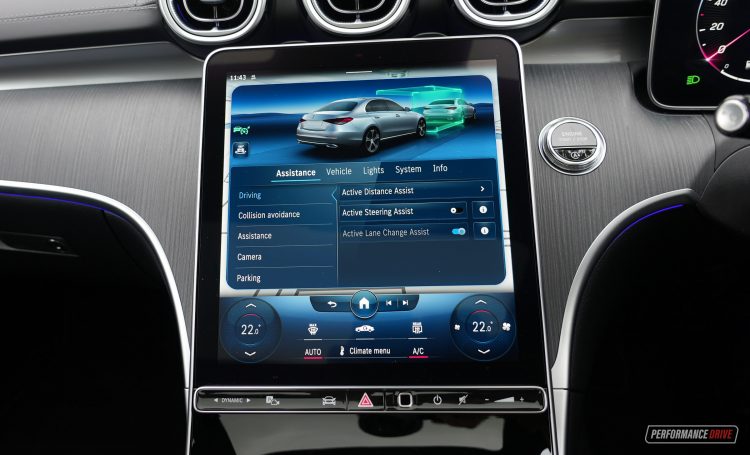 Going for the C 300 gets you a set of 19-inch alloy wheels wearing staggered-width front and rear tyres measuring 225/45 and 255/35. Grip levels are extremely impressive, as you might expect. The steering is sharp and precise, and despite the weight, the car feels really light and nimble at your fingertips. Perhaps most impressive of all is the sense of security and stability. It just sucks to the road and remains rock-solid. There are a plethora of (unintrusive) safety systems on board as well making sure you always remain on the bitumen, upright, and within the lane.

Ride comfort strikes a great balance between sportiness and comfort. There is plenty of compression range so it has no trouble absorbing bigger bumps on patchy country roads, while body roll and unwanted pitching and movement is essentially non-existent. Selecting from a handful of driving modes allows you to set up the car to suit various conditions as well, increasing its overall versatility.

The new-generation C-Class resets the standards for in-car luxury, sophistication and classiness; just one glance of the interior will give you a quick sample of this. It feels expensive and the smooth new exterior looks rich and elegant.

Highlights for us include the svelte mild-hybrid powertrain that offers strong yet effortless progression, and the ride quality walks the fine line between tautness and agility while being capable of offering sheer cruising comfort. It’s a perfect balance.

Our main gripe with the new C 300 is its starting price. It does feel more expensive than many rivals, but not $10k (almost 20k in some cases) more.

CONS:
– Expensive compared with key rivals
– New design can seem universal within the showroom
– Official fuel economy and performance figures do not reset the segment benchmark