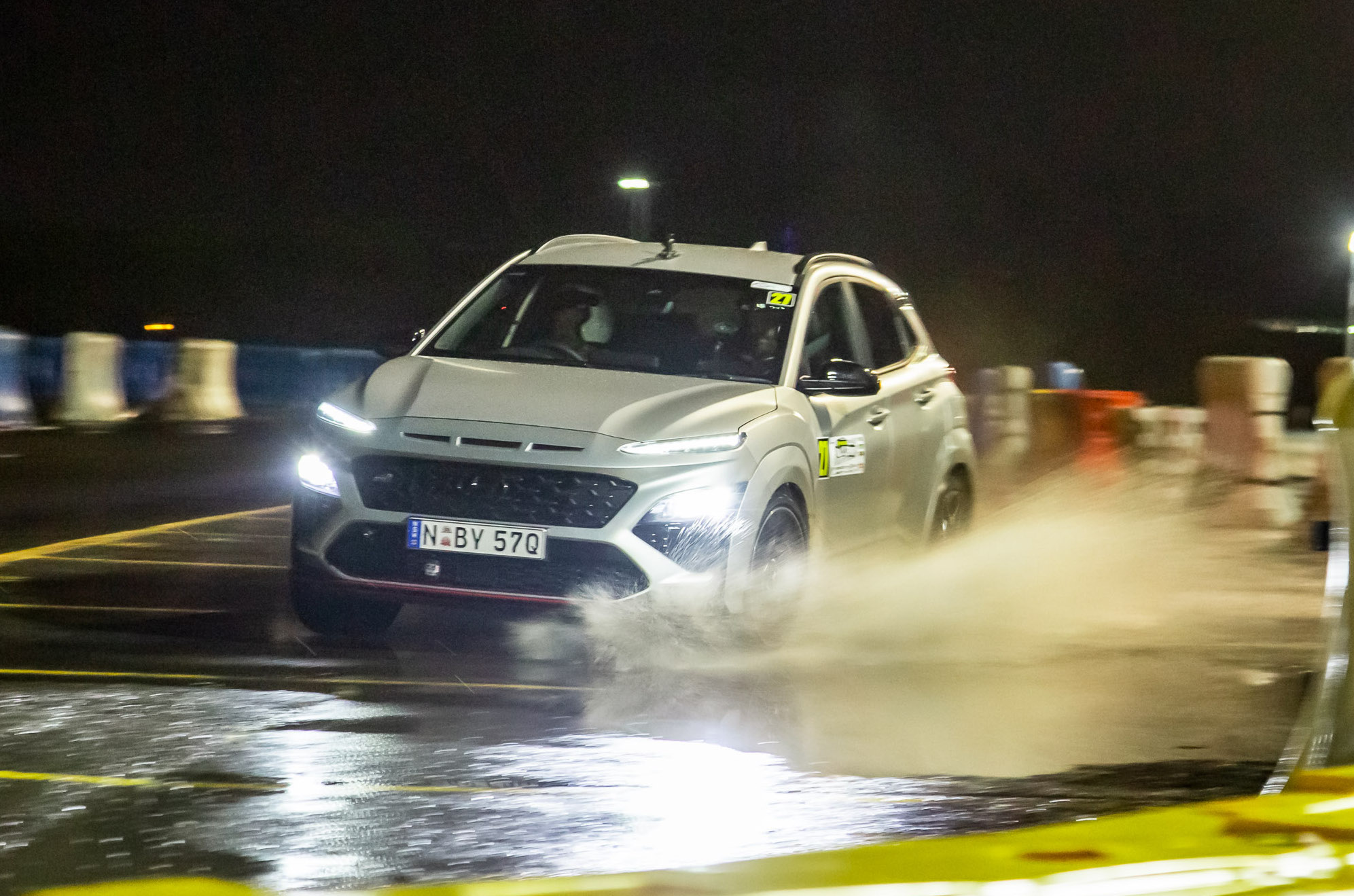 Can you go racing with an SUV? Perhaps more importantly, should you? Well, the new 2022 Hyundai Kona N has all the credentials to show us if it is possible and if an SUV can actually be competitive. 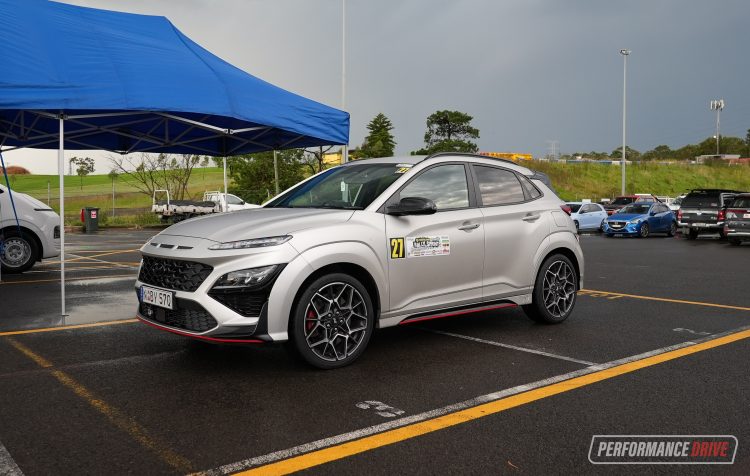 Hyundai Australia kindly invited us to enter one of their Kona N press vehicles into round 3 of the 2022 Whiteline Tarmac Rallysprint series to see how it would shape up against a field of hot hatches, and seriously supped-up Subaru WRXs and a Mitsubishi Evos.

The beauty about these events is that you get one sighting lap of a course that changes with each round, and then it is straight into racing. It’s all timed with official and precise timing gear, with a special receiver attached to the front the car that automatically communicates with signal boxes at the start and finish lines. 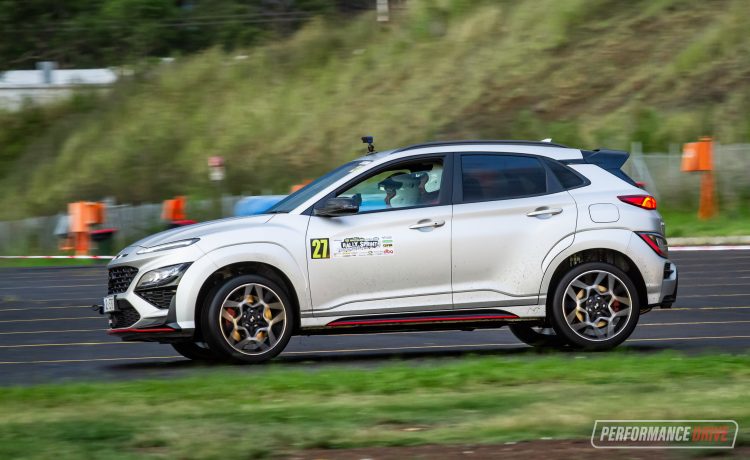 Everyone competes against everyone. There are no official classes or car categories, except 2WD and 4WD. But it doesn’t matter because everyone is on a level playing field. No driver has better knowledge of the track than any other driver, and there are no pace notes.

In this environment we think cars like the Kona N are perfect. Because, firstly, this is a very forgiving and playful vehicle. You can really throw it around thanks to its hot hatch agility and underpinnings. Also, it is a very well sorted vehicle, designed for proper track driving. There is plenty of suspension travel too so you don’t have to worry about scrubbing out on the varied bitumen and wet, sandy-covered sections. 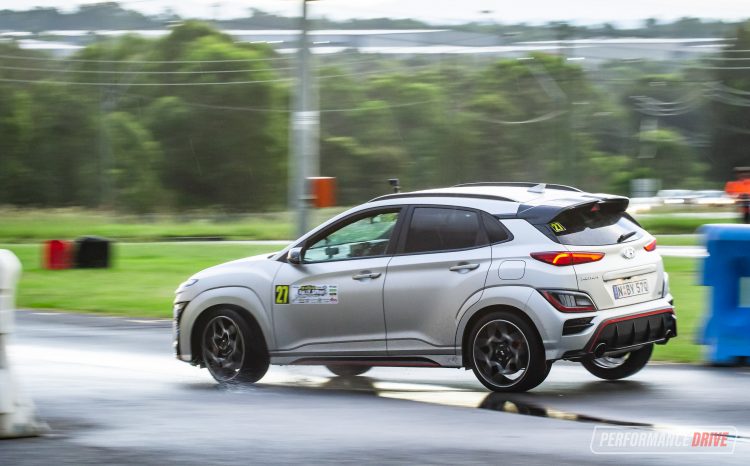 We had four runs, with the first run taking place just as the sun went down and the remainder at night, and in the rain. Again, the fact that the Kona N is so approachable and inviting means weather is not an intimidating factor. You can just press on regardless. The grip levels are insane. It’ll even pop a back wheel in the air around tight corners, in the wet.

So, how did we go? It is fun playing around with all of the drive modes and settings, but in all honesty, we’re not sure either of the modes make a fundamental difference to lap times. Not on a course like this anyway. 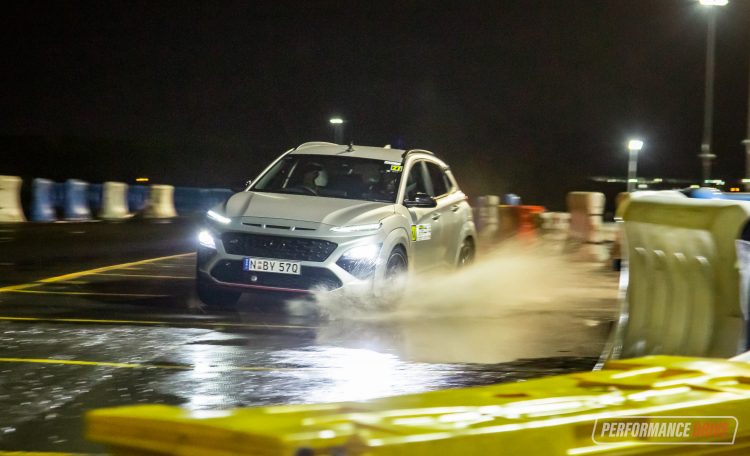 We also tried manual mode but found auto to be easier, simply because some of the corners are so tight that it can be cumbersome reaching around for the paddle shifters. Unfortunately, like most road cars, the paddles are mounted on the steering wheel and not on the steering column.

The best result we scored was 10th position on our final run. That’s out of around 100 entered vehicles. Hyundai had two of its own racing drivers competing, including Josh Buchan in a modified i30 N, and rally ace Brendan Reeves in a stock i30 Sedan N. On that fourth session the mighty Kona was only 2.5 seconds behind Reeves, which is amazing for an SUV. 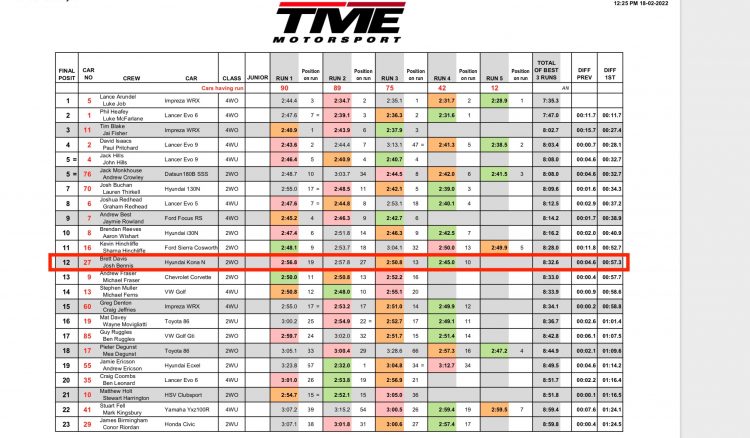 Overall we placed 12th, which, in our books, is absolutely fantastic for an SUV. Keeping in mind many of the competing vehicles were heavily modified, with the top-runners ‘cheating’ with AWD.

Best of all, we drove the Kona home that night and went out and did the shopping the next day in it. It was like it didn’t even go racing. No brake squeaking, bearing fatigue, or any new engine sounds. Nothing. Still like new. 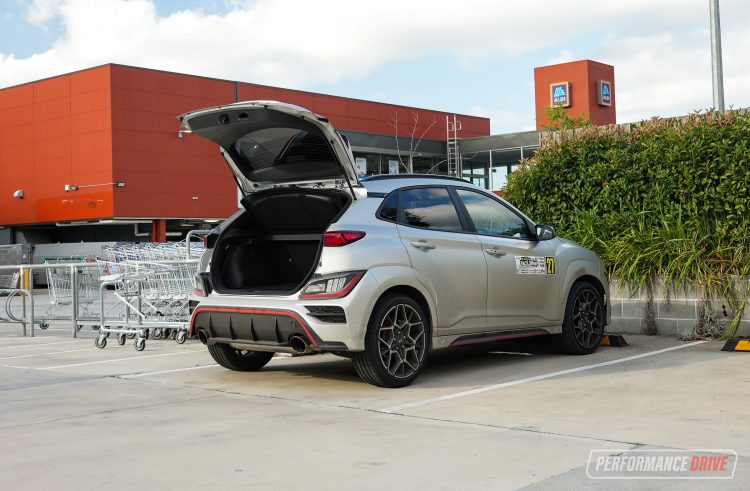 To answer the original question, yes. You can go racing in an SUV. And if you have a Kona N, you certainly should. You’ll raise more than a few eyebrows in the pit paddock and find yourself surprisingly high on the leaderboard. Check out our video below to see how it went. Please excuse the dark footage, and censored swearing.