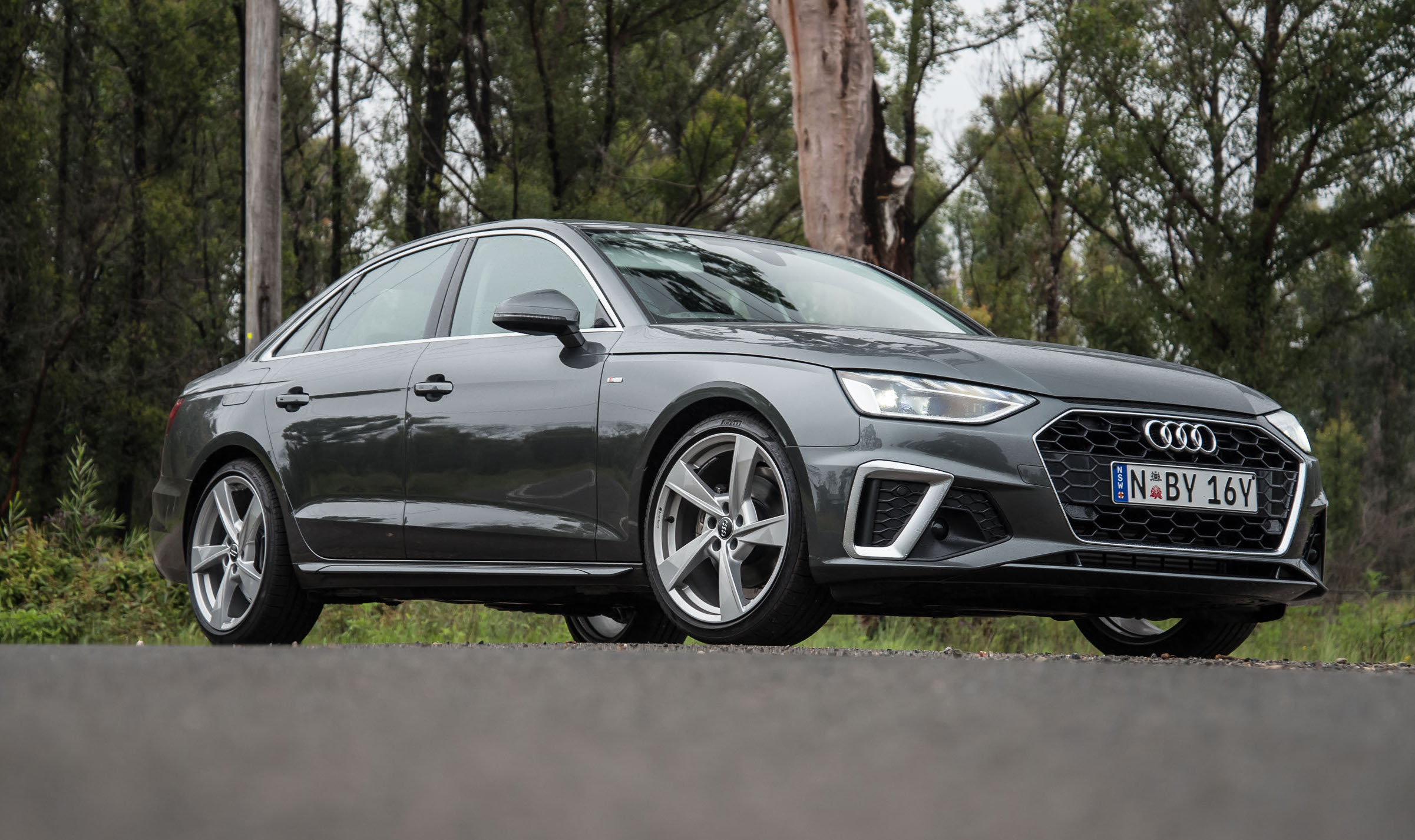 If you’re one of the rare ones that doesn’t want an SUV and instead longs for a traditional yet classy sedan, the 2021 Audi A4 35 TFSI S line could be just the ticket. It’s sleek, very smartly dressed, and presents one of the cleanest cabins we’ve ever seen. 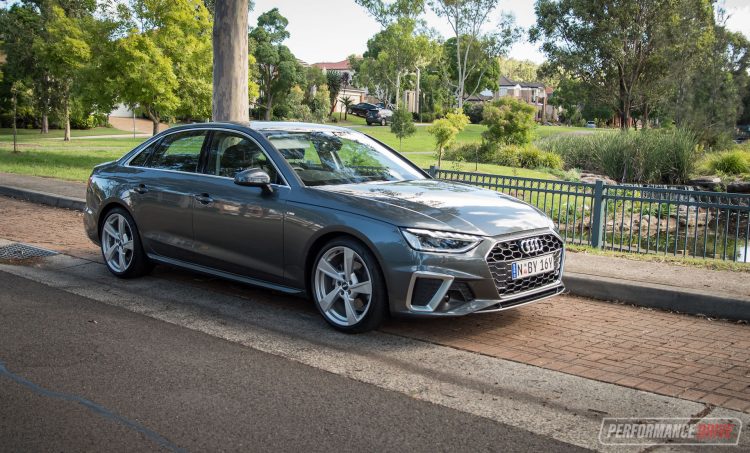 Now in its fifth generation – first launched in 2016 – the 2021 Audi A4 continues on Volkswagen Group’s MLB Evo platform, shared with everything from the Audi A5, A6, A7, A8, and Q5, and even the Porsche Macan. Trim levels span from 35 TFSI, 45 TFSI, to the top S4 performance model.

The 35, which is quite a confusing number as it relates to nothing in particular, is the only one with front-wheel drive while the other two feature Audi’s famous quattro all-wheel drive. The entry model is also available without the S line pack, but it’s standard on the 45 and obviously the S4 gets its own unique sporty flair. 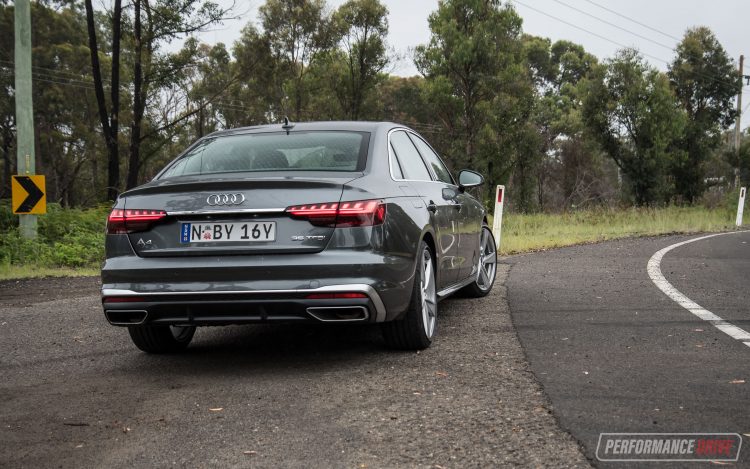 This interior couldn’t be any neater if it tried. Just look at it. It’s so clean you feel like you could eat off it. Audi has always had a knack for creating very orderly and immaculate interiors. But we feel it could become a bit boring after prolonged ownership. Nonetheless, studies have shown tidiness can help alleviate stress and anxiety. So if you’re driving this every day, you should be more relaxed when you get out compared with when you got in. Unless you just stepped out of a day spa facility or something.

We think it is worth going for the S line package even though it does cost an extra $4k. In the past the S line kit was more about exterior enhancements. But now it seems it is more about what it does for the interior. Over and above the base spec, the S line adds these sporty and supportive seats in the front, with power adjustment and extendable under-thigh support sections. Leather is the standard upholstery, which Audi says does contain some man-made sections, while a finer-quality Nappa package is only available as an option on the 45 TFSI and standard on the S4. 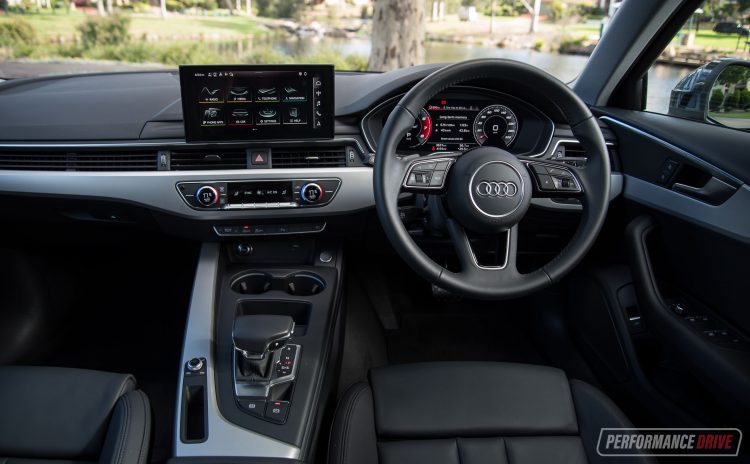 To us, it feels every bit the quality of other premium leathers we’ve experienced in this class. Really though, it’s the unrelenting build quality of all fixtures and furniture that impresses most. Everything feels so solid and precision-fitted. Even the volume knob is a high quality piece of engineering, with its soft clicks reassuring you of its movement. Most of the cabin decor is dark grey, contrasted with brushed and metallic trimmings. You can option for more traditional wood inlays or piano black if you want to ($800).

The S line pack also includes Audi’s Virtual Cockpit Plus driver’s display, incorporating a 12.3-inch digital screen that offers configurable display themes, including a full map, twin gauges, and various vehicle and trip info. The graphics are pin-sharp, and it doesn’t take too long to understand how you navigate around the screen, using buttons on the steering wheel. 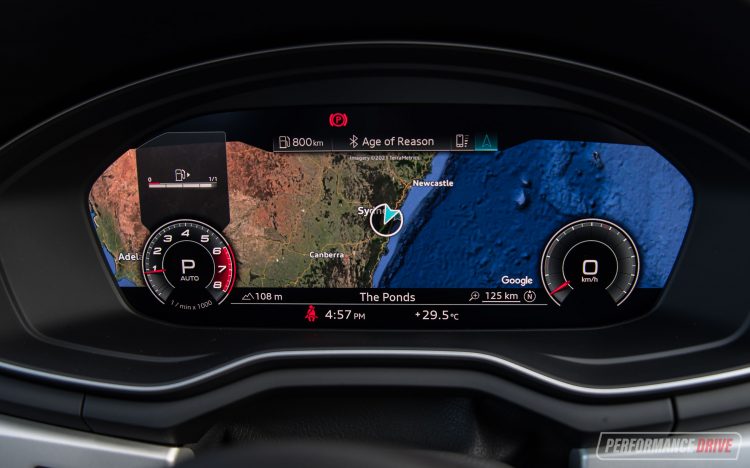 Up on the dash is a 10.1-inch infotainment screen running MMI Navigation Plus, which is standard across the board. The screen is getting towards the smaller end of the spectrum in today’s market, but again, the graphics are really crisp and its operation is quick to fathom. We like the simple grid style menu layout, and the way core menus are lined up against the edge on the driver’s side, with a home button at the top.

Passenger space and storage in the front is very good. Two cup holders are nicely sized in the console, and there’s a handy centre console tray under the armrest with a wireless phone charging pad as standard. Just in front of the gear shifter is an almost perfectly square dish. At first we judged it as an after-thought; something the designers put in at the last minute because there was space leftover. However, it’s actually very convenient as this is the spot you can place random items like business cards or receipts or even secondary keys. Don’t let it get too messy though otherwise you’ll spoil the neatness. 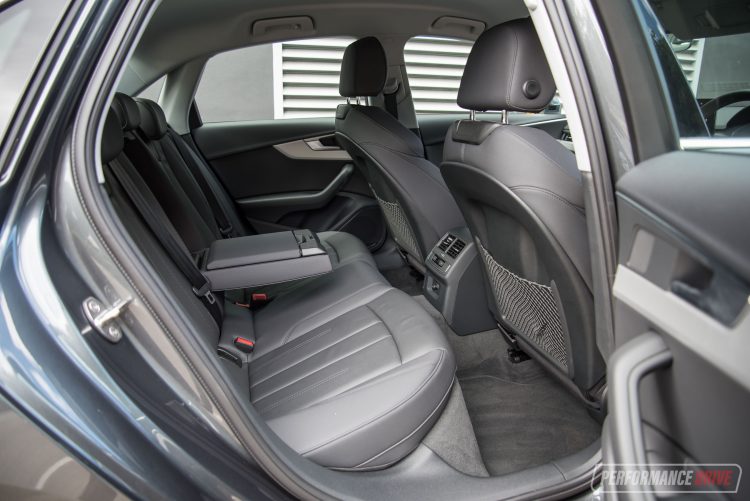 Rear passengers are provided climate vents in the back of the centre and separate temperature control, as standard across the board. This is great to see as premium brands usually like to charge extra for this. There are no USB or USB-C charging ports in the back, although there is a 12V socket which could easily be converted with an adaptor. Legroom is a bit tight, or only just average for this class. There is a big transmission tunnel sapping a lot of centre seat space, too. Headroom is more than acceptable, and thanks to the clean and open layout in general you do experience a sense of spaciousness.

As for carting around luggage, the A4 35 TFSI presents a 460-litre boot. That’s about average for the class as well, considering the 3 Series offers 480L and the Mercedes C-Class offers between 435-455L, depending on the variant. Some side pockets and a tie-down net help to keep smaller items from bouncing around. 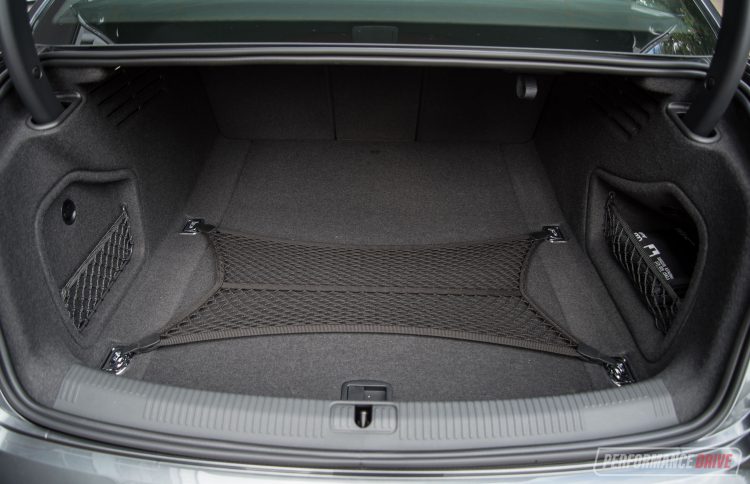 The 35 TFSI badge relates to the engine output, but not directly. It simply refers to its standing in the lineup hierarchy. In other words, 35 is always going to be near or at the bottom of any model in Audi’s range. 45 is a bit more serious, and anything with 55 on it means business. There’s also even numbers for the diesels; 40 TDI, 50 TDI and so on. Confused? Join the club.

Regardless of the badge this model is powered by a 2.0-litre turbo-petrol four-cylinder engine that develops a rather weak 110kW and 270Nm. It’s essentially an engine from the A3 or even a VW Golf, and in the A4, it is one of the least powerful engines in its class. Again, to refer to the key German rivals, the base 320i develops 135kW and the C 200 generates 150kW.

Does it matter? No. It does not. During our usual testing we clocked 0-100km/h in 8.52 seconds, which is not bad at all for a base powertrain. Even compared with the last vehicle review we published just yesterday, the MG ZST (not in the same segment, obviously). It features a 115kW engine and weighs just 1295kg, with the sprint coming up in 9.62 seconds in our tests. This weighs 1610kg and has less power and yet it is significantly quicker. That’s the precise German engineering at work. 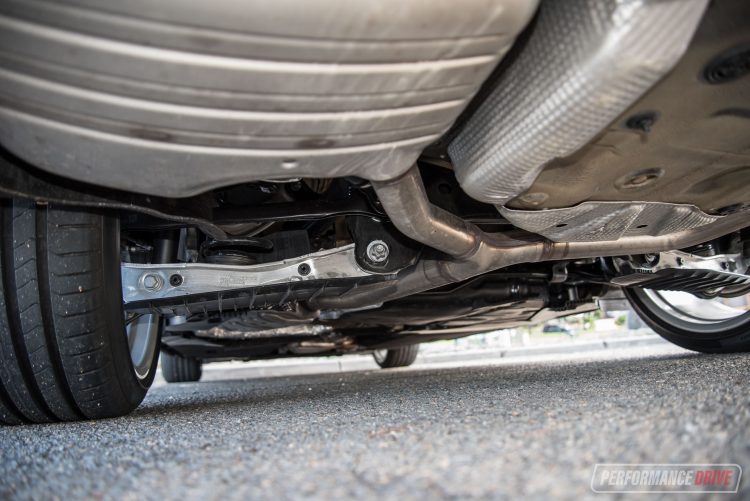 If you want outright speed and power you can always move up to the 45 TFSI or the cracking S4 anyway. But we think this little package does more than suffice for its intended purpose. And it is quite economical. The official average is just 6.1L/100km. Although we achieved 8.3L/100km during our week, this did include performance testing. We saw the trip computer drop down to 7.0L/100km with some highway use, and we reckon it’d probably hover around that after extended use in non-testing conditions.

Being front-wheel drive this is the lightest-weight A4 in the range. Driving on slippery surfaces, such as on snow and even very wet roads, complete confidence and control isn’t quite at the level all-wheel drive can provide. But during our test we were surprised just how well this car handles, even in damp conditions. 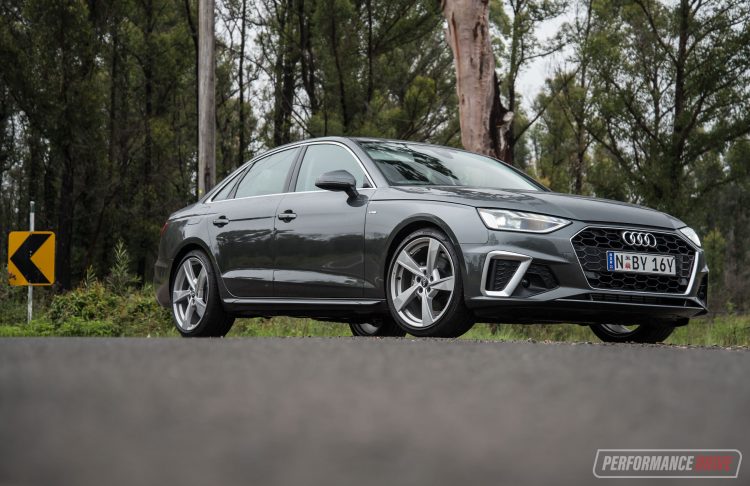 Firstly, Audi has fit 245/35 Pirelli P-Zero tyres as standard. These supply unbelievable amounts of grip, and at 245-wide, they are fat. Secondly, the MLB Evo platform is extremely rigid, providing utter stability and control even when you really try to throw it around. The weakest part of the handling would have to be the steering. And it’s not that weak.

Initial turn-in is fairly emotionless, and you aren’t completely sure what the outfit is doing. This is good as it means that for most of the drive, it is relaxing because you’re not reminded of every single road surface change and body movement. It’s not until you start to push it beyond around 50 per cent that the underlying chassis comes alive and wants to play.

Interestingly, all models in Australia come with sports suspension and a lowered ride height by 20mm. This, no doubt, contributes to the handling prowess when you’re pushing hard. What many buyers will appreciate about this suspension setup though is the ride quality. Although it is a sports setup, bumps and road imperfections are not sent through to your spine. It is a lovely ride. Somewhat taut and tensioned, yes. But not intrusively so.

Our only complaint with this car is that it can seem eventless and sterile compared with the rivals. For example, in the Lexus IS you can interact with the striking exterior design (love or hate) and the challenging infotainment pad, while the 3 Series is a driver’s paradise, and the C-Class is very fancy and carries a lot of brand cache. Whereas the Audi just does the job, straight-cut and no fuss. But that might be exactly what you want. It’s like a freshly pressed suit; very professional and highly respected.

There’s no need to be worried about keeping up with the Jones’s if you do go for the base model, as most people won’t even know what 35 TFSI means. But more importantly, this engine provides adequate performance for a wide range of real-world circumstances. And it can offer exceptional fuel economy if you aren’t too harsh on the throttle.

PROS:
– Super clean and tidy interior design
– Excellent handling and road-holding for a FWD
– Crisp digital instrument cluster as standard
– Price; it’s one of the most affordable in the class