There are a lot of vehicles in this market segment that are very similar, and even look the same. But the 2020 Jaguar XE stands out with a certain British charm. However, the company has pruned the lineup to just one main variant; the P300. Could this be a signal for an all-new model on the horizon? There’s also been reports that Jaguar might not reintroduce an all-new version at all, and instead blend the XE and XF into a one-size-sedan-fits-all. 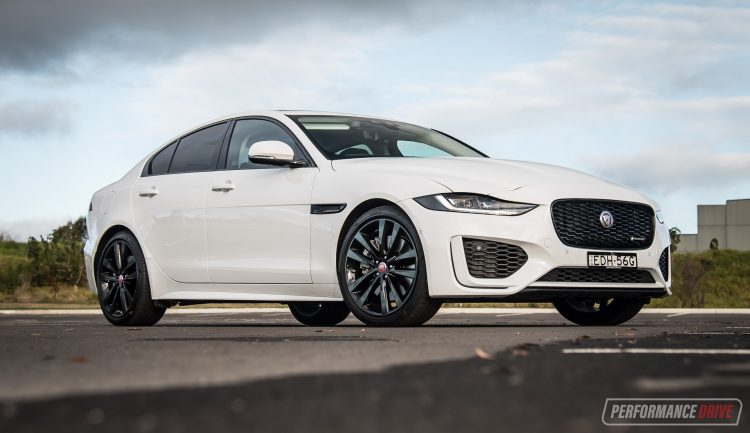 Either way, the company seems to have found the optimum balance by going with the sole P300 engine. The 2.0-litre turbo-petrol four-cylinder develops a lively 221kW (the name refers to 300PS), and a strong 400Nm. Both of these figures are impressive for a 2.0L, yet they also coincide with good fuel economy, certified by an official consumption average of just 6.7L/100km.

In Australia the 2020 XE is only available as the P300 R-Dynamic. Buyers then have a choice of SE and HSE trim levels. Prices kick off from $65,670 for the SE, and from $71,940 for the bounteously-equipped HSE (excluding on-roads). Compared with the key European rivals, Jaguar’s starting prices, particularly the SE, are very appealing considering the equipment and powertrain caliber. 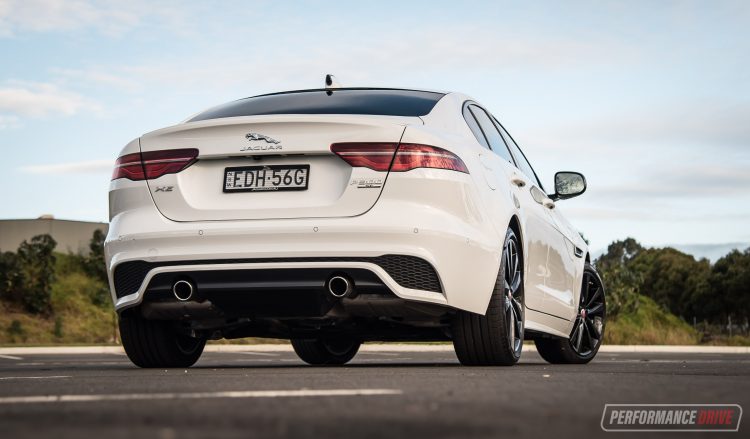 Resisting the HSE isn’t such a bad move. The SE comes with ample equipment and luxury for this class. The dash showcases Jaguar’s latest 10-inch touch-screen media interface running a system called Touch Pro, while the HSE adds Touch Pro Duo which is a second screen for the climate control. Although the Duo setup is very elegant, Jaguar has updated the dash layout for the 2020 XE to incorporate a nicer climate control panel as standard.

The SE makes do with a six-speaker sound system as well, leaving the HSE with a more satisfying 11-speaker unit by Meridian. Aside from those features, the SE still contains heaps; Android Auto and Apple CarPlay and Jaguar’s own InControl apps, sat-nav with traffic sign recognition, and digital radio. Strangely, a surround-view camera system is a $360 extra on both the SE and HSE. 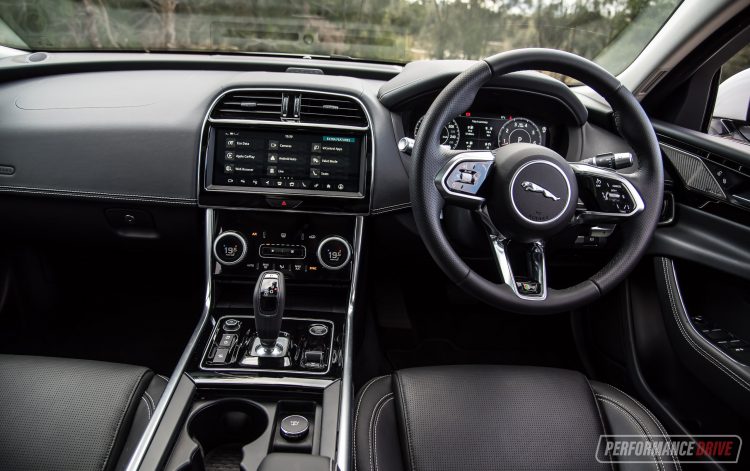 For the driver there’s a fully digital instrument cluster with configurable displays. The functionality of the configurations is a bit fiddly as it requires the use of a compass-style arrow button composition on the steering wheel, with the up arrow, oddly, being the back/exit path. It doesn’t take long to get used to but we think there is some room for improvement.

Both screens show off really crisp graphics and subtle yet sophisticated colour combinations. We like the horizontal swipe layout for the main screen and simplicity of the grid layout for the apps. The instrument cluster is also really easy to read, and you can configure the inner section to display trip data or a map or even a basic screen so you can focus on the essentials. 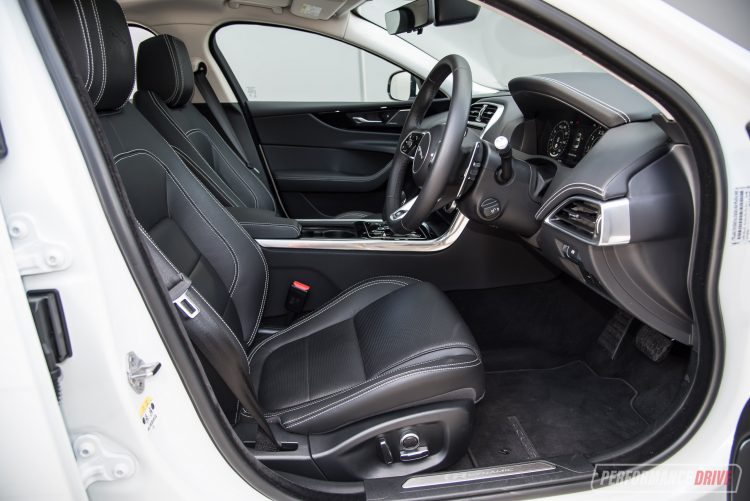 Passenger space in the front is commendable for this class. Aside from a low-swooping A-pillar, which can require dodging when you first get in, it feels fairly open and airy, albeit submerged and sporty. There’s a decent centre console arm rest and storage underneath, with twin cup holders. A wireless phone charging pad can be optioned for $180. Head-up display is also a $1300 option on both the SE and HSE.

In the back, passengers are unlikely to complain, in respect to the rivals. Legroom is okay and there’s a handy flip-down arm rest from the centre seat, with cup holders adding convenience. The driveline tunnel does protrude quite a bit in the middle, but it’s nothing out of the ordinary for this segment. Headroom is respectable too, but again, you do have to crouch down to clear the low roofline. 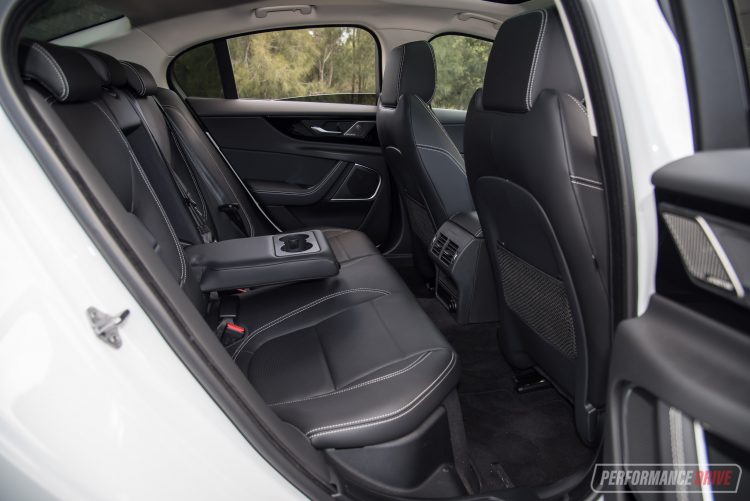 Cargo volume is measured at 410 litres, which is a bit behind the class standards. Many of the German rivals present around 480L. However, that’s not to say there isn’t enough room. It’ll easily accommodate the average business trip or shopping expedition.

It seems 2.0-litre turbo engines are a dime-a-dozen these days. Every car has one or is offered with one. There are some obvious reasons for it. This engine configuration comprises four 500cc combustion chambers, which is regarded for providing a good balance between combustion energy, flexibility and durability – a bit like the common 3.0-litre six-cylinder layouts that have been in use for decades. While some 2.0L units are tuned for economy and some are developed for outright performance, the P300 promises both.

It’ll deliver 400Nm of torque, which is rather substantial for this engine category, between just 1500-4500rpm. On the road it means the P300 doesn’t need to constantly rev and fuss about to get the job done. In fact, it’ll effortlessly propel the 1523kg XE up to highway speeds, and sometimes over them without you even meaning to. 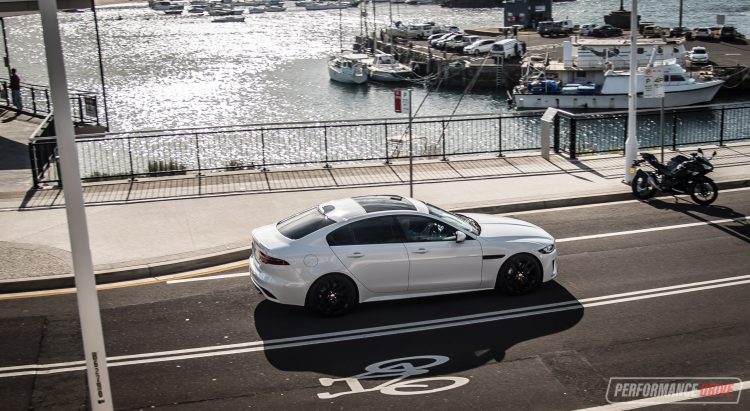 Across the standard 0-100km/h sprint Jaguar claims the P300 will take 6.5 seconds. We saw an improvement on that during our Vbox testing, with a best result of 6.38 seconds. It’s swift, however, we have seen the BMW 330i, which is lighter weight but 30kW behind, do the run in just 5.51 seconds. We can only assume the difference is down to gearing and the weight.

On the topic of gearing, the XE uses a ZF-based 8HP automatic transmission. It’s very similar to the gearbox Alfa Romeo and BMW employ for their mid-size sedans. On closer inspection, the XE adopts a 3.42:1 final drive ratio against the 330i’s 2.813:1. All forward ratios are also different, except sixth gear in both the XE and 330i is a straight-through 1:1 drive.

Why are we talking so much about ratios? Well, the XE likes to jump up into the higher gears as soon as it can, which we find a little irregular and annoying. For example, driving in the suburbs and making a right-angle turn into a street, the transmission seems reluctant to automatically shift down to second gear. Instead, it’ll try to remain in third. And then when you start to apply a normal amount of throttle, there’s a noticeable sluggishness as the four-pot tries to surge through third gear. This often prompts you to push the accelerator a bit harder. That then causes the auto to abruptly shift down into second, but by then it’s too late. 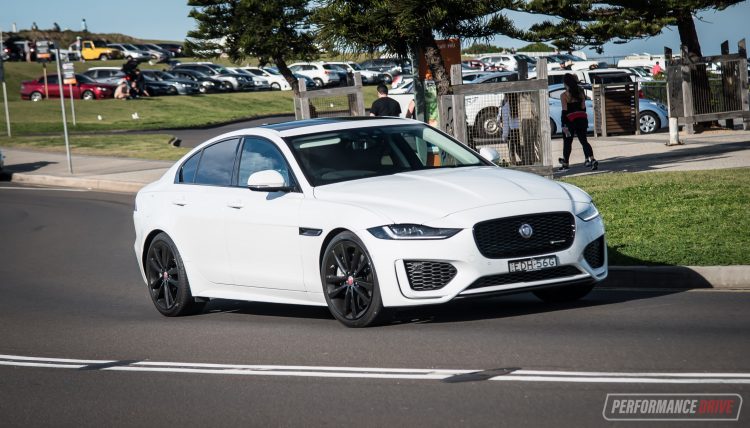 Unless you drive with complete placidness and have no urgency whatsoever, the overall experience in this particular scenario is not as smooth and relaxing as one might hope from a luxury sedan. In other sedans in this class, in the same scenario, the transmission will automatically shift down as you make a turn, allowing you to gradually apply power and build back up to speed progressively and smoothly. Obviously you can just flick the downshift paddle manually in the XE, or spin the gear selector around into S mode and it’s all fixed. But that does put the vehicle into a higher tempo frame of mind, which isn’t exactly suited to quiet suburban driving.

Getting out of the suburbs though, the XE P300 loves to cruise on the highway. There’s enough grunt in reserve for overtaking, and the transmission is more than happy to supply the optimum ratio to facilitate such manoeuvres. Minimal engine revs are required to maintain 100km/h or 110km/h as well. It’s relaxing and comfortable.

When the time comes for a spirited blast up the mountain, the XE really shines. The aluminium-intensive platform that underpins the XE is very rigid, providing a direct and highly engaging feel, which is amplified the harder you push it. We couldn’t find any understeer during our test. Instead, the nose points wherever you demand, and the steering communicates all feedback immediately and consistently. 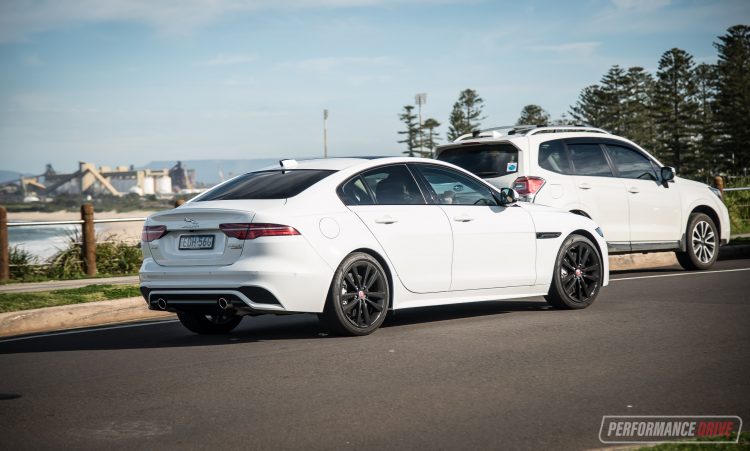 Jaguar vehicles are often regarded for their high quality ride. And the same can be said of the XE, especially compared with some market contenders. There is a hint of body roll, but this is what you want in a road car. It essentially means you can move the weight around and effectively lob it into corners. Obviously the main benefit of suspension travel is its ability to catch and absorb road imperfections.

This is particularly important during sporty driving on backroads or rough country roads. There is no bump-steer or even mild directional disruption caused by bumps in this. Rushing down a mountain road, we encountered various dips and sudden rises during testing to see how it would cope. And it coped wonderfully. It always feels planted and in complete control.

As for fuel economy, we averaged 9.7L/100km during our week. That’s not the best, we know. But considering the power level and that our week of driving consisted of performance testing and other non-measured energetic stints, you could expect a lower real-world figure with long-term ownership. The official average is 6.7L/100km, as mentioned.

We love that the XE is something different to the somewhat conservative German rivals. The fact the P300 is the most powerful 2.0L turbo in its class also provides some bragging rights. The handling is super-engaging and you can immediately tell a proper driving enthusiast has heavily influenced the engineering and development of the overall dynamics.

It is a shame there is no more supercharged V6 option, but in saying that, the P300 will serve up enough excitement and thrills to satisfy most buyers in this market. Think of it as like hot hatch thrills wrapped up in an executive suit.

While the initial value for money, especially for the SE, is attractive, some now-fundamental features have been omitted and reserved for the options list; head-up display, wireless phone charging, and adaptive cruise control are now a regular thing in even the most humble of hatchbacks. Yet here they are optional extras. However, some of these options are quite affordable and even if selected the overall price can still fall below the front-running German rivals.

The XE is now five years old and some areas, such as some of the interior fixtures and buttons, show mild signs of age. We are eagerly looking forward to what Jaguar does next for this class. In the meantime though the XE continues as an outstanding all-rounder. You should be attracted to it, physically, but also by its enjoyable driving manners and distinctive elegance.

CONS:
– Auto transmission calibration seems off at low speeds
– Decent value but still many options that strip it back
– No more supercharged V6 option for 2020