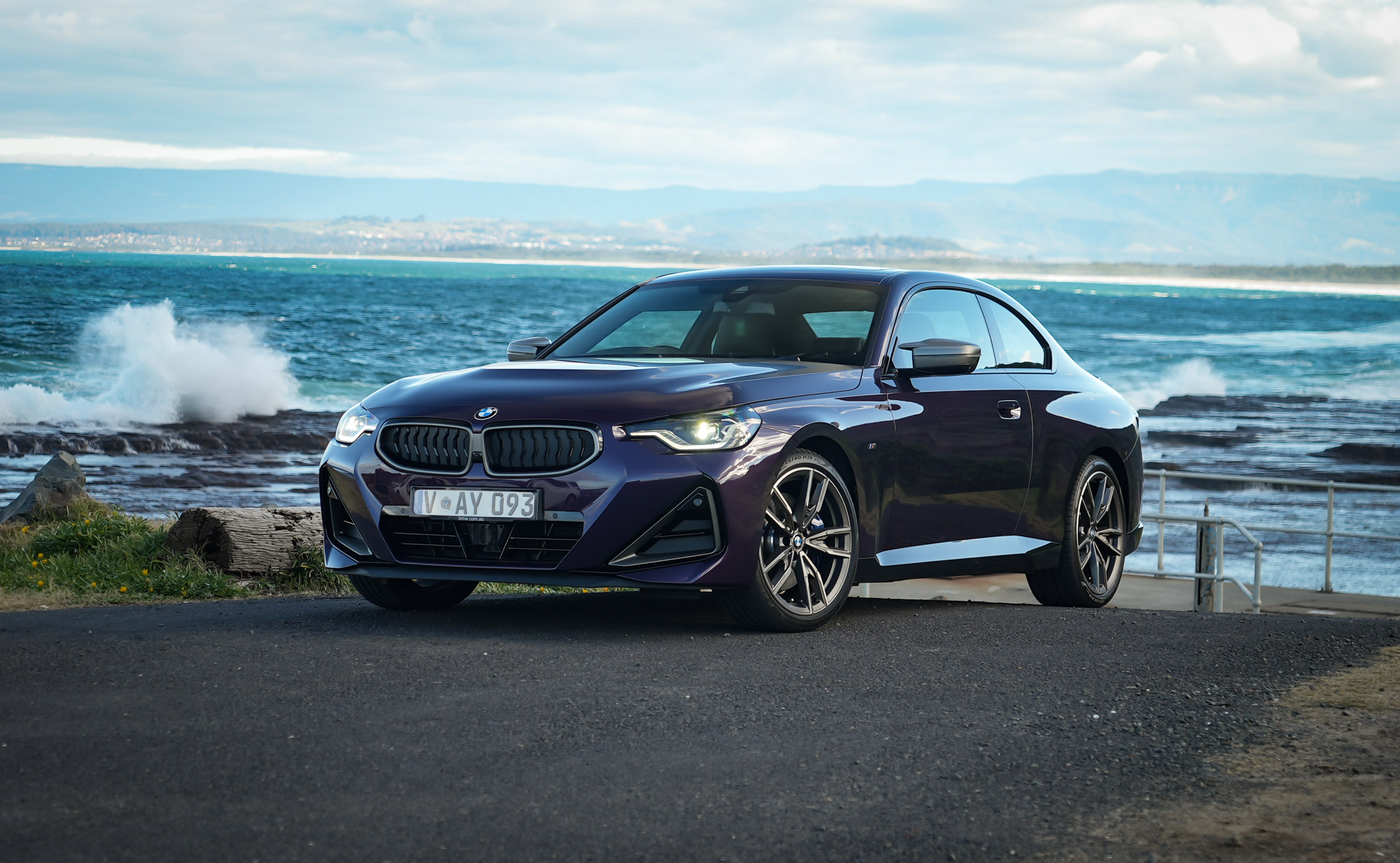 What a little machine this is. It’s the new BMW M240i xDrive. You could think of it as a miniature BMW M4, offering focussed and engaging driving dynamics, neat coupe proportions and a potent engine up front. It is no longer rear-wheel drive, instead coming in all-wheel drive form only now. That drastically improves cross-country performance but does it spoil some of the fun traditionally available in this model line? 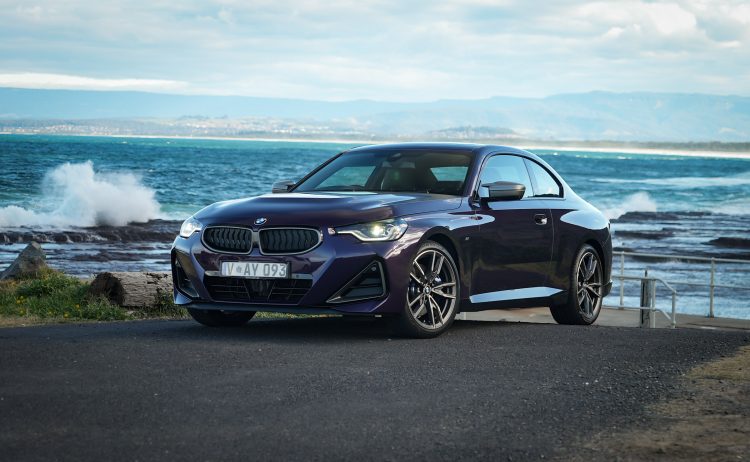 In that sense the new model has become more grown-up than ever before. But completely sensible it is not. Because, despite its petite proportions, the bonnet conceals one of the greatest engines currently on the market (in our opinion). It’s the B58 3.0-litre turbo inline-six from various ‘M40i’ models, and the latest Toyota GR Supra. Power is turned up to 285kW, from 250kW before, and torque peaks at a chunky 500Nm (same as the old model). An eight-speed auto comes standard with no option for a manual.

No other sports coupe on the market offers a similar recipe in this price range aside from the Supra. That makes it quite a unique package, especially if you compare it to the front-wheel-drive-based German super hatch rivals, such as the Audi RS 3 and Mercedes-AMG A 45 S.

With more tech on board and all-wheel drive, it is inevitable that prices climb for a new-generation model. This starts from $89,900, which is exactly $8000 more than the RWD predecessor. We think it is decent value nonetheless. Again, considering the additional running gear underneath, extra power, and bonus luxury and technology inside. And, in today’s market where everything seems to be skyrocketing, the price remains relatively stable. 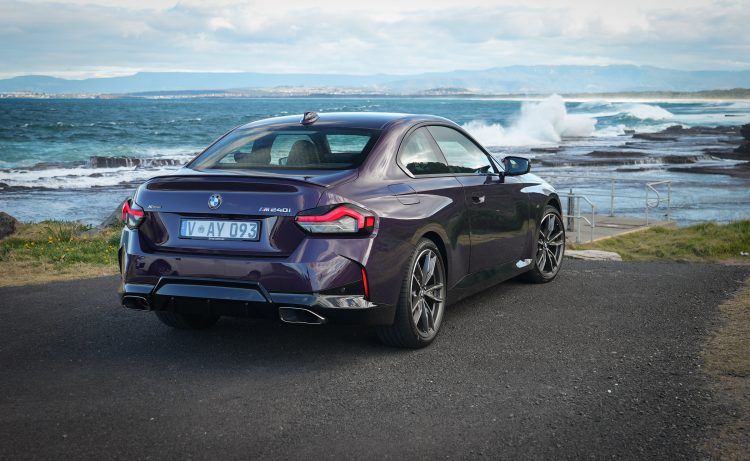 Based on the new 2 Series, the M240i jumps to BMW’s CLAR platform. Even though it looks a bit smaller and cuter than the old model, it’s actually a fair bit bigger. Specifically, it is 94mm longer, 64mm wider, with a wheelbase that stretches 51mm further. Interestingly, the coupe is 4mm lower in roof height, so it’s sleeker than before as well.

We’re not sure about the taillight design, as it looks a bit odd in our opinion, but we love the muscly wheel arches, and the front end is neat and tidy in a traditional BMW kind of way. It stands out on the road as something special, and thankfully BMW has not implemented its awkward big grilles in the front end. These, now wider front grilles are fully adaptive, opening and closing to suit either aerodynamic efficiency or to provide thermal support, depending on the demands. 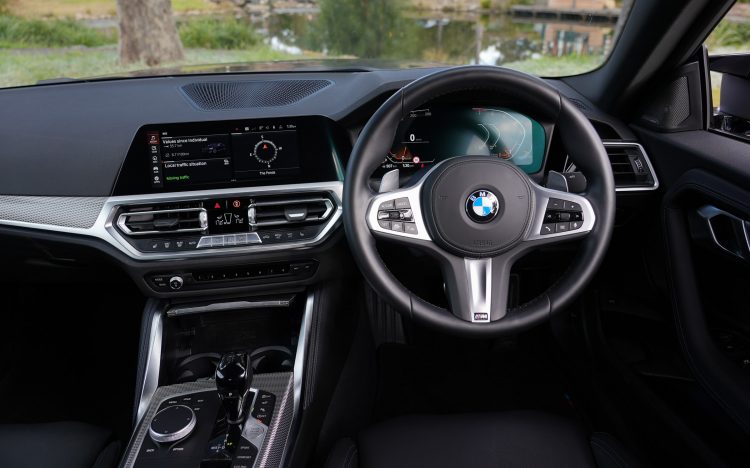 Taking a look inside, the cabin presents a good mixture of luxury and sportiness. It’s not over the top in terms of design in our opinion. But rather calm and reserved. It does miss out on BMW’s latest 8.0 operating system though, making do with the outgoing setup. However, we quite like its operation and functionality. The buttons and menus are all clearly marked and easy to find, and the media interface is packed with all of the modern apps like digital radio, Android Auto and Apple CarPlay, and sends audio through a 14-speaker premium sound system. A wireless phone charger comes standard.

Passenger space in the front seems about the same as the old model, with decent headroom and legroom on offer and a low-set driving position. Practicality is also observed with plenty of storage pockets and cubby holes around the place, and BMW’s typically massive door pockets carry over from past models. Probably the only aspect regarding practicality you need to be concerned about is the access height. This is a sports car, after all, but you will need to get used to bending down to get in and leg-pressing your way out. 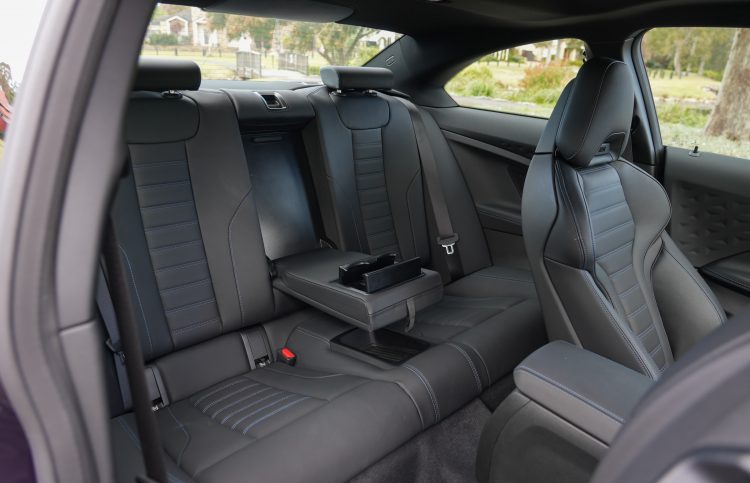 The back seat seems to have shrunk a little bit compared with the old model. We’re not sure if it actually has, but legroom looks and feels a bit tighter than before. Headroom isn’t too bad for a two-door coupe of this size, and even compared with much bigger competitors such as the Ford Mustang. It’s great to see not only climate vents but also temperature control in the back, too. There’s even charging ports. Those looking to cart the family around in the M240i might be disappointed to see only two seats are available in the back (as before).

Boot space remains unchanged, at 390 litres, which is about the same as an average-size small hatchback (Hyundai i30 hatch offers 395L). You can fold down the rear seats from tabs just under the rear parcel shelf, opening up a surprisingly long load length and cargo-hauling capability. Essentially, you could easily use the M240i as an everyday vehicle. 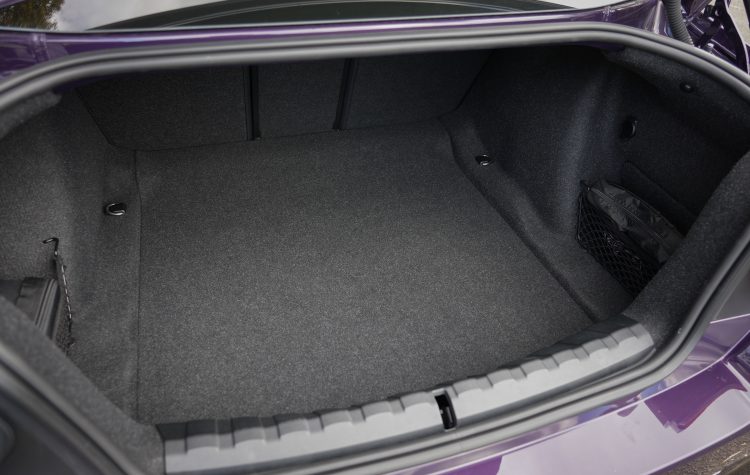 With the new M240i coming standard with xDrive all-wheel drive it means, understandably, it is a lot heavier than the predecessor. We’re talking 200kg heavier in fact, with the specs showing a tare weight of 1658kg for this and a tare weight of 1458kg for the old RWD model. As a result, the power-to-weight ratio is quite similar given the new model has a bit more power, with this calculating at 5.81kg:1kW and the old 250kW model returning a ratio of 5.83kg:1kW.

However, BMW engineers have pulled out another theoretics-defying exercise with the new model. Because, some how, this little coupe is even more agile and keener than ever to tackle corners. The steering is almost too touchy, darting in with very little input. And it holds its line like a train, no doubt thanks to that AWD grip. Across an open country road, with a splash of rain, this new model is far more capable than the previous RWD setup. Seriously, the grip available from the standard Pirelli P-Zero tyres will blow your mind. The tyres are staggered in width, with 225/40 on the front and 255/35 on the back. 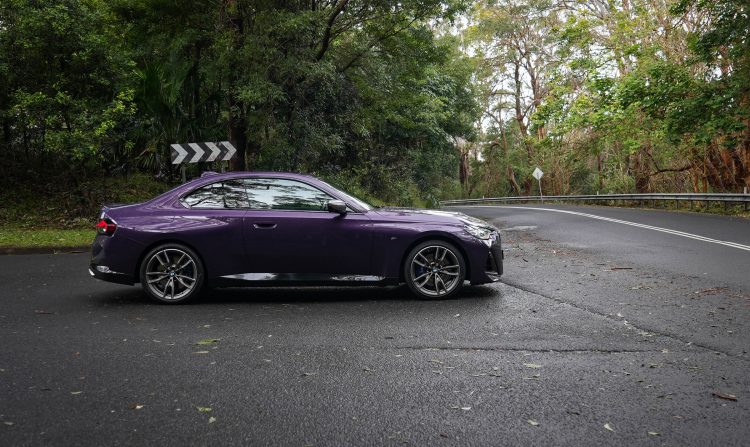 You can now lean on the go pedal and ride that meaty mid-range of torque very early in the bends. There is no anxiety about the possibility of the rear end kicking out sideways. Even in the wet, the new model is relentlessly stable and predictable. Helping here is the new suspension tune. It feels softer than the previous model, with what feels like a wider range of compression. This allows it to absorb nasty mid-corner bumps with less kickback. So with AWD and a superior ability to manage undulations and hidden bumps, cross-country performance is truly remarkable. A wider variety of driver skills levels should be able to explore a wider range of the car’s capabilities, compared with the old model.

Ride comfort is improved as well. You can venture into the city and not have to endure any crashing or banging thuds when encountering road connections and potholes. However, hardcore fans might not be as happy about this new setup when hitting the circuit. Fortunately, adaptive dampers are now standard. And in Sport mode the ride becomes noticeably firm and more focussed. We wouldn’t recommend this setting on anything but a race track, as the default Comfort mode is excellent for regular tarmac surfaces. 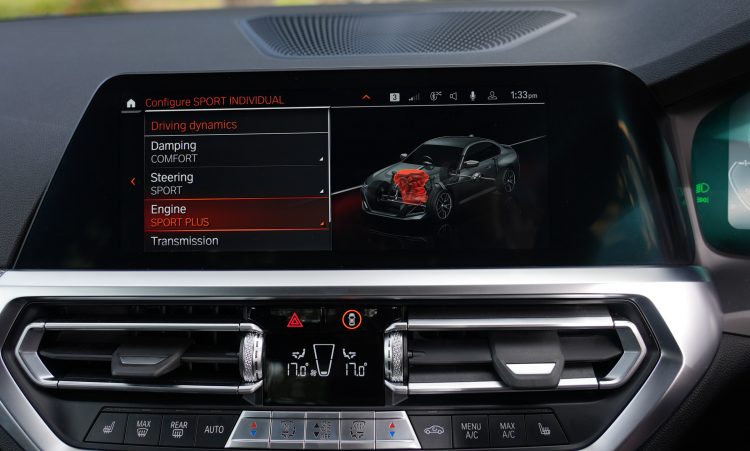 In terms of power, the 3.0-litre turbo provides more than enough push. In almost any gear you get this heavy heaving surge that pulls the car up to speed with no hesitation. It’s like it is driving in a vacuum or down a steep hill. And the engine works perfectly with the ZF-based eight-speed auto. BMW transmission calibration is once again on point here, with smooth shifts and an intuitive intelligence that always seems to know what gear is best for any given situation. For example, turning into side streets. The gearbox automatically downshifts during the turn so it’s ready to exit in a comfortable manner. It does not shift down after you’ve made the turn, like some competitors that use the same fundamental gearbox. We’re not referring to sportiness here, either. This is simply conventional driving in the city.

When it comes to performance driving, the transmission livens up and becomes an athletic companion. Exhaust pops and parps seem to have disappeared with this new model, but it does depend on the revs and what driving mode you’re in. On some occasions you’ll hear an exciting flutter while other times it will silently shift. Either way, the shifts are extremely rapid, including downshifts. Using the paddle-shifters in manual mode also provides another level of engagement and control, complete with auto rev-matching on downshifts. 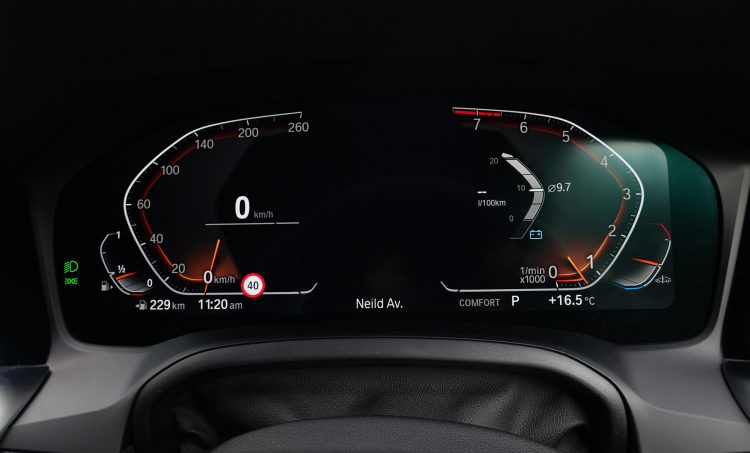 Fuel consumption is rated at a respectable 8.0L/100km on the official combined cycle. For the amount of performance on offer, that’s really good economy we think. In real-world conditions, we averaged 9.7L/100km over a tested distance of 391km. Again, that’s not bad considering this is a factory 4.3-second car. 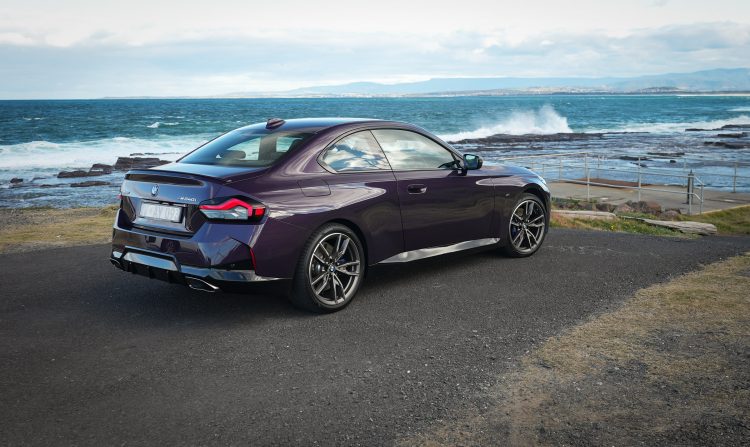 Yes, it is slightly disappointing it is no longer rear-wheel drive, and yes 1658kg is getting quite heavy for a plucky entrant into BMW M’s sports car range. However, with AWD grip and astonishing acceleration and agility, the new model is undoubtedly a greater driver’s car than the one it replaces. More drivers will be able to explore more of what this car can do without becoming intimidated or needing serious motorsport driver training. It is more humble than the old model but at the same time also more capable and a lot faster.

For those wanting something more serious, with hardcore suspension and the possibility of being able to perform tail-out drifting, there’s always the new M2 to look out for. In that sense, we think BMW has purposefully made the new M240i a tad softer and more approachable because it needs to leave room for the mighty M2. That’s not to say you should overlook this. The contrary, actually. The M240i xDrive is a superb intermediate step that will appeal to the majority rather than the minority. It’s a car that can be used by all and enjoyed on a daily basis.

CONS:
– Switch to AWD takes away some of the raw driver’s appeal
– Rear seat seems a bit smaller than before
– Softer ride might not appeal to some, much heavier too (both magnified when pushed hard)