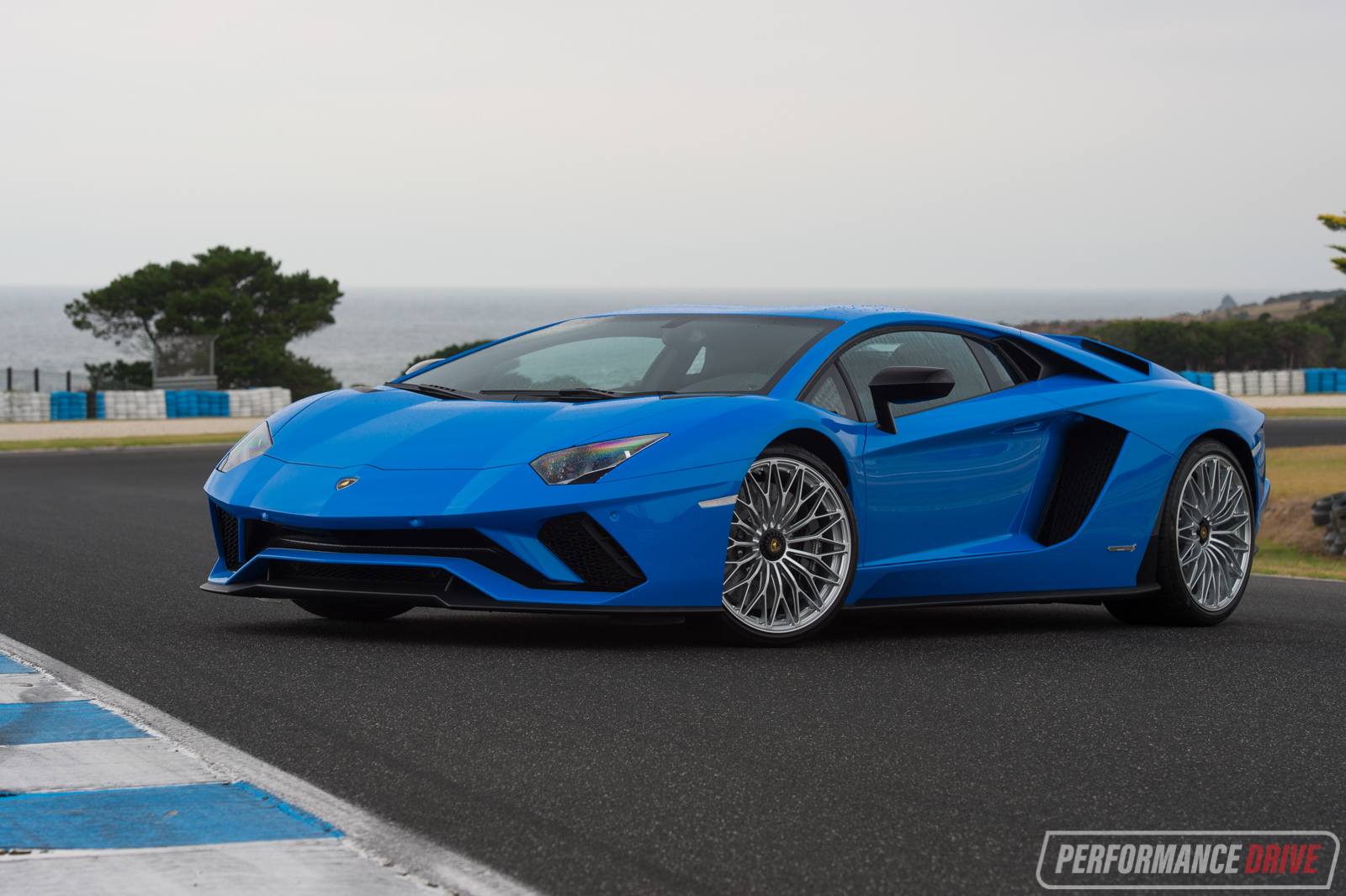 What does the ‘S’ mean? It means “better”, according to Lamborghini. Yes, this is the new Aventador S, or, Aventador Better, and as any Raging Bull aficionado will tell you, the S is always the updated version of the flagship 12-cylinder model. 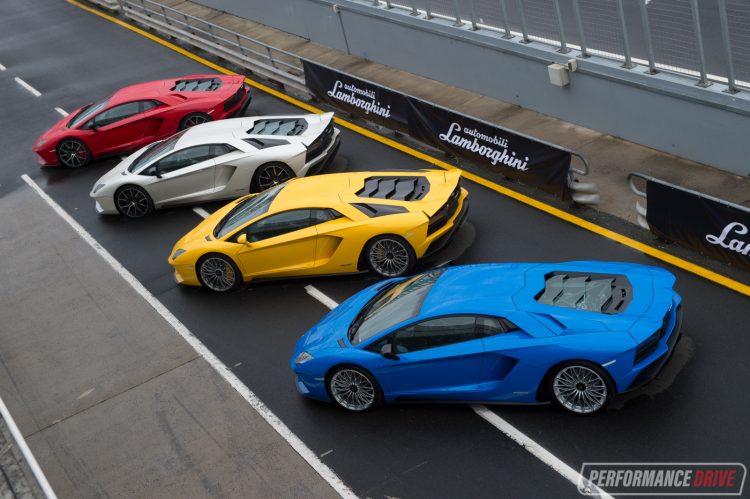 The heritage can be traced back to the Miura S, otherwise known as Lamborghini’s first supercar and the first mid-engined two-seat production car in the world. As a pioneer in this space, the Aventador S is an important step, essentially coming in to carry the torch for the V12 icon. We’re at Phillip Island for the official Australian launch to see how it shapes up and to see if it lives up to the marque’s flagship badge.

Firstly, the main exterior and interior updates are minor. It still looks like Batman’s daily driver, with scissor doors, a shark-inspired front end, and a gorgeously fat posterior. Some changes are made to the lower front bumper bar, with new vertical ‘fangs’ that protrude down, and the rear diffuser is revised so it’s deeper and sucks more air from beneath the car for added downforce. The interior carries over almost the same as before, albeit with some new trimmings and options, a new LCD instrument cluster, and a touch-screen infotainment system is added in to increase practicality. 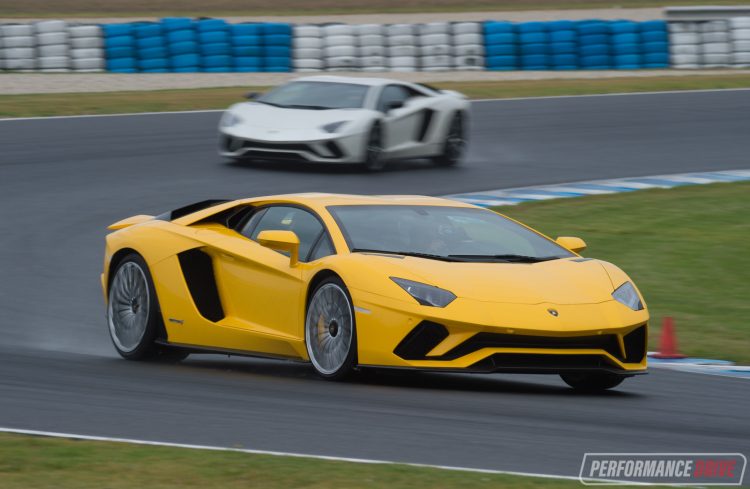 Lamborghini launched the Aventador in 2011, which isn’t actually that long ago for a supercar. But, in today’s world where everything is being updated as quickly as you can order it, Lamborghini is a little behind the game. For example, it’s still using a naturally aspirated engine while the rivals are turning to turbochargers. It also retains an automated-manual transmission using a single clutch and not the more modern twin-clutch setup. Does any of this matter? In our opinion, what really matters is whether it’s a true Lamborghini.

Prerequisites for any Lambo are of course soul and passion. So, that’s something that’s alive and strong in emotion. The first element to meet this criteria is the sound. It has the voice of a god. Lamborghini has given the S a new exhaust system detectable by the triplet of tailpipes feeding into a giant spaceship-like tip. The soundtrack is more refined and consistent compared with the regular Aventador, emitting a progressive whale that turns into a full-bodied rasping scream up high in the revs. 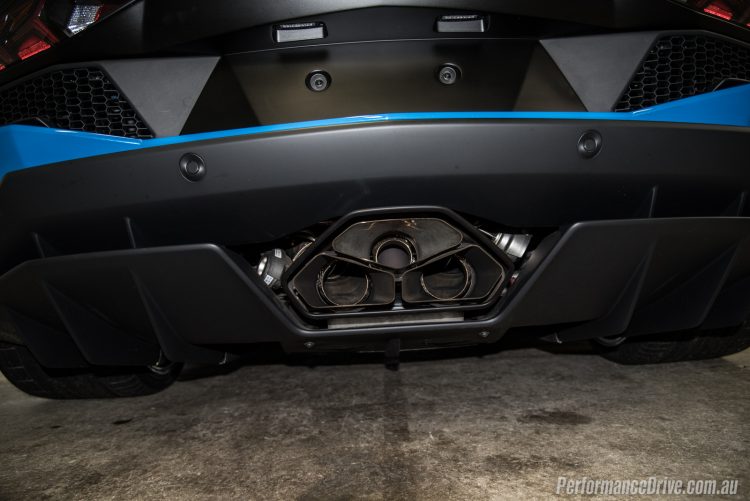 This isn’t just some pipe trickery either. There have been some revisions to the variable valve timing and variable intake to help the engine not only spin more freely, but spin faster and harder. Not that it needed it, the 6.5-litre V12 now creates 544kW, up from 515kW, and the redline is extended from 8250rpm to an ear-tingling 8500rpm. Lamborghini says particular concentration was placed on enriching the torque curve and improving the response of the motor. Has it worked?

It definitely feels more responsive behind the wheel. Existing corners at Phillip Island shows that it’s more eager to get back on the power and get back to acceleration. You only need to feather the pedal to induce mind-blowing forward progression, it’s immediate. Throttle response is still excellent, especially in Corsa (track) mode, but even in Strada (street) mode the engine seems livelier and more anxious. A new ‘Ego’ mode has been added too, giving drivers the ability to mix and match the settings for different areas of the vehicle. 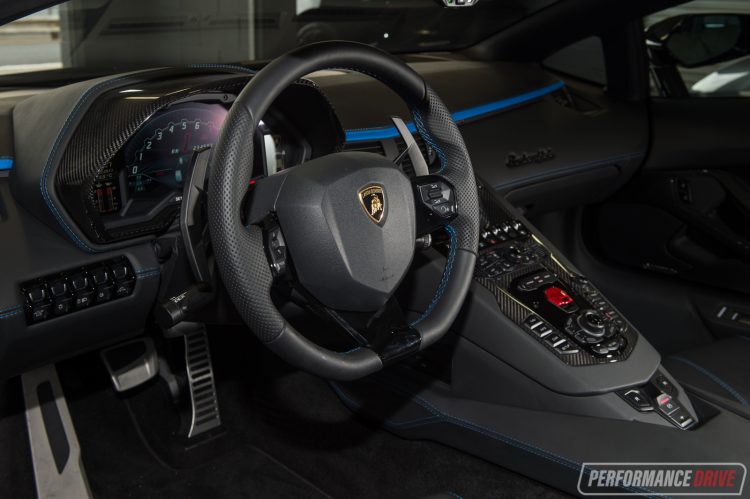 We didn’t get a chance to test the performance figures against the clock but according to Lamborghini the S will cover 0-100km/h in 2.9 seconds, which is the same as the regular model. 0-200km/h is improved though, from 8.9 seconds to 8.8 seconds. Keep your foot hard down and it’ll soar on until 350km/h. About the fastest speed we were able to hit down the main straight was 250km/h, with an instructor in front (no overtaking).

Although there is a decent increase in power, some additional components (outlined in next paragraph) have added weight. To counter this, Lamborghini used more carbon fibre in its construction so in the end the S weighs the same as the non-S, at 1575kg (dry). The power-to-weight ratio is improved.

The second element to meet the criteria is the handling and the way it feels on the road. Lamborghini has debuted an all-new rear-wheel steering system with the S, which helps to virtually shorten the wheelbase by 500mm at low speeds, making it less of a pig in tight situations, and conversely extending the wheelbase by 700mm at speeds above 90km/h, improving stability.

It does this by turning the rear wheels in the opposite direction to the front at low speeds, and then turning them in the same direction as the front at higher speeds. The company says this happens seamlessly. It doesn’t occur precisely at a predetermined speed, but rather in a smooth transition as needed. 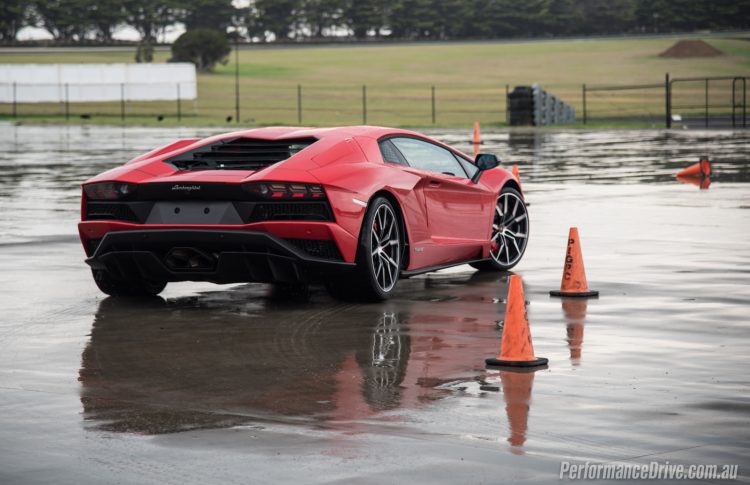 To demonstrate its cleverness, Lamborghini set up a ridiculously tight course on the skid pan incorporating a long snaky S-bend. In short, the car simply would not have been able to do the course without the rear-wheel steering. This was only a slow-speed exercise but it’s easy to see how this would benefit on tight mountain roads, particularly roads with hairpins. Those who will choose to drive their S around the city will also enjoy significantly nimbler maneuverability.

Around Phillip Island it’s perhaps less obvious. The numerous big long sweeping bends at the circuit felt smooth and stable, however, the regular Aventador feels like this anyway in our opinion. It would have been nice to drive the two setups back to back and see some lap times with and without the system. 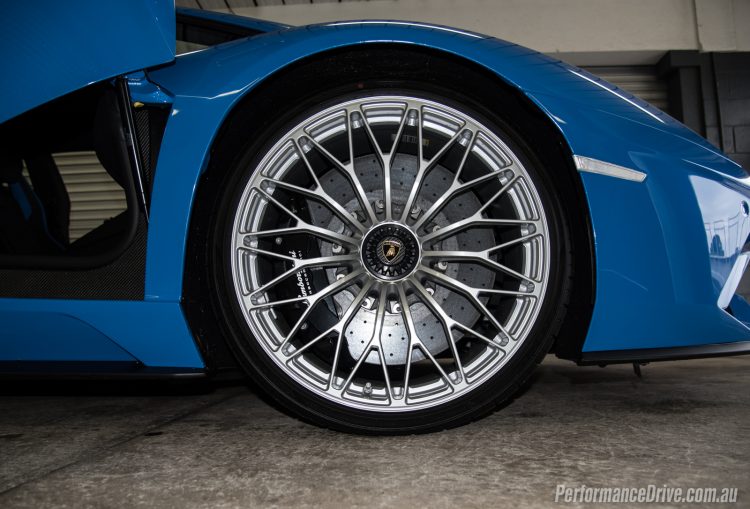 In terms of handling and actual grip, the Aventador S is phenomenal. It features new Pirelli P Zero tyres which were created just for the S through Lamborghini and Pirelli’s historic partnership. Fortunately, there was a bit of rain about, in typical Melbourne fashion. This allowed us to experience the new tyres in poor conditions.

There were no moments of hesitation or lateral slip at all. Part of this is down to the Aventador’s all-wheel drive system which has been tweaked to send more power to the rear axle. Even still, it’s amazing that a car with 544kW on tap can escape from greasy corners so abruptly, screaming up through the gear speeds, grabbing the tarmac and aggressively chucking it out the back.

About the only area we think it falls down is with the single-clutch automated-manual transmission. It is very snappy and it jerks and shunts at low speeds. Lamborghini says a dual-clutch unit would be too heavy for this car, but we can’t help but take a glance at some rivals, such as the Ferrari 812 Superfast and even the mighty Bugatti Chiron and Veyron (built by the same parent company as Lamborghini), and think there must be a way for engineers to work one in. Sure, there is a certain amount of ’emotion’ to be gained from going the old-school way, but in our opinion a DCT would be smoother and quicker at changing gears, potentially attracting a wider customer base. 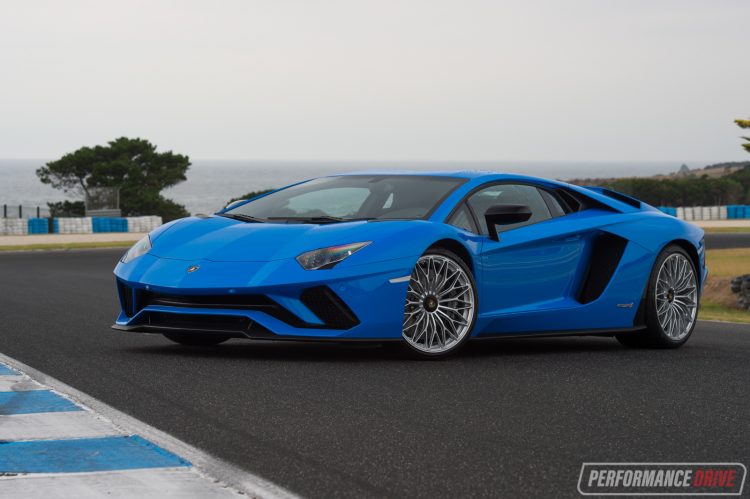 Overall, the new model should help the company see through continued success when it arrives later this year. It has been posting sales records consecutively for the past few years, and Australia is currently within the top 10 most popular market regions for the brand.  The new Urus SUV is expected to become the best-selling model, and not just in Australia but in plenty of other markets around the world. Prices for the S start from $788,914 (excluding on-roads).

If you’re in the market for a monster V12 supercar with genuine Italian pedigree, the Aventador S is still that. Only now it’s more advanced and more sophisticated, and it will suit a slightly wider range of buyers thanks to some increases in practicality. Check out our track lap below for more of an idea of its sound and performance. We’re hoping to put together a more in-depth road test and video in the near future.

Some photos by Joel Strickland