Surely this is one of the rarest mainstream cars around today? It’s an original 1987 Holden Commodore SL VL turbo, five-speed manual, wagon. And it’s brown. It couldn’t be any more of a potential sleeper if it tried. It’s currently for sale up on eBay, located in northern NSW. 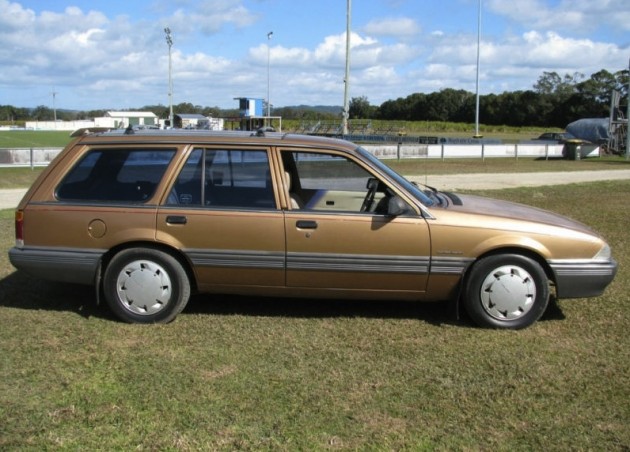 It’s not the flashiest or most expensive cool find we’ve featured but there is definitely a big element of rareness to it. And the fact that it’s a completely stock wagon (wagon versions of anything are almost always better, just because) makes it even more worthy of this section.

The owner says the VL turbo wagon hasn’t been used much in the last five years, spending most of its time in a garage. The owner also says that it was bought from the original new-car buyer back in 1989, so it’s only had two owners since new.

The car does have a few blemishes and small scratches and dents here and there, but nothing out of the ordinary for a 1987 vehicle. The engine is a completely standard – almost impossible to find with these cars – 3.0-litre turbocharged six-cylinder, matched up to a factory five-speed manual transmission.

The owner says it drives normal with no issues and has done 231,680km. To top if off it also comes with factory chrome roof racks (ultimate sleep style), a rear tailgate wind diffuser/spoiler and a tow bar. It also has NSW registration until June 2012.

At the time of writing this, the VL had 10 bids and was up to $2650. The reserve price has not been met though. We can’t help but wonder what this extremely rare VL turbo example will end up going for.

If you have a large turbo hanging around the garage and need something to bolt it to for some serious sleeper action, or simply want a cool stock wagon for the daily commute, you can make a bid and see all the details of this VL turbo wagon eBay ad here. The auction closes in two days.