It’s coming. The all-new 2021 Porsche 911 GT3. This is one of the last of the 911 variants to switch to the latest 992 generation, following the Carrera and Carrera S and more recently the Turbo S and the Targa. 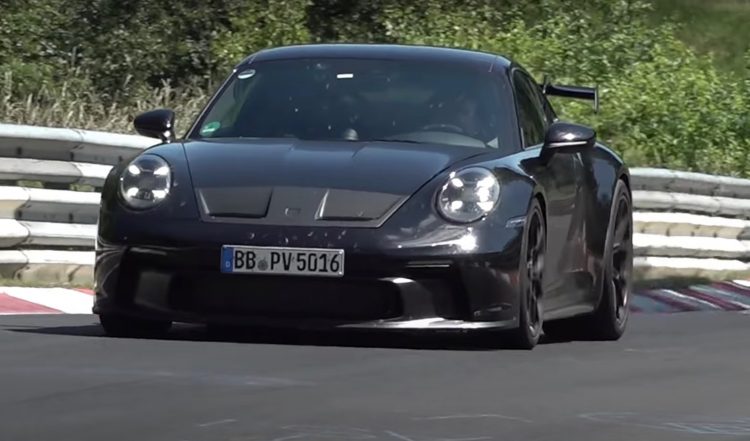 A prototype 911 GT3 992 was spotted hooning around the Nurburgring recently. And boy does it look fast, and sound so good doing so. However, the cornering speed is equally, if not more impressive than the speed and sound.

Around some of the corners on the notoriously unforgiving German circuit, the driver appears to be going hell for leather, really pushing the test mule to the limit of adhesion. It looks like the driver is purposely trying to provoke wheel slip on some occasions too, and not necessarily following the ‘racing line’.

According to reports the next-gen track-ready model will come with a heavily revised 4.0-litre naturally aspirated flat-six engine. Word has it the power could be turned up to around the 405kW mark (550PS), which would be up quite a bit from the standard outgoing GT3 which develops 368kW from a 4.0L unit.

Details regarding the transmission haven’t been officially confirmed, but it sounds like the PDK dual-clutch auto will continue. A manual transmission could be offered as an option, like the outgoing model. Yet more tweaks are likely for the PDK though to ensure it evolves for the better like the legendary nameplate.

Aside from adopting the 992 design traits, such as a full-width taillight, lower and wider nose, and updated circular headlights, the 992 GT3 is expected to showcase some pretty big changes in aero. This prototype shows a big month at the front with deep side intakes, side winglets on the front corners, and of course a big wing at the back.

Porsche is yet to announce a debut date for the new model. We suspect the coronavirus pandemic might cause some delays, but we’re betting it’ll be on the market well within 12 months. Check out the spy video below for a preview. And be sure to turn it up.