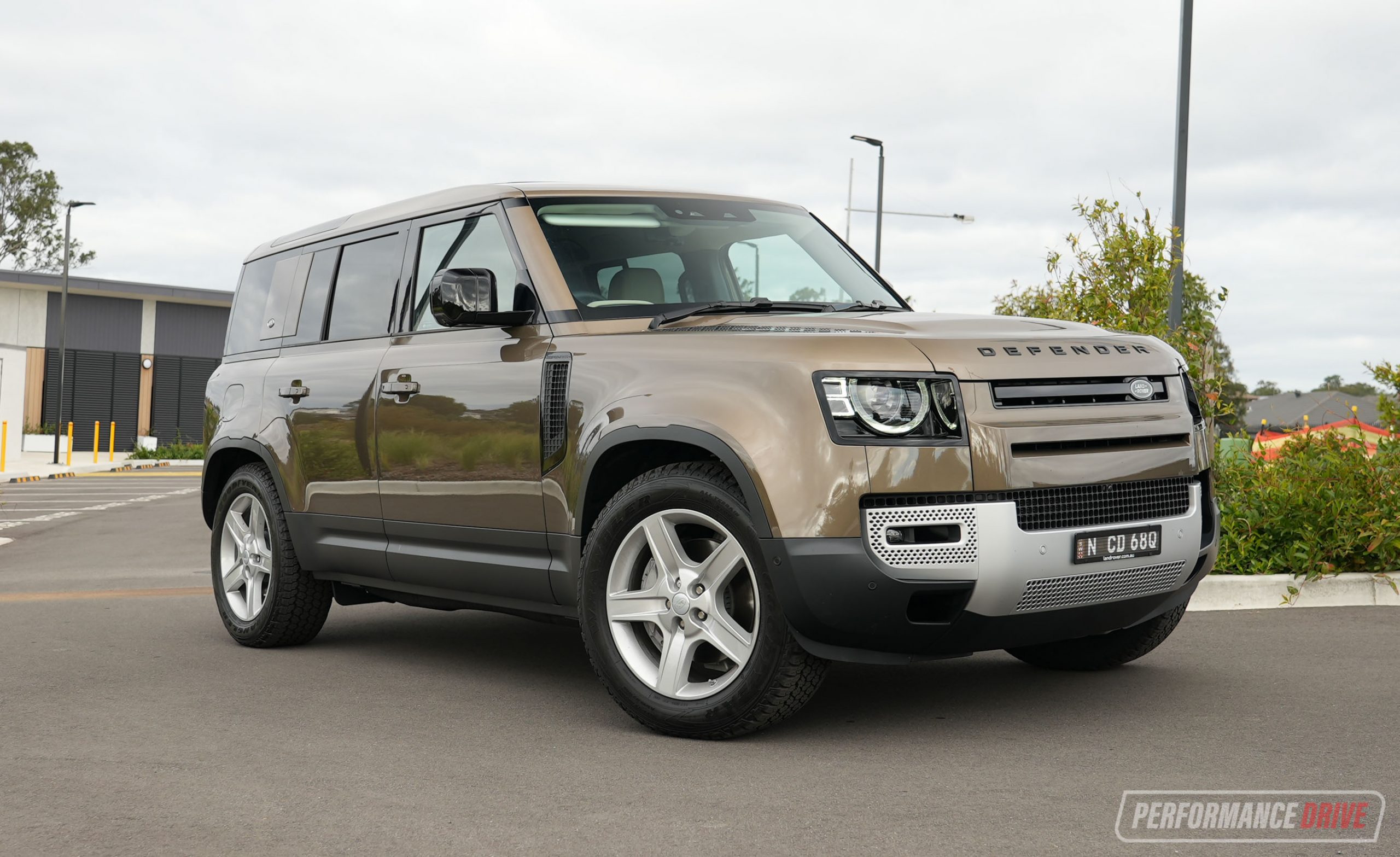 Land Rover is on a roll at the moment, offering a number of really attractive, high-quality and very capable products in its showroom. And the 2021 Defender D300 SE seems like another great example. 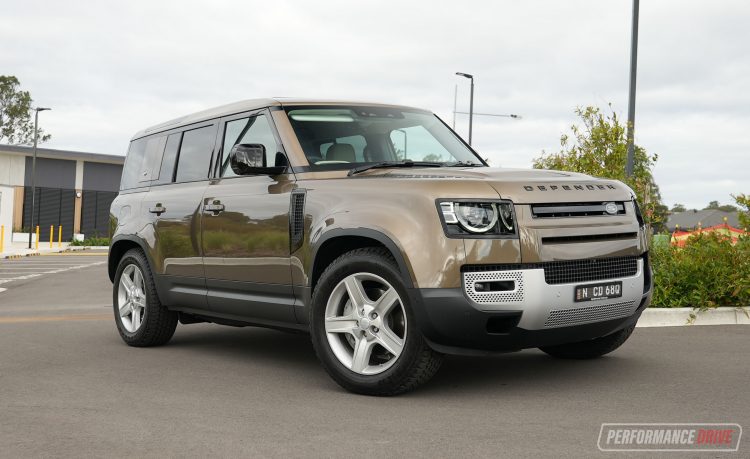 Yes, the new Defender isn’t as rugged or as utilitarian as its predecessors, and yes it could/should be called the Discovery. But on its own, as a separate product, there’s no denying the aesthetic appeal of this thing, and its capability. As it should be, it still is the most off-road-capable vehicle Land Rover currently offers.

There are around 11 different main variant lines and trim levels to choose from, in five-door ‘110’ wheelbase form. Then there’s about 11 more of the short wheelbase Defender 90. It can be both exhausting and exciting browsing through to find your ideal package. To be honest, this test vehicle comes very close to our perfect real-world setup, considering price and everyday needs.

The D300 is the flagship diesel engine comprising of a 3.0-litre twin-turbo (one electric turbo) inline-six backed by mild-hybrid technology, developing a stout 220kW and 650Nm. While ordinarily a mid-range trim on other JLR products, the SE is the entry level trim for the D300. You can opt up to the HSE and the X trim as well, or step down to the D250 S and even plain D250 – the entry D250 diesel uses a similar 3.0-litre turbo-diesel inline-six, only it produces 183kW and 570Nm. 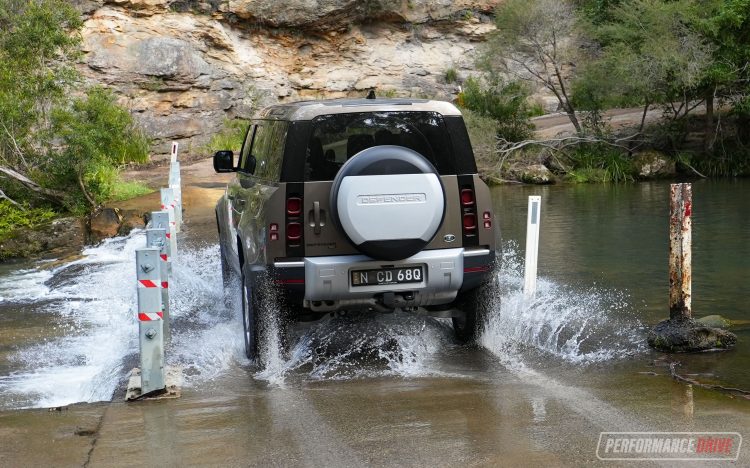 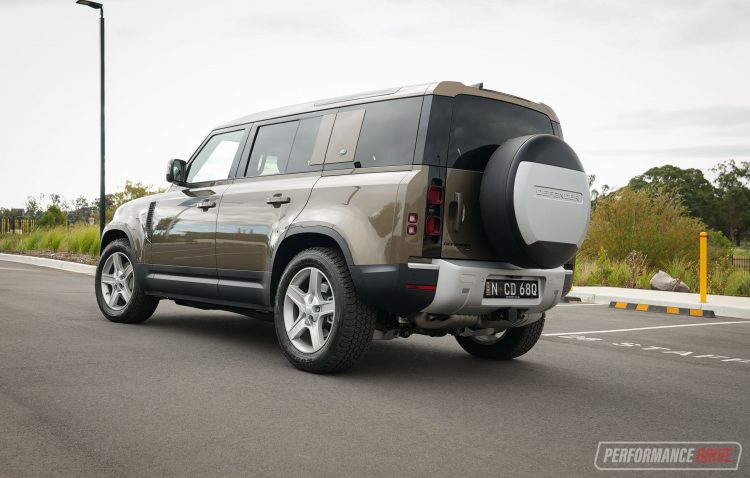 There aren’t many SUVs on the market that are quite this practical. It’s like Land Rover engineers have been told to put as many shelves and storage options inside as physically possible. You’ve got a full-width shelf running across the dash, including behind the main touch-screen. And it’s lined with rubber as well so anything you put there will stay there. A floating centre console contains grippy, multi-size cup holders, a deep tray, and a large centre box under a fold-up arm rest. Yet further storage can be found under the console/gear selector, complete with a trio of charging ports.

Sitting up the front reminds us of Land Rover’s Range Rover models. You get that raised, majestic, commanding seating position, allowing you to look down on all of your servants… other motorists. The large steering wheel can be positioned perfectly to your stature via the standard power-adjustment function, and the seat itself – also power-adjustable as standard – can be moved around to provide excellent ergonomics and comfort. 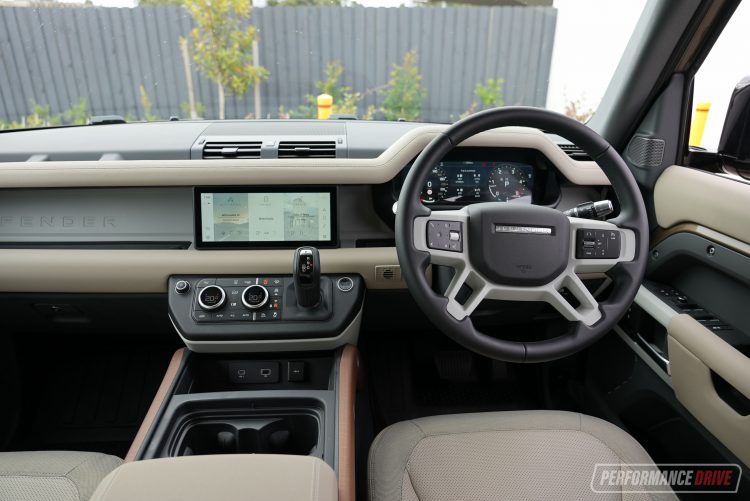 This is a really pleasant place to be. Tall windows open up not only the view but also allow light to shine in. Speaking of which, Land Rover offers an interesting fabric peel-back sunroof option, as featured on this test vehicle. We’re not really sure what the advantage is over a conventional glass item (also available), except that the complete section can be opened. This is obviously not possible with a large glass panel as it would have nowhere to retract into. The fabric unit is a $4810 option, and glass is a $4490 option.

In the back, having that giant roof peeled back, it can feel like you’re driving one of those safari vehicles in South Africa. It’s nice. During our test though we found little use for the fabric roof as driving around the suburbs of a capital city doesn’t quite have the same effect. But it’s good to see rear passengers are not relegated. In fact, the accommodation and amenities are mind-boggling. Heaps of storage, a plethora of charging facilities, cup and bottle holders, and yet more adjustability from the seats means this is a perfect vehicle for travelling families. 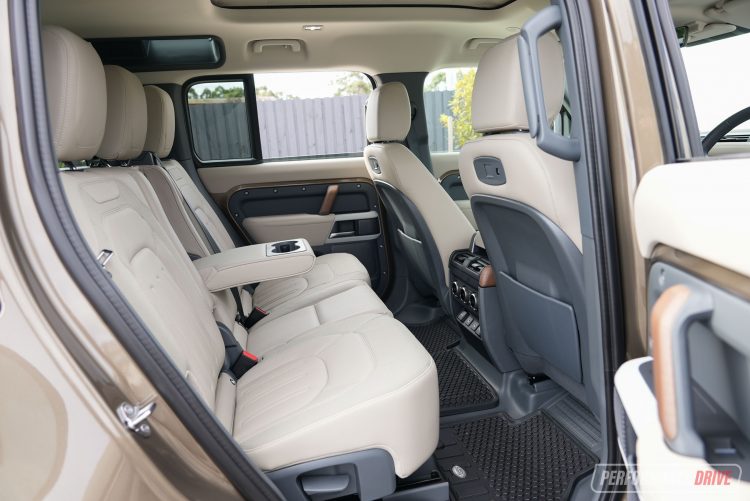 The middle row slides back and forth, and reclines, and this test vehicle shows off the Family Pack option ($4796) which includes a third row of seats. It also adds in three-zone climate control – yep, three different zones, perhaps reflecting the sheer size of the cabin volume – and air quality sensing and air ionisation, and an auxiliary chiller.

Legroom in the third row isn’t all that great compared with some of the other large three-row SUVs out there, but headroom is very impressive. Fortunately, you can slide that middle row forward a bit, if fitted, so that can help. You’ve also got those trademark corner roof ‘alpine light’ skylights providing a light and airy atmosphere. 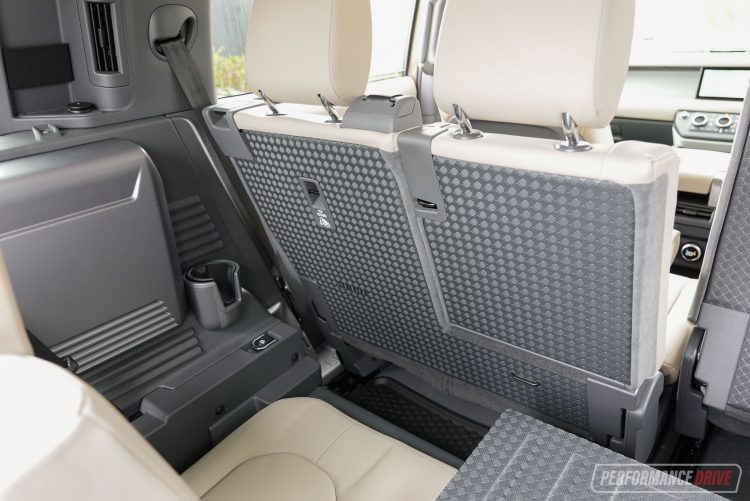 Boot space is stamped at 1075 litres in the default five-seat configuration, and opens up to 2380L with the second row folded down. Thanks to a tough and durable plastic lining on the backs of the seats you really can chuck all sorts of gear into the back, and there’s a neat shelf tucked away on the inside of the side-hinged tailgate. The tailgate is heavy and there can be challenges opening it during tight parking situations.

It’s amazing that Land Rover has snuck in cup holders, climate fan speed controls, and yet more charging ports for the third row. For kids, they’ve basically got their own little sanctuary to keep them happy (and quiet) during long interstate journeys. 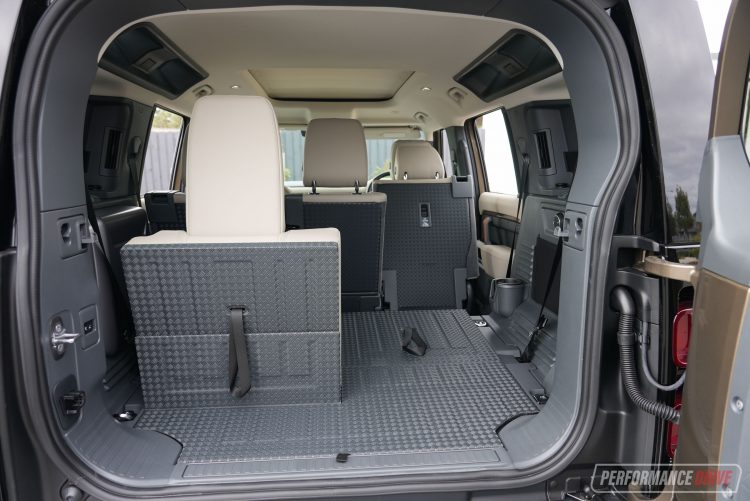 As for the on-board entertainment and in-car functions, the new Defender comes with JLR’s latest PiviPro infotainment system, incorporating a 10-inch touch-screen that provides Android Auto and Apple CarPlay, with digital radio, sat-nav, and a splendid 400W 11-speaker sound system by Meridian (an award-winning British audio system producer, established in 1977). You can option up to an 11.4-inch touch-screen as well, while the fully digital instrument cluster is standard and offers various display themes, including map view and trip info views.

One option that is definitely worth considering, especially if you’re an outdoorsy type, is the activity watch. Well, it’s actually called a “leisure activity key”. It looks a bit like one of those activity wrist watches that seem to be the craze at the moment, and that’s essentially what it is. However, it can lock and unlock the car. Basically, you can leave the main key in the car and solely use the watch. So you can head off for a run down a mountain bike track or go for a bush walk and not have to carry around the dead weight of a key. It might seem like something the marketing department came up with but it’s actually very handy. It is an extra $910. 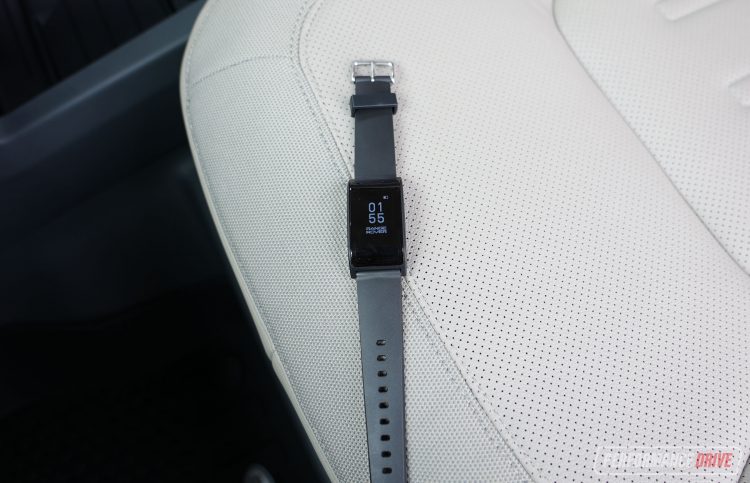 Let’s start with the engine. Falling under JLR’s latest Ingenium family, it features 48-volt mild hybrid technology with a starter-generator. A 3.0-litre capacity and six cylinders in line, the unit is pressurised by an exhaust-driven turbo and an electric supercharger, helping it develop 220kW and 650Nm. It’s not the most powerful diesel six in the industry but it is certainly up there. Peak power is available at the meaty point of the rev range, at 4000rpm, and peak torque is spread between just 1500rpm and 2500rpm.

Fuel economy is rated at 7.9L/100km, which is not bad at all for a 2.3-tonne vehicle. In the real world we averaged 9.4L/100km, which involved some highway driving, performance testing, and light off-road stuff. You could probably expect around 8.0-8.5 after extended use in regular conditions. 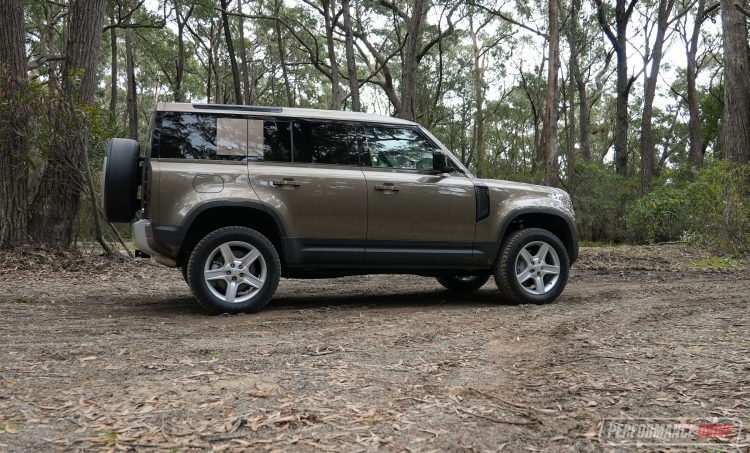 Despite the reasonably acceptable consumption (for its weight) the D300 also performs brilliantly during overtaking and outright acceleration. Using our usual Vbox Sport and a private road we clocked a best 0-100km/h in 7.16 seconds. That’s just shy of Land Rover’s (usually optimistic) time of 7.0 seconds.

What we love most about this engine is the sheer smoothness and its effortless nature. It enjoys to have a bit of a rev and play when you poke the throttle, but it can also operate in the background while pulling like a train. You get this sense there’s a huge reserve of torque just waiting to be utilised. Cruising up long, steep hills, the Defender just charges along without a fuss. And being an inline-six, it produces quite a nice sound, for a diesel. Throughout much of the rev range it actually sounds like a petrol, with only hints of diesel clatter at specific points or if the engine is still cold. 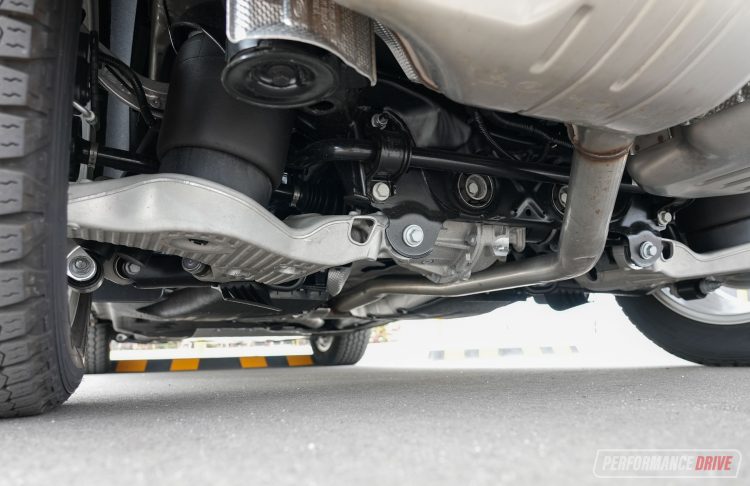 The ride comfort from the air suspension package is just sublime. In the city it irons out dodgy road connections and changing surfaces with no annoying thuds or rattles, and the 255/60 tyres offer plenty of sidewall absorption. Perhaps the downside to this is the evident body roll. It does tip around more than some of the other crossover-style SUVs on the market, especially compared with most of the stuff from the German manufacturers. It feels quite confident and appeasing on fast tempo country roads, and actually doesn’t feel as out of place on tight mountain roads as you might think. But higher speed sweeping bends are more of a handful. 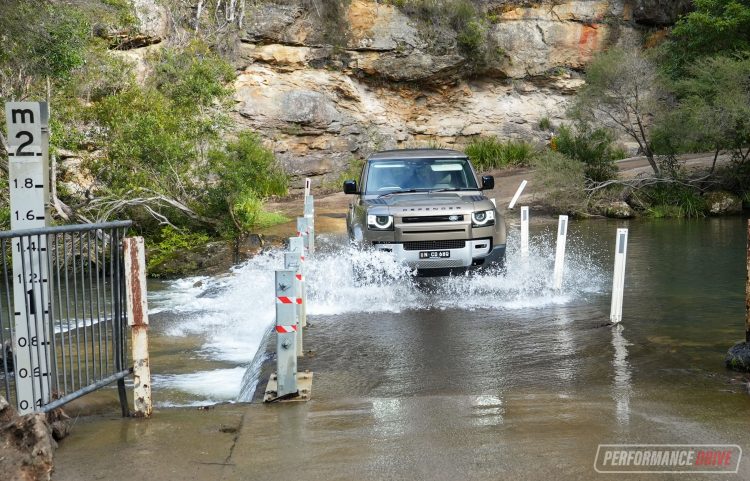 Of course, the benefit of this is off-road performance. And no German SUV gets close to what this thing can do – except maybe one of those G-Class wagons from Mercedes. The very short front and rear overhangs provide outstanding approach and departure angles, of 37.5 and 40 degrees.

That’s when the standard air suspension system is lifted to its highest mode. In this mode you also get enormous clearance from ground. 291mm, in fact. That’s about as high as it gets for a mainstream production SUV, let alone a seven-seat SUV. There is no doubt the new Defender is well-prepared for off-road excursions.

Admittedly, we didn’t take this example too deep into the bush. But in our test of the P400 last year, the Defender proved to be an unbelievably nimble and capable beast in slippery and technical conditions. Low-range and centre and rear differential locks, and those alluring measurements, will more than satisfy most family’s needs, no matter how adventurous their aspirations. 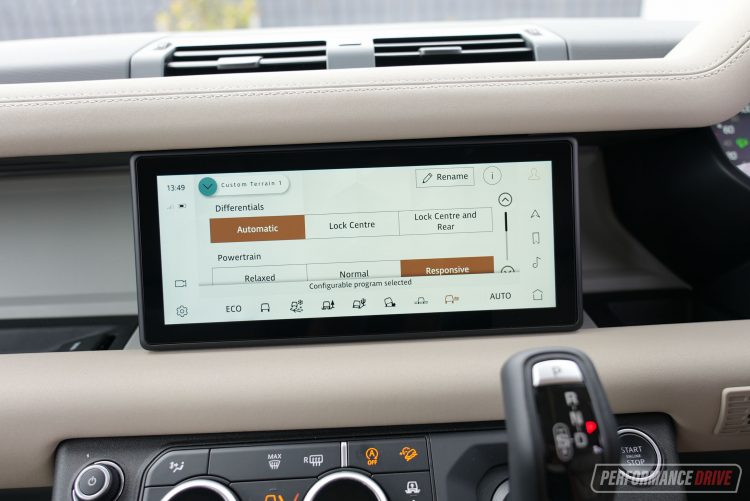 We really love the new Defender. It offers a mixture of modern design, outstanding in-car practicality and thoughtful features, and unrivalled off-road capability. We think this D300 is the best fit for these characteristics, too. It’s a super-refined inline-six that offers strong performance and respectable economy. Really, the only area that needs work is the sheer availability of trim levels and options, and the subsequent digits they add to the bill.