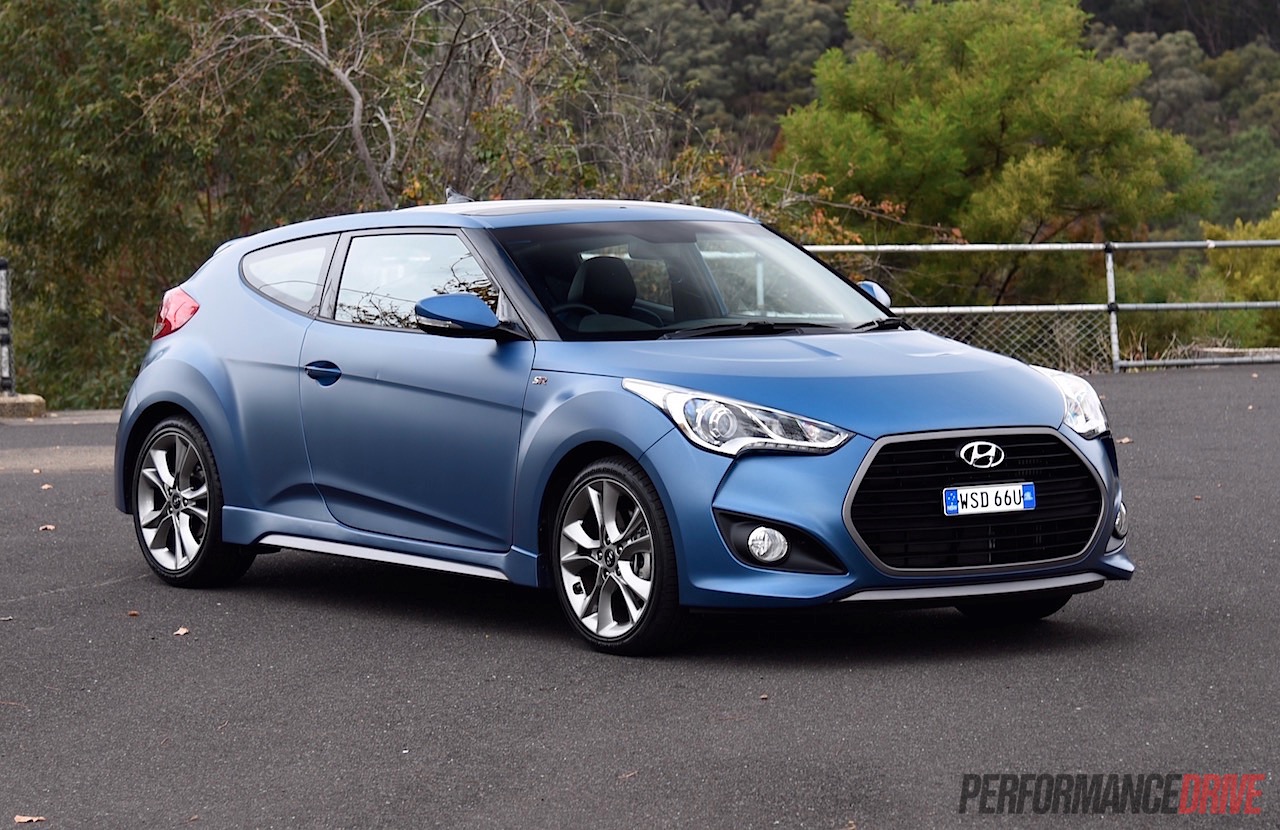 Hyundai has released the series II version of the 2015 Veloster SR Turbo, and introduced a new flagship called the SR Turbo Plus. It features a host of new luxuries, and most importantly, a new dual-clutch transmission option. This is the first time the Korean manufacturer has offered a DCT for the turbo variant. But, can the new ‘Plus’ justify the $6500 premium over the base SR Turbo? 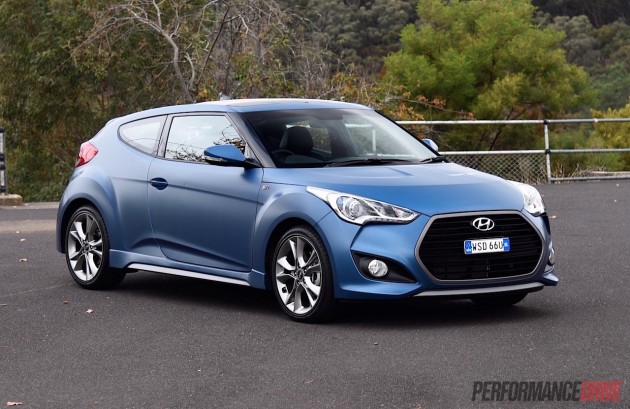 The series II Veloster range kicks off with a naturally aspirated 1.6-litre GDi, which produces 103kW and 167Nm. Prices start at $24,490. The Veloster Plus sitting above comes packaged with the same engine and manual transmission, but comes with luxuries like a sunroof, leather-appointed seats, and keyless entry and start. This demands a $5000 premium over the base model.

The $29,990 SR Turbo manual, which costs just $500 more than the non-turbo Veloster Plus manual, is powered a 1.6-litre unit with a blower attached. This ramps power up by 46 per cent, to 150kW and 265Nm. It also turns the otherwise less-than-thrilling Veloster into a bit of a rascal. What we’re testing here is the top SR Plus with the new seven-speed dual-clutch auto. Prices start at $36,490. It gets the same feast of luxuries as the non-turbo Veloster Plus, as well as subtle changes to the styling, dynamic steering adjustments and heated/ventilated front seats.

Hyundai claims sales between its naturally aspirated and SR Turbo models are split perfectly at 50 per cent, so we thought we’d try this review from two perspectives; how the Veloster handles as an everyday workhorse, and how it copes when you make the horses work hard. 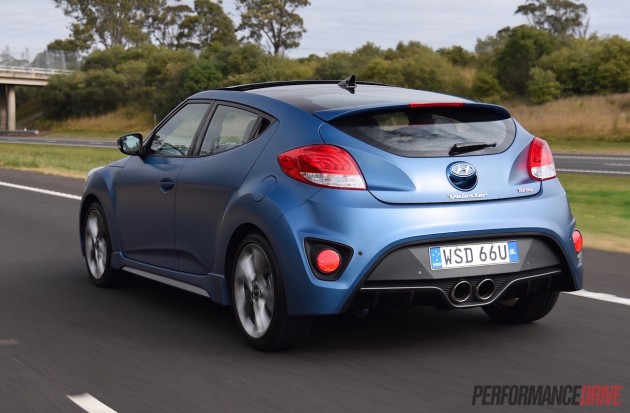 The Veloster SR Turbo + as a daily driver

Inside the SR Turbo Plus, you immediately notice the flamboyant touches that remind you of the extra $6500 that you paid. With scatterings of bright blue and ‘turbo’ stitched onto the seats, the Veloster possess lots of character from the minute you step in.

The cabin is spacious, and thanks to the panoramic sunroof it is an incredibly airy place to sit. You won’t hear too many complaints from passengers in the rear either due to the unique architecture and single side door. There’s also a creative rear window which allows more light to enter the rear of the cabin. Headroom in the back is limited though. If you’re over six-foot you’d be better off calling ‘shotgun’ so you can ride up front.

While sitting up front you’ll be able to fiddle around with the Hyundai’s 7.0-inch infotainment system and connect your phone via Bluetooth, USB or auxiliary. The eight-speaker audio system is a quality unit too, with a saturation of bass and mid-tones to satisfy even the youngest demographic and their desire to destroy their cochleas.

Our test car has the matt blue finish, called Blue Sprinter. Normally we’re not a fan of matt colours but the blue does give the Veloster much more presence we think. It also accentuates the lines along the side profile and shows the pumped guards more clearly, adding to its aesthetic appeal.

The $2500 dual-clutch transmission option can be both a blessing and a burden when zipping around the city on a daily commute. In both automatic and manual modes it dilly-dallies when accelerating from a standstill, and also allows the car to roll backward when on an incline. Even minor flaws like this can prove frustrating on the daily commute, but overall the transmission offers smooth shifts (when it behaves itself).

Despite packing a pretty impressive punch, the Veloster can and will perform as unexcitingly as you’d like when cruising around the city or down the highway. Official ADR tests state economy figures of 7.1L/100km combined and 9.4 in the city. During our time we were able to get an average of 8.2L/100km with a mix of urban run-arounds, performance driving and lengthy highway cruises. 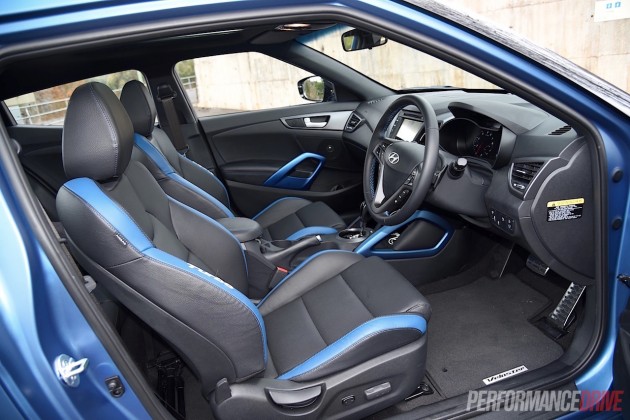 The Veloster SR Turbo + as a performance driver

On some high-paced and less strenuous corners, the Veloster can carry an impressive amount of pace while remaining composed. Inevitably, being front-wheel-drive, it does start to push wide on the exit of corners when you really push it, but there remains a substantial amount of grip from the front axle on the initial turn in.

Sadly, there are no adaptive dampers or sports driving modes. Hyundai does offer a three-way adjustable steering setting with Normal, Comfort and Sport. Normal and Comfort feel identical to us, while the Sport setting does add weight but not necessarily any type of improvement to steering feel, which makes the function a bit unnecessary in our opinion.

Hyundai’s tinkering with the dampers and suspension has created a much tighter package than its predecessor, but it fails to live up to the pure expectations set by its closest rival; the Toyota 86. However, when it comes to overall driving feel and pleasure, this is a great all-rounder and it is probably more useable and more enjoyable to a wider range of buyers.

As for the new DCT, much like when putting around the city, at pace the transmission can be frustrating, with some shifts delayed by fractions of a second, and some other shifts completely denied by the Veloster’s brains. In manual mode the transmission has a mind of its own, with automatic upshifts (sometimes at very bizarre points in the rev range), and it doesn’t always follow your command on downshits. There’s no doubt it is significantly quicker than the previous conventional-type auto though and it is more fuel efficient (7.1L/100km vs 7.6L/100km). 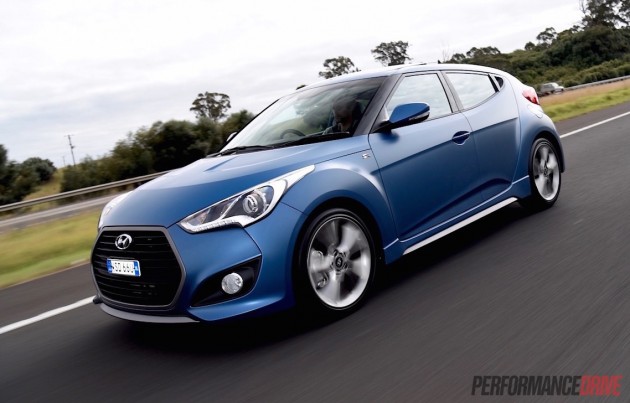 One of the most notable aspects of the Veloster is that it is a major signifier that Hyundai is a much more desirable brand than it used to be, especially with the very fickle 20-35 year-old demographic. If you cast your memory back to a time when cars like the Excel were the only Hyundai you’d see young people in, purely because of affordability, it’s clear to see that Hyundai has done a remarkable job in terms of brand development and becoming, for lack of a better word, ‘cool’. Want some proof? Well, in the first four months of this year the Veloster out-sold all of its competitors, even the Toyota 86. Hyundai sold 1158 examples of the Veloster through April, versus 1087 Toyota 86s.

So, for a mid-$30K offering, it does deserve a lot of the praise it has garnered over the years. The way we see it, there are two types of potential buyers for the Veloster; the buyer that values the funky styling and the practicality of it all, and the one that values the 150kW under the bonnet and the overall performance. If you’re the latter category, you may be better off saving money and opting for the manual transmission.

The DCT auto demands a premium that puts it dangerously close to some serious players in the hot hatch game. Only a few thousand more and you could drive away in something like the Ford Focus ST and VW Golf GTI. If it were our money we’d take the more competitively priced SR Turbo, non-Plus variant, with a good-old fashioned gearstick. It starts at just $29,990.