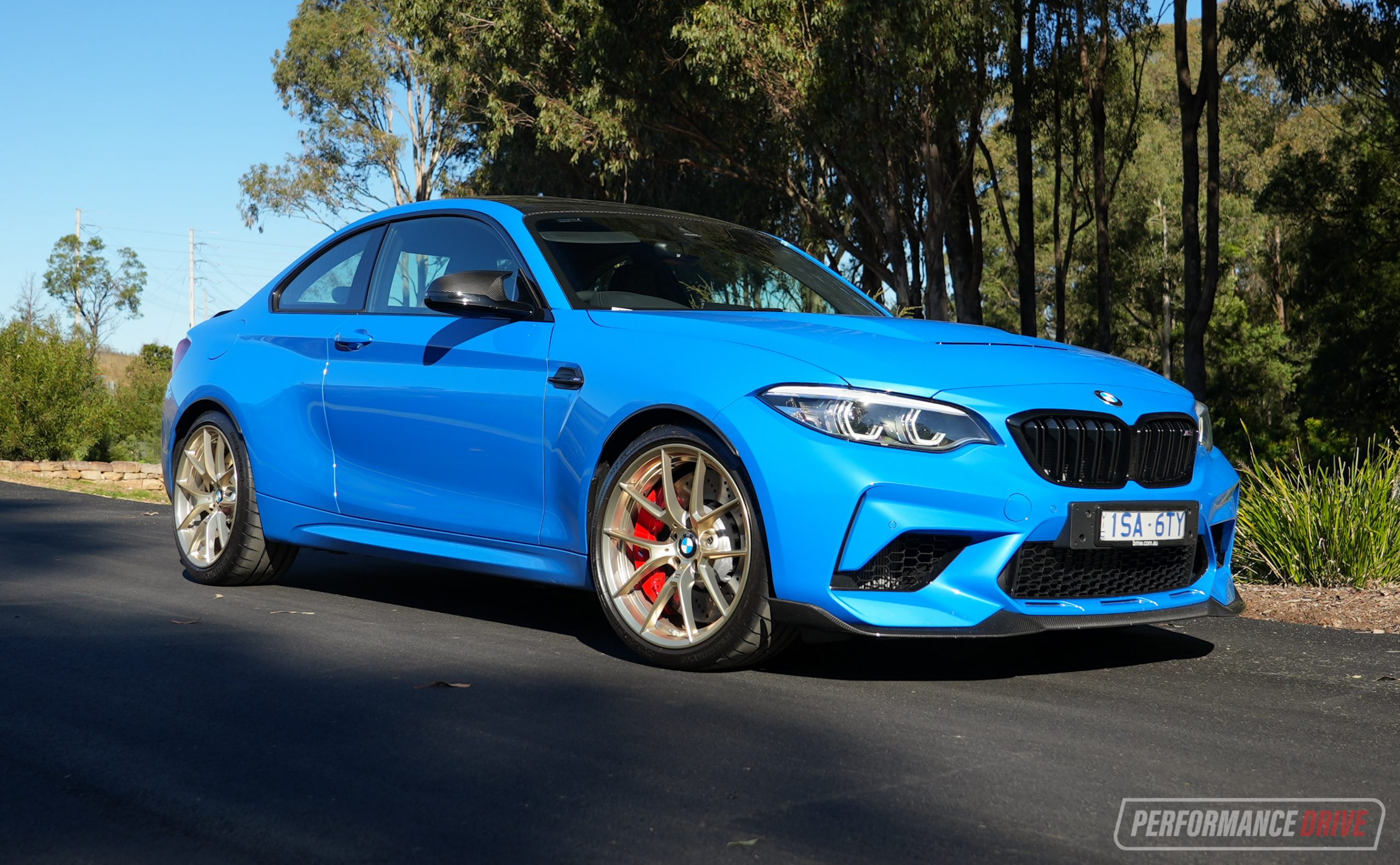 There aren’t many rear-drive four-seat cars on the market at the moment that can provide the same thrilling, tyre-smoking driving enjoyment as the 2021 BMW M2 CS. But you could say that about the regular M2. Is the CS worth the extra dosh? 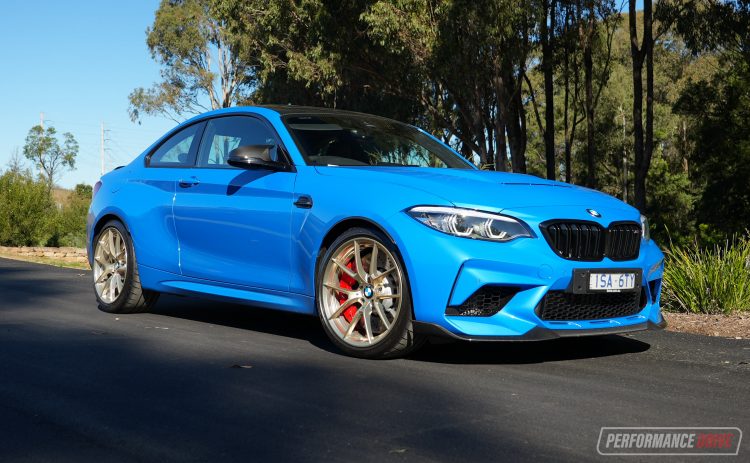 This is the most hardcore iteration of the M2 yet, featuring the previous M3/M4 Competition engine, with weight reduction and heavier-duty components to ensure absolute driving nirvana above all else. Wait, what? M4 Competition engine? Yep, that means 331kW and 550Nm is inside this little coupe. 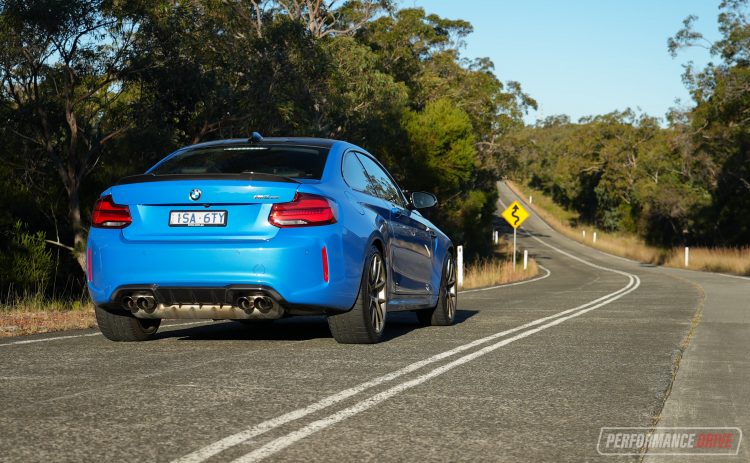 The M2 is at the very end of its life cycle in its current form. And that becomes immediately apparent when you step inside. Up on the dash is a smallish (by modern standards and for this price range) 8.8-inch touch-screen display running BMW’s now superseded 6.0 operating system. Apple CarPlay is included but Android Auto is not.

Although it is a stripped-out sports car designed primarily for regular track use, it’s not as bare as you might think. And in fact not as bare as past CS models, such as the M4 CS. Sure, climate control is analogue and singular, and the centre console is completely removed and replaced by a custom carbon fibre fixture, but there are plenty of amenities to support daily driving. 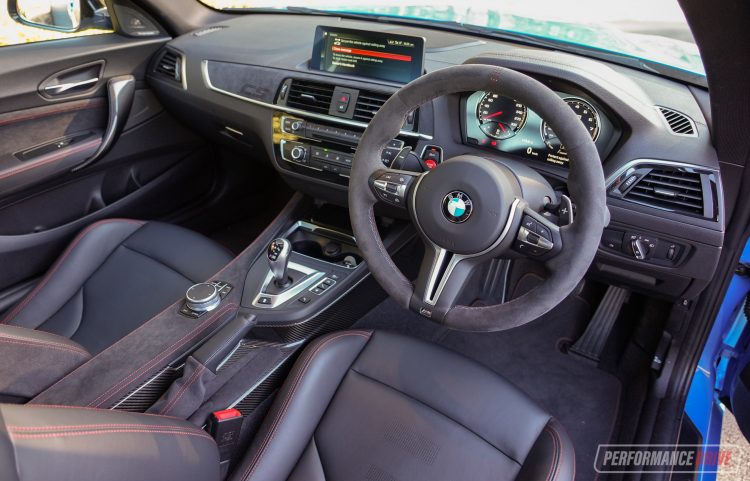 A pair of cup holders remain at the front of the console, for example, and BMW’s typically huge door pockets provide handy storage for odd bits and pieces that we all inevitably accumulate. There’s even sat-nav, digital radio, and a 12-speaker sound system. To be honest, we would have liked to see some of those speakers removed. Speakers can be quite heavy, and here the 12 of them don’t really give off an inspiring audio experience anyway. We’d be happy with six.

These seats are straight from the old M4 CS. They hug you in all the right places and, thanks to the slots cut into the wings, they breathe and allow airflow to your back. Which is important if you’re planning (and you should be planning) lots of track days in this car. Alcantara is used liberally, including for that bespoke console, parts of the dash and door cards, and for the perfect three-spoke steering wheel. BMW steering wheels seem to be getting fatter and fatter with every generation, but this one doesn’t fall victim to that. 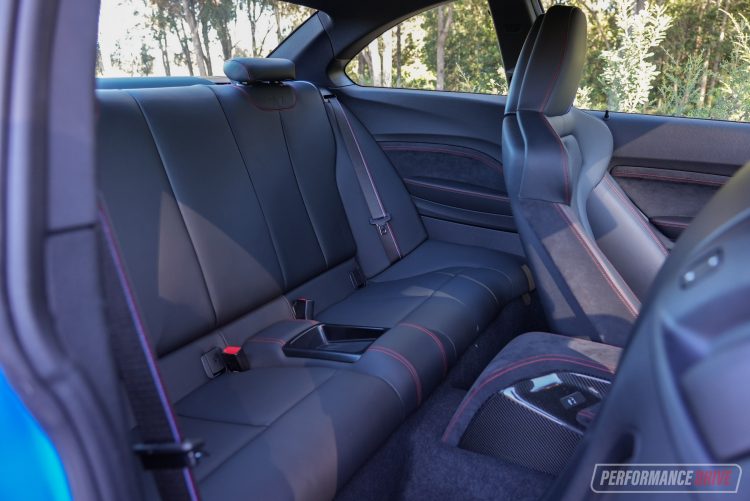 You can cart around passengers in the back if you want/need to. It’s only a two-seat bench with a little storage tray in the middle. But headroom and legroom are reasonable considering this is a small coupe, after all. Putting it another way, the back seats are useable, unlike those in some other sports cars, such as the Ford Mustang, the Porsche 911, and even the Nissan GT-R.

Similarly, the M2 has a decent boot. It measures 390 litres, which is the same as the regular M2. A netted pocket on the side can hold small things from bouncing around, and there’s a 12-volt socket in here. It’s good. And again, it reiterates the fact the M2 CS could be used as a daily driver. 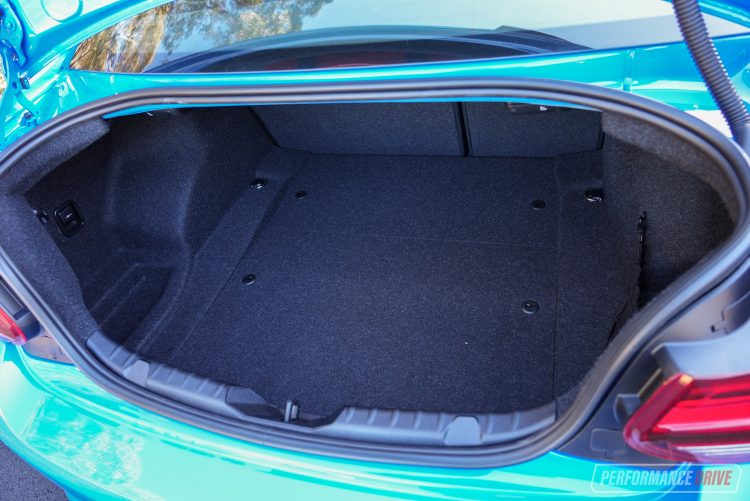 According to Redbook specs this has exactly the same tare weight as the M2 Competition auto, at 1543kg. You might find that hard to believe given the CS has a carbon fibre roof and bonnet, special lightweight forged wheels that weigh just 9kg (front) and 10kg (rear), and that carbon fibre centre console and lightweight sports seats from the M4 CS.

Underneath, all control arms that make up the five-link rear axle and wheel carriers are made from forged aluminium, with lightweight aluminium front and rear axles, and a lightweight steel rear sub-frame. We’ve tried to find a figure in BMW’s big press kit but it doesn’t mention an exact weight reduction figure over the regular M2 Competition. Why? Surely, if you’re going to go to the trouble of fitting all of these carbon fibre parts, as extremely appealing as they are, then why not boast about their actual weight saving? 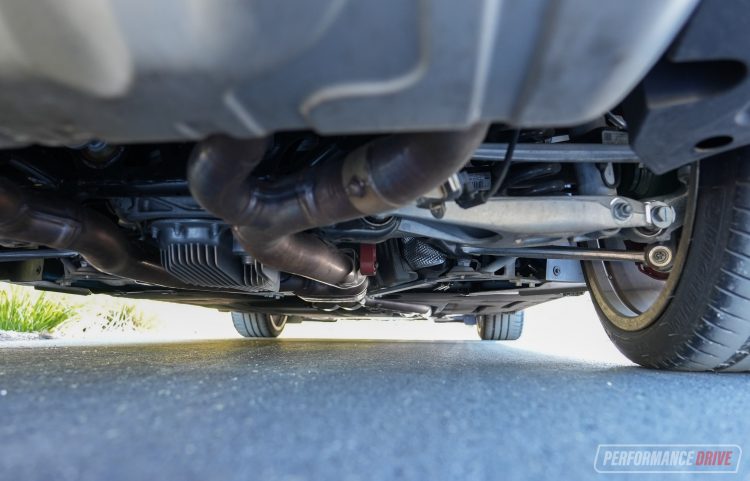 Well, that’s because the CS does indeed weigh about the same as the M2 Competition. However, the weight saving measures offset some of the additional content that comes in. For example, the adaptive M dampers weigh more than the standard items; the bigger brakes weigh more (except if you option for the carbon ceramic ones); and added cooling measures are also brought in which add quite a bit.

There’s a separate oil cooler for the DCT auto, an extra engine oil cooler, two additional radiators (three in total), and the sump features an additional cover to limit oil movement during high-g cornering. A second oil scavenge pump is also installed, and the oil return system is revised so it can handle extreme acceleration and braking forces. This is all stuff that comes directly from BMW’s motorsport division. Actual racing cars. 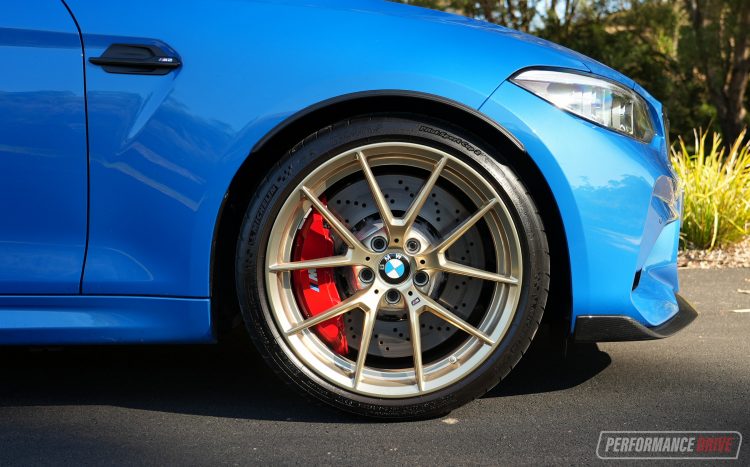 So yes, the M2 CS is technically no lighter than the M2 Competition, despite all of the cool carbon fibre bits. But in reality, the centre of gravity is lower and the car’s ability to survive during extreme demands is significantly heightened. If you go for the carbon ceramic brake option, as steeply priced as it is ($15,000), we reckon you could thrash this thing all day on a track with absolutely no hiccups. It’d probably drive you home and back again to do it all the next day, too. Mind you, you might be in need of some rear tyres by that stage.

Yes, of course the M2 CS loves to drift. It’s in BMW’s DNA or something. These machines were designed for it. And they respond so well to it. It’s like taking a Labrador to the beach and asking it to retrieve a stick from the water. It’s in the breed. 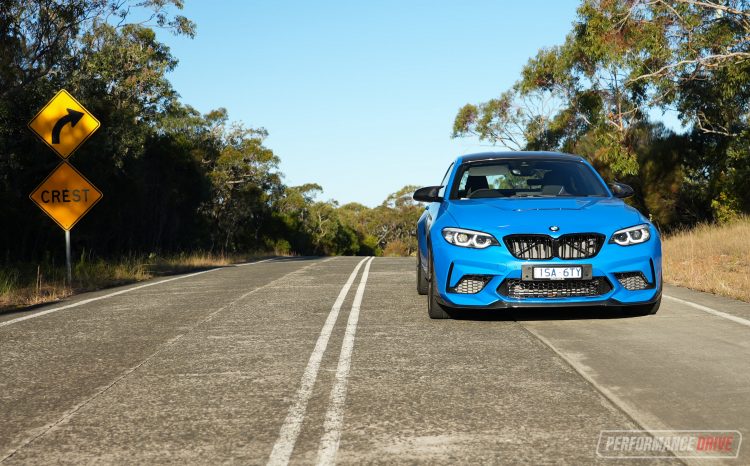 Grip driving is also highly enjoyable, partly as it feels so light and nimble on its feet. You can direct it where you want it and it’ll follow the desired line with pinpoint accuracy. But, conversely, there’s nothing more rewarding than executing a cheeky sideways scamper on a mountain road. The M2 CS not only supports you during these times, it tends to encourage you to do it again. But it’s not like some cars out there that seem like they want to kill you. This is very friendly and reassuringly predictable. If you flick it in early and apply a bit more throttle than you need, it’ll kick out but hold its angle. Unless you prompt otherwise. It really is driving perfection.

Obviously the ride is firm. After all, it’s built for the track. The rear sub-frame is rigid-mounted to the chassis, for example, with no flexible rubber bushes. This is to ensure absolute response and precise feedback for the driver at all times. Ball joints are also used to transfer lateral forces on the axles, again, with no play or any pinch of sloppiness. This ensure that what you put in is exactly what you get. Amazingly though, it’s not touchy or overly sensitive through any of the inputs. The steering is spot on, and the engine response and the way the chassis reacts to harsh or sudden throttle and braking is just perfect.

We’re really struggling to find something to complain about here. As a driver’s machine this is just plain astonishing. This is definitely a go-for-a-drive-for-the-sake-of-it car. You’ll want to take the long way to work, and from work. And you’ll elect to be the designated driver every weekend. It’s that enjoyable.

We guess the price is very steep, especially the auto. But then again the level of extra engineering and the additional hardware included (not just the engine) probably do sum up to around $37,000 over the regular M2 Competition. Hmm… We’re stumped. Just buy one, if you can. You don’t need any convincing on our part. You won’t be disappointed.

PROS:
– A driving enthusiast’s wet dream
– Seriously, look no further for absolute driving fun; it just does what you want, when you want
– Looks sick with carbon parts
– Proper motorsport hardware inside, not just an engine conversion