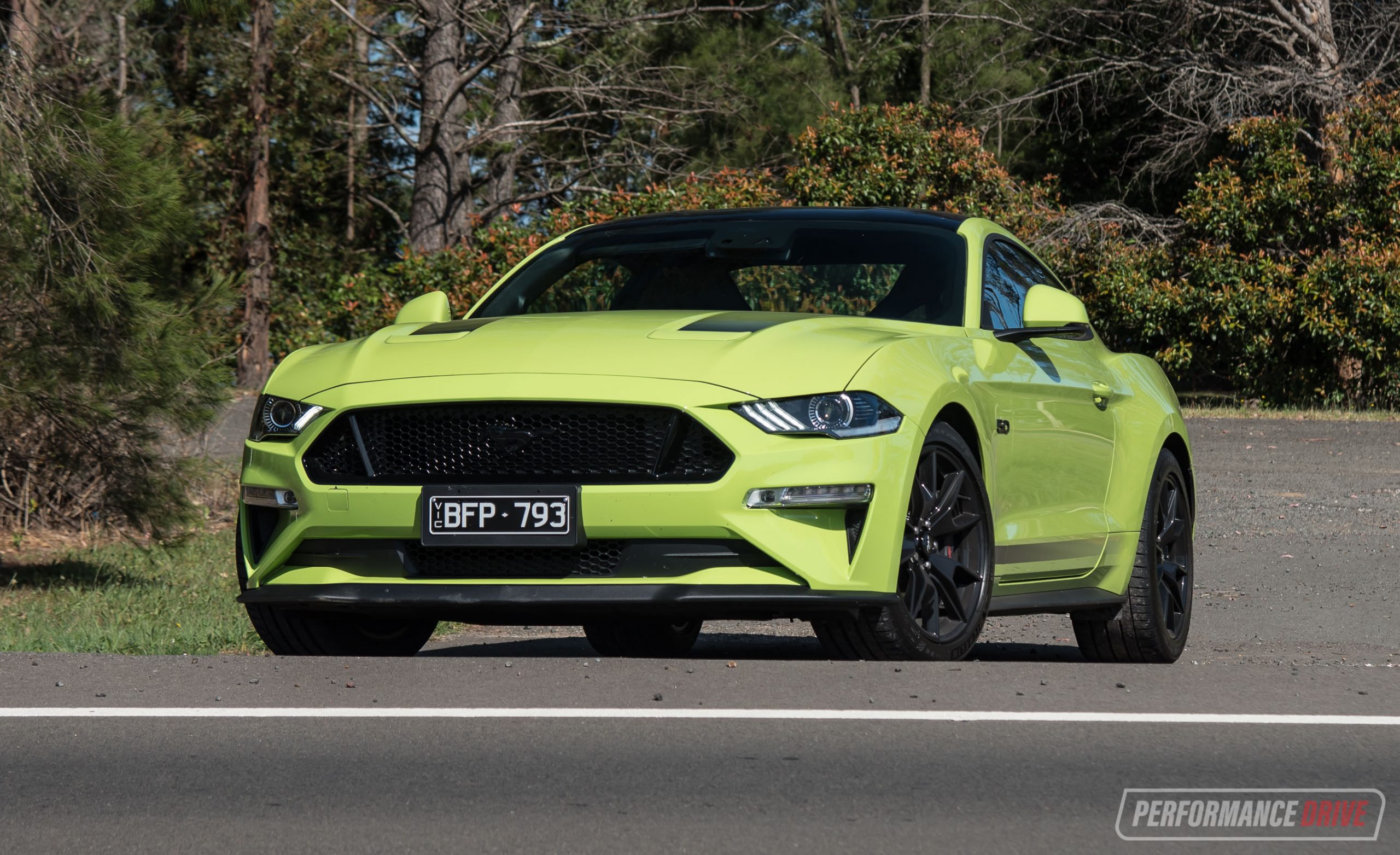 It hardly needs an introduction, but in case you’ve missed it, this is the latest Ford Mustang. Otherwise known as the most popular sports car in the world. In fact, it’s been the best-selling sports car, globally, for the past four years in a row. Accolades don’t get much better than that. 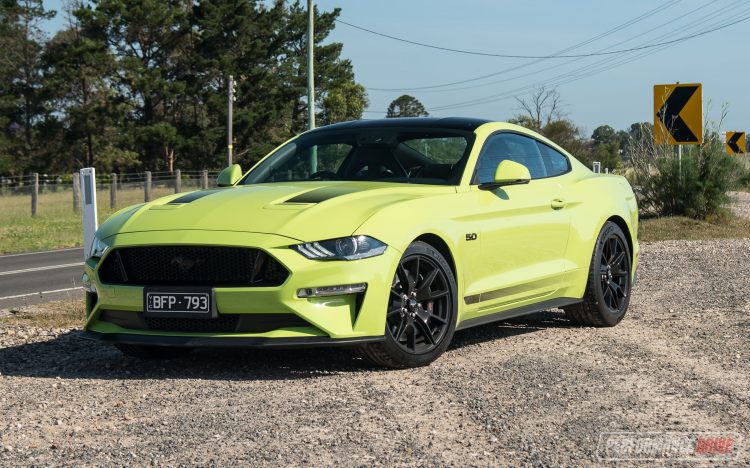 The GT sits at the top of the range, featuring the iconic “5.0” naturally aspirated V8. For the 2020 model power stands at 339kW and torque peaks at 556Nm. These outputs were introduced as part of the 2019 facelift, lifted from 306kW/530Nm in the initial new-shape Mustang GT. Also brought in with that facelift was an optional 10-speed auto, which is available with the entry 2.3 turbo variant as well.

Some more revisions have been made for the MY2020, mainly to do with colour and exterior trimmings, and the introduction of a four-year/60,000km capped-price servicing ($299 per scheduled service) program. No major changes are made to the interior or hardware. 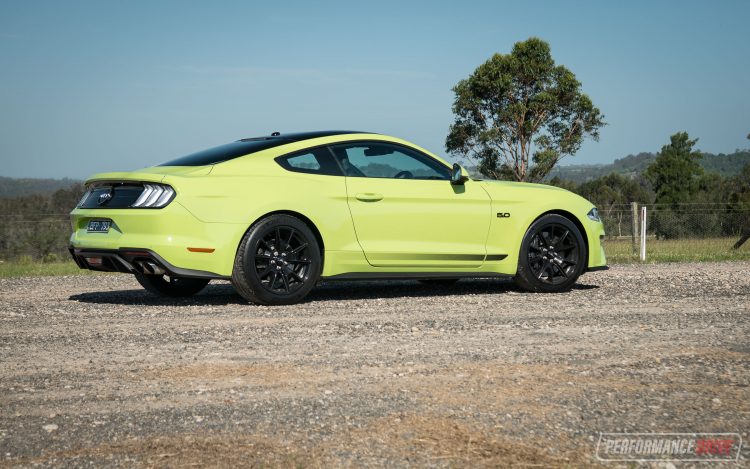 It’s impossible to miss the Mustang on the road. Not only is it very popular, so they’re everywhere, but they showcase a unique design characterised by a long bonnet, pushed-back cabin, and fastback-style rear, unlike any other model on the road. This profile has been carried through for generations of Mustang, which also helps it stand out as something very iconic and instantly-recognisable.

This example we’re testing here shows off the Grabber Lime paint option ($650), and the Black Shadow Pack option ($1000). Both of these available upgrades were brought in with the 2020 model year. The black pack adds a black front grille, roof, badges, and some black decals for the bonnet and sides. It also includes these black 19-inch alloy wheels. Needless to say, the overall package certainly stands out in a crowd.

Sitting inside, it’s immediately apparent this is a sports car. You sit very low and the enclosed coupe environment adds some theatre. The Mustang’s dash isn’t exactly cutting-edge in terms of contemporary design or materials. It’s pretty basic, actually. And the chrome buttons and details seem to make a connection to its classic American heritage. But it all works and seems very fitting. 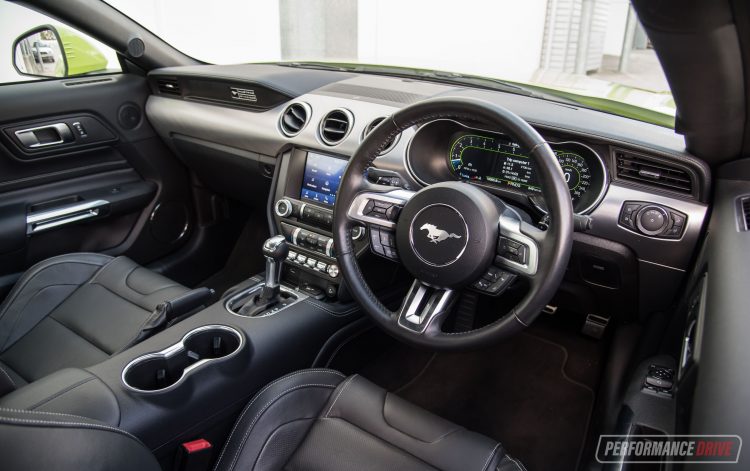 Atop the dash is an 8.0-inch touch-screen interface running Ford’s SYNC 3 operating system. The menu functionality is okay in our opinion, and the screen’s response to touch is quite good. Our main criticism is that it perhaps lacks some depth in terms of modern graphics, menu animations and swipe/pinch capabilities. However, it is connected up to a blasting 1000W B&O PLAY sound system with 10 speakers, which definitely suits the loudness of the car.

Passenger space in the front is excellent, with plenty of legroom and enough headroom even for tall drivers. It’s a bit annoying that the handbrake isn’t positioned on the driver’s side for the RHD market, but this is more of a problem with the manual transmission. With the auto, drinks in the cup holders are less of an obstacle for the driver since you’re only moving the shifter when stopping and starting. The centre console box is tricky to open if you have the seat positioned beyond about the halfway point, and the storage available is minimal. But overall, the accommodation and comfort, including from these Recaro seats, is supportive of long spirited drives on the weekend. 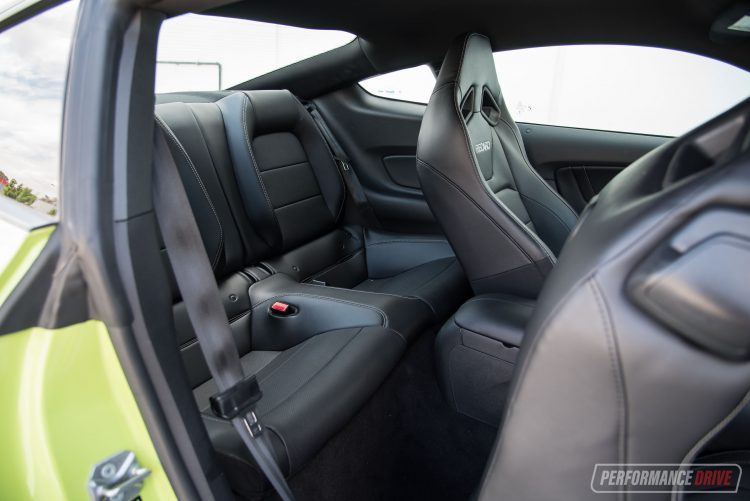 Rear seat space is tight, mainly for headroom. We took this example for a decent run from Sydney to the Southern Highlanders, with three men. Two of them were over six-foot tall, and me, about 170cm. We took turns sitting in the back and found it is surprisingly… not as bad as you might think. As long as you lean in towards the centre, and the front seat isn’t all the way back, there is some comfort to be found back here. It’s just strange that the Mustang is just under 4.8 metres long yet there isn’t much room in this area.

Where you can find much more space is in the boot. At 408L, it offers a similar capacity to some of the larger practical hatchbacks that are on sale at the moment. There is definitely enough room to cart weekend luggage, and some. Even with the standard sub-woofer neatly merged into the boot wall. 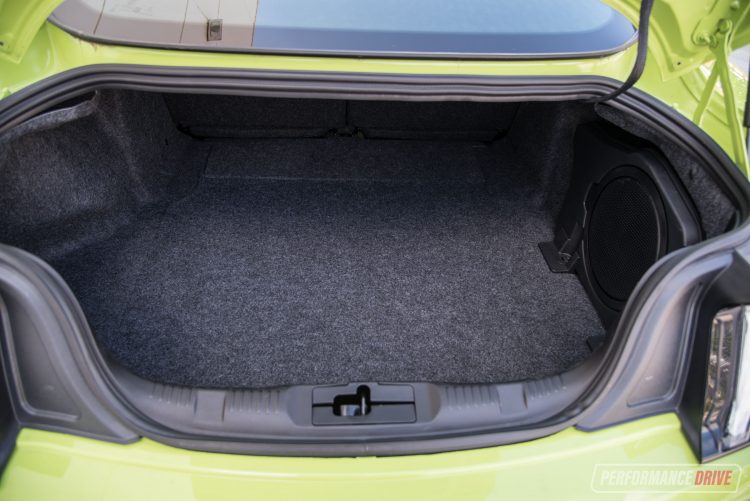 With a V8 sports car, we think it’s important it sounds good. Well, the Mustang GT has that part covered. This Coyote engine belts out an almighty tune. And it revs hard. Surprisingly, for an American muscle car, peak power is hit at 7000rpm, but it will keep going until 7500rpm. At which point it starts to sound like a highly-tuned street machine.

The power delivery is very linear, as expected for a naturally aspirated engine. There isn’t a heap of torque down low though, with maximum torque not available until 4600rpm. Don’t think for a second that it lacks low-end grunt. It’s just that it doesn’t present all it has to give until later. That’s probably a good thing as any more would likely be wasted to wheelspin.

Matched to the 10-speed auto, which is an interesting feat in itself, the GT builds speed just like the engine revs; it’s linear. There’s not really a big whack of power that thumps you hard in the back. Instead, it feels like it generates similar longitudinal g-force through all gears. It’s almost like every gear is a first gear, because there are so many of them. 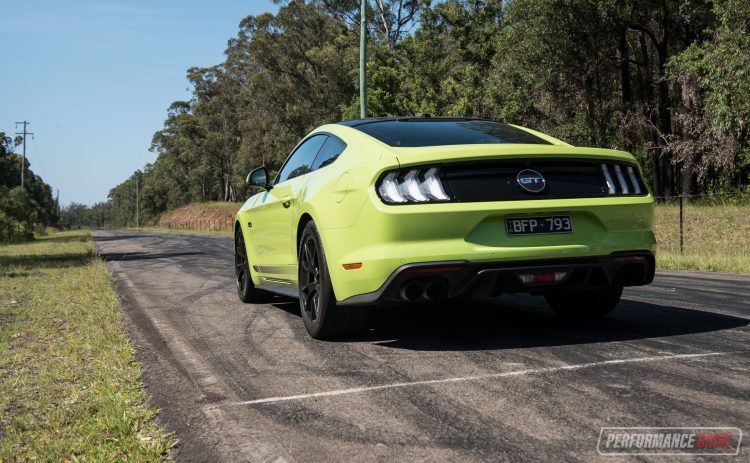 Across the 0-100km/h sprint we clocked a best of 4.98 seconds, with 0-200km/h coming up in 15.74 seconds, and the old-fashion 1/4 mile done and dusted in an impressive 13.05 seconds. These are some very decent numbers in the drag strip world, perhaps fitting for the iconic nameplate. And we must admit the conditions were warm during our runs (about 26 degrees). In cooler temperatures we think it could do around 4.7 seconds to 100, or less.

You can pick from a number of driving modes, including a Drag Strip mode and Race Track mode. There’s also separate modes for the exhaust system, with Race Track being the loudest and a new Quiet mode for early morning starts. We found a big difference in the transmission calibration in the Drag mode, even compared with the Race mode. The gear shifts are noticeably more ferocious in the former, chirping the tyres going into second and third gear (see video below). We tried some runs in Race mode as well and found the gearbox to shift more smoothly, but without chirping the turns. There’s also a little parpy fart as it upshifts in this mode. 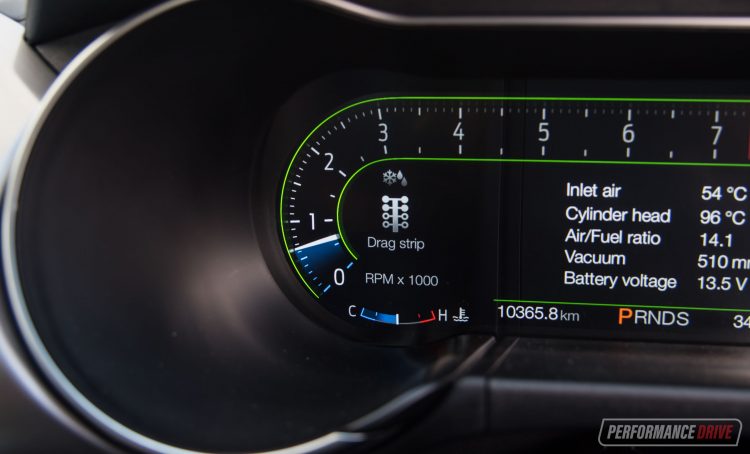 Traditional Mustangs were never really regarded for their cornering prowess. And we guess you could say a similar thing about the current model. The steering offers adjustable modes, with the comfort/lightest setting being our preference. However, there isn’t much communication coming back through the wheel, and even the steering ratio seems flat, lacking engagement, and, in general, uninterested in playing the game of corners. We found the limited-slip differential to be a bit unpredictable at times, too. But that could be subject to this test vehicle.

The handling from the chassis and tyres is great though, easily managing the power. But again, it can be challenging to know exactly what the tyres are doing when pushing really hard. That’s purely in comparison to the key market rivals anyway, including the Toyota 86 and BMW 2 Series. Instead, we think this car is best when you wind your driving tempo back to no more than 80 per cent and enjoy a more playful cruise. While, of course, basking in the glory of that V8 on the straight bits. 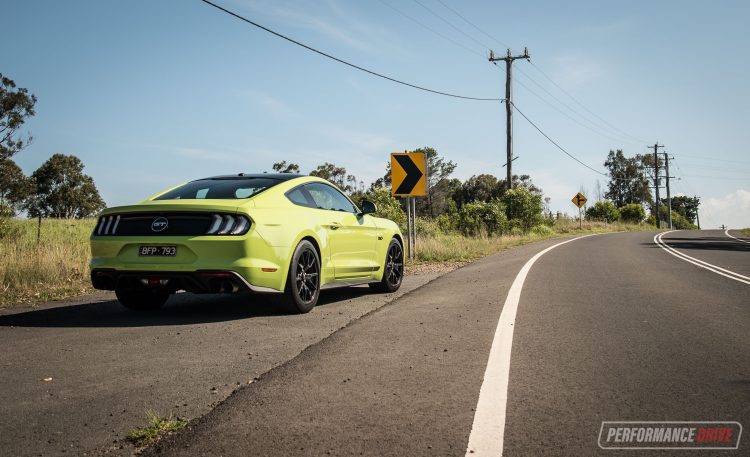 The Mustang is an icon for a reason; it has won the hearts of millions of fans around the world, over generations of models, and it continues to be a great success on the new car market. It’s definitely fun to drive and it makes you feel good doing so. The in-car practicality encourages you get out and about and take more weekend drives, too.

Areas that we think could do with improvement include the steering feel and communication, which isn’t quite at the level of other current sports cars, and the three-star ANCAP safety rating certainly isn’t a good look. Other than that, buy one and enjoy it for what it is. The price is very approachable, and Ford Australia now offers capped-price servicing to add peace of mind.