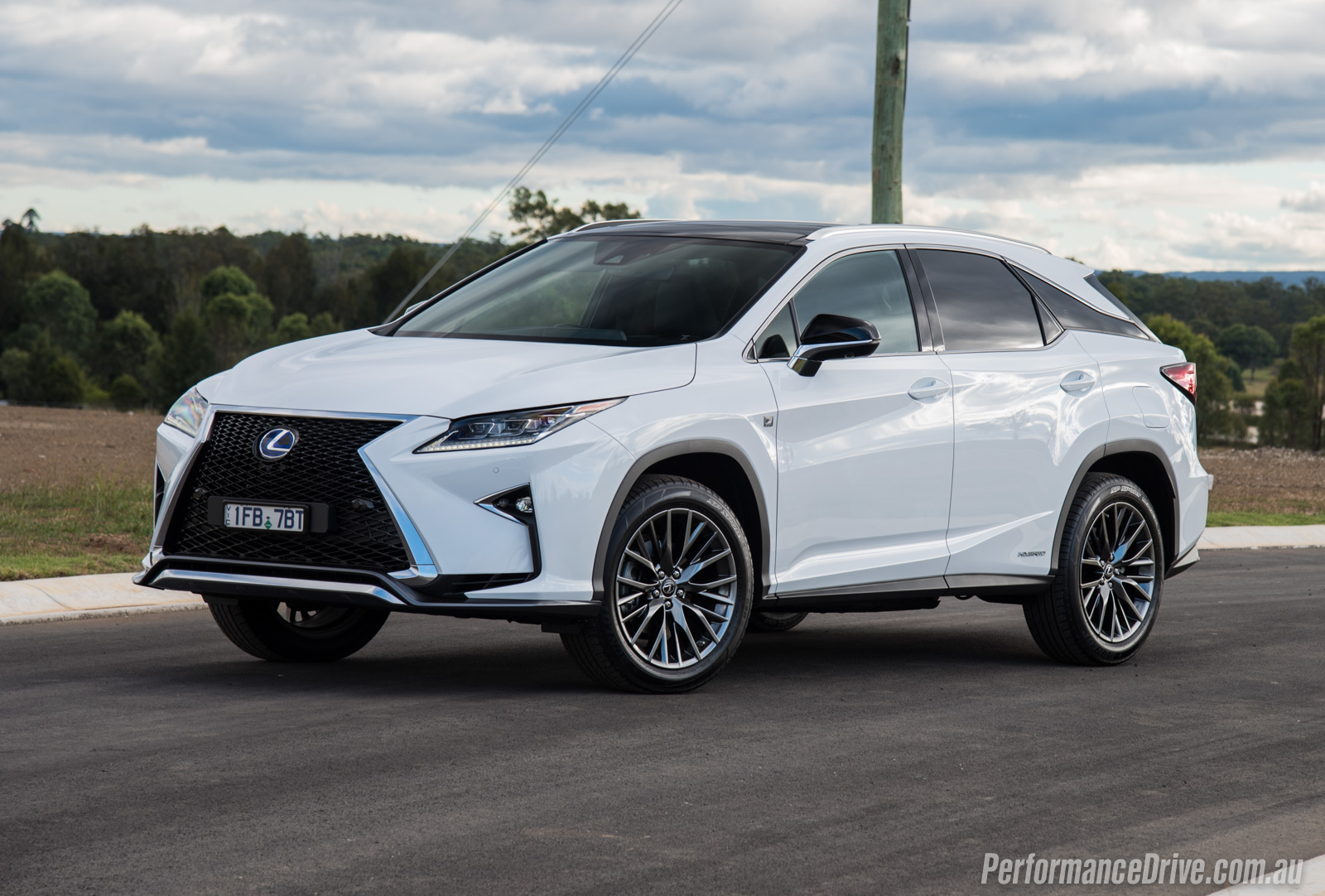 Lexus continues to resist torquey turbo-diesel engines with its SUVs, despite all of the German rivals offering such an option. Instead, the luxury Toyota brand is sticking to its hybrid formula for its most elite SUV. Welcome to the 2016 Lexus RX 450h F Sport. 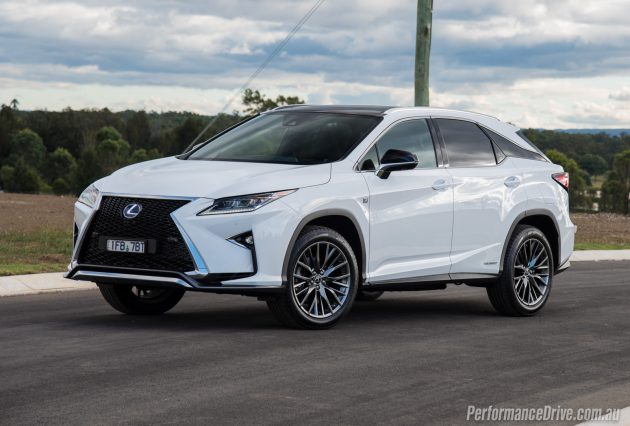 This is Lexus’s new RX; the company’s largest SUV (excluding the heavy-duty LandCruiser-based LX). It’s impossible to miss, isn’t it? With that vacuum-sucked face and pointy panels. Compared with the conservative and largely interchangeable German rivals, the new RX is arguably more modern and exclusive, from a design standpoint at least.

In 450h form it sits at the top of the range. Buyers are offered three main trim levels; Luxury, F Sport, and Sports Luxury. Here we’re testing the sporty F Sport, which, we must say, does look rather striking in white paired with the darkened highlights. Prices start at exactly $100,000 – good to see there’s no stuffing about with ‘990’ or ‘995’ for a change. The Luxury kicks off at $88,000. (Excluding on-roads.) 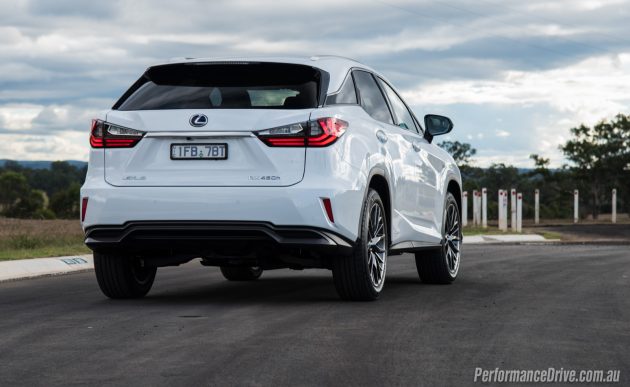 As pointed out in our 2016 RX 200t review, the interior of the new RX is a huge improvement over the predecessor. Lexus has gone for a much more classy and intelligent environment. The sharp angles on the outside are replicated inside, with shards of dash poking out and layering down, providing a cocooned seating composition, slightly skewed toward the driver. We like it. And just like the exterior, it’s a refreshing change from the common and often conservative rivals.

In F Sport form it gets a number of performance-inspired highlights, such as a unique bodykit with bespoke bumper bars, dark grey 20-inch alloy wheels, and a suitably sporty interior. We’re not a fan of the buckety F Sport seats as they don’t really suit the nature of the car; they feel too firm and aren’t ideal for cross country comfort. The seats in the regular Luxury and Sports Luxury are the way to go. 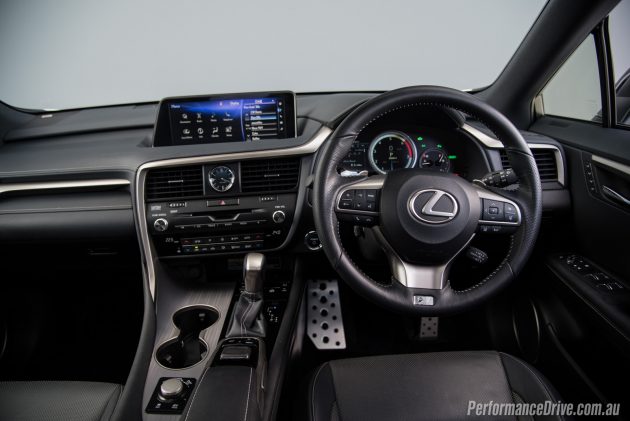 Cabin space is abundant. The centre console is high making you feel submerged in rather than sitting on the interior, and the dash is chunky but placed far enough forward as to not intrude on space. The rear seat is where you want to be though. This is a massive rear bench, with a long flat floor providing more than enough legroom. Headroom is good but the short side windows do amplify that cocooned-in feel that we mentioned above. Cargo space is rated at 453L, or 924L with the rear seats folded. This is the same capacity as the non-hybrid models and even the front-wheel drive RX 200t.

Does it feel like a $100k product? Putting aside the Australian car market, with its ridiculous luxury car taxes, we think it does feel and look very special indeed. And it’s not just a visual thing. The attention to detail is clear. We love the way the power windows silently rise and slow near the top for a smoother insertion into the door frame. We also like the soft-scroll knobs that feel like precision-crafted instruments. The leather feels supple and delicate too, with heating and cooling functions for the front seats, and an adjustable rear bench with separate venting. Most of the materials used for the decor have a whiff of luxury to them, albeit with some ‘plasticy’ Toyota parts. 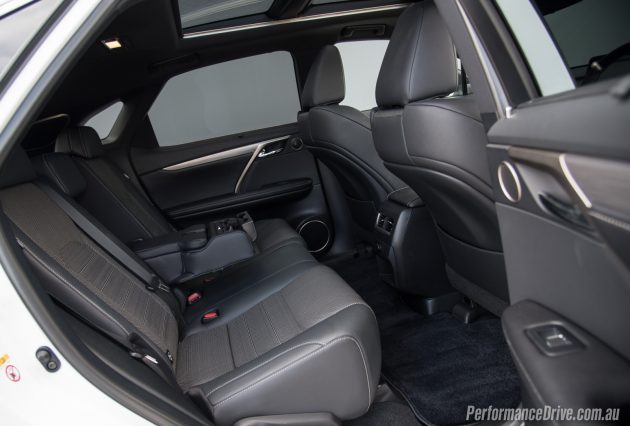 As standard with the F Sport you get a massive LCD dash interface controlled via Lexus’s Remote Touch joystick and mouse system, now with enter buttons on the sides, along with a brilliant 15-speaker sound system capable of producing clear, crisp tunes. You also get selectable driving modes with Sport Plus added (F Sport only), along with radar-guided cruise control with distance settings, low-speed autonomous emergency braking, wireless phone charging, head-up display, digital radio, and a huge glass roof with a front sunroof opening. All F Sport models also get Adaptive Variable Suspension – a first for the RX.

Economy isn’t the only benefit in going for the 450h hybrid. The luxury experience is heightened thanks to the silence of the powertrain. Technically, the 450h can run in pure electric mode, which is whisper quiet, but it’s only accessible at very low speeds, such as in car parks. Even still, the driving nature is very quiet and calm when you’re adopting a relaxed driving style. It’s not until you push it does the V6 engine come alive.

Lexus has made some pretty significant revisions to the 3.5-litre V6 for 2016, including upping the compression ratio from an already-high 12.5:1 to 13.0:1. Essentially this means each and every combustion involves a higher-pressure bang, helping with power efficiency and performance. Lexus has also implemented Toyota’s D-4S direct injection system for finer fuel delivery control and economy. These measures have helped bring an additional 10kW and 18Nm, resulting in 230kW overall.

Selecting the different driving modes doesn’t seem to bring much in terms of interactive gain, although the Sport Plus mode keeps the V6 revving higher than usual once moving, and the throttle response is sharper. Trying all modes, we timed a best 0-100km/h of 8.47 seconds (in normal). Despite the added power over the RX 200t (175kW), the 450h matches the 2.0T for performance (8.48 seconds). We put this down to the sheer weight of this machine. It tips the scales at a hefty 2170kg (tare), which is over 200kg heavier than the 200t.

The weight not only sacrifices acceleration; handling is also hindered. We noticed some strange understeer at very low speeds, leading into tight roundabouts, for example, with and without throttle. We suspect this is due to the amount of weight over the front axle; a V6 motor and a 123kW electric motor. At the rear axle there is a second, 50kW electric motor which is much smaller and lighter. It only directs power to the rear wheels when the conditions ask for it and under heavy throttle. Most of the time the 450h runs as a front-wheel drive. 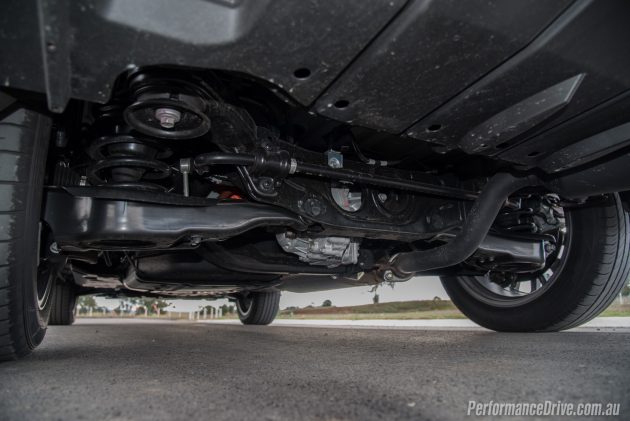 As with the interior, the F Sport package makes the ride firmer and more serious. In our opinion it is far too firm. It does come with adaptive suspension, as mentioned, but none of the modes are comfortable enough for this style of vehicle. Sure, the handling is rather tight and body roll is minimal, but it falls well short of the German rivals in terms of agility and cornering engagement. As a result, we think the regular, non-F-Sport variants should be the preference. We just don’t see the benefit of the F Sport package in terms of driving enjoyment. If it is more capable in the corners when really pushed, which we don’t think it is, we doubt any buyer is going to want to explore this or push it hard enough to notice or really appreciate the difference. Instead, the RX is better at being a luxurious and relaxing cruise.

All models feature twin-piston front brakes. They feel strong and powerful, despite the pretty ordinary stopping distance we recorded with the 450h (100-0km/h in 3.29 seconds at 43.43 metres). Engineers have tweaked the pedal feel for the 450h for a natural transition between caliper force and regenerative braking force. It works, too. The pedal feel is nice, especially for a hybrid. 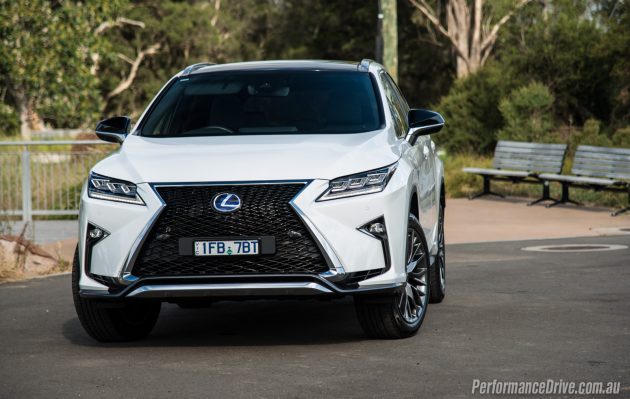 Aside from the driving experience associated with the F Sport package, the new RX is a friendly drive. The proportions aren’t intimidating and visibility is pretty good in most directions. The high window sills and high dash do take a moment to get used to, but it is easy to park and place on the road. Economy is also on the friendly side, but not particularly class-leading. Most of the turbo-diesel rivals offer slightly higher official average consumption figures, but in the real world we have experienced lower figures in these as you tend not to push torque-dominant diesel units as hard as you push the 450h. The CVT transmission, exclusively fitted to the 450h, is very smooth, but again, the V6 engine seems to climb the rev range too often just to fulfil a simple task, such as getting up to speed on the highway.

The 2016 Lexus RX is an unmistakably prestige, visually-impressive, and well-made luxury SUV. Its interior is comprehensively accommodating, with fine attention to detail, and it’s equipped with loads of creature comforts and clever technology-driven conveniences. It is a highly recommended, ‘buyable’ vehicle in this class in that respect.

Our only complaints are the 450h powertrain and CVT, and the F Sport pack that looks stunning but doesn’t seem to do much for driving appeal or comfort. We’d recommend you go for the RX 200t Luxury. You’ll save over $20,000 and get most, if not more of a luxury experience. If you need all-wheel drive (RX 200t is FWD only), then you have the RX 350 with its more favourable eight-speed sports automatic.