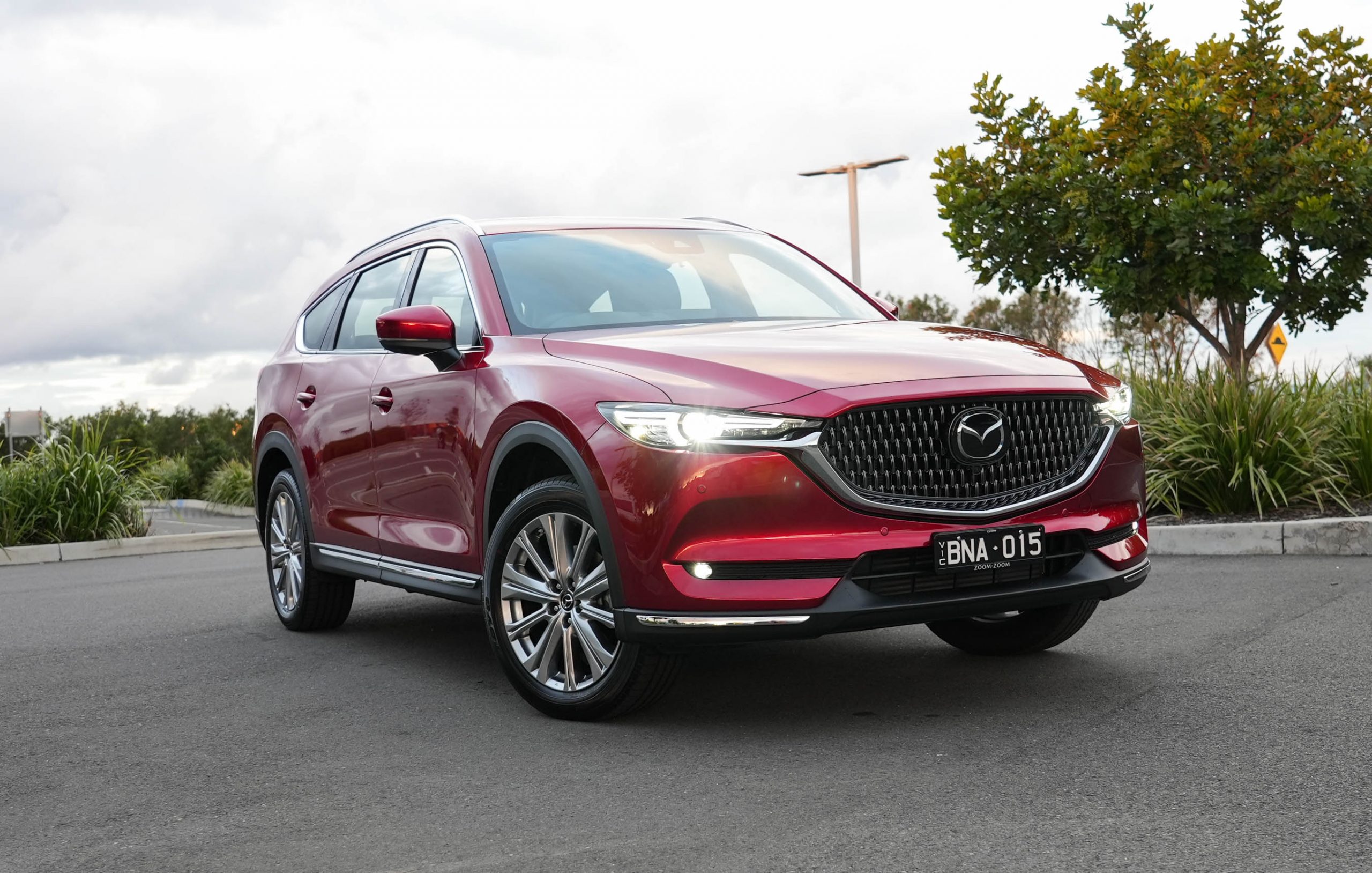 Australia is now a country of SUVs. One of our favourites for the last decade has been the Mazda CX-5. So, in 2018, the Japanese manufacturer extended the CX-5’s success by extending it physically to make a bigger CX-8. 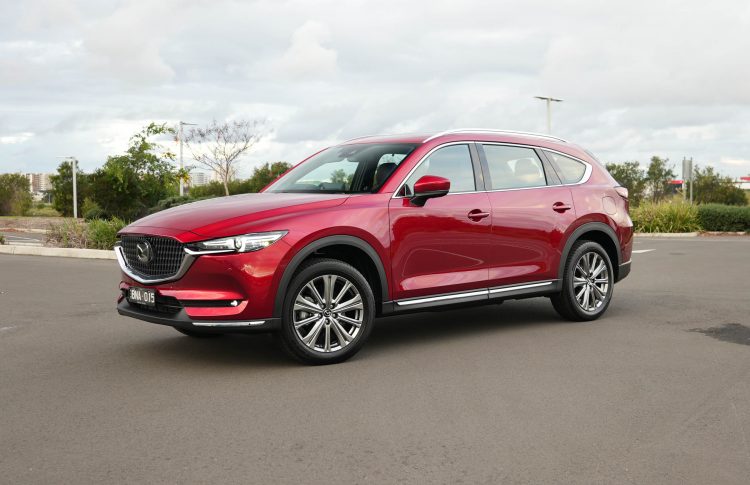 We hear you. Mazda already has a large SUV – the CX-9. But the CX-8 targets families who demand room and a third row, without the excesses offered in the CX-9. The CX-8 even looks similar to both, but it is 17cm shorter and 13cm narrower than its big brother. Luckily Mazda uses numerals in its model names, or we’d be confused by now.

For 2021, the CX-8 seeks a niche market among a busy lineup with a new top spec Asaki LE. Uniquely, it comes with a choice of six seats across three rows, or seven seats, with a heavy focus on luxury. Here, we’re testing the six-seater. It is offered with a 2.2-litre, twin-turbo diesel four-cylinder engine, a six-speed auto transmission, and all-wheel drive only.

* Figures based on 2018 Asaki AWD variant, as tested by PerformanceDrive on the day. Factory claims may be different 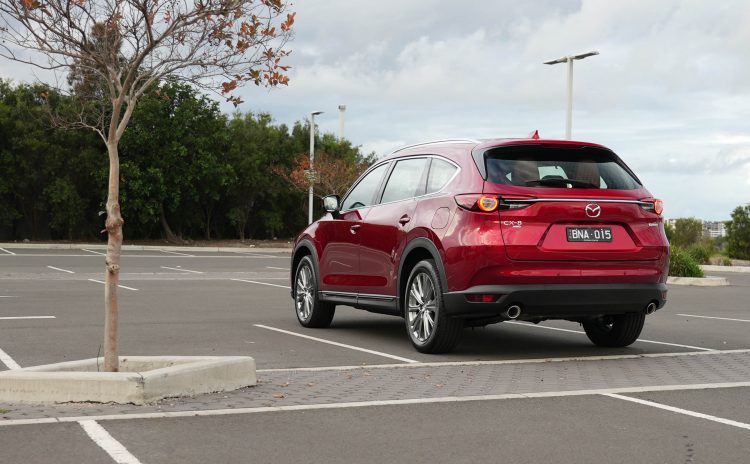 Mazda has long been a favourite in Aussies’ minds when it comes to external design. And all models share that similar design language, including the CX-8. It inherits a weaved glossy black grille, long and sharp headlights, and a bulging bonnet shaped like a bull shark. Many curvy contours flow along the body to produce a strong and fluid appeal. At the rear, slim taillights embed circular shapes to make an overall classy appeal.

On the inside is where you really notice the difference in the Asaki LE compared to the other variants. Its suave presentation took us by surprise for a Mazda, which is usually a vehicle for the ‘everyday’. Most notable is the luxurious Nappa leather quilted seating – it looks and feels exquisite. You can choose from Chroma brown or Pure white. It extends throughout the cabin with leather wrapped panels and touch points, and is comparable to higher-class SUVs that cost significantly more. 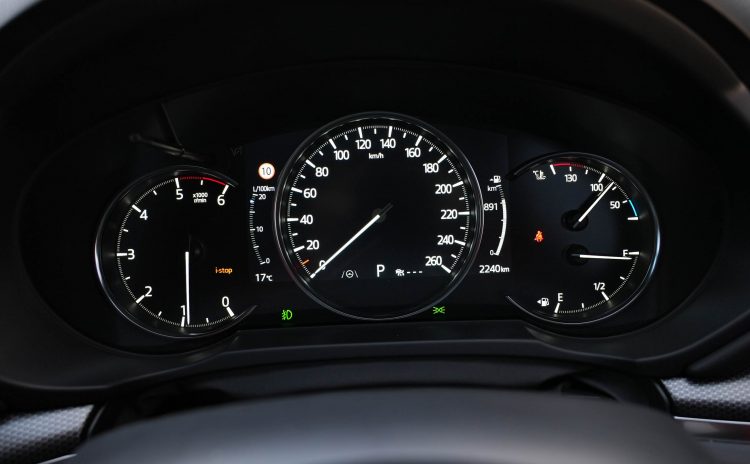 Of course, it is still a familiar and easy to navigate interior that is tried and won over by many already. It incorporates a BMW-like control knob that is used to pilot the generously sized 10.25-inch centre screen. We also see a crisp semi-digital instrument cluster. Oddly, there are two fuel gauges on display, although you can configure the theme somewhat.

For a brand not usually attributed to luxury, the price will be steep to some. But there is a load of tech and safety on-board the Asaki LE. And it all comes as standard. You score features like 19-inch alloy wheels, multi-zone climate control (including in the rear), heated and ventilated first and second row seats, rear side window blinds, first and second row electric seats, powered tailgate, a superb 10-speaker Bose sound system with sub-woofer, digital radio, Android Auto and Apple CarPlay, and a mobile phone wireless charger. 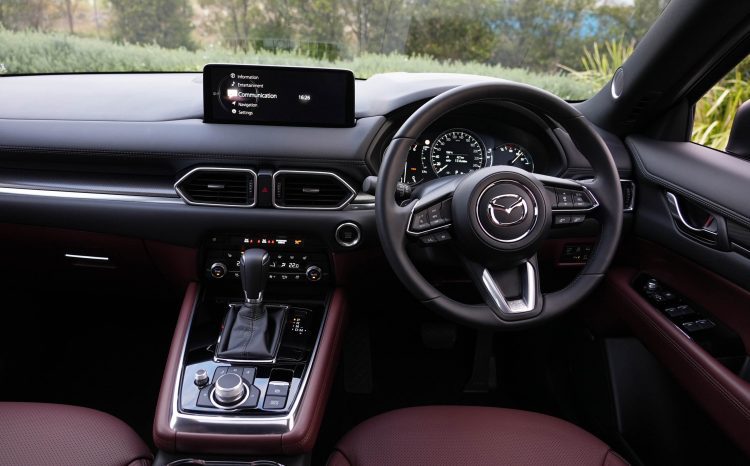 Having the six-seater option is an uncanny setup for SUVs. Usually it is straight up seven seats. With six it allows the CX-8 to concentrate more on comfort rather than the will to squeeze as many passengers in as possible. Sitting in the second row feels like being in a luxury minibus thanks to captain seats. They are electronically adjustable with their own settings, USB ports, ventilation, cup holders, and are ultra-comfortable. You’d be happy to drive for days in them.

There is a huge gap between you and your buddy as there is no middle seat. The third row also feels less claustrophobic as the space provides a more open feeling. It’s a clever idea from Mazda to differentiate itself in some way from the rest of the crowded market. 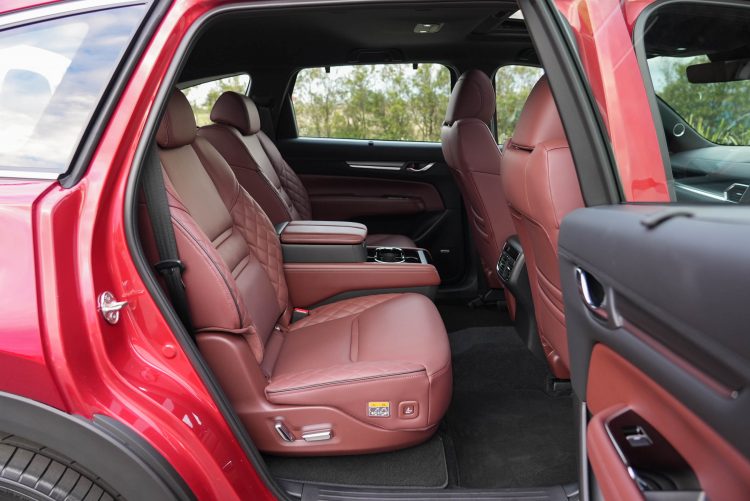 The only small qualm we have is that moving the second row out of the way to access the third row is fiddly. Being electrically adjustable, the seat is slow to move. You can deactivate the electric adjustment and manually move the seat, but it can only be done at certain positions and within certain parameters.

Mazda offers a five-year, unlimited kilometre warranty. However, servicing is required every 10,000km or 12 months, which is comparatively frequent if you plan to do lots of kilometres. 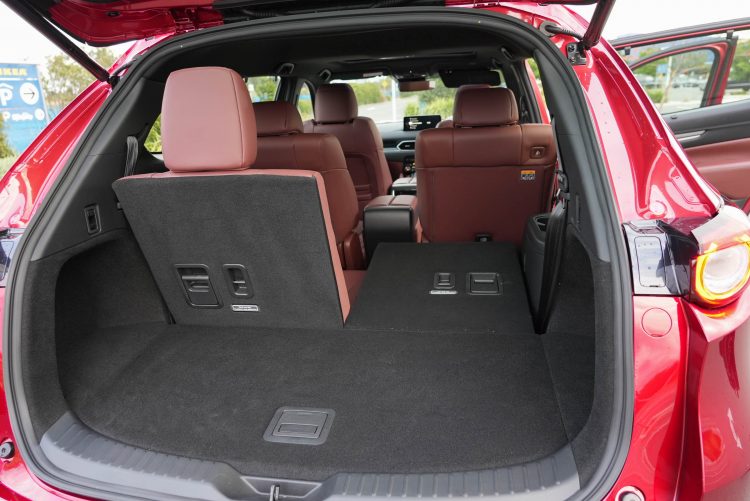 Mazda keeps it simple by offering only one twin-turbo diesel engine in the Asaki LE. And it would be the one to pick anyway. It produces 140kW of power and an explosive 450Nm of torque. Being less about power and more about torque, it pulls along like an ox rather than revs up for a fast sprint. It easily and satisfyingly keeps up with the demands of city traffic and long highway hauls. Although we didn’t specifically test this example, we have previously recorded a 0-100km/h time of 9.17 seconds in the 2018 Asaki, with the same powertrain configuration (video below).

Even better is the fuel consumption. Official average figures advertise a marvellous 6.0L/100km. Our average was slightly higher, but still creditable, at 7.0L/100km. These figures are about the average for this size of SUV, but a huge improvement for Mazda’s standards. And a large 74-litre fuel tank means that you should be able to travel more than 900km before needing to refuel (the official theoretical average range is 1233km).

Although six gears would be considered a low number compared with other SUVs on the market today, the engine ties with the gearbox blissfully. Gear shifting is so smooth and refined; you never feel it as a passenger – under light or heavy acceleration. It sets up the right ratio ahead of time before you accelerate out of a slow turn. But we can’t help consider that an extra gear ratio could only help fuel consumption further. 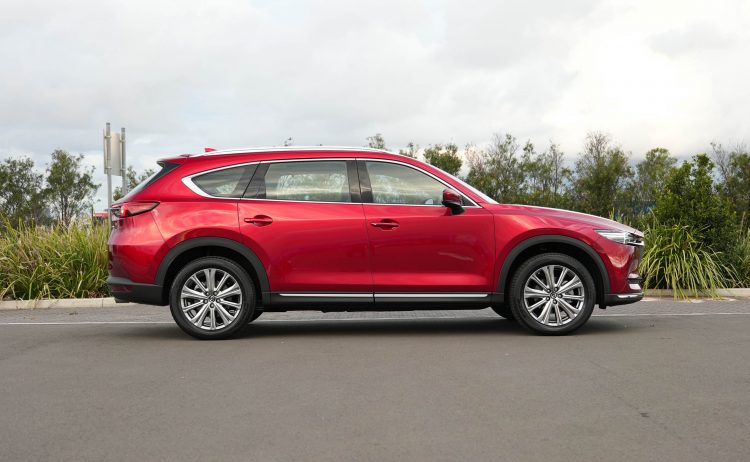 On the road, the CX-8 feels less bulky than the CX-9. As a result, keeping in the lane is less of an effort. Bumps are handled confidently and smoothly. Steering is appropriately weighty, and the right amount of feedback is provided when taking on corners hastily, until a healthy amount of body roll enters the equation. But it’s nothing unexpected from an SUV in this market. Road noise and vibration levels are minimal, which adds to the luxury atmosphere.

The top spec Asaki LE variant is only available in all-wheel drive as mentioned. But there are no selectable off-road modes or diff lock functions or anything serious. This reveals what Mazda intends you to use the CX-8 for: a luxury city people-mover. Sure, it will take on light dirt road adventures, but it is more designed to stick to the bitumen. Ground clearance is measured at a fairly timid 200mm.

As experienced in other Mazda models, the radar cruise control is temperamental on roads with gradients. It has trouble maintaining your selected speed. Even when no cars are in front of you, the speed fluctuates constantly with a slight incline or descent in the road, then you rarely end up travelling at the speed you desire. It could be intended to save fuel by allowing the car to coast downhill. But it becomes annoying when you simply want to get on with your journey.

The Mazda CX-8 Asaki LE is the vehicle consider if you have a family of six or less and would like an SUV with a heavy emphasis on luxury. The 2+2+2 seat layout is a brilliant idea to fit your clan in without being squashed. The rear seats are just a luxurious as the front, and they have all the knickknacks to keep your passengers comfortable and entertained for long trips.

Interior presentation is a standout for us, and it’s all included as standard – even Nappa leather. Which leads us to the price. It is quite expensive. We think the features and tech you get justify the price. But we worry that buyers might be hesitant in spending $70k on a brand that is not usually attributed to luxury and prestige. After all, for that money you could acquire an SUV from one of the known premium marques.

CONS:
– Price might frighten some, especially from a non-premium brand
– Time to update the old six-speed auto
– Finicky adaptive cruise control
– Seat operation to access the third row is touchy