The 2012 Formula 1 world championship will go down to the final race of the year in Brazil this weekend after Lewis Hamilton edged out Sebastian Vettel this morning at the United States Grand Prix in Texas. 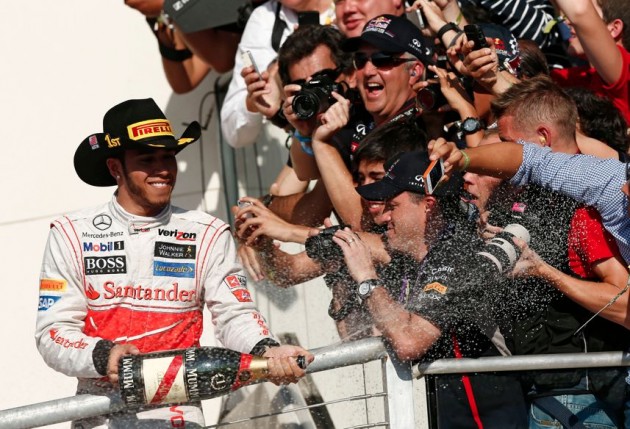 Vettel started the first ever Texas F1 race at the new Circuit of the Americas from pole and led Red Bull Racing teammate Mark Webber early, before Hamilton went on a charge.

After getting past Webber on lap four, Hamilton set about catching the world champion, and, on lap 42, he managed to get by the German thanks to his DRS.

The McLaren driver said he was pleased to finally get his first win since the Italian Grand Prix in September.

“Especially for me and my team, this is so special,” he said post-race. “It’s been a long, long time since I had a win and I’m just so proud, so proud of the work the guys did, so grateful for the support we’ve had.”

With Ferrari’s Fernando Alonso snaring third place after Webber’s Red Bull stopped with an alternator issue, the Spaniard has a mathematical chance of stealing the title off Vettel at Sao Paulo on Sunday.

Alonso said it will be Vettel’s championship to lose in Brazil.

“We will try to go to Brazil with the possibility to fight for the World Championship which is something that we fight for all through the year and we arrived in that fantastic position,” Alonso said.

“Only Sebastian is in a better position than us but we should be proud of ourselves so try to enjoy the Brazil race and do our best, fight all the race and see what is the outcome at the end.”

Sebastian Vettel said he’s confident he can hold off Alonso for the title in less than a week’s time.

“We’ve been very quick in Brazil the last couple of years so plenty to look forward to,” Vettel said. “On top of that, we increased our lead in the championship today so I think we are in the best possible position.”

Aussie Toro Rosso pilot Daniel Ricciardo was running as high as fifth place during pitstop sequences, but he ended up finishing 12th.

Red Bull Racing has secured the manufacturers world championship, but with Vettel leading Alonso 273 to 260, the German needs to finish at least fourth in Brazil to secure a third successive world title.