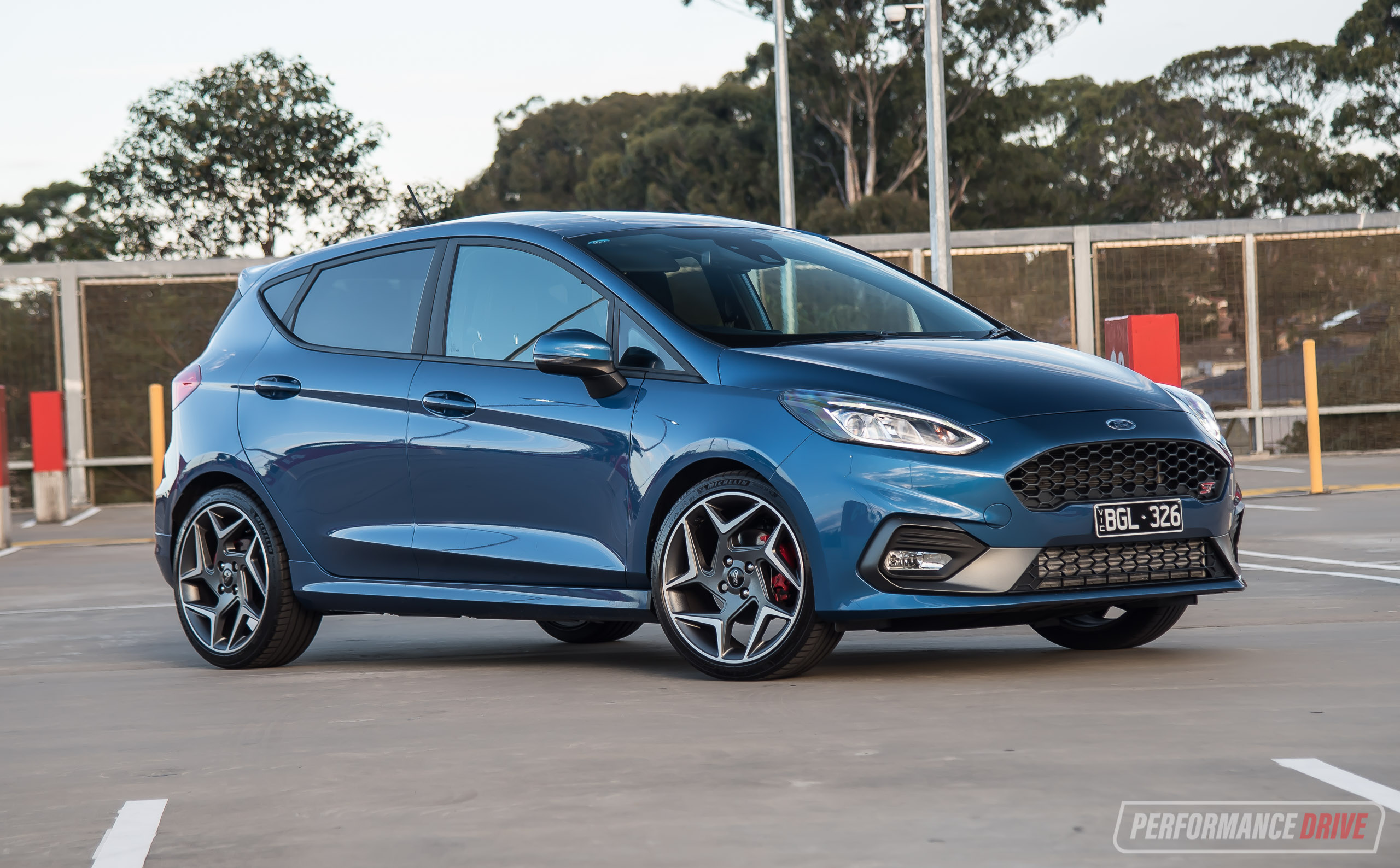 It’s definitely been one of the – if not the – benchmark vehicles in the compact hot hatch segment. But now there’s an all-new model. Can the 2020 Ford Fiesta ST live up to the fabled status of its predecessor? 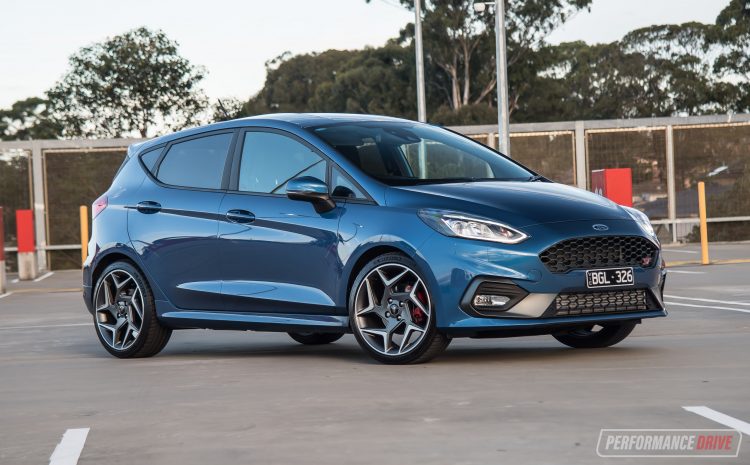 The new model really is an all new model. It’s now a five-door vehicle in Australia, as opposed to being a three-door only, with a new platform, fresh interior and exterior, and, under the bonnet, a new 1.5-litre turbo three-cylinder engine resides. Don’t worry. Just because it’s dropped a cylinder and 100cc of combustion doesn’t mean what you might think. This unit is actually more powerful than the previous 1.6 turbo four. More on that later.

Prices have climbed a bit since the previous model launched in Australia in 2013. That’s probably expected given inflation and whatnot, and the increased technology the new model brings. Even still, the ST now kicks off from $31,990, or around $4000 more than the predecessor. 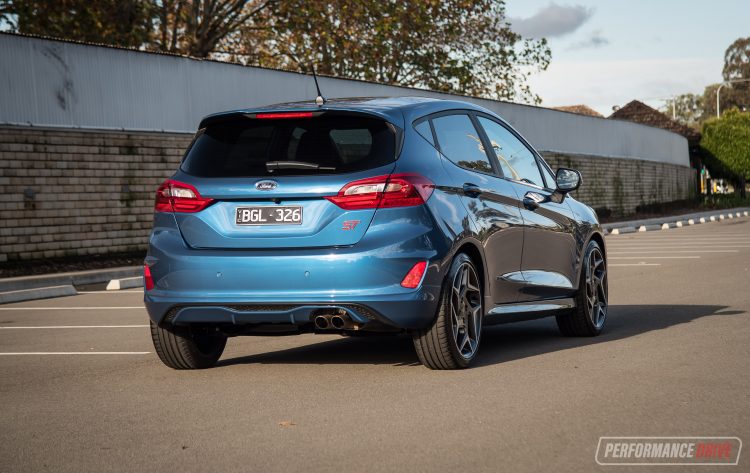 Firstly, the extra doors. We think they have slightly ruined the stance of the Fiesta ST, just in terms of the car’s presence. It doesn’t seem as low and fat as before. Instead, it looks a bit taller, longer and skinner. Obviously design is a subjective thing and everyone is going to see it differently, so we’ll leave it at that. On paper the new model is 93mm longer but also 26mm wider. Interestingly, the new model is 26mm lower in roof height as well. So really only the length is throwing off our perception.

The wheelbase is stretched 4mm compared with the old three-door model to accommodate the extra doors. We remember the old model did feature quite long front doors, whereas now the front doors are noticeably shorter. This does mean the doorway is narrower. Unless you’re quite largely-built or really tall, we wouldn’t say the narrower gap is a detriment to practicality. Once you’re inside though you might notice the B-pillar is right at your shoulder, whereas before it was behind you (for this shortarse writer anyway). 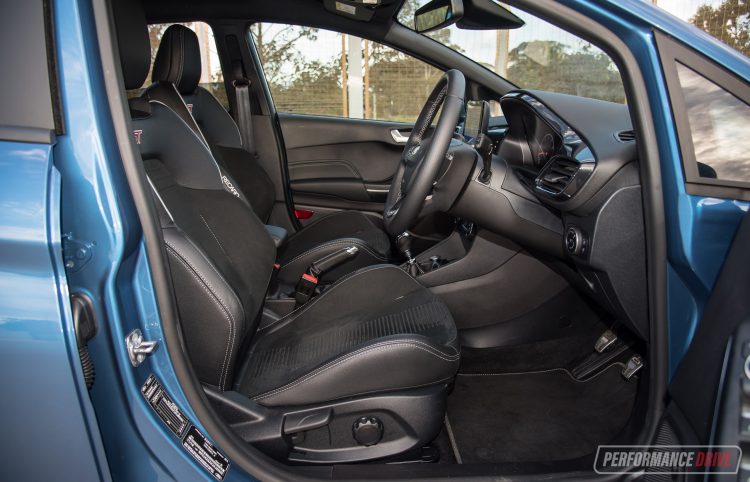 Ford has tidied up the dash and console layout drastically compared with the previous model. There’s still a separate climate control panel, which is great, but it is presented much neater than before and its controls are more intuitive to operate. The centre dash fascia doesn’t protrude anymore either, helping to free up space and clutter.

If you’re stepping into the Fiesta ST for the first time, you’ll appreciate the sense of spaciousness inside and the convenient storage pockets and cup holders. You sit quite low to the floor – and ground – and the chunky Recaro sports seats in the front hug you tightly. They aren’t too rigid, though. Recaro obviously knows a thing or two about seats, and uses soft padding in all of the important areas, while leather and suede trim sections provide both durability and grip. 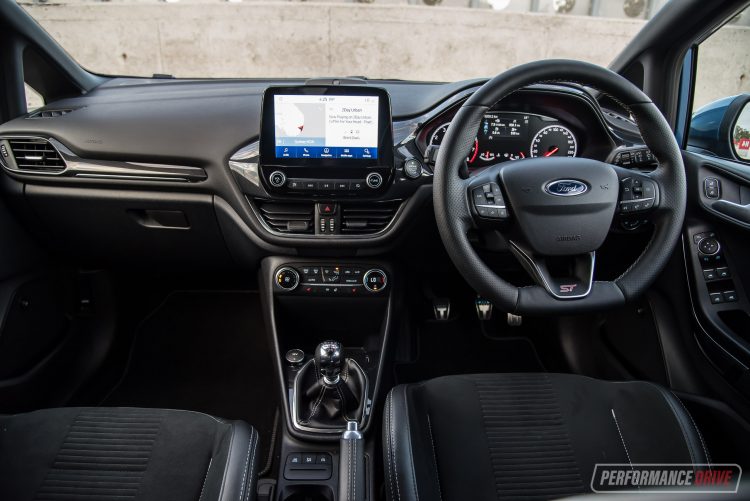 Rear seat space is very respectable for this class. And with rear doors, it’s no longer a major inconvenience for the front passengers each time someone gets in or out. A baby seat is also much more manageable. There are no climate vents in the back, but the cabin volume is pretty small so the front venting tends to reach the back without much trouble. Bottle holders in the doors come in handy as there is no flip-down centre arm rest with cup holders, but there are pockets in the backs of the front seats and a little pocket in the back of the centre console sized perfectly for a phone or two. 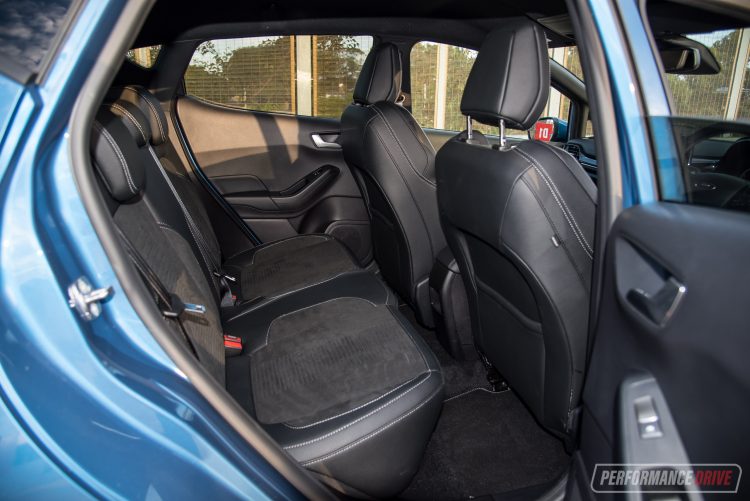 Overall practicality is highly commendable for this class and you could happily use this as a daily driver. We love the tall ceiling, the excellent visibility provided by the clever A-pillar design, and the automatic pop-out door edge protectors for the doors. We think Ford should install these door protectors on more of its vehicles, especially its mainstream hatchbacks and SUVs.

Boot space is measured at 311 litres (up from 276L in the old three-door model), with a space-saver spare wheel located under the boot floor. There are some hooks and straps available to keep smaller items secure. 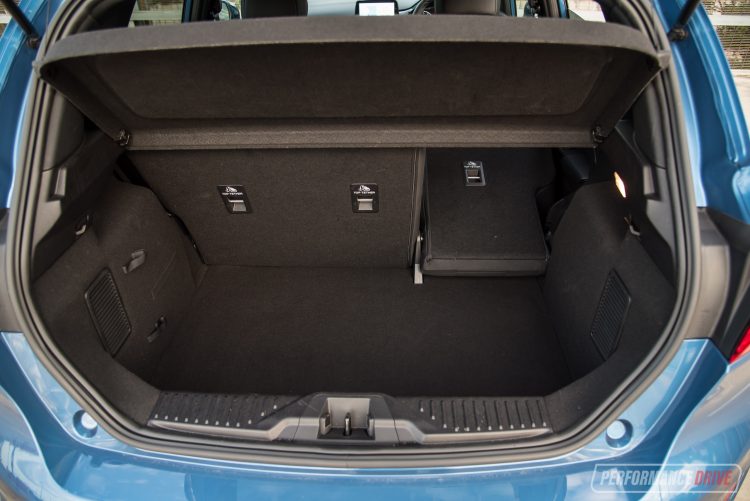 This is a very difficult section for us to write up. The problem is the old model was just so fantastic. There couldn’t have been much room for improvement, especially not at the risk of ruining something. And we hate for this to seem like a comparison, but we really, really loved the old model. We can’t help but compare it. We better start off by going over the engine specs as that’s one area that is fundamentally different from before.

Gone is the old 1.6-litre turbo four-cylinder and in is a new 1.5-litre turbo three-cylinder. Surely that’s a bad thing, right? Well, not really. The power of this new unit peaks at 147kW at 6000rpm, which was the same as the old 1.6 during overboost. The 2020 model is essentially able to provide 147kW whenever you hit 6000rpm. In the old model only 134kW was available while overboost recharged its batteries, so to speak.

A similar thing has happened with peak torque. It remains at 290Nm, however, the old model developed 240Nm outside of its short burst of overboost. All of that is now spread slightly thinner though, from 1600-4000rpm, down from 1600-5000rpm. Again, that’s only compared with the old model when overboost was ready to roll. If you compare it to the old engine when overboost was not engaged, this new unit has it trumped. 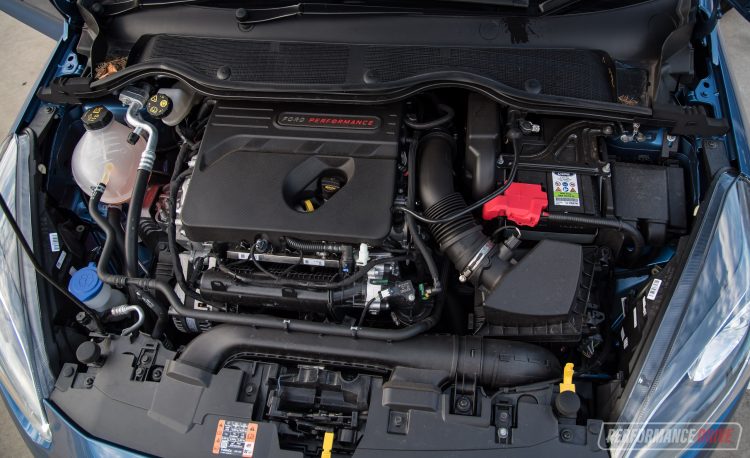 It is amazing that Ford has managed to basically extract more power and torque from a smaller combustion volume. Perhaps you’re expecting big fuel economy benefits? Well, that hasn’t really changed either. According to the official stats the new model uses 6.3L/100km on the combined cycle compared with a smidge less, 6.2, in the old model. Emissions are 144g/km in the new model to 145g in the old model. Hardly anything in it.

Across the standard 0-100km/h sprint we clocked a best time of 7.01 seconds. This was achieved by finessing the clutch and throttle with our foot rather than relying on the factory (and very cool) launch control mechanism. We have no doubt you could get that time down a little bit with more tests, but frankly, this was the best we could do without destroying the driveline – we did six runs. In the old model the best we did was 6.94. So what’s going on here? It’s the same bloody car! Hang on, that’s what we wanted wasn’t it? 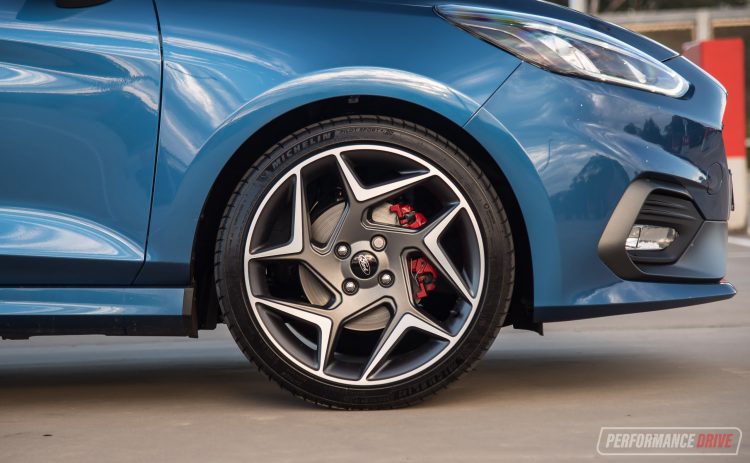 An area that is definitely improved is the drive experience. This little engine has a lot more character in terms of sound and output delivery. Although we don’t fully remember the old model in this area, this feels alive and ready to go. All the time. It just wants to go for a drive. Think of it as like an excited puppy ready to go for walkies. Let’s go. Come on. Now. I wanna go now. We’re surprised it doesn’t scratch at the garage door every morning.

There’s a strong feeling of torque which is incredible for such a tiny engine. All you need is 1600rpm and you have all of it. This means it is very easy to take off from the lights and so on. Sometimes the engine can seem rough and like it is bogging down, mainly due to its inherently unbalanced nature of being a three-cylinder. However, in most cases this is just a false sense of apprehension. The engine does deliver and progress will quickly follow.

Handling and agility is sensational. Ford has equipped the 2020 model with a tight Quaife limited-slip differential to make sure both front wheels are getting the power. There’s also torque-vectoring control, which essentially helps rotate the car a bit like how the left and right tracks work on a tank. And Ford has introduced something it calls Torque Steer Compensation technology. The steering rack is also 14 per cent quicker than before, requiring minimal input for a more responsive and reactive feel. 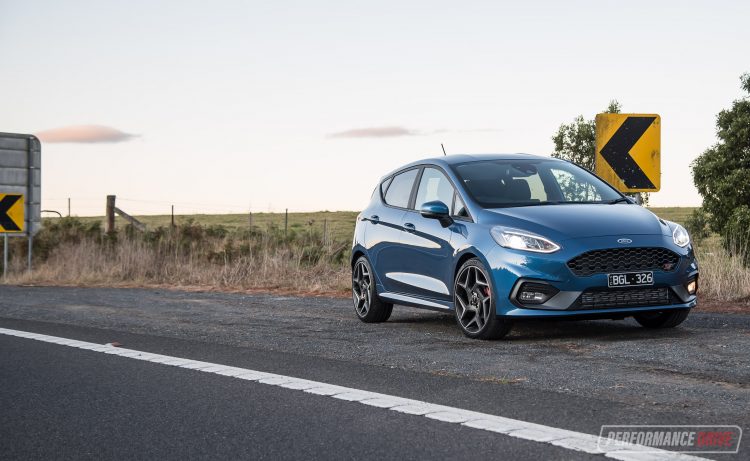 What it all means is you will likely run out of talent before the car does. It is such a playful yet confident machine to drive, at normal speeds and at stupid speeds. The grip levels are huge, partly thanks to the new 18-inch wheels (up from 17s) wrapped in 205/40 Michelin Pilot Sport 4 tyres. But if you want to kick the tail out via lift-off oversteer, simply hit Track mode and the safety systems will get out of your way. (Flicking to Track mode doesn’t change the ride or handling. Only the engine response, steering, exhaust valve, and stability/traction control are altered).

Since it only weighs 1217kg (kerb) the brakes have the stopping power and performance of high-end sports car brakes. According to our Vbox Sport the little ST can pull up from 100km/h in just 35.65 metres. We usually only see sub-37m from expensive and serious stuff, usually out of Germany where there are autobahn highways that are regularly driven on at very high speed. That low weight also helps with longevity, reducing the chances of fade or brake pedal drop. In other words, giving these things a beating isn’t really a beating, as the car isn’t heavy enough to cause stress.

We had such a blast test driving this little thing that we genuinely want to buy one, purely due to the fun and innocent thrills it provides. Maybe as an office car since it’s perfect for the city, but also practical enough for running errands. Obviously everyone would be trying to find an excuse to ‘need it’ for weekend ‘work’.

What a cracking little car. It’s easy to drive in mundane day-to-day situations, offering good visibility, a flexible engine, light clutch, and all of the latest on-board gadgets and technologies. It’s also lots and lots of fun on any spirited road, and delivers outstanding performance for its class.

We have to admit, it isn’t all that much better than the previous model. But there are tweaks and enhancements in all of the right areas to ensure it continues on the legacy into the next generation.

If you’re looking to buy a small, user-friendly car that’s also highly capable and properly engineered for fun, look no further. It’s very difficult to find any areas of disappointment with the new Fiesta ST. We just love it.