Of all the models Ferrari currently sells, the Portofino is the poser’s choice. Let’s face it. Even the name makes it seem more fancy than fierce. It’s also the slowest model in the showroom. This is clearly a vehicle for cruising the esplanade of an evening. A vehicle for fine dining. A vehicle to transport you to your yacht. After spending a couple of days with one, we found there’s actually a lot more to it than that. 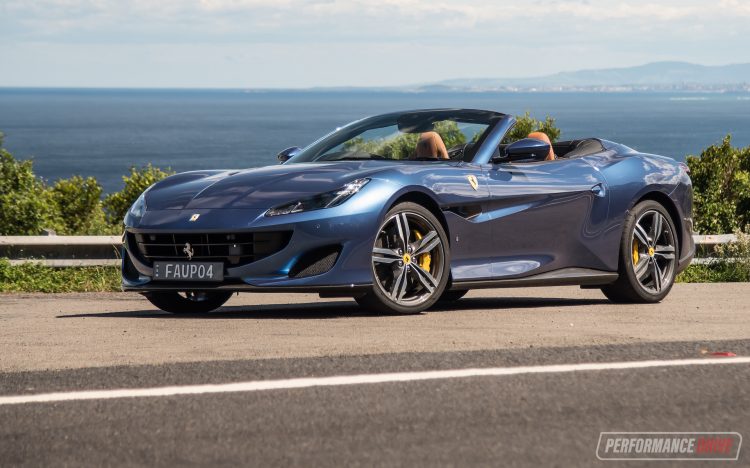 This is the successor to the California and California T. There’s a drastically updated platform which helps shed weight and improve agility, a new roof, and fresher and more convenient technology inside. The 3.9-litre F154-based twin-turbo V8 is overhauled too, so it now produces 441kW and a whopping 760Nm (up from 412kW/755Nm in the California T).

Ferrari only offers a seven-speed dual-clutch automatic with the Portofino, as well as rear-wheel drive for a traditional driving experience. Despite a heap of advances over the predecessor, prices have, surprisingly, dropped a little bit. The Portofino starts from $399,888, down from the $409,888 sticker price of the California T (excluding on-road costs). 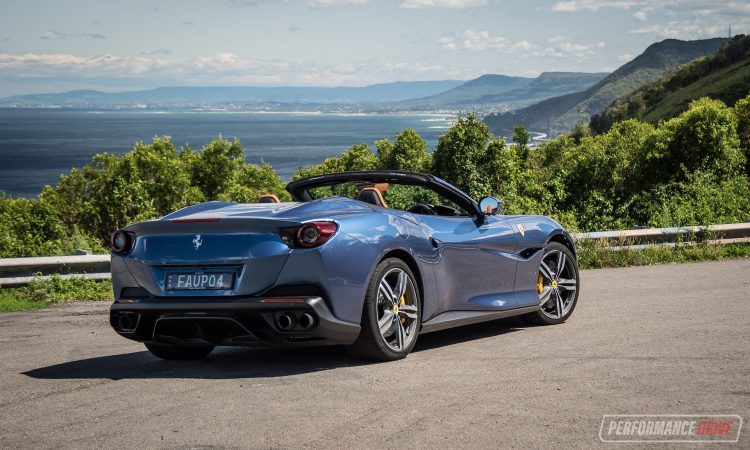 Engineers have evolved the 2+2 formula to yet higher levels, completely revising the platform. It’s now made from 12 different aluminium alloys, with hollow sand-castings to help increase rigidity and optimise weight. Body stiffness is increased by 35 per cent over the California T. That’s massive. Along with a more compact and efficient air-conditioning system, new magnesium-alloy seats, and other refinements in various areas, the Portofino sheds around 80kg compared with the predecessor.

It is still a 2+2 grand touring hardtop convertible, but even the electronic-folding hardtop roof has been redesigned. It takes around 14 seconds to peel back or restore, and it has been more cleverly packaged to maximise boot space. With the roof up Ferrari says the boot will accommodate three cabin bags, or two with the roof down. The volume is listed at 292L. 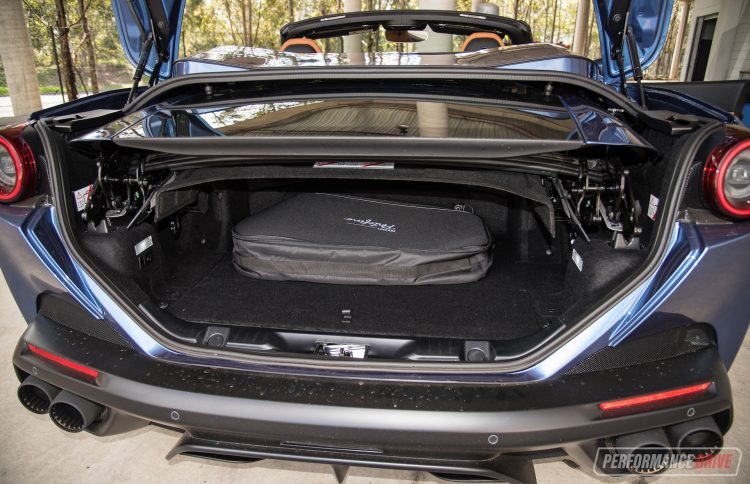 Also completely new is the design. It’s another work overseen by Ferrari’s in-house design chief, Flavio Manzoni. He’s responsible for most of Ferrari’s modern works, such as the LaFerrari, the 488 GTB, the F12 and FF, and even those stunning limited-production Monza SP1 and SP2 super sports cars.

I’ll probably wake up with a horse’s head in my bed for saying this but there are some angles of the Portofino that, I think, aren’t quite right. You’ve probably heard people say a car looks better in the metal. Well, I almost think the opposite for this; I think it actually looks better in photos. Particularly from the back. 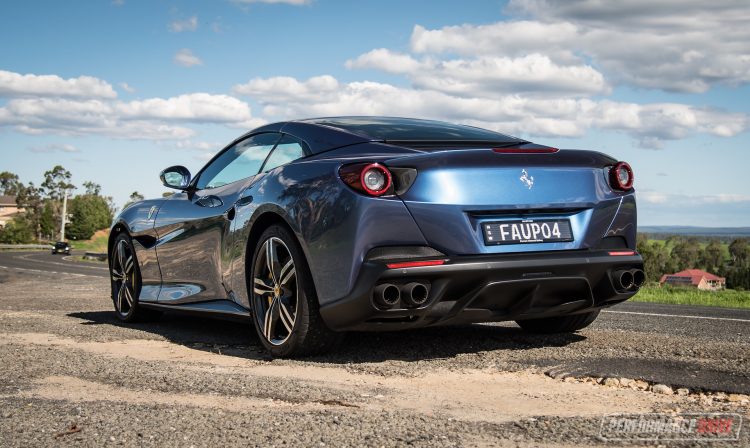 The way the rear wheel arch curves around, for me, doesn’t properly envelop the rear wheels, and at a difference axis. The rear deck also sits very high and wide, almost awkwardly. But that is a traditional Ferrari thing that traces its roots back to the Testarossa, F355, and even the F40. The front end, on the other hand, from all angles, looks downright sexy and aggressive. All in my opinion, anyway. I’m sure there are going to be plenty who disagree.

You (I) can’t argue against the sheer attention to detail, though. Check out the sculpting behind the front wheels, constructed of carbon fibre in this test vehicle’s case. And the rear diffuser looks like it packs its own rocket boosters. Even the headlights feature special detailing, complete with ducts that guide airflow. 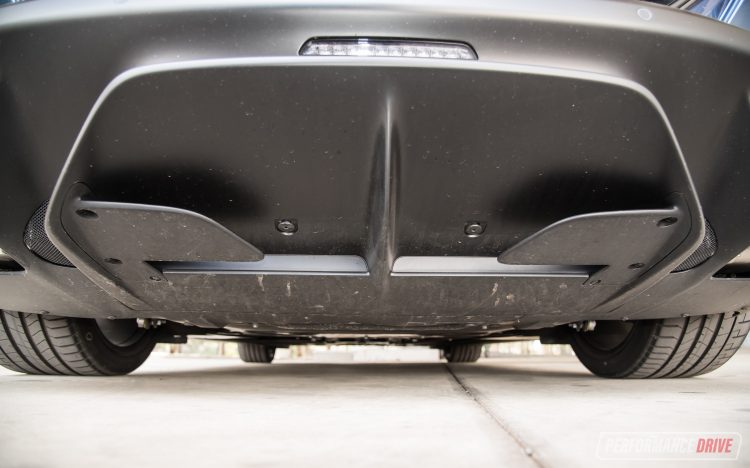 Ferrari says the aerodynamic development process for the Portofino involved every single area of the exterior, and that includes every single component and guard and nut and bolt under the body. Ferrari says all of it was crafted with a primary focus on aerodynamic efficiency with a particular emphasis on cutting drag, and keeping fuel consumption and emissions down.

The company says this was a challenge as engineers also had to think about heat management, especially as the engine is more powerful than before. Not only did the team succeed, the Portofino is 6 per cent slipperier than the California T. It achieves a drag coefficient figure of 0.312. 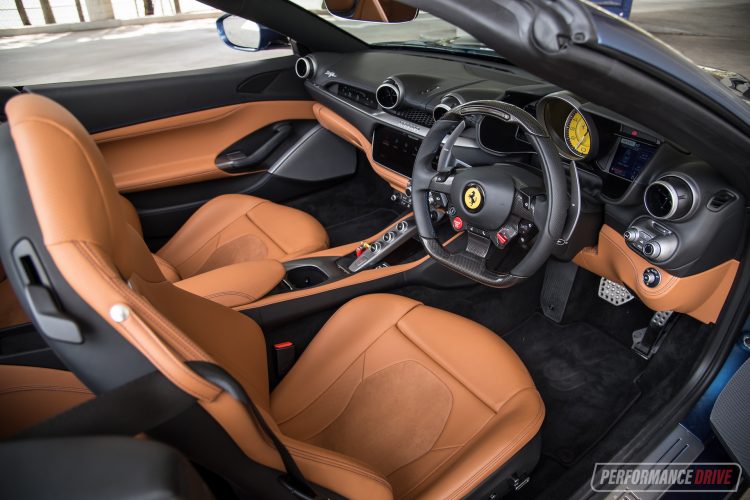 As for the interior, what can we say. It’s a work of art, celebrating prestige and exuberance. A new 10.25-inch multimedia touch-screen is much improved over the California T’s setup. The design of the screen is blended more elegantly within the dash as opposed to the old double-din-style system in the T. We like the little menu cluster with the home button below the screen as well, as it does reduce distraction by minimising the time spent hunting around within the screen menus.

Up in front of the driver you have perhaps the grandest and most satisfying gauge of all motor vehicles. The famous yellow rev counter. It sits large and proud, right in the centre. And it’s not digital, thankfully. If you’re looking at one of these on a regular basis you know you’ve done pretty well in life. Besides this, physically, are a pair of configurable digital screens. 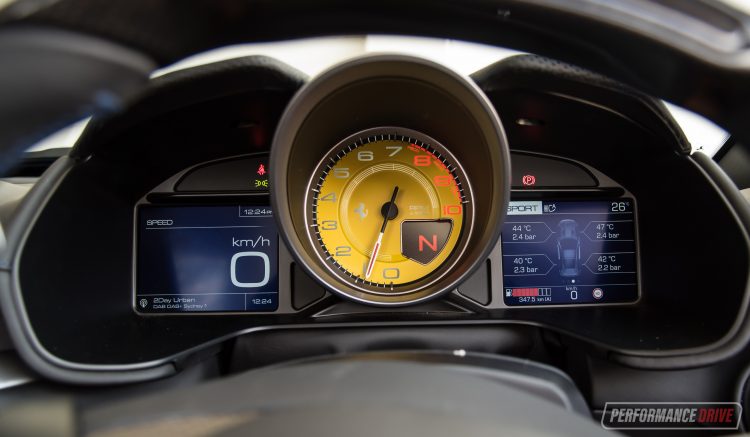 We’re not a huge fan of the fiddly navigation module that you use to toggle through these side screens. The module doubles as the cruise control activation point and this can get confusing. But you quickly get used to it. Graphical presentation is crisp and clear, and there are some interesting readouts to view, such as real-time turbo boost pressure (in bar), oil pressure and temp, and the usual trip info.

This engine is a mechanical masterpiece. Firstly, the capacity is only 3.9 litres, which isn’t that large. But it does feature two IHI twin-scroll turbochargers. These run at a maximum of around 1.0bar/15psi (according to the on-board boost gauge). There’s also Ferrari’s latest continuously variable valve timing on both the intake and exhaust sides for the 32 valves, two air-to-air intercoolers, direct injection, and dry-sump lubrication with a flat-plane crankshaft. The latter causes the engine to produce an unusual, almost V6-like soundtrack and fast-revving characteristic.

On full throttle the engine develops an awesome 441kW at 7500rpm. However, what’s more impressive is the peak torque of 760Nm. That’s a monstrous figure for a 3.9L engine. Ferrari has developed a new boost management system for the engine so basically all of that torque isn’t released until third gear and beyond. This has allowed engineers to install taller high gears to improve economy (and speed), while low down the management system controls the torque curve for optimum response and strong, continuous acceleration. 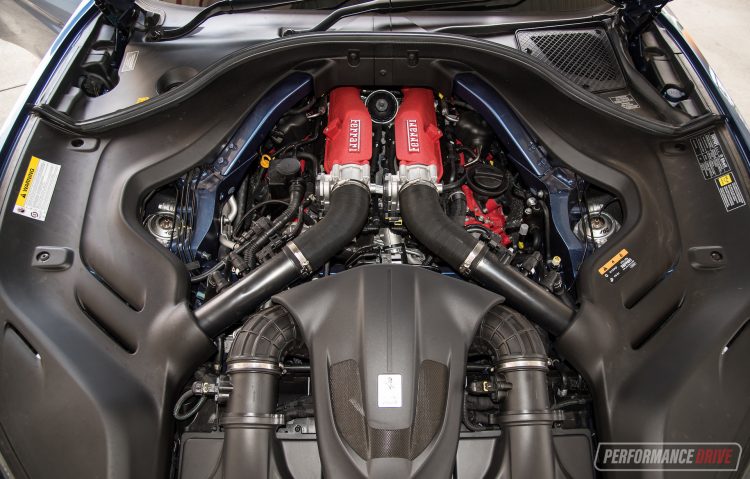 Ferrari says the engine uses its “zero turbo-lag” philosophy too, promising throttle response in under 1 second. It does feel immediately powerful and as progressive as your right foot can move. In some gears though there does seem to be some ‘comfort’ tune calibrated into the dual-clutch transmission, which could be taken as turbo-lag.

Off the mark you can floor the accelerator pedal, with the traction control turned off, and the clutches will grab gradually enough for a smooth getaway. We were expecting it to instantly light up the rear tyres. That would obviously be wasteful and not in line with maximising the performance. Ferrari is obviously well on top of this.

Across the usual sprints we found the standard launch control system, predictably, produces the quickest results. For the 0-100km/h run the best the Vbox Sport showed was 3.53 seconds, which is exactly what Ferrari claims (3.5). We also saw 0-200km/h come up in an incredible 10.73 seconds, slightly better than Ferrari’s claim of 10.8. The quarter mile came up in 11.44 seconds at, get this, 206.3km/h – there’s that top end that Ferrari has worked in. 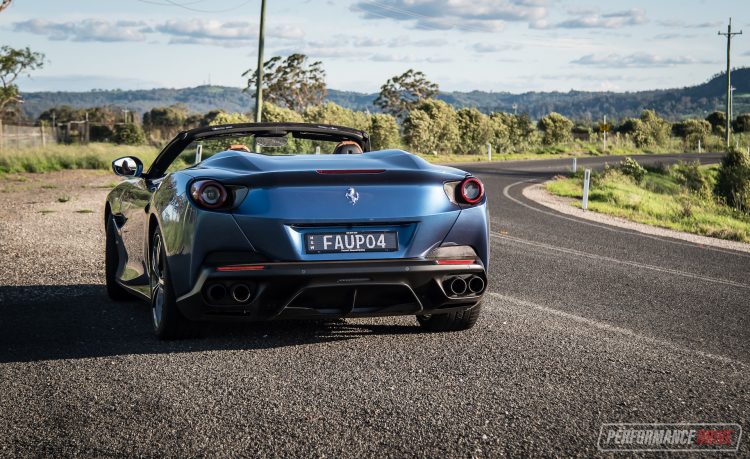 Out of curiosity we also conducted a 0-100km/h run without launch control, simply stomping on the throttle (in race mode/ESC off). It did 3.89 seconds. If there is any turbo-lag in here, it is clearly below one second, as Ferrari says. That’s considering 3.89 seconds minus 3.53 equals 0.36. And that doesn’t take into account the more gradual clutch engagement that you get without launch control.

Obviously the engine is always going to be the heart of a Ferrari, and it feels it in the Portofino. There’s that distinct high-pitch sing at high revs, with plenty of snarling and pops and whistles, and general theatre, lower down in the revs. The unit is very refined as well and will happily plod about in town. You can leave the transmission in auto mode and it behaves just like any other high-end luxury car. 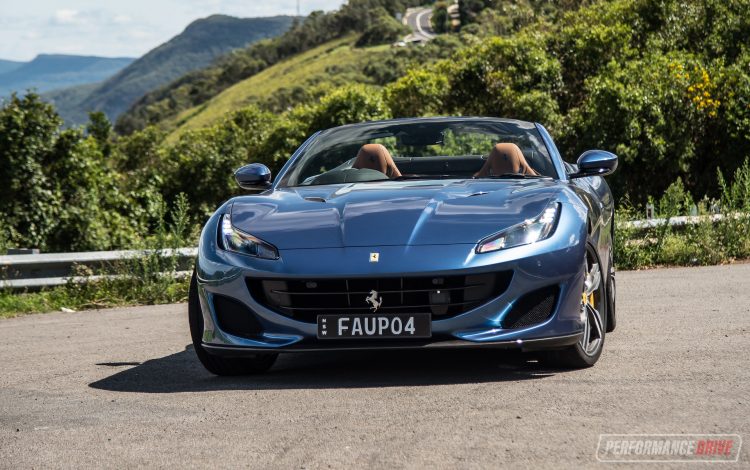 There aren’t many automotive experiences in life that are as exciting as driving a Ferrari down a spirited road with the roof down. It is surreal. Goosebumps are sent rippling down your neck and through to your spine. Sure, the speed and acceleration is sensational. But the handling is also amazing. Mind-blowing, in fact. All of your senses are stimulated in a way that’s difficult to explain. Perhaps the aura of the Ferrari heritage emanating helps, too.

You do sit quite low and, what feels like, slightly behind the mid-point of the car. This gives you rollercoaster-like g-force as you sling around corners. The amount of grip is relentless. We were expecting it to be a bit snappy in the tail, in a good way. Not so. You can really put your boot in and the Portofino just hooks up and catapults to the next corner. A lot of this is thanks to a third-generation electronic differential, called E-Diff3. 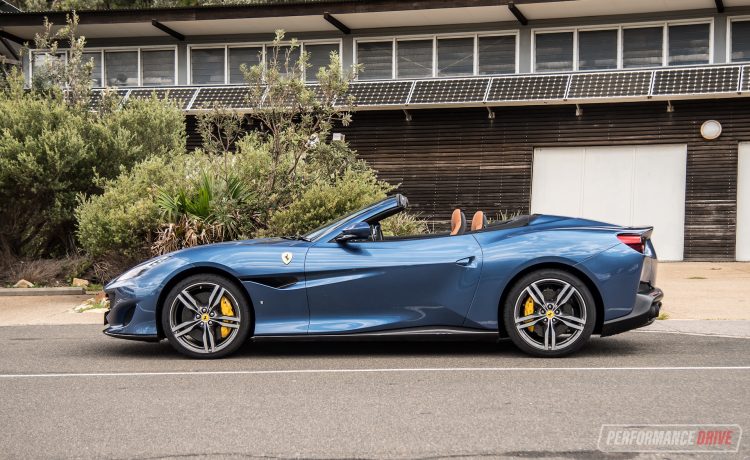 With the stability control off (race mode) you can of course provoke controllable and highly rewarding oversteer, especially in the lower gears. About the only area that might be unsettling, as first, is the sheer sharpness of the steering. The Portofino debuts electric power steering for this model line, and it is super quick. You only need to make very fine adjustments to get the front end to dart where you want it to go.

During oversteer you do have to be mindful of this. Dialling in opposite lock is no issue, but when it comes time to return the steering to centre you have to be careful not to over-shoot the centre point, or return it too quickly, which is easy to do. Obviously this is something you’d get used to over longer-term ownership compared with our test drive.

Fold the roof back up and you have yourself a more modest yet very glamorous grand touring coupe. There’s minimal wind noise, although there are some creaks and squeaks from the roof panels as to be expected from a convertible. Aerodynamics are obviously superior with the roof up so you can get to the 320km/h top speed, where permitted, more easily. Headroom remains pretty good in this mode as well.

In the glitz and glamour world of exotic grand tourers, the new Ferrari Portofino promises to dominate the segment with a perfect combination of outright performance, versatility, driving pleasure and on-board comfort. We think the Portofino fulfils this promise comprehensively. It is stunning to behold, oozes luxury and affluence, but it also goes like a keen cheetah when you put your foot down. It’ll no doubt live on to be a future classic, and a highly desirable and very modern machine in the meantime.