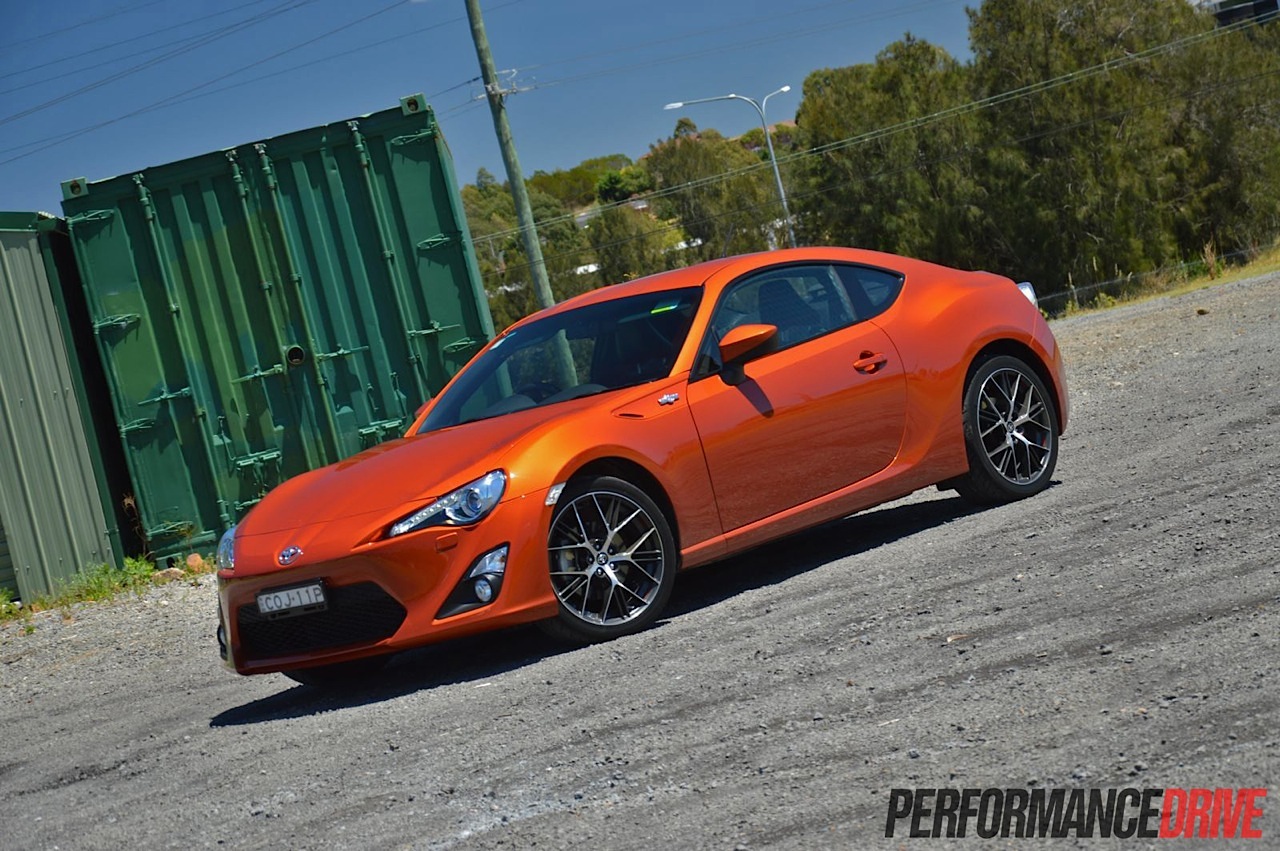 Since its debut last year the Toyota 86 has been an absolute mecca for aftermarket tuning enthusiasts. In fact, it’s so ripened and ready for upgrades even Toyota is tweaking the popular coupe. Introducing the 2013 Toyota 86 GTS ‘Tada prototype’; a potential preview to an optional enhancement pack. 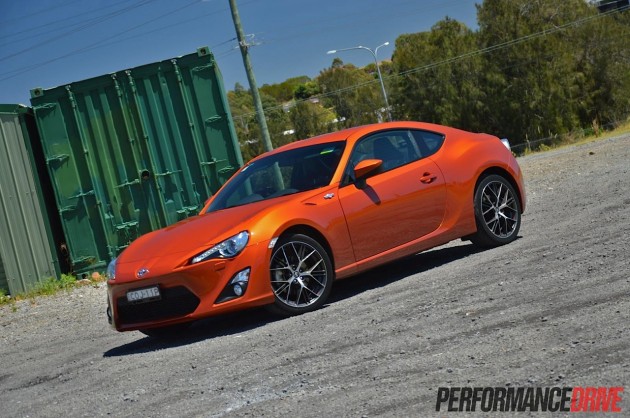 When Toyota first launched the 86 last year it openly said the base model GT was designed to suit the younger generation buyers and those who like to tune and tweak cars. And so for this reason, the GT comes with puny 16-inch alloy wheels with cheese-cutter 205-wide tyres and a basic yet driver-focused interior – all ready to be customised with replacement parts. The GTS comes with a few more bells and a whistle or two over the GT, but the same raw essence remains.

This particular GTS you see here is something quite unique. It’s a prototype showcasing a few aftermarket bits and pieces hand-selected by Tetsuya Tada, the car’s chief developer. For those that want aftermarket-style tuning but don’t really know where to start or where to go, Toyota may soon offer the enhancements as an option. Think of it as like an ‘and here’s one we prepared earlier’, for the aftermarket world. 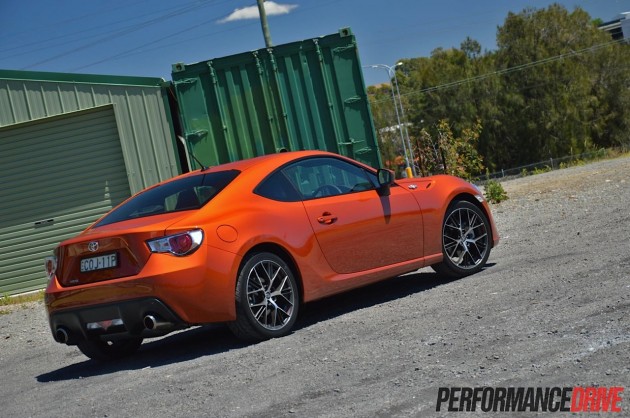 You’ve probably heard the endless praise given to the 86 over the past year. And for good reason. Its basic foundations are so pure, it’s like it has all been pulled straight from the first page of the sports car text book; front-engined, low profile body, long bonnet, rear-wheel drive, two-seat cabin (or there abouts).

With these ingredients laid on the table Subaru and Toyota have done an excellent job of organising the concoction into a true modern-day classic. The engine is a 2.0-litre boxer four-cylinder (flat) to keep the centre of gravity low, while all models now come with a limited-slip differential at the back to ensure maximum rear end maneuverability and traction – great for donuts too.

The predominately Subaru-engineered engine comes with direct injection and a high 12.5:1 compression ratio, resulting in 147kW at 7000rpm and 205Nm from 6400-6600rpm. The engine is the same for the GT and GTS, and the Subaru BRZ as well as this prototype.

Instead of concentrating on more engine power for the prototype, Tada wanted to focus on the car’s handling talents and amplify them to new levels. So, underneath features a custom suspension setup with Sachs dampers and firmer springs at all four corners, as well as a more aggressive tyre and wheel package including lightweight BBS 18-inch alloy wheels wearing Dunlop Direzza 215-wide front and 225 rear tyres. 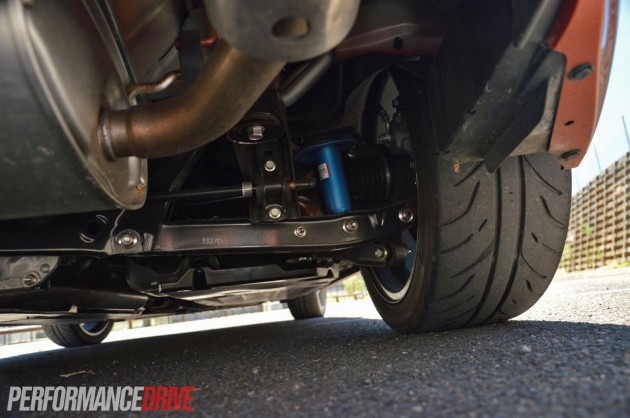 Other than that, the prototype falls back onto the GTS specification. That means there’s a typically fidgety Toyota multimedia interface inside with sat-nav, which looks like it has been pulled straight from a JB Hi-Fi catalogue, and a number of minor luxuries and conveniences to keep the passengers happy.

Navigating your way through the interface menus and options can be a little frustrating as some of the buttons are very small and require a stylus-like finger touch. It does offer USB, MP3 and Bluetooth connectivity, and there’s even a DIVX video decoder embedded within.

Sitting in the 86 has always been a pleasurable experience, especially for driving enthusiasts. The cabin offers that reassuringly sporty seating position which requires you to climb right down into the cabin, like you’re sitting in a race car.

In the back, you can pretty much forget taking people along. The rear seats are really only suitable for children or as storage solutions for your helmet. Legroom is severely limited and headroom isn’t much better.

The Alcantara sports seats in the front, with heaters in the GTS, are well bolstered. Like in many Japanese vehicles, they are on the small side, which means those of you who carry a bit of extra girth around the hips and shoulders will find them a touch tight. Headroom and legroom in the front is pretty good.

Once you’re in, the dash is presented in front of you in a clean and clutter-free manner, without being intrusive nor too far out of reach. It’s an indefectible driving position, and totally suited to the way this car drives.

Other creature comforts include dual-zone climate control for the GTS, some red stitching here and there, a trip computer, voice recognition, and enough airbags and safety devices to keep ANCAP satisfied enough for a five-star rating. 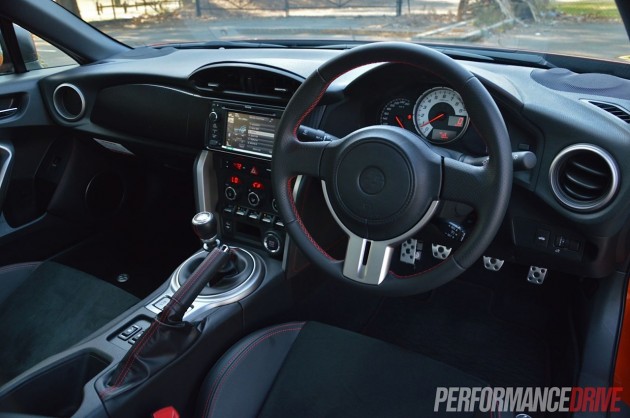 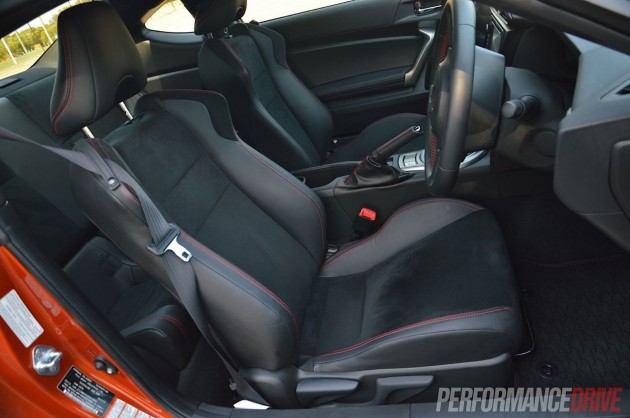 Starting the boxer engine isn’t all that exciting. It throbs with a somewhat lazy four-cylinder pulse, sounding a bit like a washing machine. Even when it’s warmed up and you give it a rev, it’s not all that responsive; you can almost hear each piston gather momentum, in Subaru fashion you could say. Boxer engines sound fantastic in six cylinder form, but with just four firing away, it’s certainly not an exotic soundtrack in our opinion.

Stick it into first gear using the sturdy yet notchy six-speed manual shifter. Give it a bag full of revs. And release the clutch. It’ll scurry away off the line with a hint of tail kick. It’s from this moment forward that you become transfixed and amazed by what has become your own real-life car game.

Toyota and Subaru have done an excellent job developing the driving characteristics, and in particular, the steering and handling. It’s pin sharp but also quite playful. You can feel what the front tyres are doing at every moment of your drive, and in the case of this prototype with the Dunlop Direzzas, they bite the tarmac allowing you to clip every apex.

There is no body roll whatsoever thanks to the firm Sachs suspension. There’s almost no need to be cautious leading into a bend as it doesn’t matter if you’ve come in a little too hot. The front wheels and the body remain planted and on track.

In saying that, the handling is versatile as well and allows plenty of movement if you ask for it. You can shift the car’s weight around by abruptly feeding in steering, putting the car into a squirmy slide, from which point it tends to regain itself almost immediately.

Push even harder with the stability control switched off and use a liberal dose of throttle and you can send the tail out for an easy-to-control drift. The engine isn’t torquey enough for things to get out of hand. In fact, it is quite hard to get yourself into a spin. If you’re not too confident Toyota offers a ‘VSC Sport’ driving mode which leaves the electronics engaged but they allow some slip before intervening.

Maximum torque is reached at 6400rpm which means if you want to powerslide, you need to make the car very aware of your intentions by mashing the throttle before the apex, or by using a bit of lift-off oversteer to get things going. The old Scandinavian flick also works a treat.

Keep those revs high and the 86 can be a drift master. It won’t snap or bite halfway through. It’ll just keep drifting until your heart has had enough joy for the moment. 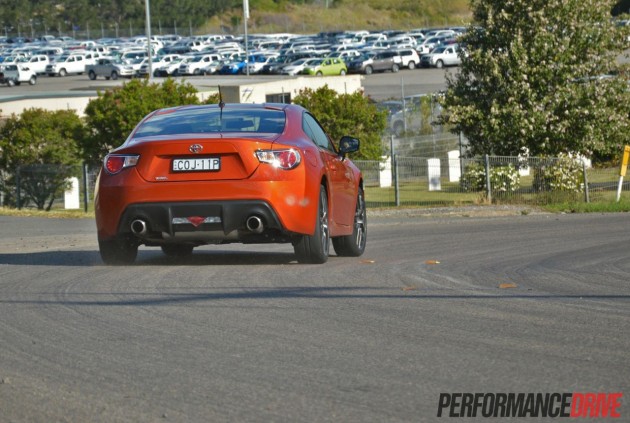 The brakes aren’t anything special to look at but they do a good job, time and time again. We ran a few overly stressful braking tests in this test car and the brakes showed very little sign of fade or pedal drop.

Like we said at the start, praise never seems to run out for the 86. Could it be better? For us, we’d like to see a more refined engine. 147kW is perfect, but power and torque delivery is not quite. There seems to be decent low-range torque and it peaks at 6400rpm, leaving a noticeably weak mid range.

The engine does give off some vibrations too, and its soundtrack spectrum sounds like it goes through a range of things that aren’t related to sports cars; a washing machine, a belt sander, and onto an outboard dingy in the higher revs.

So what about this prototype. Should Toyota put it into production? We think, for sure. For those that want to take the 86 to the track or want to enjoy more than the odd weekend drive, the suspension is properly firm and ready to support any vigorous driving stints you plan on undertaking, even motorsport competition and rally.

There has been some speculation the enhancements may become part of the GTS package in the future. We think they are perhaps too serious for an everyday car though.

A big chunk of 86 buyers probably like the car because it’s a cool, sexy-looking coupe with real sporty credentials. However, there’s a chance not all buyers want to spend time bashing corners and hitting hill climbs. And for those, the suspension on this prototype is simply too firm to provide comfortable everyday commuting. 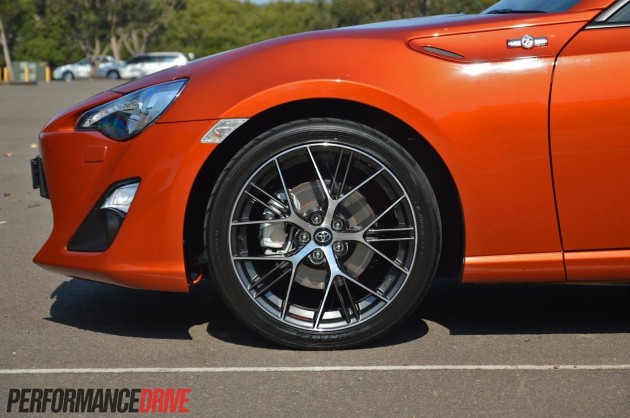 You don’t need our confirmation that this is a fantastic car. So far this year Toyota Australia has sold 6283 examples of the thing (as of November VFACTS figures), making it quite easily the most popular vehicle in the below-$80,000 sports car segment.

It’s a genuine fanatic’s product, and it can be enjoyed no matter what skill level driver you are. It’s also reasonably priced and comes with the renowned reliability and quality of Toyota.

As for this prototype, Toyota should introduce the elements seen here as an enhancement option. We think it would be best appreciated as an option as opposed to becoming standard kit as it might be too focused for some buyers. In that respect, the enhancements do take away a bit of the 86’s everyday practicality. 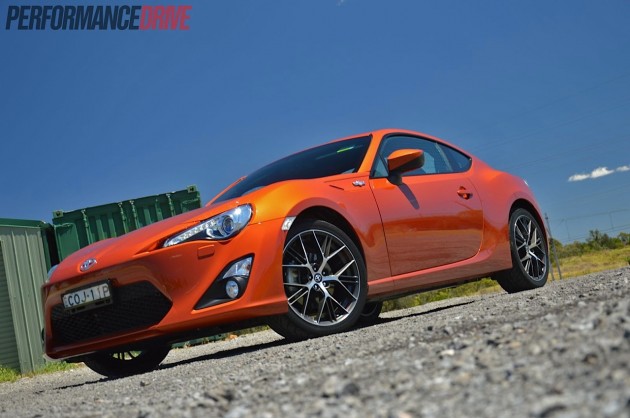