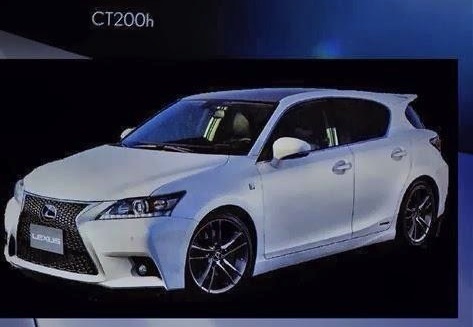 An alleged brochure scan has been leaked online potentially revealing the face of the upcoming 2014 Lexus CT 200h hybrid hatch. This could be the first time the facelifted model has been seen.

If the image is legit, it looks like the CT 200h will receive the company’s latest front end design language including the new spindle grille layout. As you can see, the large grille spans from the bonnet all the way down to the tip of the front spoiler.

The car in the image seems to be the F Sport version, judging by the darkened alloy wheels, the big black front grille, and the traditional square ‘F Sport’ badges on the front guards which you can just see.

Details of the new model are yet to be uncovered, however, it’s believed Lexus will be making some packaging revisions to the next model to give it a competitive edge over its main German rivals.

The powertain is likely to remain unchanged, retaining the current 1.8-litre petrol four-cylinder and electric motor assist system. Peak output is rated at 100kW, with 0-100km/h coming up in around 10.0 seconds.

If the image is official, we could see a full unveiling in the very near future. We’ll keep you updated.