Lexus might be late to the class but it has certainly arrived in distinctive style. The Lexus UX is the newest model in the showroom, showcasing the freshest version of the ‘YET philosophy’ design approach. 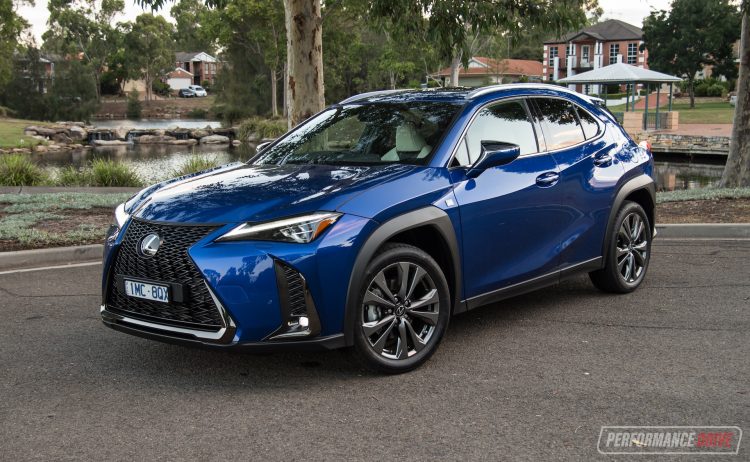 The YET philosophy is all about providing balance and versatility without compromise. For example, Lexus designers worked to blend the boundaries between the exterior and interior, described as ‘exterior YET interior’. There’s also “rugged SUV YET dynamic car” and “stylish YET functional”. This approach is applied to many areas of the vehicle.

Two versions are on sale in Australia; the UX 200 and UX 250h. Since they arrived here at the start of the year, sales are off to a good start in Australia. At the end of April the UX sits in sixth spot in the ‘SUV small above $40k’ class, out of 10 contenders. It has tallied 584 sales. The Volvo XC40 is the best-seller so far in the class, with 985 sales year-to-date. But, the UX sits in front of models such as the Jaguar E-Pace (326 units) and the Audi Q3 (208 units), so that’s pretty good considering they’re both more established models.

What we’re testing here is the UX 200. It’s available Luxury, Sports Luxury, and F Sport trim. All UX 200 models are front-wheel drive, but if you desire the added traction and safety of AWD you need the 250h, which is available in both FWD and AWD. Prices for this F Sport version start from $53,450. 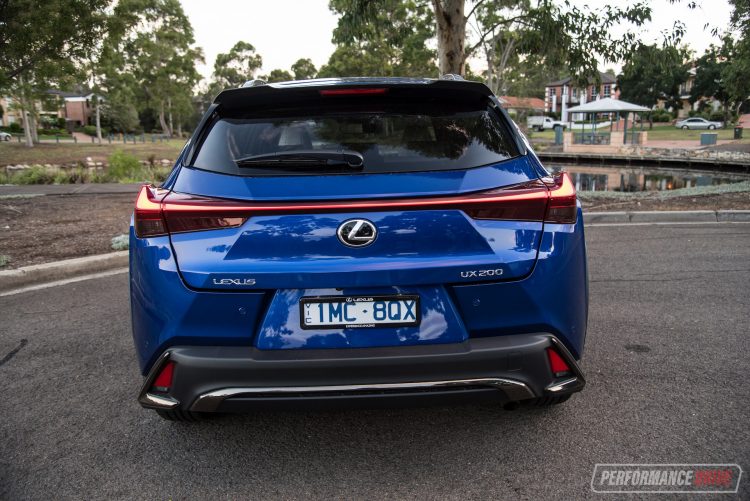 Like with all Lexus models, the F Sport trim line comes with some uniquely sporty exterior and interior garnishes. On the outside you’ll notice 18-inch alloy wheels finished in fashionable gunmetal grey, while that unmistakably massive front grille, as well as the window trims and top halves of the side mirrors are in gloss black. Both the front and rear bumper bars also feature unique sculpting.

The overall design of the UX is definitely loud and certainly steps in unique tracks compared with the common rivals. We think it’s probably one of those designs that people are either going to love or hate, with nobody sitting on the fence. As a supporter of those sitting on the positive side of the fence, we’d encourage those on the other side to spend some time to take in the finer details.

Yes, the plastic wheel arches should be reserved for Toyotas. Especially as these sorts of fixtures are usually in place to provide a level of protection for the bodywork when out in the bush; we can’t see many UX owners planning a trip to Cape York along Telegraph Track any time soon. However, the black plastic does provide supplemental contrast at the least.

Many other areas do deserve high aesthetic merit, though. At the rear you’ve got to love the subtle red line that conjoins the taillights. And then at either end the taillights have little flicks, like fins on a 1960s American classic. The actual wheel arches behind the plastic cladding make the UX look quite active and flexed too, while the wedge-like side profile gives it a focused attitude. 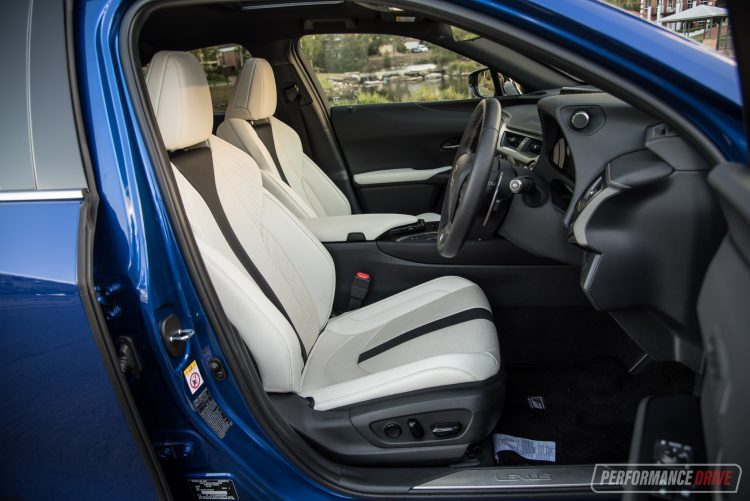 Turning to the interior, the big F Sport seats in the front are a clear highlight. You get the feeling Lexus hasn’t skimped in any area simply because the UX is an entry model. And the seats are prime evidence of that. These are just like the seats you get in an F Sport GS, for example. Fully electric adjustment with heating functions, and supportive yet not intrusive side bolsters make them some of the best seats in the class in our opinion.

The attention to detail is turned up to an even higher level for the dash and console. It’s a smart and sophisticated layout. Technology overload, maybe. But this is what Lexus is all about. It’s almost a show piece, a demonstration of Lexus’s talent and experience in building luxury cars. 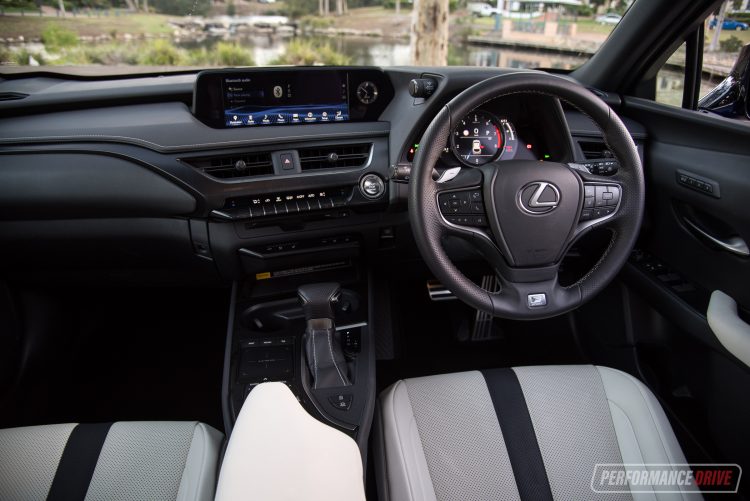 Unfortunately Lexus still hasn’t moved on from its remote touch pad thing that controls the media screen. We’re sure most will agree that it is very impressive as a piece of technology. It has that wow-factor you can show off to your friends. But in terms of functionality while you’re trying to drive, it’s just too involving and fiddly, and thus distracting. And it doesn’t seem to fit in with the UX’s current advertising campaign which goes on about ‘anticipating your every need’, suggesting it does things for you. The remote touch pad doesn’t really anticipate anything. It almost requires your full undivided attention.

Obviously you do start to get used to it but we think a more traditional hand controller system or even a touch-screen option would be nicer. We hear Lexus has just introduced touch-screen functionality for the latest RX. Perhaps this will trickle down to the UX in the near future. 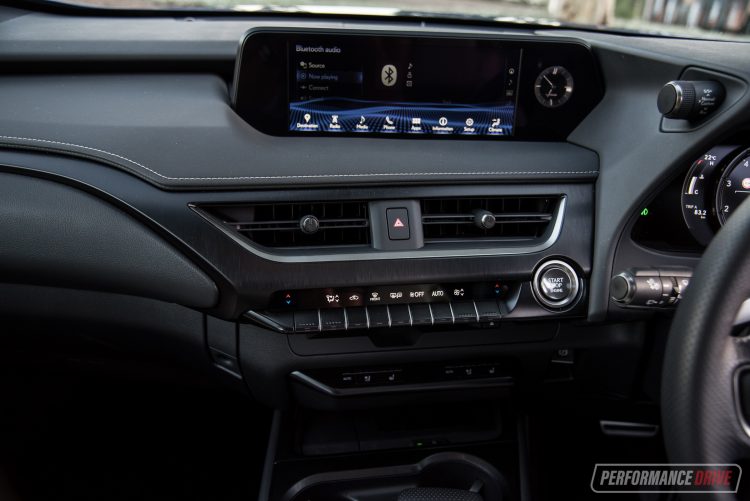 Aside from the pad operation, the screen itself is filled with apps and menus. It’s very comprehensive. The graphics are also pin-sharp and feature some cool colours and themes, fitting to the Lexus persona. There is an analogue clock nestled in next to the screen which seems like a great touch to authenticate the luxury car status.

The row of buttons for the climate control are beautifully smooth to depress, and we like the 12V socket that softly rises up from the somewhat cramped little section at the forward-most area of the centre console. There’s also a wireless phone charger tucked away in there. Even though it is a bit over-crowded around this area, the design is perfectly synced with the rest of the car. It’s almost like one single person designed every section of the car. We guess that’s what the YET philosophy is all about. 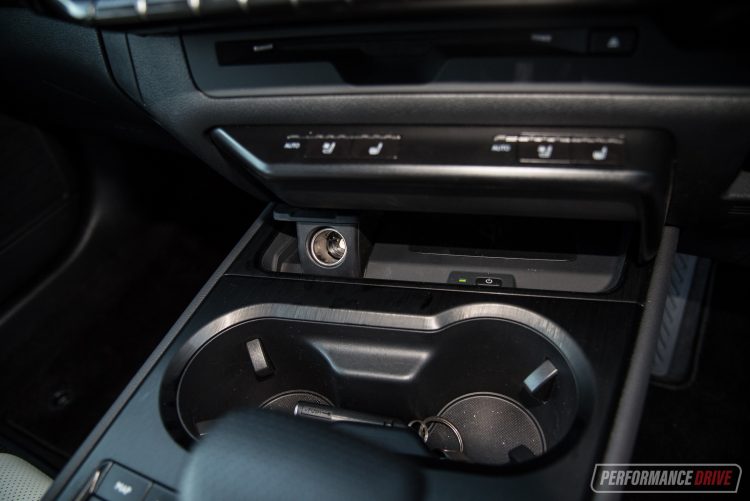 As for the comfort and space, the front seat passengers are well catered for. The seating position is perhaps more car-like than raised-up and SUV-like. And really large individuals might find it a little confined. But overall it is very comfortable and provides that secure and solid hug known from Lexus vehicles. 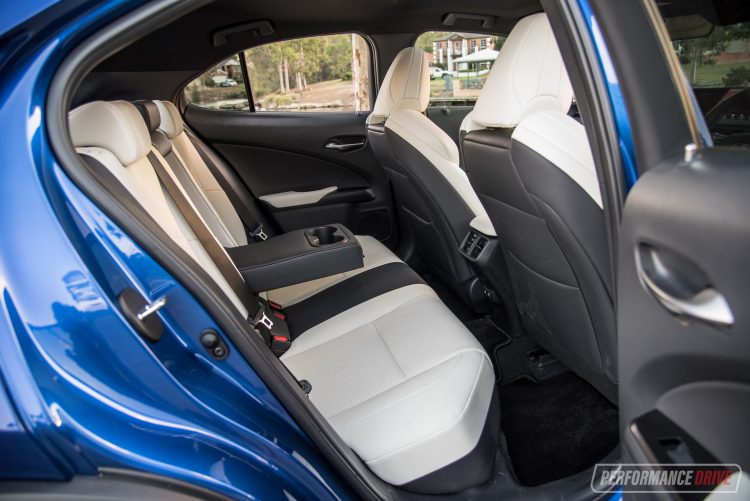 Rear passengers suffer as the sheer space just isn’t there like in some SUVs in this specific class. Again, for larger individuals it is going to be the biggest issue. For smaller types and even kids, it is acceptable. Legroom is restricted and headroom is just okay. Those in the back are presented climate vents and two USB charge ports, though.

Boot space is another issue. The stats say there is 371 litres to play with, but we can’t see it. The boot floor is too high, restricting its cargo-swallowing potential. In fact, we couldn’t fit in a collapsed pram, and we’re guessing a set of golf clubs would also be pushing it. There is some under-floor storage for smaller items, which does help. And there is a 12V socket back here – ideal for picnics and weekend escapes in the countryside. 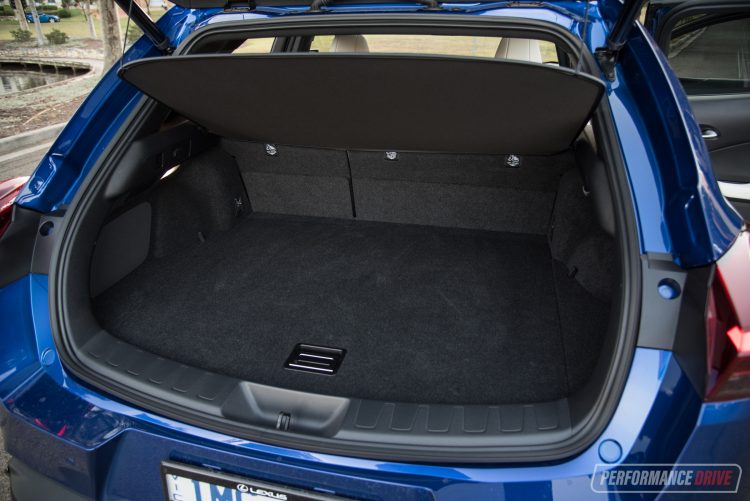 Powering the UX 200 is an ‘M20A-FKS’ 2.0-litre four-cylinder petrol engine. There aren’t any turbos or anything fancy added to it. But it does belong to Toyota’s all-new ‘Dynamic Force’ engine family (shared with the latest Corolla). This means it does feature some very advanced tech under the skin, such as both direct and port fuel injection (called D-4S), a high compression ratio of 13.0:1, and high-speed tumble-flow combustion initiatives. See video below for more:

The unit produces 126kW at a high 6600rpm, and 205Nm at 4800rpm. It’s obviously never going to provide the broad torque band of a turbocharged engine, but matched up to a clever CVT automatic it almost behaves like a turbo unit. Especially when it comes to gathering and maintaining speed under moderate throttle. Across the usual 0-100km/h sprint we timed a best of 10.16 seconds. This is slightly behind the 9.73-second time we found in the AWD 131kW 250h hybrid version, despite being around 150kg lighter than the 250h AWD. 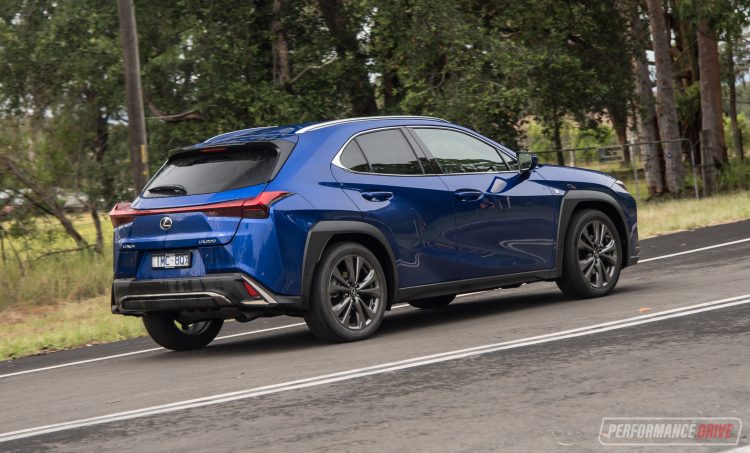 As a result of all of that high-tech engineering deep within the engine, fuel economy is outstanding. The official average consumption is stamped at 5.8L/100km, which is excellent for a non-hybrid and non-turbo unit. In the real-world we returned a week-long test average 6.8L/100km, and that included performance testing and hitting the mountains for handling tests.

Speaking of which, the Lexus UX handling is very accomplished. A lot of it has to do with the Toyota New Global Architecture platform that underpins the UX. Toyota has spent a lot of time and money developing the layout, and we think it’s a superb base for vehicles such as the new Corolla as well as the high-end stuff like the UX. 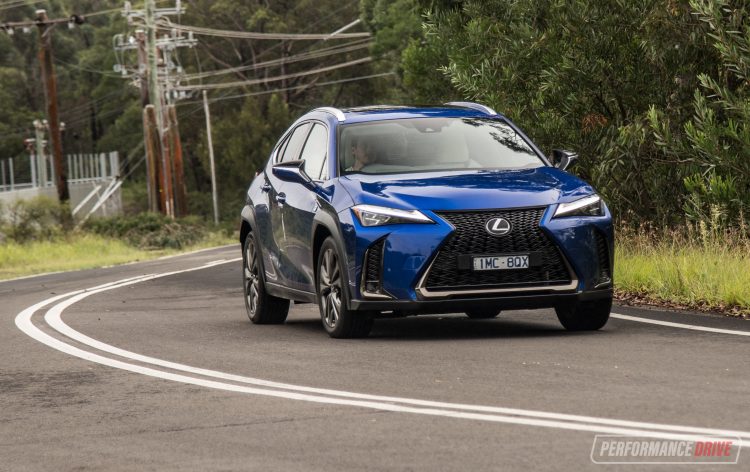 The turn-in is sharp and responsive, with good feedback coming through the accurate steering setup. There is a little bit of playfulness to it as well, and it doesn’t feel uncomfortable when you push it fairly hard into the bends. Grip levels are very high, even without AWD, and you can manipulate the tracking behaviour by shifting the weight abruptly or smoothly, respective to what you want to do. Obviously the UX isn’t pitched as a sports car but it is nice to see it can support an enjoyable drive in the mountains or along a favourite road.

Lastly, the ride is wonderful. Lexus ride quality is almost always at the benchmark of the industry. In the UX 200 F Sport you get adaptive variable dampers with different drive modes to choose from. And in all modes there’s a certain suppleness over poor roads that results in utter compliance and stability. Flick it into sport mode and it firms up for a braced and ready feel. Above all though, comfort is always at the top of priorities. Lexus has found an uncompromising balance between ride quality and sportiness, and it fits this vehicle like a hand in a glove.

What we love most about the UX is that it feels and looks like a proper Lexus, despite being the most affordable SUV in the company’s showroom. Some entry-level premium cars miss out on the full quality attention of the upper models. But not here. There is plenty of hard evidence that proves it is just as Lexus as any other model.

Things to consider? The rear seat area and the boot is on the small side for this class. However, those after a vehicle filled with exclusive technology, brimmed with industry-leading reliability, and all wrapped up in something that looks a bit different, the UX is worth a lot of your attention. Our recommendation is to go for the F Sport so you get the full versatility of sportiness with the adaptive suspension, as well as the fine luxury and attention to detail inside and out.

PROS:
– Excellent real-world fuel economy
– Superb F Sport front seats
– Fine luxury and attention to detail
– Perfect ride, adaptive dampers on F Sport
– Undoubtably going to be one of the most reliable SUVs in the class

CONS:
– Rear seat space is tight, even for this class
– Boot space
– Some fiddly or cramped in-car controls