Turning petrol into noise and energy is easy. Turning petrol into this much noise and this much energy is not so easy. Here, Jeep has not only created a 700hp road-legal vehicle, it has also packaged it with all the space and practicality of a family-friendly SUV. Welcome to the Jeep Grand Cherokee Trackhawk. Also known as the Grand Cherokee with the Hellcat engine, and, technically, the most powerful production SUV on the market. 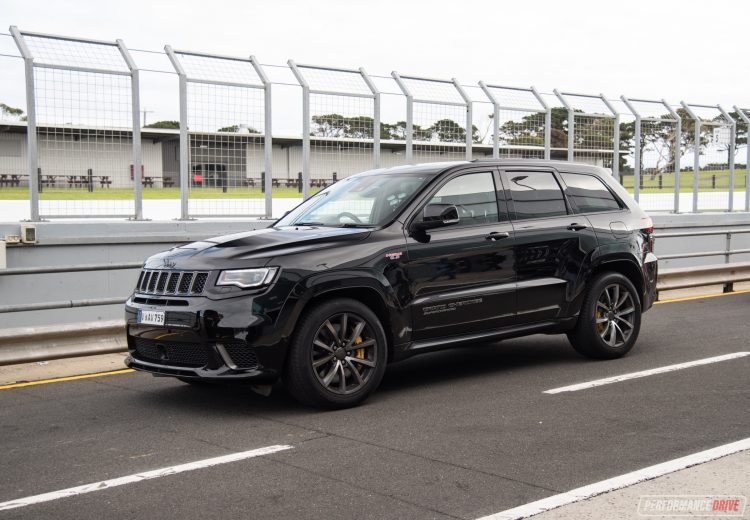 This is the only official way to gain access to the now famous ‘Hellcat’ engine in Australia. Overseas, the monstrous unit is available in the Dodge Charger and Challenger. But those are muscle cars primarily designed for speed, drag racing and burnouts. This is a completely approachable and rational SUV with proper rugged-terrain capability. As you might remember, the Grand Cherokee was once one of the most popular new SUVs in Australia, until the Mazda CX-5 came along. So for Jeep to introduce a 700hp version, it’s pure bonkers. The beancounters at FCA must have been having a good day to approve this one.

Prices start from $134,900. That might sound like a lot. But look at it this way, no current Porsche, Lamborghini or Ferrari can offer you this much power unless you’re prepared to part ways with at least triple the money. Tesla is actually the closest rival in terms of power, with the Model X P100D, offering an equivalent of 568kW. But even it is around double the price, and it’s hardly an SUV. 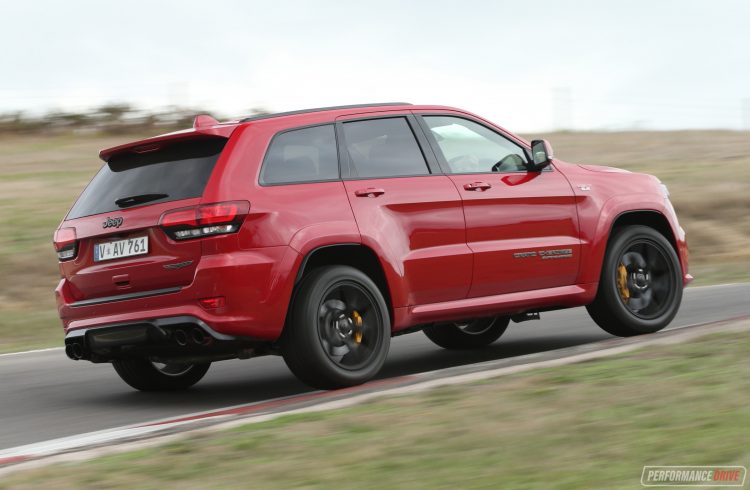 It’s amazing how understated this monster is. Yes, sure, it is a Grand Cherokee which already has somewhat of a gangsta tone to it. On the outside trainspotters will point out the 20-inch alloy wheels wrapped in 295/45 tyres. The tyres are bespoke too, specially developed by Pirelli to handle the beast’s weight and tarmac-ripping power and torque. Buyers can also option for unique forged alloy wheels measuring the same size yet featuring a cool dark coating.

The rest of the exterior is quite similar to the SRT version, except the lower front bumper bar, and front and rear spoilers are bespoke. Due to everything that goes on under the bonnet to produce all of that power, the Trackhawk’s front bumper bar has unique intakes in the lower front corners feeding air to an oil cooler and to the airbox for the intake. These replace the fog lights that usually sit in this position in the SRT model. Around at the back you’ll find the common-for-a-flagship quad-outlet exhausts, instead of the usual twin setup on the SRT.

So, what about that engine. It’s a 6.2-litre supercharged V8, also known as the Hellcat. Usually the engine thumps out 707hp (527kW) but due to the transition to Australian compliance the engine produces 522kW at 6000rpm, and a monstrous 868Nm at 4800rpm. On top of the engine you’ll find a 2380cc supercharger with charge-air coolers, with twin-screw rotors blowing in a maximum of 11.6psi of boost pressure. All of this is shoved down the neck of a 92mm throttle body, ready to explode with a compression ratio of 9.5:1. Yep, this is a serious unit.

Most of the components are beefed up, understandably, with thicker half shafts (2.2mm thicker) and driveshaft, a stronger eight-speed automatic that can handle up to 950Nm (instead of 700Nm in the SRT), and there’s a stronger diff that’s supported by four sturdy mounts rather than the usual three mounts. Jeep is very confident the setup can handle the power. It says it performed around 2000 launch control starts back-to-back during testing. Development vehicles also underwent 24 hours of constant hard laps around a circuit to try and uncover and iron out any wrinkles. 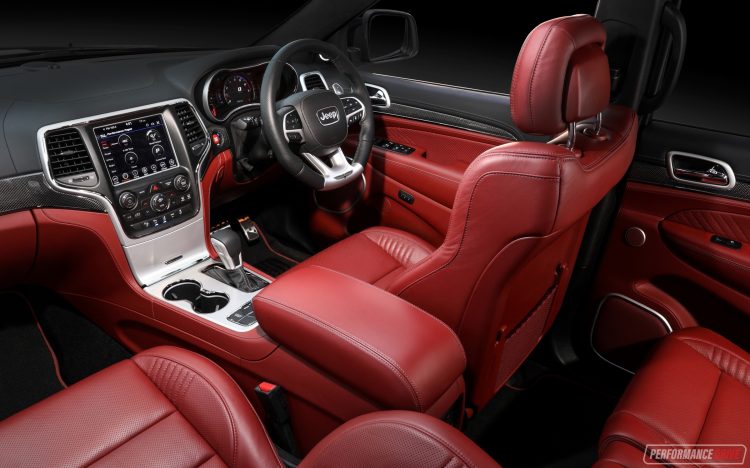 As you might have expected, the Trackhawk doesn’t come with a two-speed transfer case like some of the more sane variants. But it does come with Jeep’s latest Quadra-Trac on-demand all-wheel drive system with an electronic limited-slip rear differential. As for the torque split between the front and rear axle, it rather depends on what driving mode you’re in. In the standard Auto mode drive is split 40:60 front:rear, while in the towing mode this swaps to 60:40, and then 50:50 in Snow mode, and finally 30:70 in the Track mode (35:65 in Sport).

Sitting inside, the Grand Cheroke Trackhawk is completely civilised. Anyone can drive this vehicle. You don’t need to strap into a 50-point harness. And you don’t need to be as thin as a supermodel to fit into the seats. Instead, you’ll find big, comfy leather chairs with large but soft side bolstering for lateral support, a power-adjustable steering column, and even power-adjustable lumbar control. There’s also heaps of room inside for five passengers, with ample legroom and headroom in the front and back. It really is the ultimate family SUV for hardcore performance enthusiasts.

Up on the dash you’ve got Jeep’s fantastic Uconnect 8.4-inch touch-screen media interface. The portrait-style screen comes packed with everything you need, and a very cool ‘Performance Pages’ menu. You might want to set aside most of the afternoon to dig around in the Performance Pages. There’s heaps of cool stuff you can view, analyse and test. Everything from running the 0-100km/h, quarter mile, braking tests, to checking out how much lateral g-force you can pull around corners. This is exactly the kind of on-board computer a vehicle like this needs, as it allows the user to make an emotional connection with the vehicle via experiences. 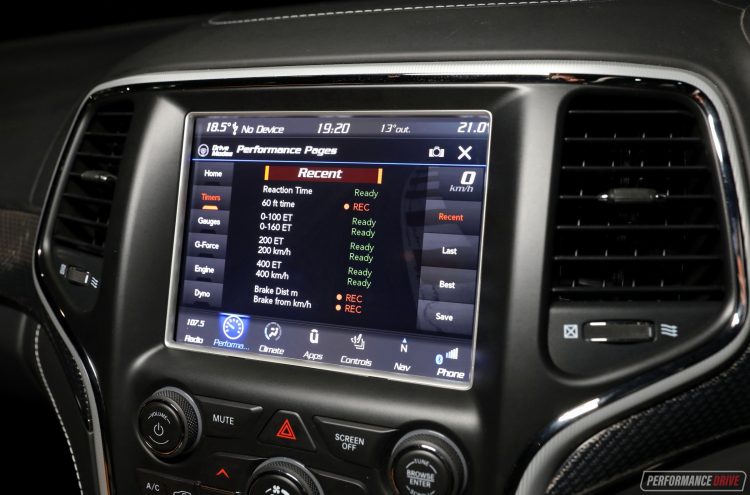 Like us, you’re probably wondering what it’s like to drive a vehicle that produces 700hp. Starting up the Hellcat engine is fairly dramatic. There’s a crackly and disgruntled snort as it bursts into life, before settling down to a deep rumble at idle. It is very obviously powered by a V8, but it’s not as crazy-sounding as you might expect. The regular SRT version sounds pretty similar actually, only here there is more crackling and commotion involved.

Into Drive using the updated gear shifter, and you’re on your way. If you could close your ears you’d think it was just a responsive V8 Grand Cherokee. In other words, anyone can drive this vehicle, as we said. It’s not intimidating, unless you constantly dwell on that 700hp figure. It’s not until you start to lean on the accelerator pedal do things change. This beast is super-responsive. It actually reminds us of the top Tesla models in the way it relentlessly charges forward in exact correlation to pedal movement. Push it a little bit and it leaps forward a little bit. Push it some more and it just keeps hauling, squatting down at the rear with the nose pointing high and proud.

What about just flat-out nailing the throttle off the mark? Well, be sure to tense your stomach muscles if you’re a passenger, as this machine will easily overwhelm your senses and internal mechanisms for dealing with gravity. There’s some wheelspin from all four wheels as it momentarily scrambles for traction, while at the same time it claws at the ground, flinging the 2.4-tonne SUV forward with unbelievable momentum. First gear is over quicker than you can respond with the paddle shifters – leaving it in D is the best way – with 0-100km/h coming up in a timed 3.81 seconds, according to our Vbox. Jeep claims 3.7 seconds, and the in-car timer, which runs on the speedo and not actual vehicle speed, stops in as little as 3.5 seconds. 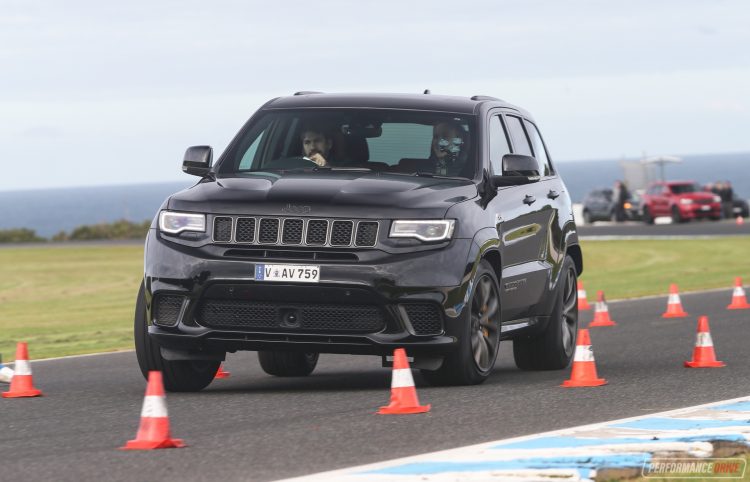 Despite being a very heavy beast, the Trackhawk is surprisingly agile. We had only a brief chance to test the handling on the prestigious Phillip Island Grand Prix circuit in Victoria, but as part of the drive program the Jeep team set up a moose test with witch’s hats. Apparently, they configured the hats to the official standards of the European moose test. It’s a pretty tight exercise, requiring very sudden and snappy steering inputs one way, and then quickly back the other way. Usually, the test is ran at around 65km/h. However, the instructor told us to gun it through at around 75km/h. The best speed on the day was apparently 83km/h, without knocking over any hats.

Around the circuit the big Jeep doesn’t feel out of its depth. Underneath the skin you’ll find a comprehensive sports suspension setup with Bilstein dampers and adaptive modes, while the electronic rack and pinion steering has been specially tuned by SRT like in the regular SRT model. Ground clearance, approach and departure angles are the same as the SRT, at 218mm, 18 degrees and 22 degrees, respectively. And to ensure the massive machine can pull up at the end of all that forward thrust, the Trackhawk gets uprated brakes compared with the SRT. The discs use directional slots and measure 400m in diameter on the front and 350mm on the back, clamped by six-piston front and four-piston rear Brembo calipers. 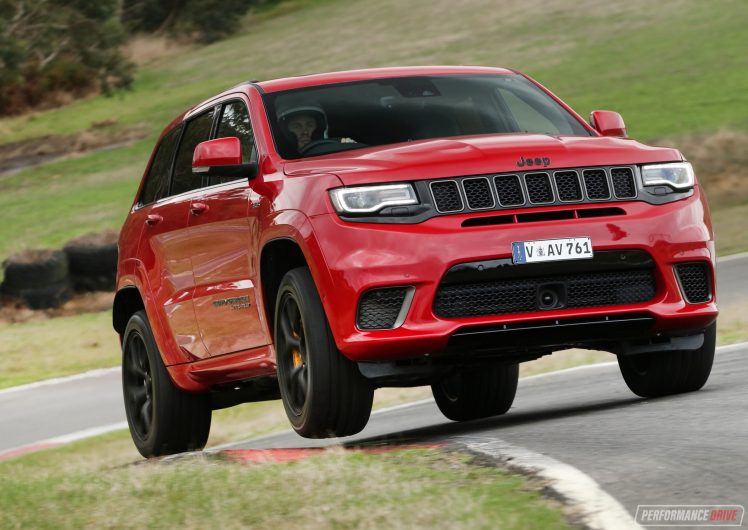 Back to the handling though. You might think it’s a bit of a handful to drive in a sporty manner. But, to our (and we’re sure, your) surprise, it turns quite precisely, with good body composure and hardly any roll, and the steering is progressive and light in weight. There are a few turns lock-to-lock, as you’d expect from a big SUV, but that makes it more comfortable when you’re not just doing moose tests.

Okay, so the fuel consumption is rather high compared with a city hatchback. However, if we take a quick look at our efficiency-to-power ratio (power divided by official average consumption), you’ll see a figure of 31.07:L/100km. Anything above 25 is usually pretty good and a sign of decent efficiency for the power you’re getting. In other words, this Jeep does consume a lot of petrol but it is producing a lot of energy from each drop.

The whole concept of this kind of vehicle shouldn’t really exist in today’s go-green-or-go-home world, which makes this all the more exciting. It’s definitely the bad boy of the new car market. And for that reason alone we absolutely adore it. Aside from the wow-factor though, the Trackhawk is surprisingly civilised and practical, and the great handling and composure makes it feel safe behind the wheel, even with all of that power.

Jeep says around 7-8 per cent of all Grand Cherokee sales in Australia are made up of the SRT model. Given Australia’s love affair with any performance iteration of pretty much any vehicle, we think the Trackhawk will sell with no problem at all here. So far the local arm has sold 62 examples in the initial production run, but interested buyers can still place an order now. If we had a spare $135k to spend, it’d definitely be in our garage. What a machine.

PROS:
– Truly mind-blowing acceleration and power
– Surprisingly agile on the track; does well to mask some of that 2399kg weight
– Crackling and bellowing V8 soundtrack
– Huge bang for your buck; no other vehicle comes close for price:power ratio
– No loss in practicality or drivability
– Uconnect media interface with Performance Pages

CONS:
– Bonkers performance will frighten some buyers
– Based on aged platform 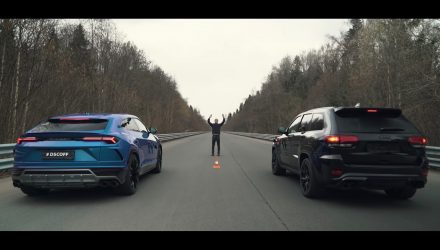 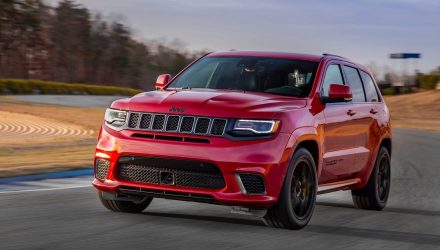 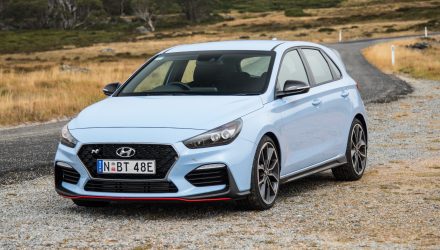 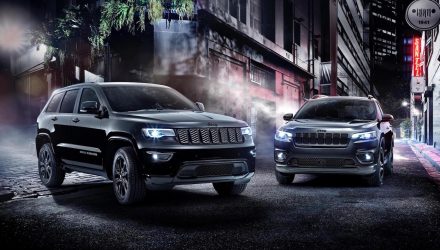 PerformanceDrive is a leading auto website and YouTube channel in Australia, with a special interest in performance testing of new vehicles.