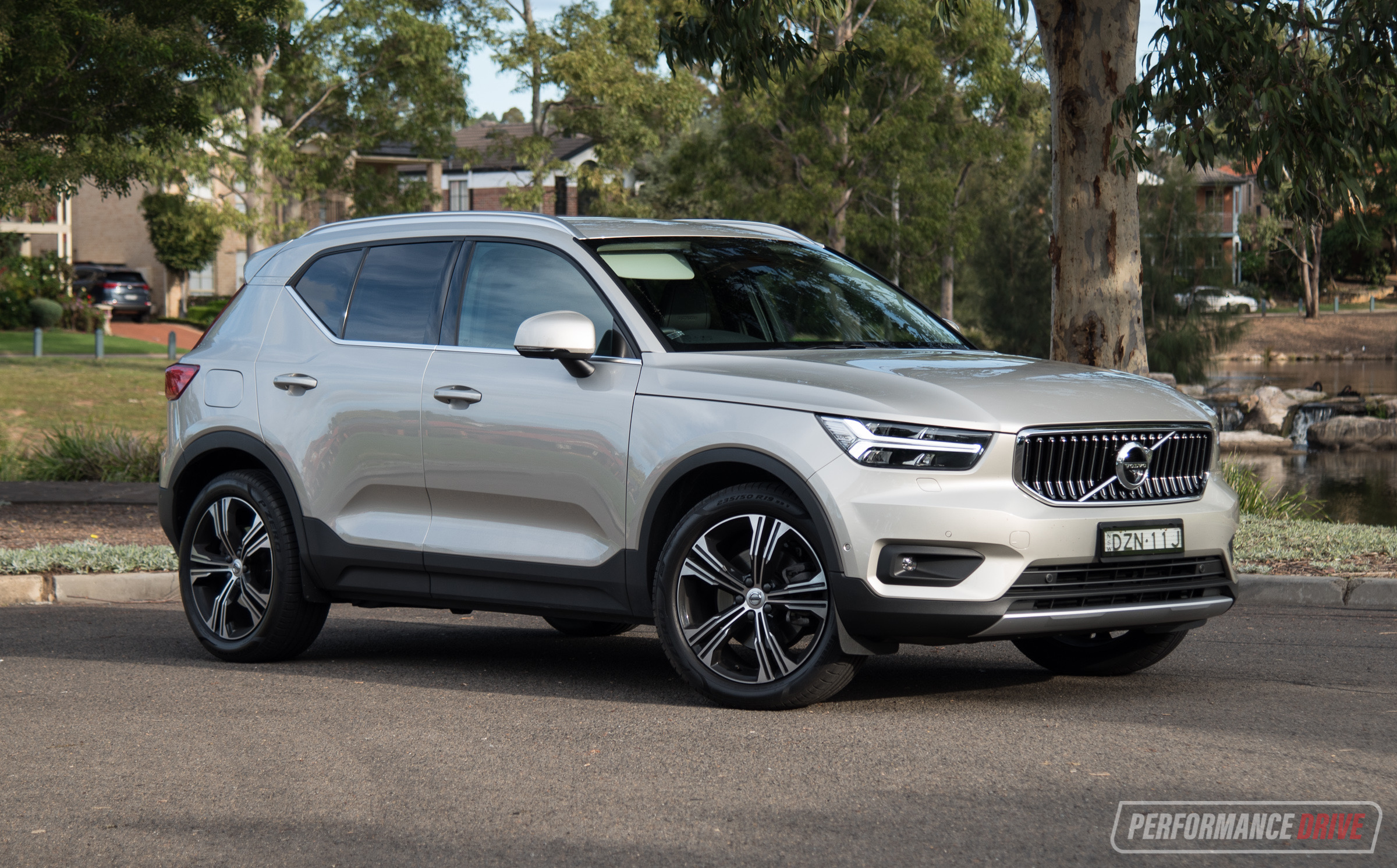 Since hitting Australian shores in mid-2018, the Volvo XC40 has been making head waves. The new small SUV from the suave Swedish company has lifted the bar in this segment. Volvo has been struggling to keep up with demand Down Under. 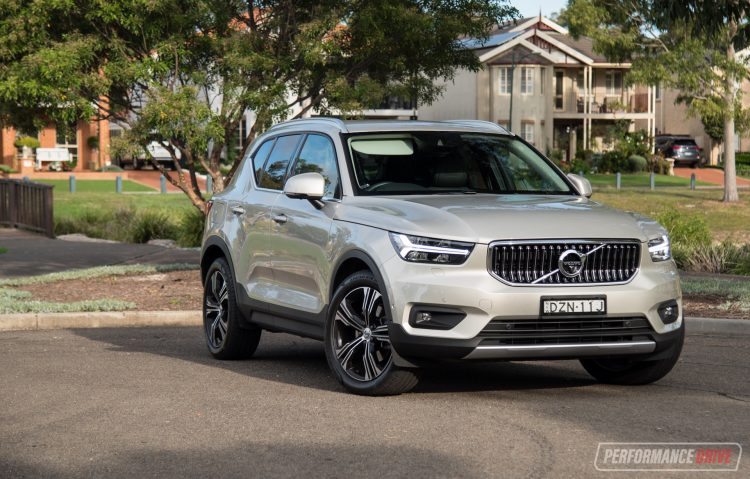 According to VFACTS figures, in 2019 to the month of April, the XC40 is the highest-selling small SUV in the above $40k category, with a 19 per cent share of the market. That’s right. It is outselling the Audi Q2, Q3, BMW X1, X2, Jaguar E-Pace, Lexus UX, Mercedes GLA Class, and the MINI Countryman. It has also scooped up many accolades along the way; including 2019 Wheels Car of the Year, 2018 Carsales Car of the Year, and the 2018 European Car of the Year.

So why is the XC40 a raving success? We test drove the top spec T5 R-Design Launch Edition here, but we’re also just as interested to see how the mid-spec T4 Inscription holds up, given only the base model Momentum and top-spec R-Design were offered on initial release. 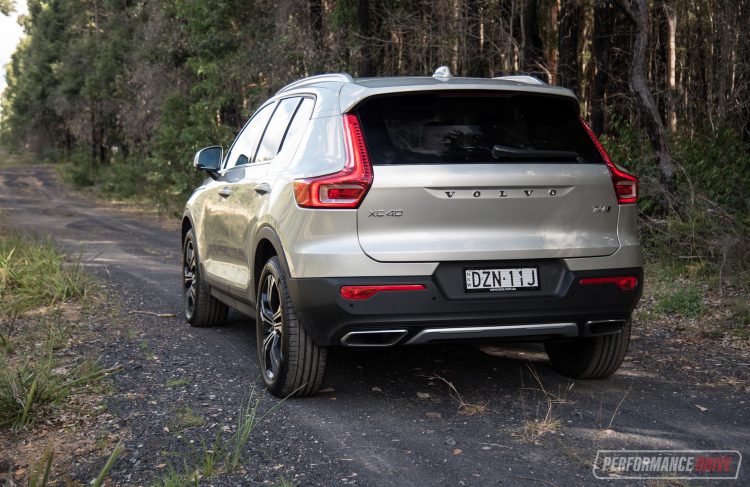 Sadly, Volvo has since dumped the diesel engine option in place of a lower output petrol engine. The two engines offered in Australia are both ‘B42’-based 2.0-litre, four-cylinder turbo-petrol units named the T4 and T5. They produce 140kW and 300Nm, and a racy 185kW and 350Nm, respectively. 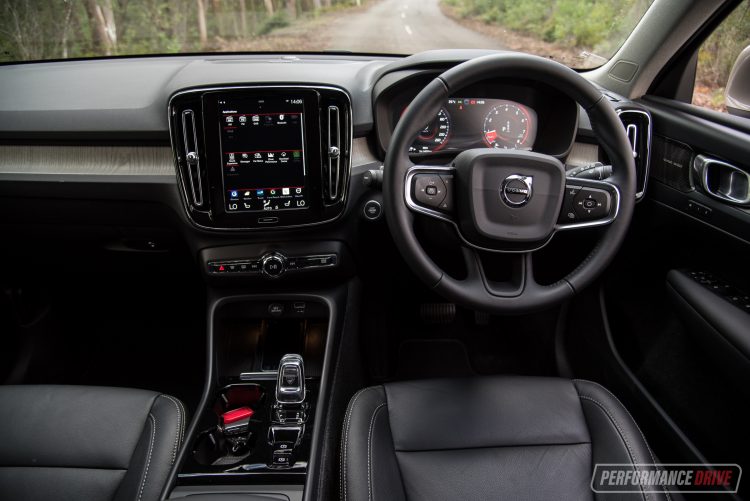 Since we first laid eyes on the XC40, we fell in love with its modern take on Scandinavian design and practicality. And it is still just as fresh and class-shattering nearly one year later. You can also opt for some fun colour combinations with contrasting-coloured roofs if you want to exhibit that contemporary look. We especially love the large black grille combined with those ‘Hammer of Thor’ headlights to convey a robust stance. Yet, the dimpled doors make the XC40 look agile and athletic. The best thing about it is, the design does not at all impede on its practicality.

The XC40 is amazingly spacious and airy for a small SUV. Using Volvo’s new CMA (Compact Modular Architecture) platform, it allows for more cabin space for all passengers. The front and rear passengers have ample amounts of legroom to be comfortable on long getaways; and while enjoying an interior that is one of the trendiest on the market today. The seats are typically as comfortable and supportive as we’ve come to know from Volvo, with the front seats having numerous settings to adjust to all body shapes. 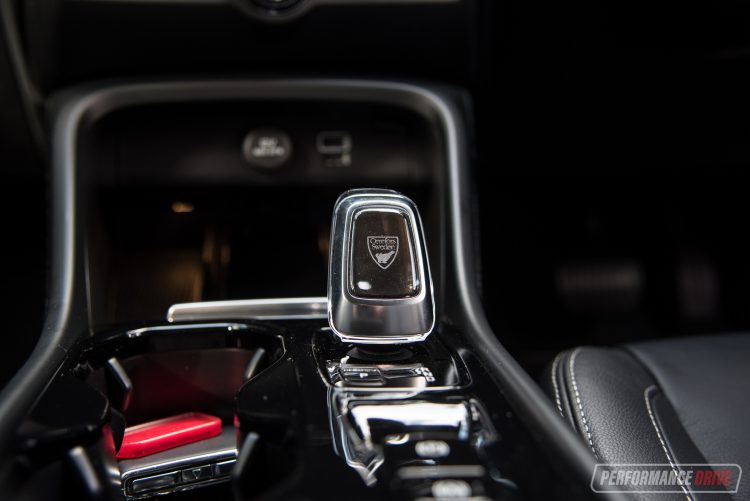 All surfaces are clean and non-intrusive to your space. Materials feel high in quality, and some are even made from recycled materials – for example, the door pocket lining. All Inscription models come standard with beautiful light grey driftwood inserts on the doors and a crystal gear lever. A standout for us is the degree of clarity from the crisp and neat 9.0-inch vertical touch-screen and digital instrument cluster. Less is best, and in this case, easy to grasp.

You can tell the difference in the XC40s high build quality compared to others on the market. From the notably smooth door latching, to the feel of the interior buttons, to the headlights being the brightest we’ve seen. The optional adaptive cruise control and auto high beam are also some of the most accurate on the market. But with Volvo being designed with the utmost safety in mind, the cruise control minimum distance setting is too far away from the car in front compared to other systems we find. 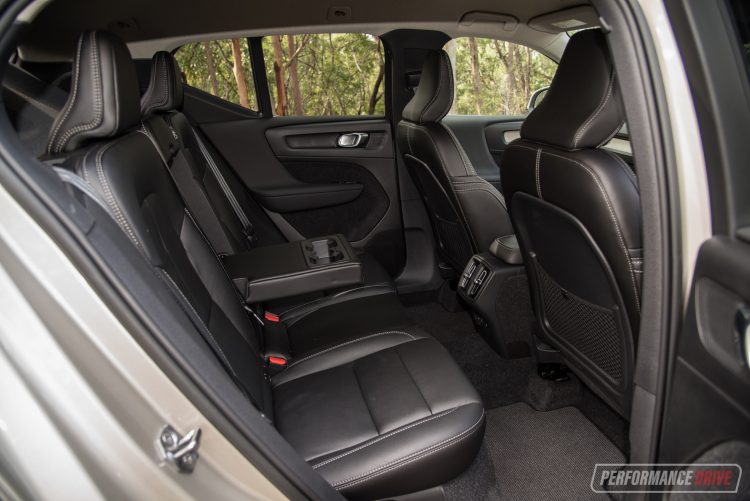 We can’t stop raving about the amount of handy storage solutions in the Volves. You get what must be the world’s biggest door pockets, a wireless charging pad, a handy removable bin in the centre console, and heaps of crevices to store items. The boot is of a generous size for a small SUV too. It measures up at 460 litres, or 1336 litres with the rear seats folded down. Even the rear seats can be tremendously easy to collapse, when you opt for the electronic system which is mounted on the boot wall. The boot space is also more usable than some in the competition. With a wide opening and a foldable floor that reveals strong hooks for bags to hang onto, it’s just another way the XC40 is one practical masterpiece. 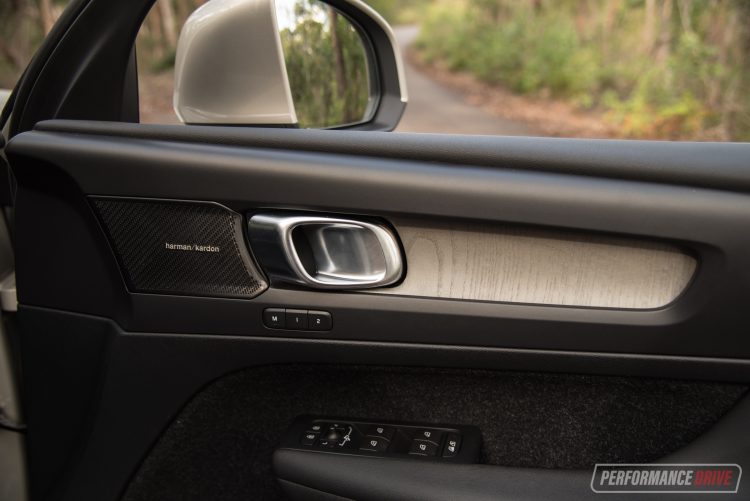 We’ve said it before and we’ll say it again, Volvo Australia doesn’t have the greatest distribution and after-sales service. Many Australian drivers won’t find a Volvo dealership near them that reside outside the capital cities. For example, there are no dealerships outside Melbourne in Victoria, and only two exist outside Sydney in New South Wales. 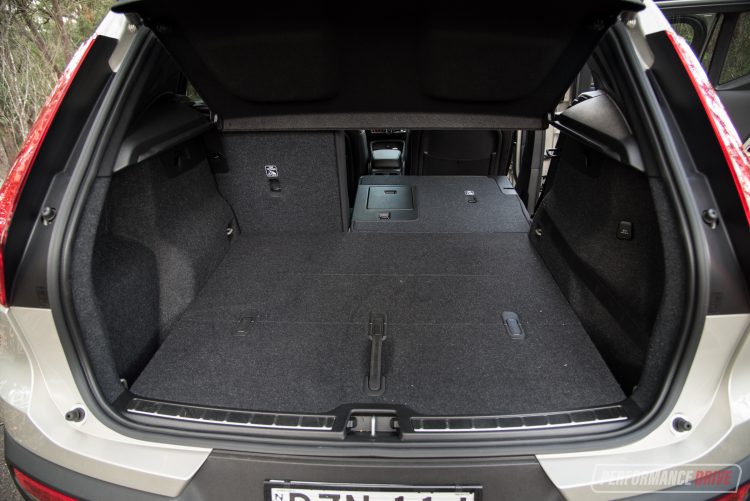 Sadly, diesel is no longer an offering in the XC40 range for Australia. But watch this space as Volvo will launch new engine options in the near future. The T4 petrol we’re testing here is still a comparable performer if you like to get your world moving quickly but also enjoy good fuel economy. It feels like it has more than 140kW and 300Nm.

On the road, we found there is still enough oomph to comfortably keep abreast of city traffic, and enough torque to climb steep hills with a full load. At least the punchy T5 engine is an option for those who want more. But most drivers would be happy with the T4 anyway. Official figures rate 0-100km/h acceleration at a fair 8.5 seconds. Our testing revealed a best of 9.14 seconds with this example. 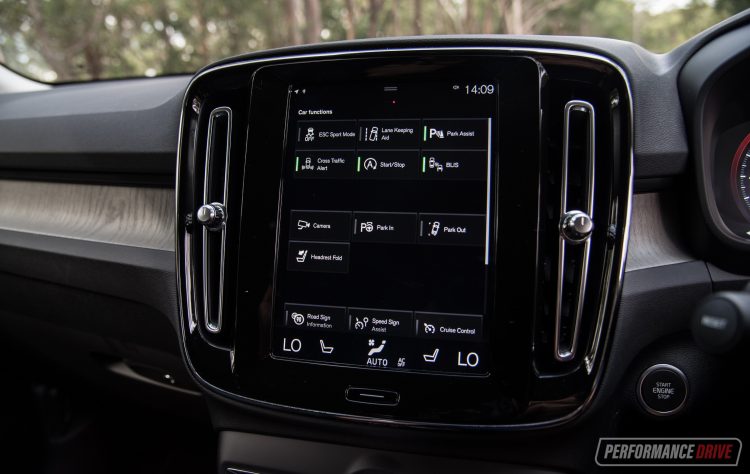 Although it can seem that eight gear ratios are a tad confusing and delayed for the car’s computer to work with, it is a great contributor to keeping the engine revs low. Especially since the full torque kicks in at just 1400rpm. In fact the peak power is achieved at just 4700rpm. Operating the gears also takes a bit of getting used to as you need to double tap the (crystal) gear selector to shift from drive to reverse, and vice-versa. Surely there’s a way to eliminate the need for this?

In the way of driving dynamics, the XC40 is very stable and refined over bumps. It undertakes corners with minimal body roll and an appropriate amount of feedback is returned to the driver. Steering is slightly lighter than most, which is helpful in tight carparks. Noise, vibration and harshness levels are as low as the best in its class. The turbo spooling up is quite loud compared to other turbos, but there are worse things to listen to. 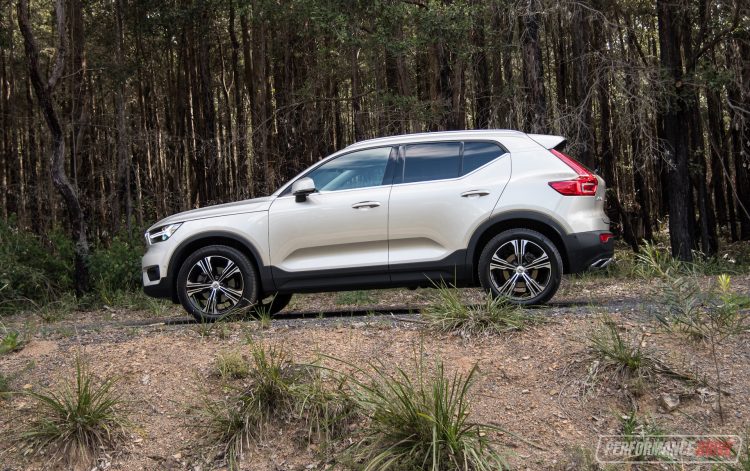 All T4 Inscription models are all-wheel-driven and come with an off-road mode. Which is great if you actually intend on undertaking light bush duties. It will happily take on the off-road with confidence, but you wouldn’t treat this like a LandCruiser or Suzuki Jimny off the bitumen, and certainly shouldn’t expect to achieve the same results.

At the bowser, the XC40 T4 costs among the average for a 2.0L all-wheel drive. Fuel consumption officially rates at 7.4L/100km running on the minimum 95RON requirement. Our average reading was 8.2L/100km, which was made up of mixed highway and city driving.

Switching to economy mode will help to bring these figures down thanks to a coasting function and more relaxed throttle sensitivity. This former function means that when acceleration is not being applied, the gearbox will engage neutral and sees the engine drop to idle. It’s all seamless and smart. Unfortunately, the XC40 is fitted with a small fuel tank. So at 54L you’ll struggle to travel 550km before needing to refuel. 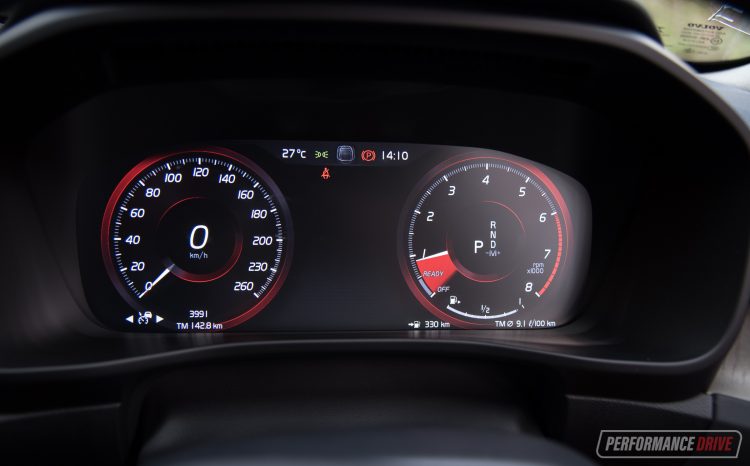 If you haven’t noticed, we have fallen in love with the Volvo XC40. And the mid-spec T4 Inscription is just as well-presented, practical, and feature-packed as the rest. And the plethora of accolades reflect the same tune. If it weren’t for Volvo not being a very accessible brand in terms of showrooms, service and availability, you would probably see a lot more XC40s on the road we think.

PROS:
– One of the most stylish exterior designs in the class
– Contemporary, airy and uncluttered interior design
– Cabin and boot space
– Crisp and clean touch-screen interface
– Exceptional Harman Kardon sound system (optional)
– Quiet and refined on the freeway
– Earned many awards