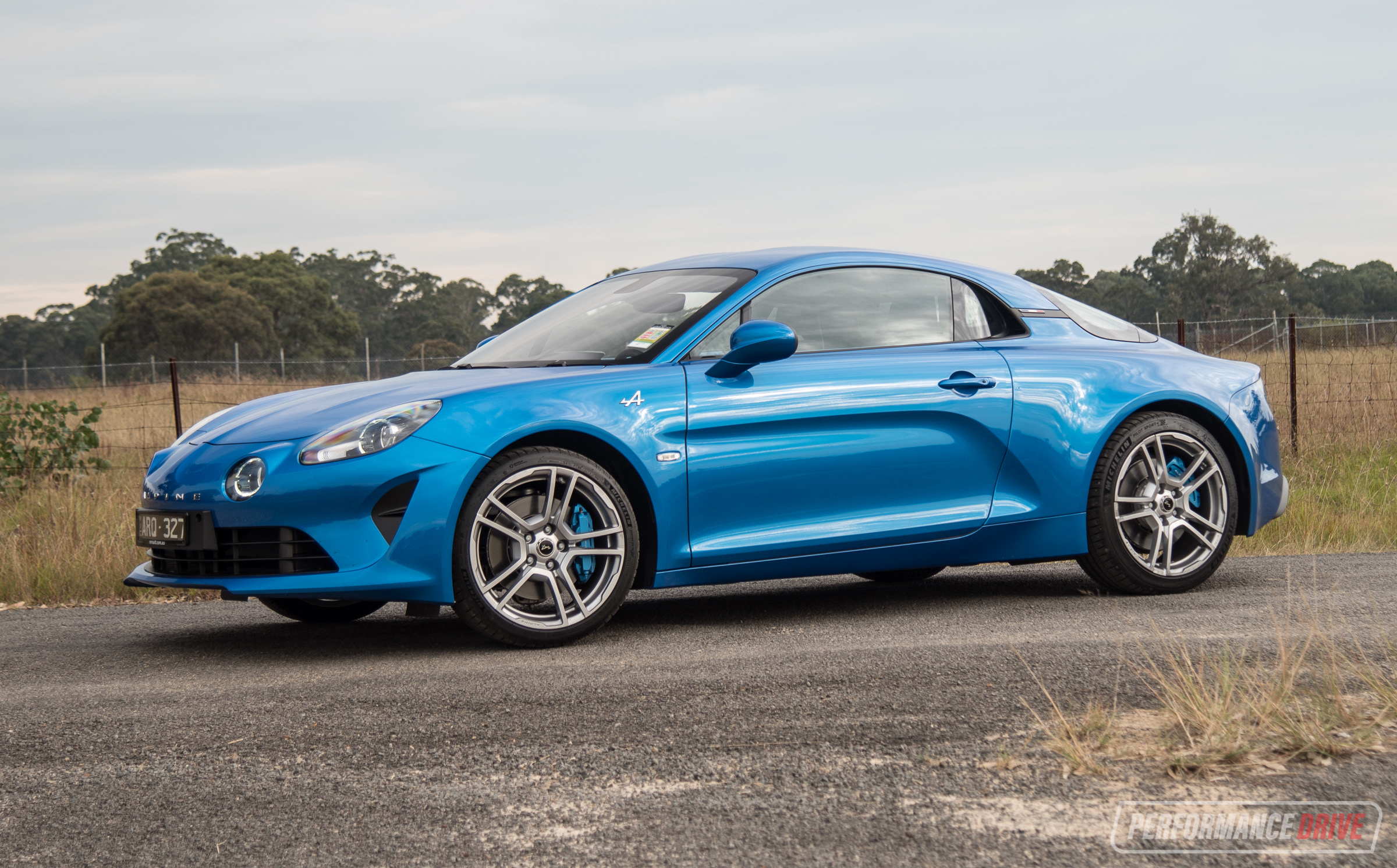 Every now and then a carmaker will introduce a properly special car. A car that will undoubtedly become a future classic. In terms of modern stuff, we’re talking about cars like the Jaguar F-Type, the Toyota 86/Subaru BRZ, and even the Alfa Romeo Giulia QV. The new Alpine A110 has huge potential to join this very exclusive club. 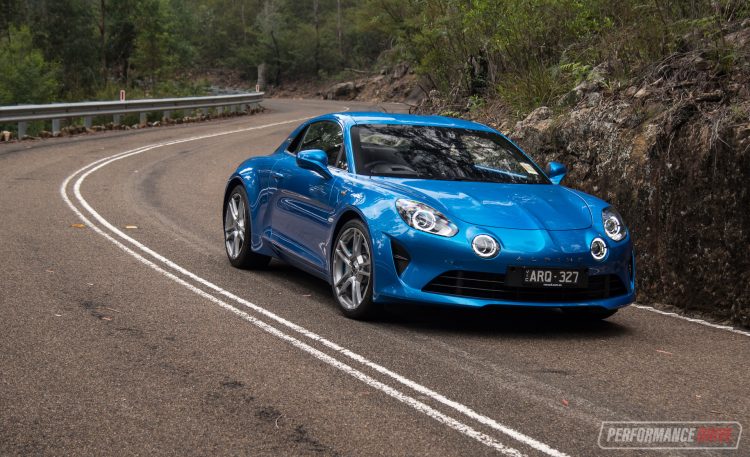 Who is Alpine? It’s a French car company that’s been around since 1955. It used to build racing cars based on existing French cars, and dabbled in production sports cars. One of its most iconic vehicles was the A110 Berlinetta. This was a sleek, low-slung two-door sports coupe, with rally versions so successful they won the 1973 World Rally Championship. And this was back when Porsche and Lancia were heavily involved in the sport.

It was in that year that Renault saw value in the company and the brand, so it bought it. Fast forward to today and Renault still owns Alpine. With Renault’s help the company reintroduced the A110 last year, albeit as a modern interpretation. Unfortunately, there is no A110 WRC version competing. But that’s probably just wishful thinking.

Three different variants of the new A110 are on sale in Australia, spanning from the Pure, the Legende, to the limited edition Premiere. Just 60 of the latter are up for grabs in Australia (1955 units globally), and probably all already spoken for. We’re lucky enough to sample one such example here. Prices range from $97,000, $103,500, to $106,500, respectively (excluding on-roads). 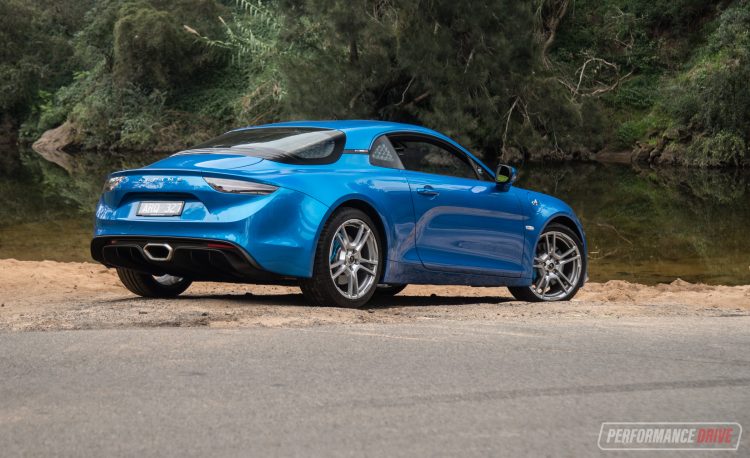 Despite being owned by Renault, Alpine pretty much went its own way with the new A110. It’s not based on any existing vehicle, and in fact it uses a bespoke platform and body constructed mostly from aluminium. So this means it is very, very light. As it stands this Premiere version is stamped with a tare weight of just 1060kg. This makes it one of the lightest weight coupes on the market today.

Taking a look inside and you’ll soon see this really is a completely unique vehicle. There’s nothing in here that looks similar to any existing Renault. It is a strict two-seat cabin with only minimal luxuries and creature comforts, with most controls and in-car functions centred around the driver. 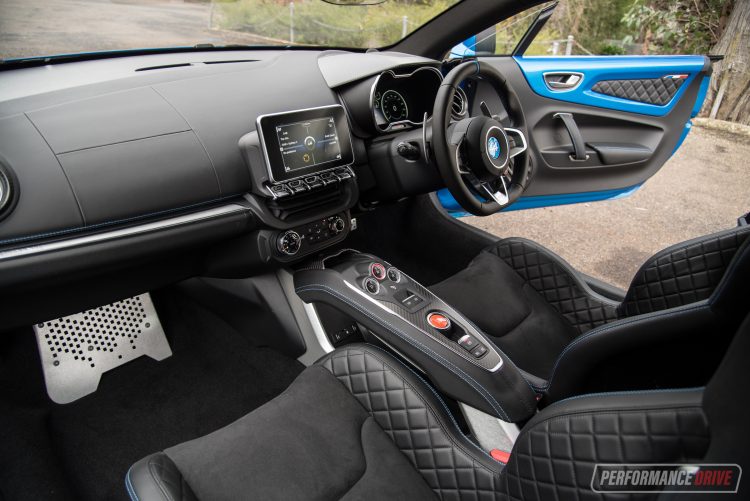 It doesn’t matter if you missed out on the 60 Premiere Editions. All A110s come similarly equipped. The main difference for the interior is a set of rigid Sabelt bucket seats that offer no recline adjustment, and some carbon fibre trimmings for the dash on the Premiere. We’re sure there will be a few buyers out there that would prefer to have adjustable seats anyway.

In saying that, the Sabelt seats are surprisingly comfortable, even on longer journeys. Some how there is enough cushioning to  absorb bumps and vibrations, and they feel perfectly contoured to the shape of the human body. Well, that’s in reference to this 170cm average-build driver. Larger individuals could feel a bit cramped due to the sheer depth of the buckets.

Running through the centre of the cabin is a kind of arch console. On the top you’ll find the gear selector buttons (yep, buttons, like an electric car), and a little slot for the awkward Renault key card or your phone, the start button, and that’s about it. You can use the rest of the arch as an armrest. 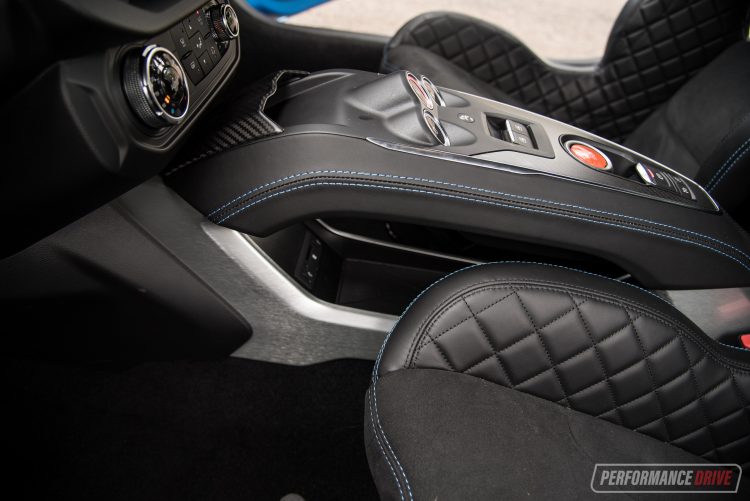 Underneath it there is a handy storage tray. However, it can be difficult to reach as the bucket seats extend up and essentially conceal the access. Other than that there isn’t much else in the form of storage space. There’s no glove box and only a little bit of room behind the seats.

The point of the A110 isn’t to be a practical grand tourer. This is a dedicated driver’s car. But if you are planning to use it for the odd weekend getaway there is a 96L boot under the bonnet, and another 100 litres available in the boot behind the engine. 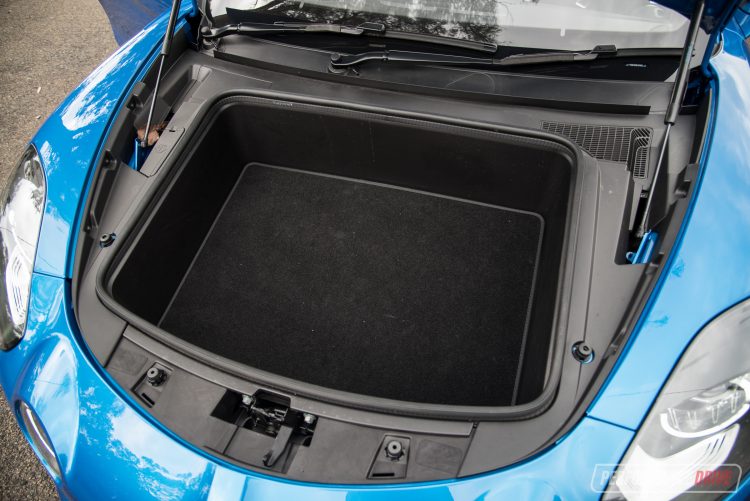 All fixtures and fittings seem well made, with minimal rattles and creaks to report. There is decent cabin insulation to reduce road noise and wind noise too. There’s also a comprehensive touch-screen media interface packaged with sat-nav, Bluetooth, and some cool Alpine telemetry displays; turbo boost gauge, acceleration timers and g-force gauges. In that sense, it isn’t a completely compromising sports car. You could use it every day or for long drives. Speaking of driving, let’s go and do that. 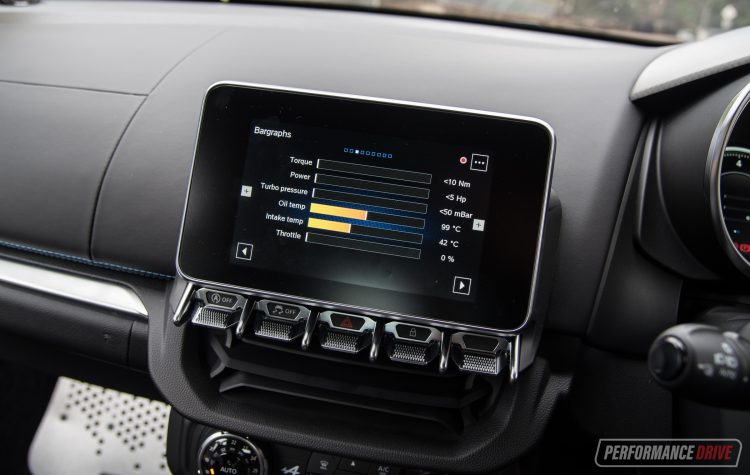 The A110 adopts a mid-engine layout, like a supercar, with a dual-clutch auto transmission and rear-wheel drive. It takes a while to access the engine as it is buried behind the cabin and in front of the boot. We didn’t bother with it but it appears you have to remove a few covers and so on to get to it. What’s important is the engine itself. 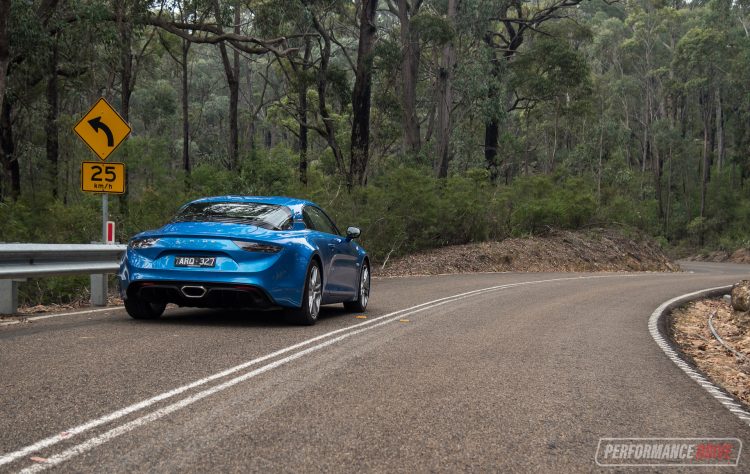 Yes, power is reduced compared with the hot hatch. But remember this little beast weighs only 1060kg. As a result, the power-to-weight ratio is insane, and the acceleration is equally absurd. We clocked a best 0-100km/h in just 4.82 seconds. The car comes with launch control, but unlike most cars with a dual-clutch auto, you can actually build the engine revs on the brake pedal with the traction control off. Doing this will provide launch-control-like functionality, without traction control intervention. Point being, we tried a bunch of tests to try and find the best time, and had a ball doing it.

You aren’t left wanting more acceleration, put it that way. The engine roars and barks its way to the redline in no time, giving off that fashionable fart and pop during upshifts. There is a track mode which opens up the exhaust, but we think it could actually be a bit louder. If you take a listen in our video below you can hear there is some muffled whoosh sound coming through the tailpipe. Maybe a louder and freer-flowing system is being reserved for the rumoured ‘S’ version?

Using the paddle shifters in manual mode, nothing in automotive life gets much better than this. You just want to keep driving and keep flipping those paddles. Up gears, down a few gears, and back up through the gears. You might as well start mapping out your favourite driving route now because this is one of those cars that you just want to drive and drive. 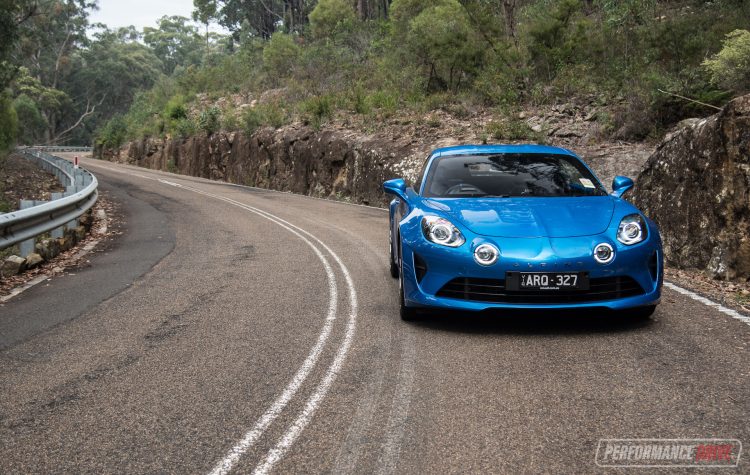 When it comes to turning, boy does this thing tackle corners. Especially on regular mountain roads. There is just the right amount of suspension compression to soak up bumps and dips, without upsetting the tracking. This allows you to pinpoint exactly where you want the car and not have to make allowances for road imperfections.

The suspension is taut enough to provide very high cornering grip and resultant g-force. The centre of gravity is so low that it doesn’t seem to need an ultra-firm spring setting. Alpine has definitely struck the ultimate balance here with the suspension, in our opinion anyway. On immaculate circuits some might request a tighter setup. But on normal roads and club circuits and that sort of thing, this is excellent. 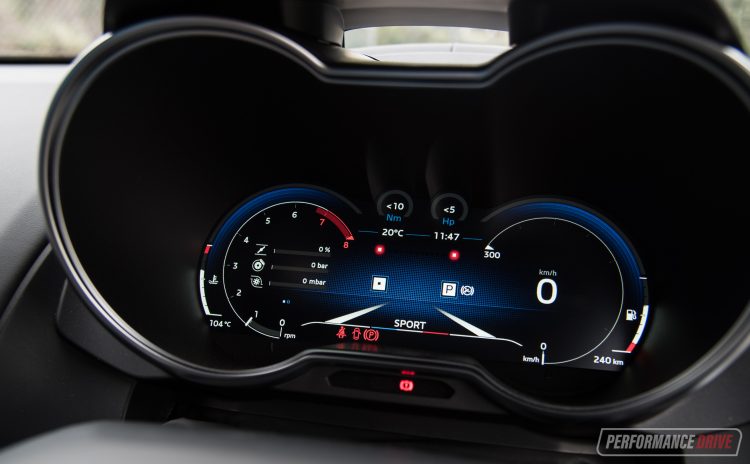 The steering is ideally-weighted and provides plenty of feedback. Using that somewhat cushy suspension to your advantage you can easily throw the weight around and really hinge the car from the front, middle, or rear if you want to. Oversteer is totally possible using momentum, but being mid-engined, with the weight of the engine constantly over the rear tyres, you can’t really use sheer power to kick the tail out. That’s a good thing though as it will suit a wider range of drivers and skill levels.

Being so light in weight means it doesn’t need crazy stoppers. But going for the Premiere edition does earn you some Brembo items. They don’t overheat, fade or step out of place at all. We literally tried to find weakness by punishing them with repeated runs up and down our test route. And nothing. The brakes felt pretty much the same the entire time. Okay, so maybe we didn’t repeatedly test them purely to find weakness. There was also a fair bit of fun involved simply running up and down. But, you know, better we do thorough testing to make sure.

What a brilliant little car this is. We can’t really find any fault. The driving experience is pure bliss. This is a car you could spend hours and hours just driving up and down your favourite road or around a track. It is exciting, extremely capable, and it puts a smile on your face. And with an official average fuel consumption of just 6.2L/100km (we averaged 8.5L/100km), you needn’t feel guilty about spending a few bucks on brimming the tank and going for another drive.

As we suggested at the start, this is a truly special car and it will no doubt be a classic in the future. If you’re thinking of buying one, do it. You have our complete recommendation.

CONS:
– Touch-screen menus are a bit cumbersome, require too many selections for simple tasks
– Not much storage or boot space