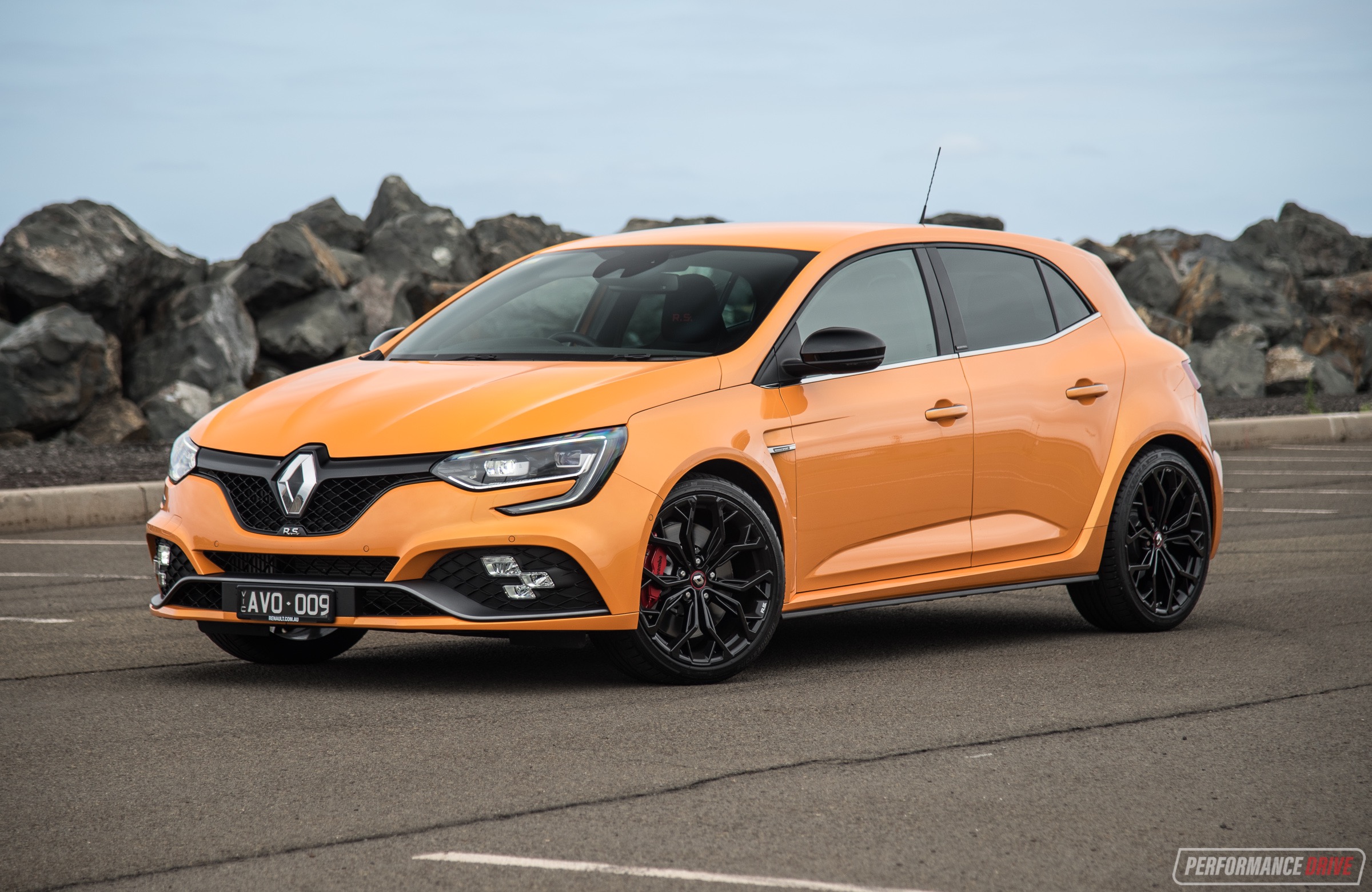 When it comes to properly hardcore hot hatches, Renault is one of the few car manufacturers that knows how to do it properly. This is because the French brand has been doing it for decades, and could even be regarded as the pioneer of this vehicle style. The 2019 Renault Megane RS comes at a very critical time, what with the likes of the new Honda Civic Type R setting numerous lap records, and even the Hyundai i30 N blowing most of the competition out of the water in terms of sheer playfulness and practicality. 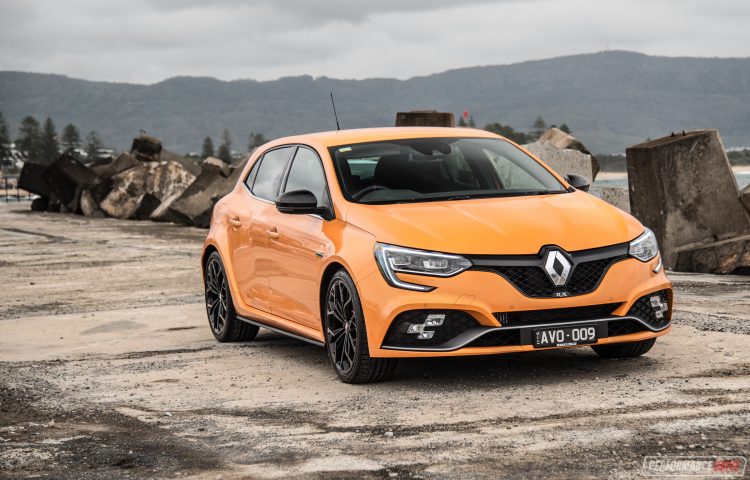 Renault Australia offers the new model in one main form with a 1.8-litre turbo producing 205kW and 390Nm. Unlike the predecessors, it’s available with either a six-speed manual or six-speed ‘EDC’ dual-clutch auto, helping to reach a broader market.

There’s also a Cup pack available which adds a more hardcore chassis tune and upgraded brakes, among other things, while a Trophy variant packing 220kW is on its way later in the year. Here we have the Cup example to test, which is only available with the manual transmission. 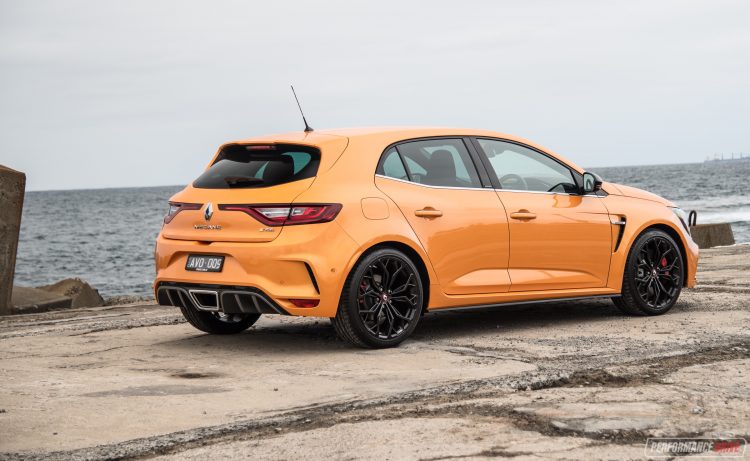 Based on the latest, fourth-gen Megane, the new RS looks almost completely different on the outside. It doesn’t just sport a variety of racing stripes and special stickers. Designers have given the body a complete makeover so it looks like it’s driven straight out of a racing development shed. It’s fat. Check out the rear end. It looks like a rally car, with pumped out rear haunches, vertical vents within the widened rear bumper bar, and a deeply-finned diffuser with central exhausts lower down. In fact, the Megane RS stands 61mm wider than the regular Megane, with the front track 29mm wider and the rear track 12mm wider. This gives you some idea of its sturdier stance compared with the regular model.

Going for the Cup package adds some unique 19-inch alloy wheels that hide red-painted Brembo brake calipers clamping aluminium and cast iron discs. The suspension is also overhauled in Cup spec, using springs that are 10 per cent stiffer with revised dampers and stabiliser bars, while the engine power is sent through a tight Torsen limited-slip differential. The differential aims to significantly improve front end grip and power delivery, and is optimised for deceleration and acceleration. 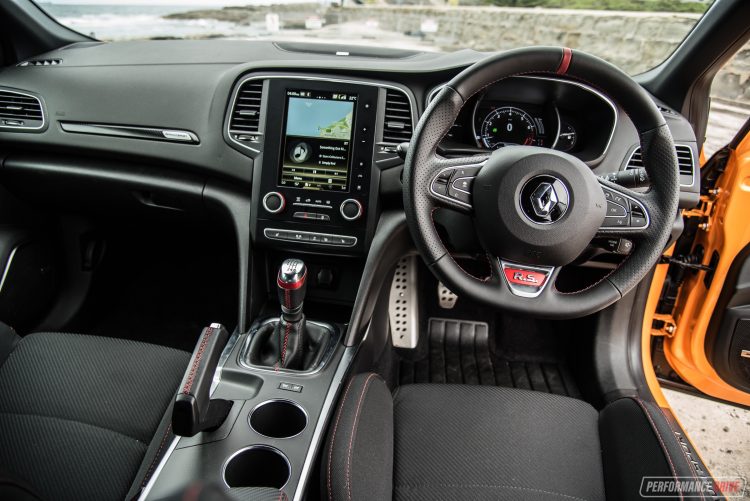 Inside, the Megane RS is neatly enhanced over the regular Megane. It’s not over the top in any area. Carbon-fibre-look soft material is used for the centre console armrest and bits of the door trim to provide that racy theme, with red stitching for some contrast.

We like that Renault hasn’t fit leather seats. Instead, the awesome sports seats are covered in durable and grippy cloth, which is breathable compared with the fashionable leather wrapping. About the only element to the decor that we don’t like is the use of cheap and scratchy plastics, which are applied to some of the dash and door trim. It would be acceptable on a cheaper car, but considering this isn’t the cheapest hot hatch in the segment, the interior should otherwise be quite premium in all areas.

Up on the dash is Renault’s portrait-style R-Link touch-screen media interface. This is one of the least appealing in the class in our opinion. Some of the functions require far too many menu selections, and the graphics and display of menus isn’t as friendly as it could be – particularly compared with the rivals. We find it to be quite distracting to use while driving, and the volume buttons instead of a conventional knob add salt to the wound. 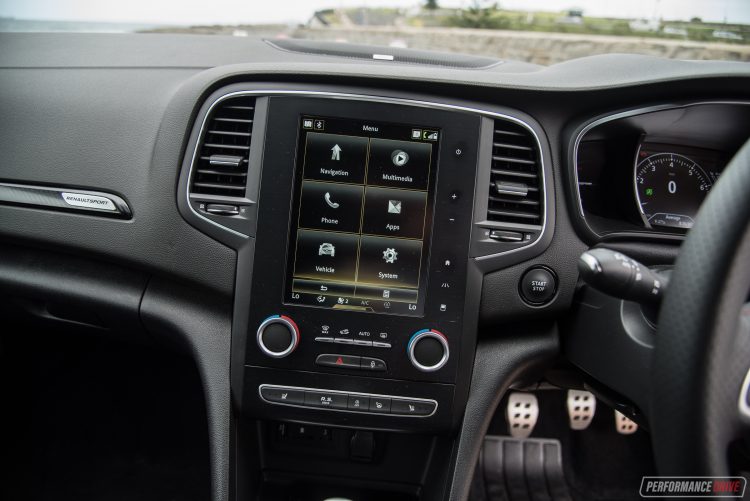 Passenger space is good for this class, with decent headroom and legroom in the front. The big chairs also provide plenty of lateral support without feeling cramped, even for larger individuals. It does seem like you sit quite low to the floor though, which is good as it makes it feel like you’re driving a racing car or a go-kart. But this does mean you need to bend down to get in and step right up to get out.

Rear seat space is also more than acceptable for this class, with soft cushioning providing decent long-distance comfort, and a big, chunky armrest in the centre complete with two cup holders to add convenience. Boot space is rated at 434 litres, overshadowing many rivals. 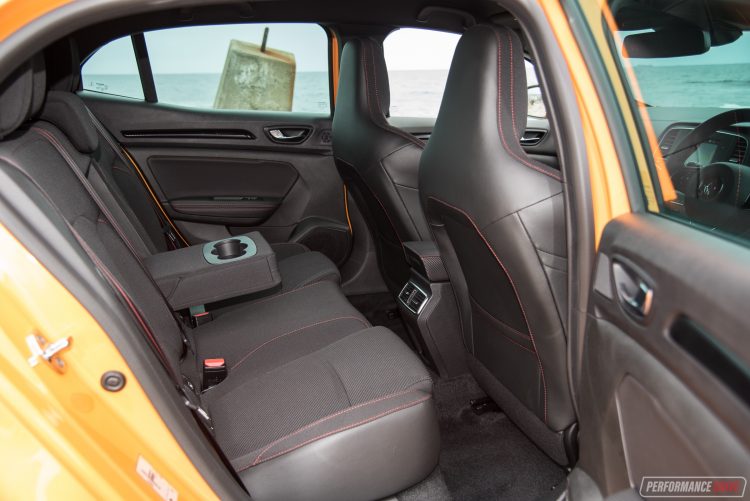 This is obviously the area that matters most. How does it drive? Around town the new RS offers great visibility and a reasonably settled ride. We wouldn’t call it soft and comfortable. The suspension is firm, but for a hardcore hot hatch like this it’s actually not too bad. Even over those unseen potholes or speed bumps, the car is able to absorb impacts without upsetting the stability. This is in part thanks to the Megane’s latest hydraulic bump-stop technology. It’s essentially a shock absorber within the shock absorber, catching extreme compression as the damper approaches the end of its range.

There are no adjustable dampers but you do get a handful of driving modes. In the standard mode the steering is light and the throttle response is normal. Flick it into Race mode and things immediately become more serious. Even the exhaust note becomes louder, and, annoyingly, so does the fake engine sound emitted through the in-car speakers. Why does Renault offer this? Why does any manufacturer offer this? Nobody is interested in fake engine sounds. If we wanted that we’d just turn down the volume and make our own car noises with our voice box, like a kid. Just let the engine produce whatever noise it makes. Sheez.

Out on the highway the new 1.8-litre turbo purrs along in hush refinement. It offers a peak power of 205kW at 6000rpm, which puts it perfectly in line with the main rivals, with a maximum torque output of 390Nm available from 2400rpm. That latter figure is impressive for a 1.8L engine. You’d be forgiven for thinking it’s a 2.0L or even 2.3L unit, as the low-down torque is strong and responsive.

Turbo-lag is really only evident in higher gears and at very low revs. Even during lag, the turbo doesn’t suddenly spool up and smack you in the back. Rather, it builds progressively, almost like a naturally aspirated engine. Forgetting the fake sounds, the actual engine note is very cool high up in the revs. It roars angrily like a non-turbo engine – perhaps as a throwback to Renault’s heritage – and the exhaust produces plenty of crackles and pops out the back. 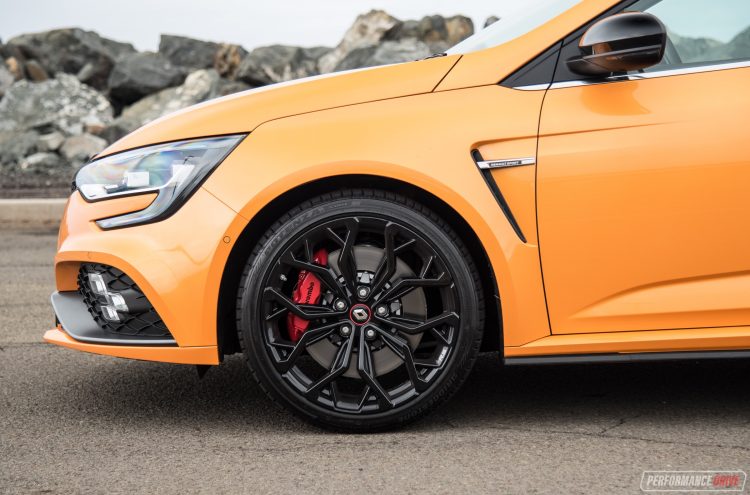 To really enjoy and appreciate what this car is about you need to get out onto the open road, or, even better, up into the mountains. The first slice of excellence comes from the 4CONTROL four-wheel steering system – the first of such technology in this class. At first it feels a bit unusual, like most 4WS setups. But it doesn’t take long until it becomes a very close companion. It follows your moves and encourages you at all of the right times and in all of the right places. In fact, there are very little surprises that spring up. It won’t abruptly snap into oversteer, or run out of front end grip and push into understeer. The level of consistent g-force possible is amazing.

Around slower corners the rear wheels are angled slightly (up to 2.7 degrees) in the opposite direction to the front. This helps the car pivot around corners, getting the back end around and virtually shortening the wheelbase. At higher speeds (above 60km/h) the rear wheels are angled (up to 1.0 degree) in the same direction to the front. This virtually extends the wheelbase and makes the little hatch feel like a larger, more stable vehicle. And you can feel it. High speed sweepers can be conquered with confidence not experienced in other hot hatches. There is very little nervousness felt from behind the wheel. 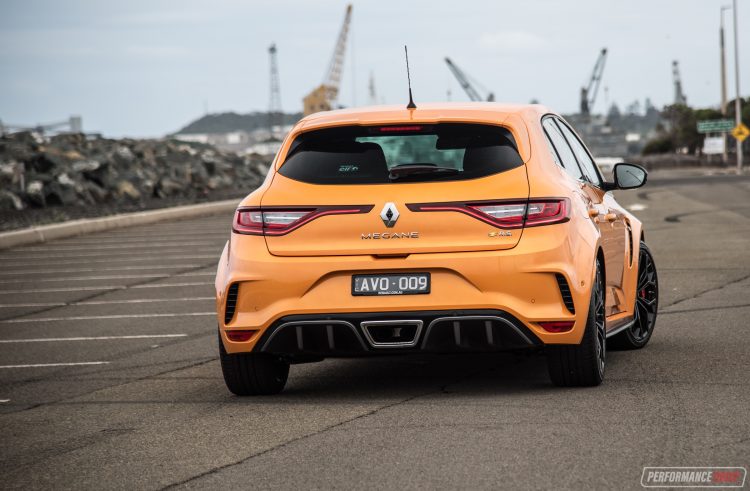 In Race mode Renault says that switchover point for the angle of the rear wheels is lifted to 100km/h. So, around a tight, twisty mountain run the rear wheels actually turn in the opposite direction to the front most of the time. No other car in this class is able to offer agility like this. It turns in so sharply, it’s sometimes hard to keep up with it during quick switchbacks. In fact, we think it does cause a little bit nervousness at the rear during hard braking leading into a tight bend, at speed, as the car tends to tuck in almost too quickly. And then if you need to feed in opposite lock, even just a smidge, the effect can bounce back at you.

It might be one of the smallest engines in the class, but boy is it a punchy one. This thing flies. We timed 0-100km/h in just 5.87 seconds, which is about the quickest we’ve seen in this specific front-wheel drive class. Grip is definitely enhanced with the limited-slip differential, but it’s the mid-range pickup that pulls hard through the gears. There’s nothing you’d change about this powertrain. It really does haul.

There’s no doubt the Megane RS remains as one of the most hardcore hot hatches on the market. We think it’s the best-looking, and it’s clearly the cleverest, with its four-wheel steering, and one of the fastest. Is it the best overall, though? The definition of a hot hatch is usually noted as something like; a small yet practical hatch that can be driven every day with no major compromise, but also a car that can be driven really hard while providing excellent feedback, speed, and control. Perhaps above all, a hot hatch needs to be fun.

Renault has hit all of these points with great success, except for in-car practicality. We don’t like the cumbersome touch-screen media interface and we really don’t like the fake engine noises coming through the speakers. These are both very easily dismissed though with a quick blast along your favourite road. Get into that six-speed manual and really give the limited-slip diff a workout, along with the four-wheel steering, and you’ll be blown away.