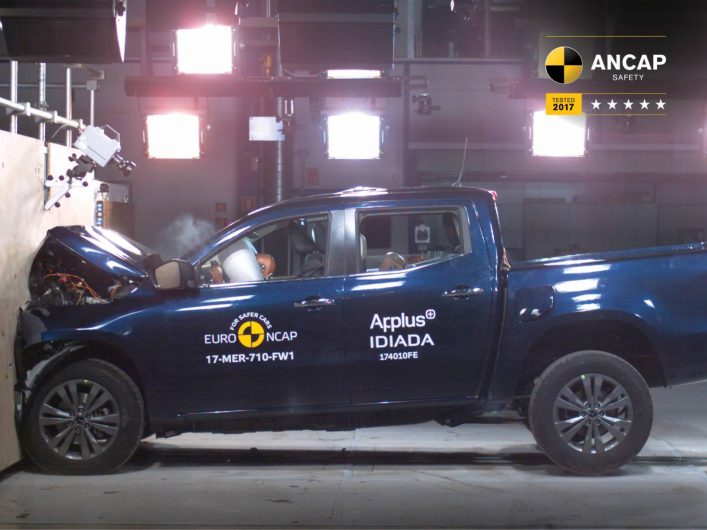 Due to hit the local market from April 2018, the Mercedes-Benz X-Class is based on the Nissan Navara chassis, but extensively re-engineered by the three-pointed star brand. The donor vehicle also scored the full rating upon its debut in 2015, so it was a strong foundation from a safety standpoint.

“This is a game-changer for the ute market and puts pressure on competing brands. The light commercial vehicle segment has generally lagged passenger cars and SUVs with regard to safety specification, so the inclusion of AEB as standard across the X-Class range is to be commended.”

When it arrives in April, the X-Class will be available in three grades; Pure, Progressive and Power, in two and four-wheel drive variants. Prices start from $45,450 and go up to $64,500. While initially only a 2.3-litre twin-turbo diesel with 140kW and 450Nm will be available, a 3.0-litre turbo-diesel V6 will join the range later to give Mercedes-Benz a rival to the Amarok V6. The X 350 d will be offered exclusively with 4×4.

Check out the video after the gallery below to see how well the new Mercedes-Benz X-Class performs during crash testing. The full ANCAP report can be read here.