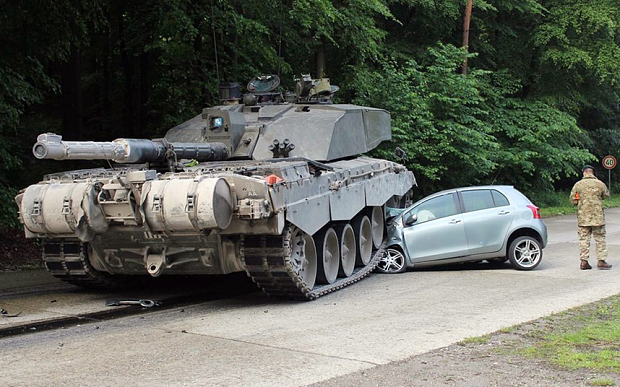 Everyone has had some pretty scary moments when learning how to drive, but it’s fair to say this unlucky German learner driver takes the cake.

While driving through the small town of Augustdorf, the young driver turned in front of a column of British Challenger tanks. “The soldier had no chance to slow down,” an emergency department spokesman told reporters. Nobody was injured.

To avoid an even nastier incident, the 24-year old soldier at the helm of the tank instead turned at the last second to engulf the engine bay of the car, rather than consume the cabin.

This area is very well known for its heavy artillery roaming the streets. There are two NATO affiliated military bases nearby which regularly run exercises along ‘Panzerringstrasse’ road, which translates into English as ‘Tank Ring Road’.

This is the second tank-related accident to occur in recent months, after a British tank’s tracks malfunctioned and the driver plowed into an elderly German couple’s front garden.