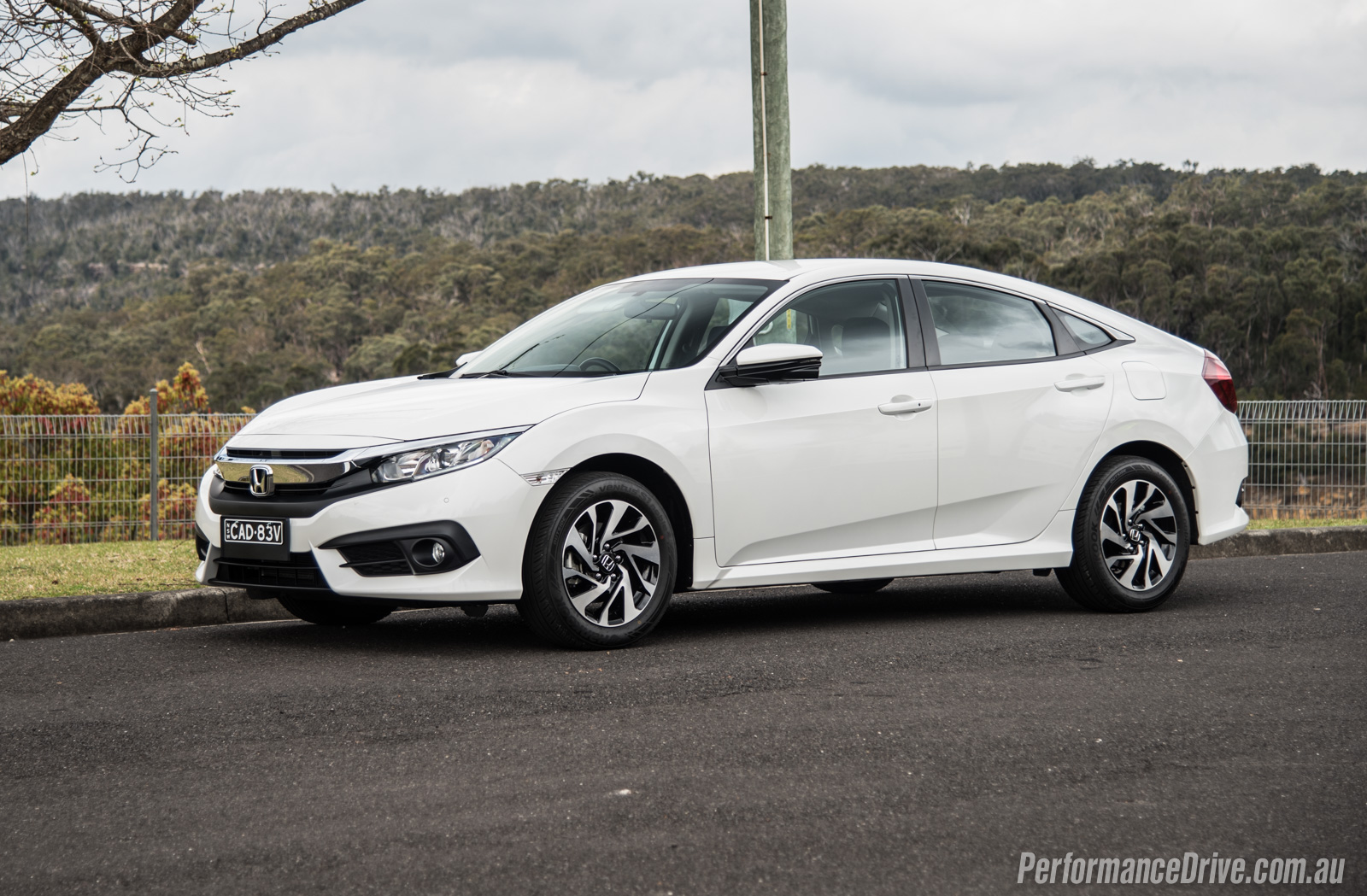 In terms of small cars, this year has not seen too many all-new entrants. Other than a revised Mazda3 last month and an all-new Holden Astra on its way, the 2016 Honda Civic sedan stands out as one of the few. And it’s quite revolutionary compared with the outgoing version. 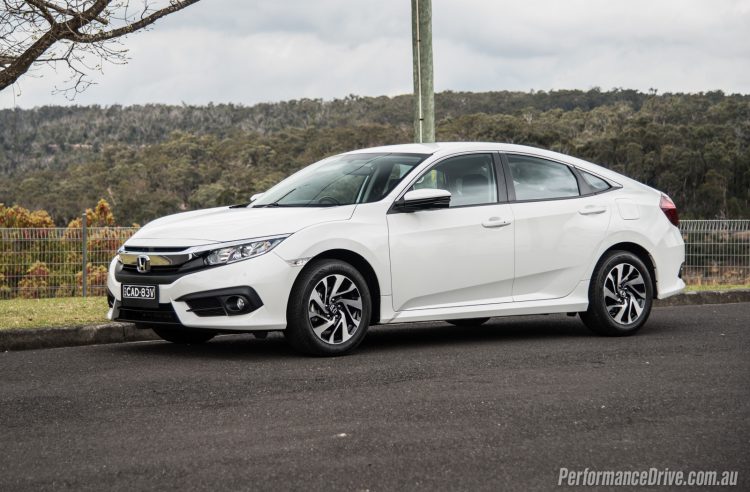 Ever since the seventh-generation Civic of 2000, the sedan and hatch went in separate styling directions, with the sedan catering to more conservative tastes while the hatch took on a more daring, dynamic role. For the tenth generation Civic, the two are reunited via a sleek, wedgy styling theme and a new small car platform.

For now we have the Thailand-sourced sedan, which will be joined early next year by the British-built hatch. Excitingly, a new version of the Nurburgring-conquering Type R is also coming here late next year.

The new Civic has somewhat of a premium positioning, starting at $22,390 for the base VTi and stretching out to $33,990 for the VTi-LX.

We have the $24,490 VTi-S here, which is the top spec 1.8-litre variant. To spare you any guessing, the new Civic is outstanding in a way that should have many competitors sweating bullets. Read on to find out exactly why it belongs at the pointy end of the cut-throat small car segment. 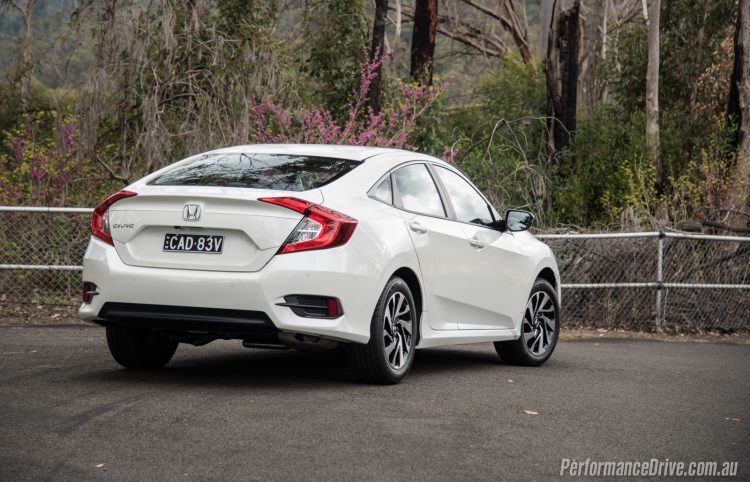 The sedan has grown in every dimension except height. Length has grown to 4644mm, width to 1799mm, wheelbase stretched to 2700mm, but it is 19mm lower. The new shape manages a double whammy of clever packaging and sporty, sleek style, with a swoopy, liftback-esque roofline which demonstrates a sedan needn’t be the plain Jane option. Looks are subjective, but to us, the Civic is a real breath of fresh air, with its LED front and rear lights setting it off, plus the CNC-machined rims of our VTi-S.

The silhouette and absence of a hatch are vaguely reminiscent of the Tesla Model 3 sedan. This imbues the Civic with 519-litres of usable boot space.

All Civic buyers are greeted by a high quality interior that banishes the two-tiered layout of its predecessor. An angled 7.0-inch touch-screen panel proves mostly intuitive to use, with a nice night-sky screen saver to boot.

Accessing the climate functions is easy enough but the absence of tuning and volume knobs for the audio system is a pain. Once you master the touch-sensitive volume pad on the steering wheel though, it’s all good. Higher grade models get Apple CarPlay and Android Auto but we couldn’t find any evidence in this model. Satellite navigation is also absent but Bluetooth streaming is excellent. 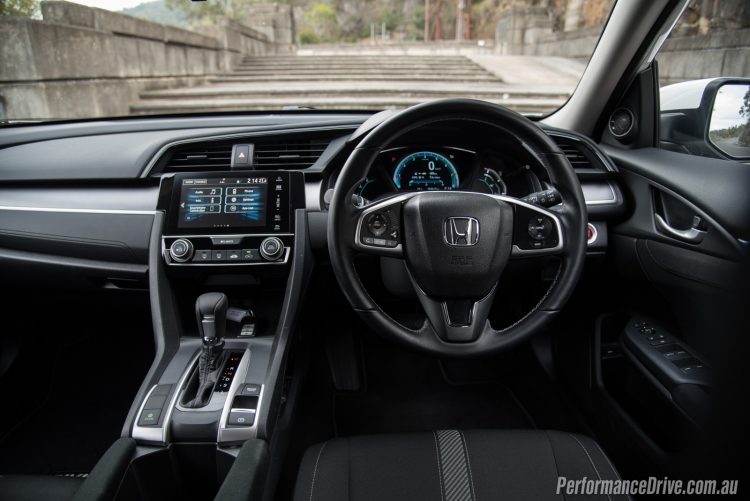 While we’re on the the subject, the standard eight-speaker stereo is pleasingly crisp and loud in equal measure, not succumbing to distortion at any volume. The digital dash is refreshingly simple and easy to read at a glance – a stark contrast to the old twin binnacle that almost sends you cross-eyed. The blue LCD for temp and fuel gauges is pretty and upmarket too.

There is storage ahead of the centre stack and a clever port for cords to drop down through to the connections below. Ample rear seat accommodation makes you wonder if a larger car is even necessary, however, there are no climate vents in the back which could present a problem in summer.

At this stage we are genuinely surprised at how compelling the new Civic is turning out to be, but would the delights continue once it is no longer stationary? 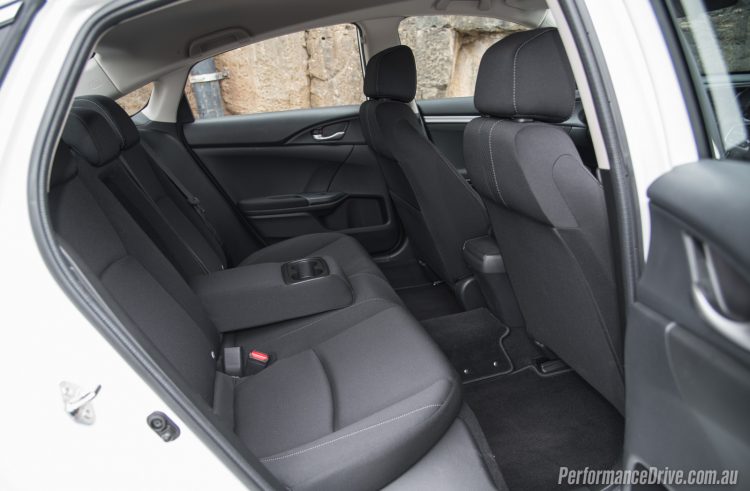 You probably shouldn’t expect the base 1.8-litre engine to be anything special but it does prove to be very frugal, refined, and pretty quick when you wring its neck. Off the line, the lack of low down torque and CVT make the car somewhat lethargic, and this is as close to a let-down the car gets. However, put the shifter into S mode and it takes on a different nature entirely.

Thankfully, Honda resisted the temptation to put artificial ratios in Civic’s CVT, like what some other carmakers do. We are not a fan of this approach as it doesn’t provide any engine braking and feels like a computer game. In 1993, Williams produced the FW15C F1 car with a CVT. Proving the merits of a transmission that keeps the engine in its optimal power zone, the racer was subsequently banned for being too fast.

Honda’s CVT channels the contraband FW15C when you put the lever in S. The sensation of the engine sitting at 6700rpm, with no rev-limiter bouncing while progress increases rapidly is a genuinely enjoyable one and shows that a CVT really can have a fun side to it.

If manuals are your thing, you might have to wait for the hatch next year. Or better yet, the Civic-based Acura ILX has an eight-speed dual-clutch gearbox that could spread to other Hondas. At present it is US market only.

During normal driving in and around the city it seldom returns more than 8.0L/100km in fuel consumption. This is impressive given its space and breadth of capability.

As for handling, the steering is quick and reactive off centre, giving the Civic a sporty flavour through corners. The chassis is planted and stiff, responding faithfully to even the most sudden inputs with excellent stability. Wearing tall 215/55 R16 tyres means comfort and economy is of prime importance, but these do roll and fold when really pushed around corners. In that respect, the eco-minded tyres are probably the weakest link in this car’s otherwise brilliant handling capabilities (for the class).

It is an entertainer, though, which makes threading corners together feel as satisfying as gliding scissors through wrapping paper? We would stop short of calling it thrilling or exhilirating but there is definitely an element of fun to the driving experience that we weren’t expecting. We also think it can be an enjoyable experience in a way of being a smooth, quiet, and comfortable touring sedan. In our opinion, it is one of the most relaxing vehicles in this class. 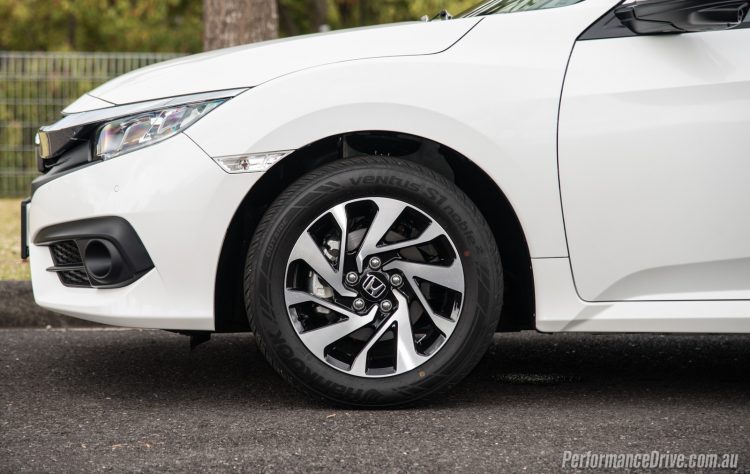 Honda is back and we haven’t even tested the 1.5-litre turbo version yet or the upcoming hatch, let alone the next Type R; a car we are seriously looking forward to now we know what a strong foundation it has. The era of mediocrity is over and Honda appears to be returning to what made it great before; strong engines, sporty upmarket flavour and impeccable build quality. Honda seemed to have lost the first two in pursuit of the middle American dollar, as exemplified by the milquetoast Accord hybrid.

If you can make do without 16-inch alloy wheels, the excellent Lane Watch system and smart key, even the base $22,390 VTi poses a solid argument for your dollars.

CONS:
– Slow from a standing start
– Styling might not be to all tastes
– Space saver spare tyre
– Lack of volume and tuning knobs (buttons only)
– No manual transmission option (reserved for upcoming hatch?)