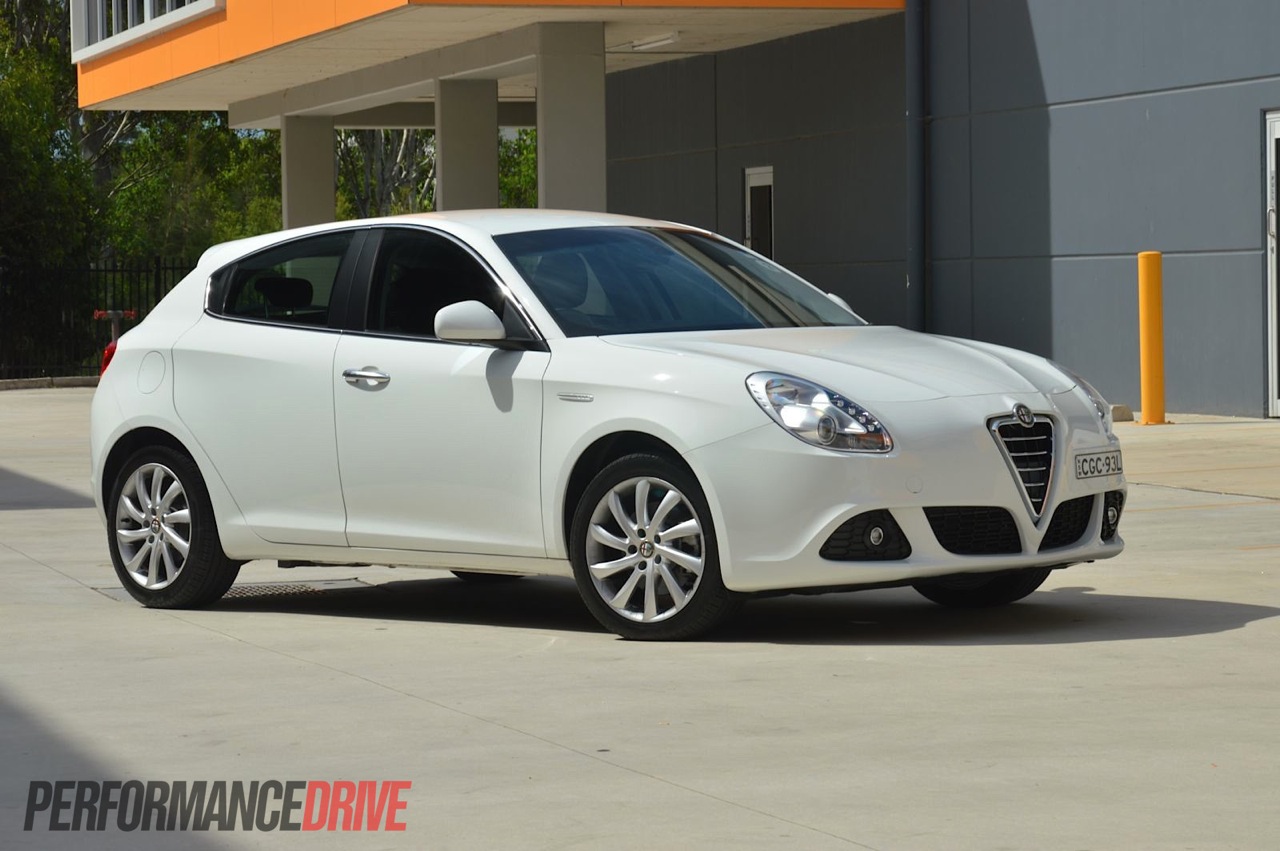 Sitting with a sultry glance in its eye, the 2013 Alfa Romeo Giulietta JTDm is also quite sparing. Who would have ever thought a car could be both sexy and frugal? 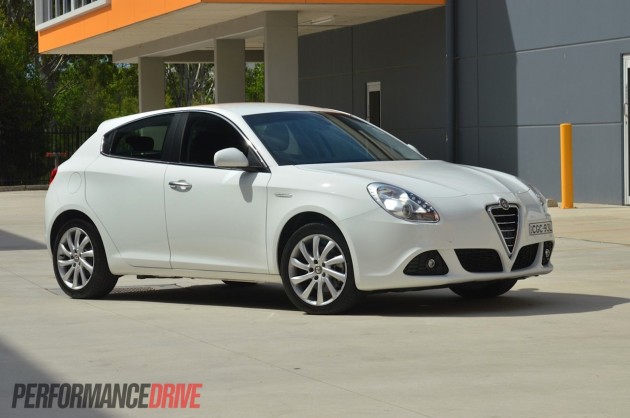 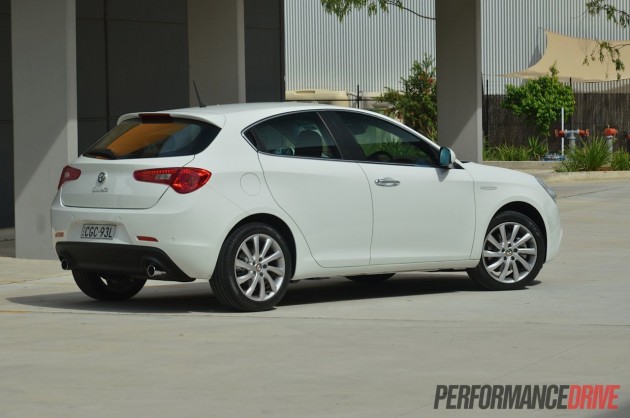 Whenever we think of a small European hatch with a sporty turbo-diesel engine, the Volkswagen Golf GTD often springs to mind. It is, after all, considered the benchmark in the segment. However, it seems Alfa Romeo has been offering perhaps a more exciting, more energetic, and more passionate offering all along.

The current Alfa Romeo Giulietta has been on sale in Australia since 2011, but up until recently prices have been a little too high for it to be a strong competitor in this fearsome segment. Under new directorship in Australia, Fiat and Alfa vehicle prices are now more attainable than ever, which means for the Giulietta, its appeal goes further than just the sexy body.

The JTDm is the turbo-diesel variant. It’s the only diesel in a three-tier lineup, sitting in the middle of the range underneath the flagship QV (Quadrifoglio Verde). It comes with a dual-clutch auto transmission with front-wheel drive – there is no manual option.

Power comes from a 2.0-litre ‘MultiJet’ turbocharged diesel four-cylinder engine producing 125kW and 350Nm, putting it on par or in some cases ahead of the competition.

The Giulietta is fairly light in weight for this segment, tipping the scales at 1335kg. This gives it a leading edge over most rivals in terms of its power-to-weight ratio.

Prices for the JTDm start at $35,250, some $5740 cheaper than when the previous pricing structure was in place. 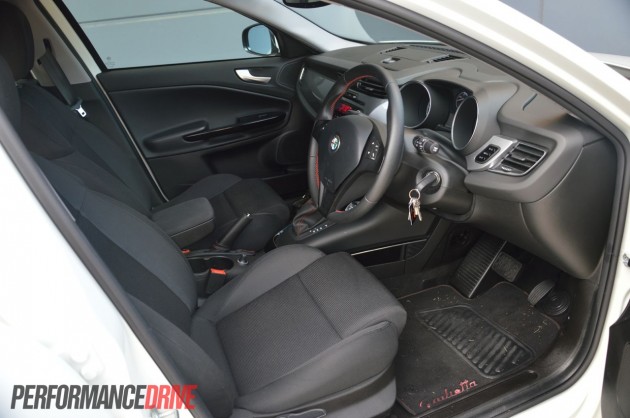 When you first hop inside the Giulietta, there’s no mistaking it as anything but an Italian thoroughbred. You can see there has been significant attention spent on sculpting the finer details and switchgear.

The dashboard is curvaceously contoured with a multi-tone theme, while spearing through the centre is a metallic painted panel which makes up the majority of the fascia, giving a three-dimensional look.

The fit and finish and build quality is high inside. There’s no noticeable rattles or creaks, and the centre console and everything that you touch seems firmly fixed in place. Even the plastic fixtures and circular rotary knobs aren’t as brittle and delicate as they look. 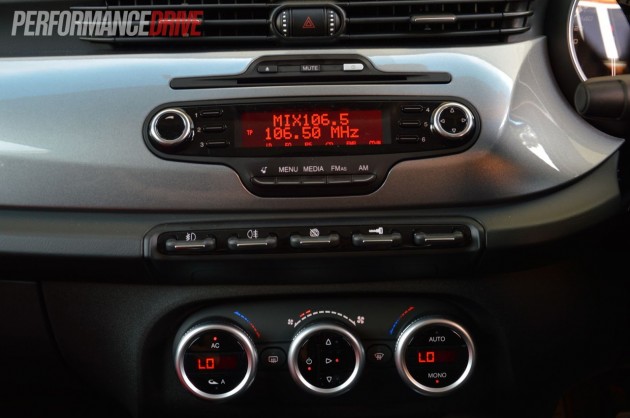 User-friendliness is not normally a strong point in Italian vehicles. With the Giulietta, that isn’t the case. The controls fall exactly where you would expect to find them, with the climate control and audio unit each housed in a separated section of the dash so things aren’t confusing. There’s also steering wheel controls for the driver with clearly marked out buttons for volume and modes.

Where it all does fall a bit behind is with technology. There are no real standout features, and in a world of LCD touch-screens and head-up displays, the Giulietta is lacking a bit in that area.

There isn’t a shortage of the standard almost obligatory features though. You get dual-zone climate control, a decent six-speaker sound system which doesn’t mind cranking out loud music with good bass, Bluetooth and USB connectivity with voice recognition, and auto headlights and wipers.

Making the drive more versatile, the Giulietta features Alfa’s ‘dna’ driving mode system, with Dynamic, Normal, and All-Weather settings for the throttle sensitivity, suspension firmness and steering weight. All provide a noticeable change to the way the car behaves. 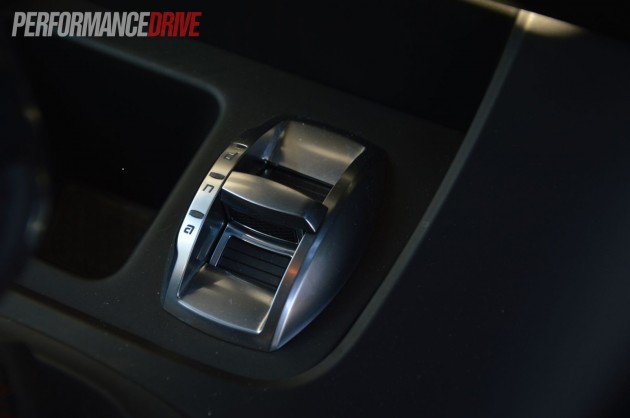 There is a hill-hold system for taking off on hills, but unfortunately this doesn’t operate in reverse gear very well. Obviously, this presents big problems when you try to reverse out from a driveway as the car will roll forward the moment you nudge the accelerator upon releasing the brake pedal. You end up having to do an old-fashion handbrake start. The issue is almost entirely down to the slow-responding dual-clutch auto transmission. More on that below.

In terms of boot space, all Giulietta variants offer 350 litres. This is slightly below par compared with most rivals; Volkswagen Golf Mk7 (380L), Audi A3 (365L), BMW 1 Series hatch (360L), and the new Mercedes-Benz A-Class (341L). The volume can be opened up to 750 litres with the rear seats folded down. 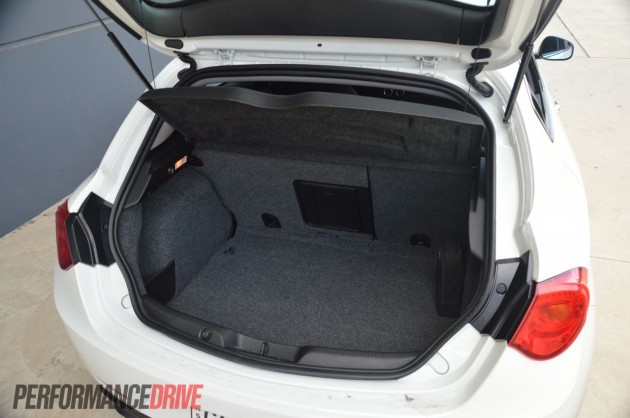 The Giulietta would have to be the most elegant small hatch in the business. It’s one of the company’s best modern designs in the mainstream sector, in our opinion.

There’s the unmistakably Alfa upside down triangular grille dominating the front end, with intricately detailed headlights that look as though they were created by an entire design team alone. Swooping down to the rear end is a curvy cute hatch which wraps in perfect proportion to the rest of the car. It also looks decidedly fat and sporting from behind. 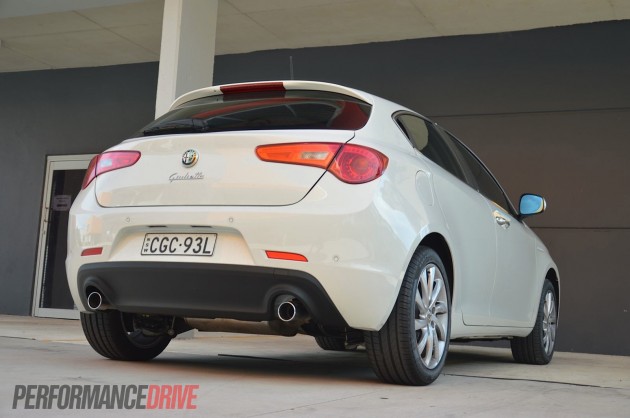 You can really appreciate the attention to detail which goes beyond most in this class, such as the silver door handles, the ‘shaved’ rear door handles which are relocated and incorporated in the rear quarter window, and fine LED turn signals. There’s also a neat rear lip spoiler and a bit of a chin spoiler at the front. 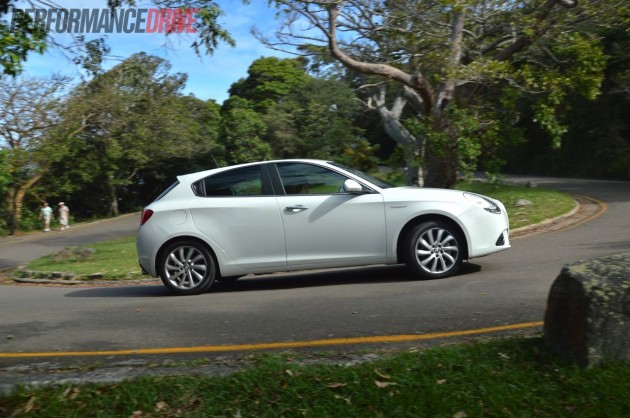 Floor the throttle off the mark and there is some hesitation while the dual-clutch transmission engages and transfers the power. Even when you’re up to speed, the transmission is one of the slower-changing twin-clutch units on the market. It’s still very quick compared with a normal automatic, but a little behind in terms of dual-clutch technology.

The gearbox will allow you to hold the brake pedal and build the revs for a shotgun start though, unlike most other dual-clutch setups, providing a semi-launch-control take off experience.

Unfortunately, the delay in response under normal conditions is accompanied by a ‘stretchy’ throttle character as the turbo spools up and puffs into the engine. Taking off and trundling about in tight car parks is not what you would call the smoothest of experiences. Once you get used to it you can anticipate these delays and counter negotiate them to a degree by using the throttle very gingerly, and waiting for the slack to be taken up. 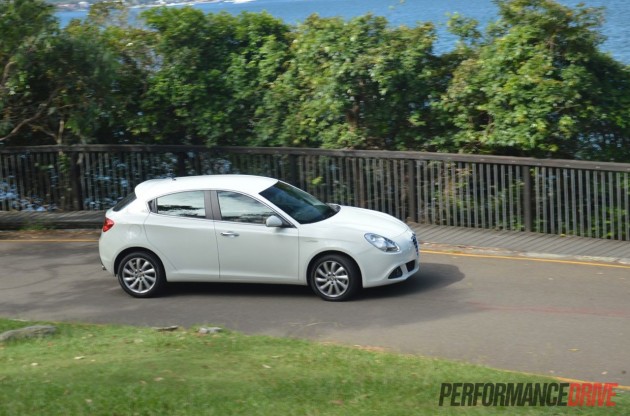 Now to the good stuff. The Giulietta turbo-diesel is one of the quickest packages in this segment and in this price range. We timed 0-100km/h in a very brisk 7.2 seconds, which easily puts it ahead of the BMW 118d (8.8 seconds), the Audi A3 TDI (7.9 seconds), the Citroen DS4 diesel (12.4 seconds), and even the sports-oriented Volkswagen Golf GTD (8.0 seconds). The only vehicle that come close for performance is the new Volvo V40 D4 (review coming very soon), capable of 7.5 seconds.

Peak power in the Alfa (125kW) is reached at a high 4000rpm, which gives you an idea of the engine’s personality. It encourages you to rev right up to its 5000rpm redline. The engine sounds pretty good too, for a diesel, with minimal diesel clatter even from idle. The quality sound is partly thanks to the MultiJet technology which is what Alfa calls its variable injection system. The system is able to deliver up multiple diesel injections per combustion sequence for smother and quieter operation. 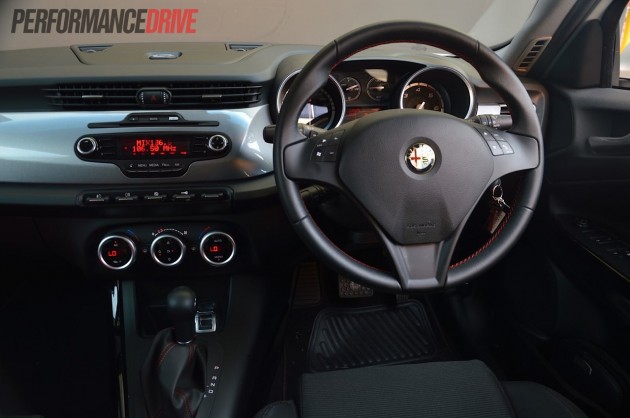 It feels pretty fast from behind the wheel, especially when you’re up and running, providing a satisfying rush of torque from low revs. Maximum torque (350Nm) is available from 1750rpm too – for short periods (overboost) during full throttle – allowing you to make a swift getaway from corner exits.

Being an Alfa Romeo, the company renowned for decades of truly iconic and legendary sports cars and racing cars, the Giulietta lives up to its family tradition. The steering is sharp and highly communicative, giving you utter confidence in where the wheels are placed on the road and how well the tyres are coping with your demands.

It feels fun to throw through a series twists, and the transmission, although a little bit slow in shift times as mentioned, comes with paddle shifters helping you feel like a bit of a racing car driver.

Overall, the Giulietta JTDm is one of the more fun and energetic diesel small hatches on the market. With good brakes and compliant yet sporty suspension creating an enjoyable and accomplished drive. 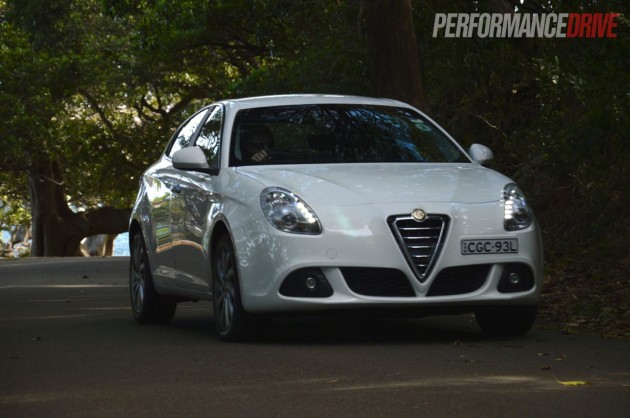 In a market segment that is quite overwhelming, often capable of suffocating some of the less popular contenders, the Giulietta JTDm is a refreshing and surprisingly well-sorted package even though it is around two years old now. It offers great performance, fun and active handling, and it’s now available at a decent price. It stands out and above the rest with its striking and sporty design which is applied to every aspect of the car.

The somewhat obvious and potential drawback is of course the old stigma surrounding the reliability of Alfa Romeo vehicles. For decades its cars have been labelled as notoriously unreliable. Now that Fiat is a much bigger company than ever before – recently taking Chrysler under its wings – research and development, and technology, has progressed substantially and the brand is now more advanced than ever.

If, like most car enthusiasts, you’ve always wanted to own an Alfa Romeo but have just been a bit too worried to sign the dotted line, you can rest assured with the Giulietta; it’s a quality product and one that isn’t as highly strung or as fragile as its predecessors. It also equals and even benchmarks the segment in terms of performance, safety, and economy. 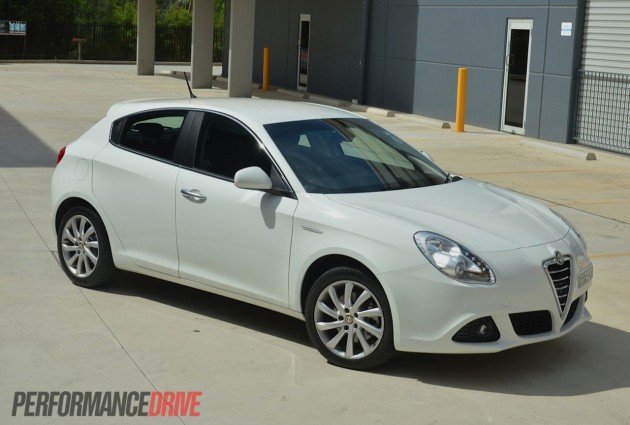