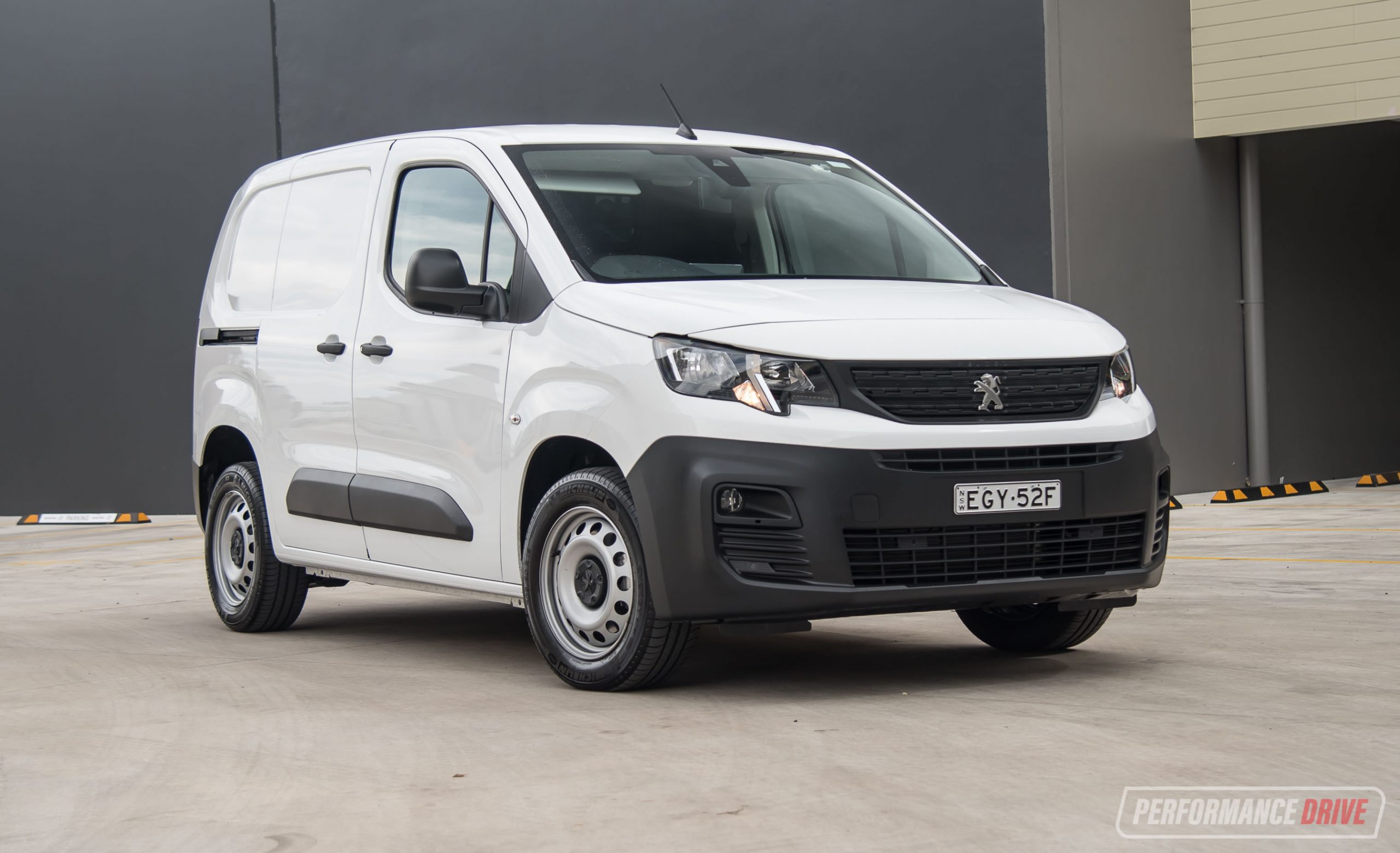 If you’re in the market for a compact van, the latest 2020 Peugeot Partner certainly stands out with its chic European design, plucky turbo three-cylinder petrol engine, and thoughtful interior. 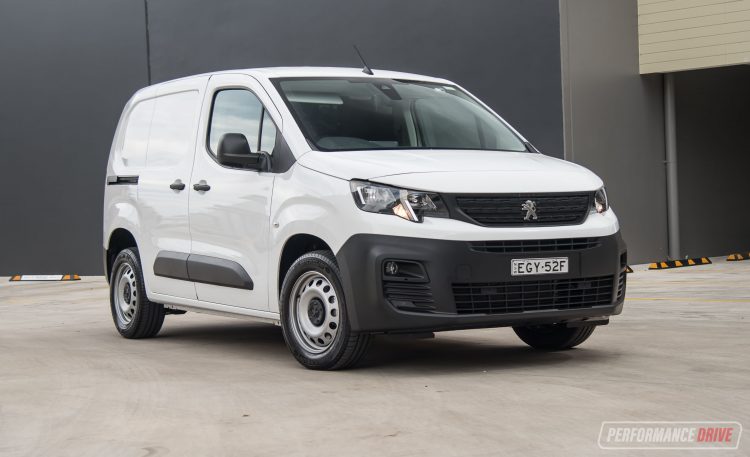 The Partner was first launched in Australia in 2019, hitting the market as the first vehicle in its class to come with autonomous emergency braking as standard across the board. It also packs plenty of other active safety technologies to ensure optimum safety during long hours on the road.

Three different versions are available, including two standard (short) wheelbase models, in petrol only, and a longer wheelbase version powered exclusively by a diesel. Here we’re testing the standard wheelbase automatic petrol, which is the most expensive variant. See below for the starting prices (excludes on-road costs): 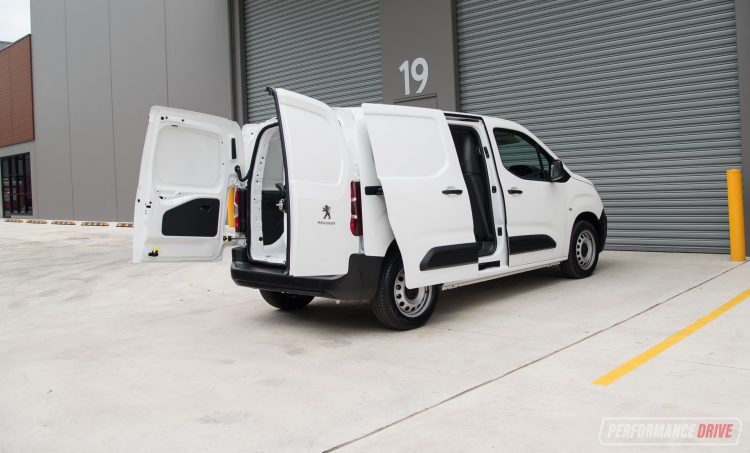 Although the Partner is new to Australia, this is actually based on the Citroen Berlingo, which has been available here since 1999. However, when the Partner arrived the Citroen was discontinued here. Nonetheless, it continues to share the same front-wheel drive platform as the now overseas-only Citroen.

All models in Australia come with 16-inch steel wheels so you don’t have to worry about getting them all scratched during your busy day, wrapped in 205/60 Michelin tyres. The tallish side profile, along with Peugeot-Citroen’s typical cushy suspension, provide a very comfortable ride. More on that below.

You can tell this interior was designed with long, hard work days in mind. It is so practical, with seemingly countless storage spots in every corner. Even in the ceiling. The digital rear-view mirror/camera does take some getting used to, and it is rather annoying that you have to activate/approve it every time you start the car. But hey, it’s better than having a blocked view via a traditional mirror. The separate digital screen in place of a mirror provides full surround-view monitoring from side and rear cameras as standard as well. 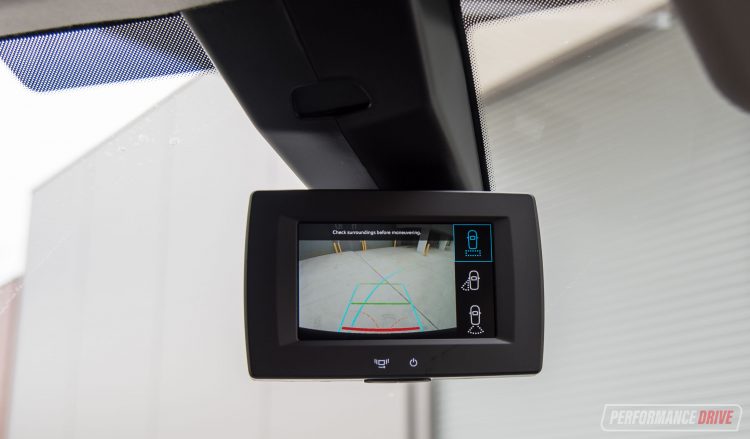 Peugeot’s touch-screen media interface comes as standard, with Android Auto and Apple CarPlay. We think there are too many selections needed to get through some of the in-screen menus, but overall the graphics and functions presented are more than adequate for this class.

There’s a tilt and reach steering column adjustment and a height-adjustable driver’s seat to ensure you find that ideal driving position, as well as a decent four-speaker stereo, cruise control, auto headlights with static cornering lights, and climate control air-conditioning, all helping to support a hard day’s work. 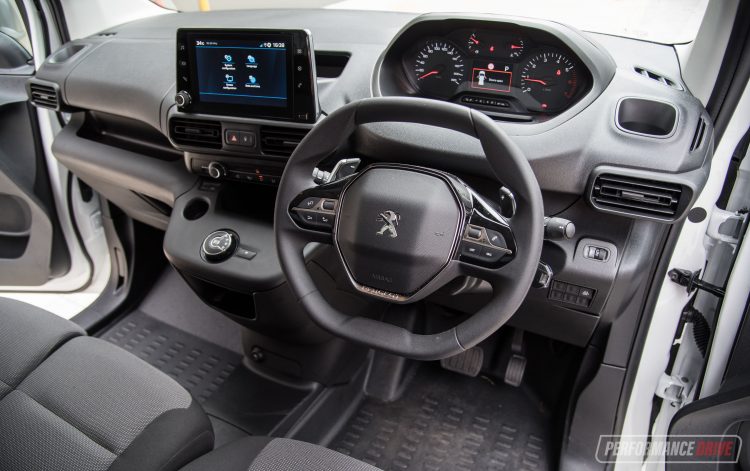 As for cargo space, the Partner SWB presents 3800 litres. The width between the wheel arches is 1229mm, with an overall load length of 1817mm and height of 1243mm. Going for the LWB diesel sees the capacity grow to 3900L, thanks to a loading length of 2167mm.

All models have a payload capacity of 1000kg and a braked towing capacity of 950kg (720kg unbraked). There are a number of handy tie-down points throughout the cargo area, and dual sliding doors available for maximum versatility. The maximum loading height and width through the sliding door is 1072mm and 675mm, respectively, on all variants. 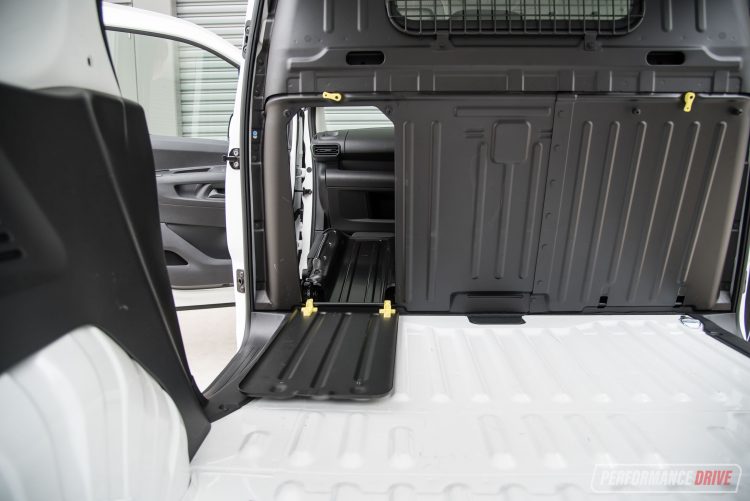 One of the great things about its load-hauling capability is the ‘Moduwork’ latch in the cabin bulkhead. It’s like a secret escape door through to the cabin, allowing you to carry long and skinny items by feeding them through. Clever yet perfectly logical. 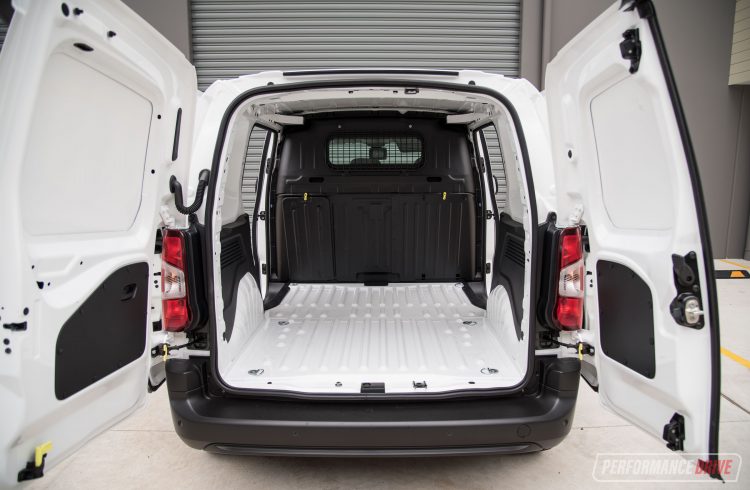 Going for this powertrain configuration gets you the most powerful engine. It’s a 1.2 turbo-petrol three-cylinder, however, unlike the manual version that produces 81kW, this baby develops a neck-snapping 96kW. Jokes aside, it provides more than adequate performance for this class.

Although a peak torque of 230Nm doesn’t seem like much, it provides all of its shove from just 1750rpm. It’s strange to think a three-cylinder, and a petrol one at that, can produce all of its grunt from such low revs. Obviously this really helps in commercial vehicles as you’re not often revving about and looking for top end power. 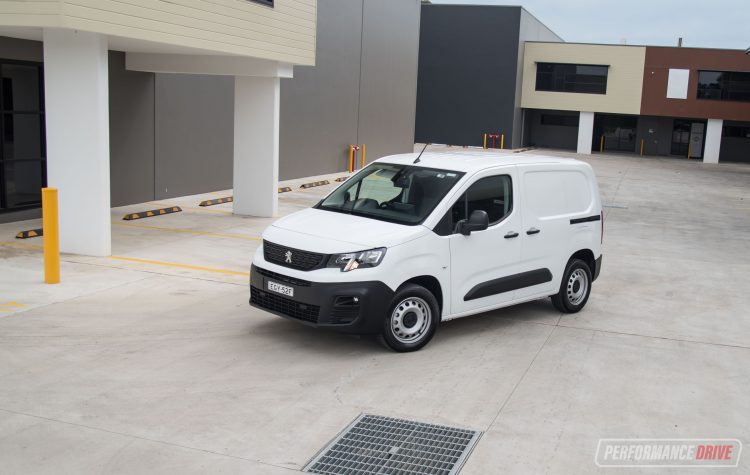 In saying that, peak power does arrive at 5500rpm, where it emits an energetic thrum. We usually enjoy three-cylinder engines for this reason. And it’s the same here. On that note (pun intended), this engine does help to reduce fatigue in our opinion because it is lively and animated. It’s almost like driving a cartoon.

Across the usual performance sprints we clocked 0-100km/h in 10.62 seconds. And before you say anything about acceleration not being important with this type of car, may we suggest you take a moment to remember the last time you saw a white van. We bet it was right on your tail on the highway, wasn’t it? That’s because van drivers are usually in a rush, hence, performance is somewhat important. 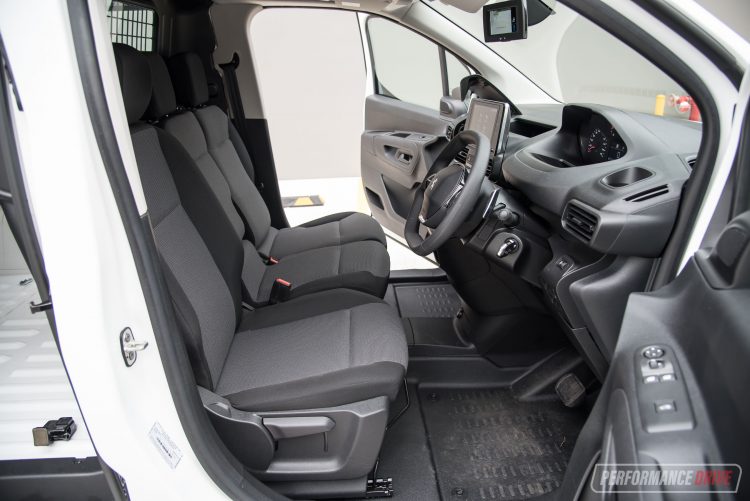 As for the ride and handling, there is no major complaint here. Considering its intended purpose, it steers in well and doesn’t feel out of its depth in most scenarios. There’s decent communication through Peugeot’s ridiculously small steering wheel and electric power-assisted setup, too. The tiny steering wheel means it feels sportier than it is. But that’s fine. Meanwhile comfort levels are great, with a springy and absorbent suspension providing plenty of give, even over rough or unsealed roads.

Fuel economy is listed at 6.3L/100km on the official combined cycle. During our test, which involved a lot of zipping about, albeit with no big loads in the back, we averaged 7.7L/100km. After extended use in normal conditions, with loads, we think you could expect a real-world figure around what we achieved.

This is a surprisingly fun little van to drive around, which is refreshing for this market segment. The 1.2 turbo engine in the high-output tune, with the eight-speed automatic transmission, supplies ample get-up-and-go with impressive low-end torque, but also decent real-world economy.

For those living a busy lifestyle, which we guess is the majority of buyers for this type of car, the Partner is a great companion. You’ll love the clever packaging and endless storage options inside, and the very high level of safety gear for this class. We guess the main consideration is the load capacity, as there are some rivals that offer a bit more space in the back.

CONS:
– Touch-screen menus require excessive selections
– Digital rear-view mirror is great but annoying to have to activate on every start
– Some rivals offer more cargo space