You are looking at one of the best small all-rounders currently on the market. The 2012 Volkswagen Golf GTD offers quality, performance, equipment, practicality, economy, and a hint of prestige. What more could you need? 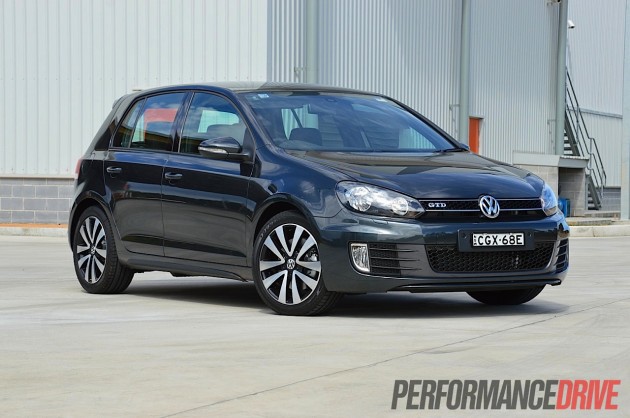 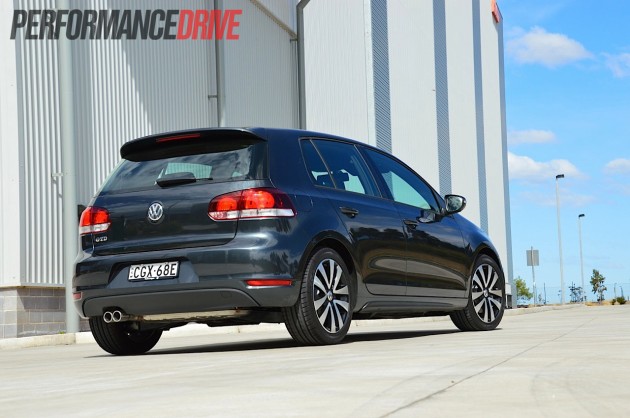 The Golf GTD is like the GTI except it’s powered by a turbo-diesel engine instead of a turbo petrol. It still gets sporty highlights – albeit slightly toned down compared with the popular petrol hot hatch – including a neat bodykit, distinguishing 17-inch alloy wheels, and a spruced up interior with bucket seats.

Power comes from a 2.0-litre turbo-diesel four-cylinder engine producing 125kW of power. That might not sound like much against the GTI’s 155kW, however, it’s the torque that matters here.

With 350Nm on offer it presents the same torque as a Holden Commodore SV6. It also provides considerably more shove in the back than what the 280Nm GTI brings to the table. This means the GTD is able to pull from corners and roundabouts with ease in second, third or even fourth gear.

The best part of the diesel donk is of course the fuel economy. The official Australian Green Vehicle Guide combined cycle rating is just 5.3L//100km. In the real world, we averaged around 6.7L/100km. These are some excellent economy figures, not only for a small hatch, but especially for a sports hatch.

Prices start at $41,790 for the DSG-equipped dual-clutch automatic – the most popular choice – and $39,290 for the six-speed manual version. 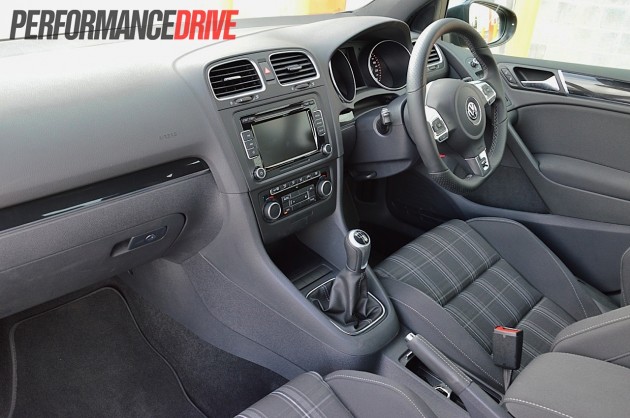 The Golf has been renowned for being a great all-round people’s car for decades. With the GTD, you get that same philosophy only it’s all garnished in a sporty theme while still maintaining respectful economy.

The seats, for instance, are real hip-hugging bucket-style items in the front, while even in the back there is plenty of lateral support for the side passengers. Rear-seat legroom is satisfactory for this segment, but it is a bit tight in the middle seat. There is no middle seat side support either.

To highlight the car’s relationship with the petrol hot hatch brother, the GTD gets tartan fabric inserts in the front and side rear seats. The pattern harks back to the original Golf GTI from the Seventies.

The driver also gets a sporty three-spoke flat-bottom sports steering wheel, just like the current GTI. 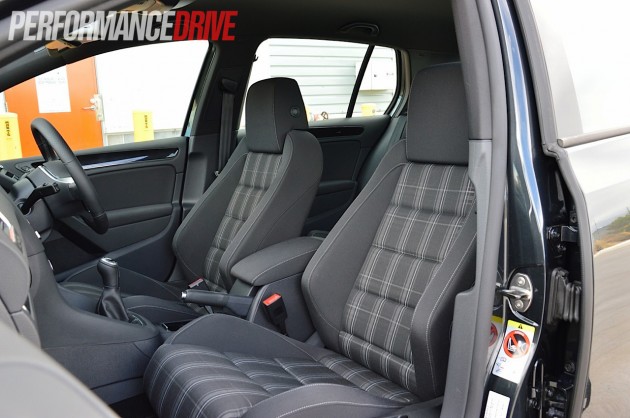 In the dash sits a 6.1-inch touch-screen interface providing control settings for the media/entertainment and the Bluetooth setup. The interface is entwined into an eight-speaker iPod/MP3 compatible stereo with an SD card and USB reader. It all offers quite good quality sound and bass, and the interface is mostly user-friendly. 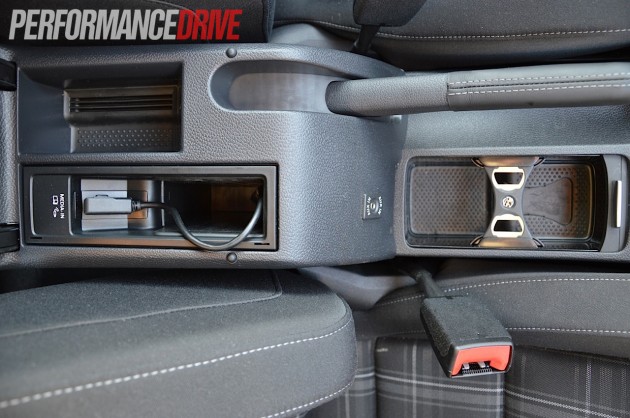 The only real issue we had with the Golf’s practicality was with the centre control. Inside the lift-up lid there is a small and shallow place only just big enough for items such as a wallet or phone. Next to this is a deep and narrow pocket for your MP3 player/iPod. As a word of warning, be sure not to drop a USB stick or coins down into this as an adult hand won’t fit inside to retrieve items.

Mechanically, the GTD comes with lowered sports suspension, an Extended Electronic Differential Lock (like the GTI), a low tyre pressure indicator, and a set of ‘Seattle’ black and polished 17-inch alloy wheels wrapped in 225mm-wide tyres. 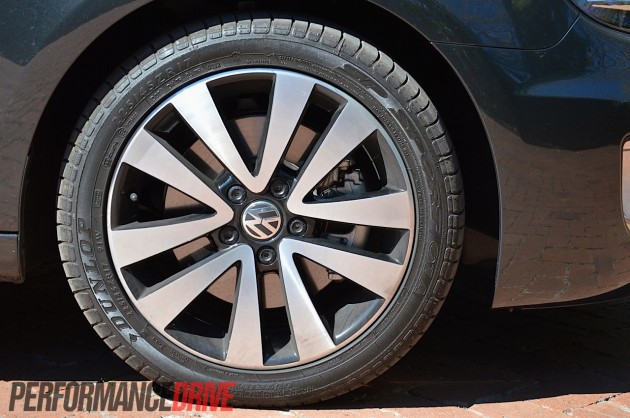 In terms of its design, the GTD isn’t quite as flamboyant as the GTI. The side skirts are the same, as is the black rear diffuser-style section in the lower rear bumper bar. The front grille on the GTD features chrome highlights as opposed to the GTI’s red-trimmed layout.

The GTD also gets the darkened taillight clusters like the GTI and Golf R, and the same lower front black mesh grille and front spoiler as the GTI, along with the spoiler mounted on the tailgate.

In black or this Carbon Steel colour, the GTD could be a bit more sporty in terms of looks. We feel a white example or a light colour would look more impressive, contrasting with the black highlights. 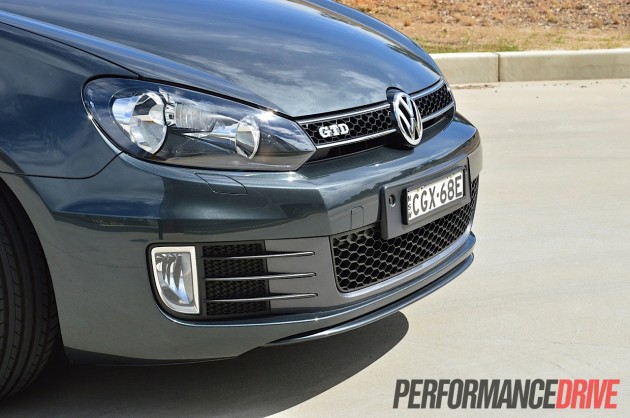 As for safety, all Volkswagen Golfs are rated five stars by ANCAP. The GTD, and all variants in fact, come with seven airbags, stability and traction control, and anti-lock brakes (ABS) with hill start assist and electronic brake force distribution.

To further hit home its German build quality and attention to detail, all Golfs feature a fully galvanised body with 12 years anti-corrosion warranty. The body is also made up of crumple zones front and rear with a rigid safety cell.

When we were handed the keys to this test model we were surprised to find it had a six-speed manual transmission. In a world that is being filled with automatic conveniences at an alarming rate, it’s a refreshing change.

Through the slick-shifting gears the engine feels very strong. It pulls from very low down in the rev range offering a meaty mid-range. Power peaks at 4200rpm, which is fairly high for a diesel. Beyond this the engine’s thrust drops off considerably, and there really isn’t any need to rev it any further.

We timed 0-100km in 8.0 seconds. This was achieved with the traction control off and shifting at around peak power (4200rpm). We only achieved slower times by revving the engine out further in a more typical petrol engine fashion. 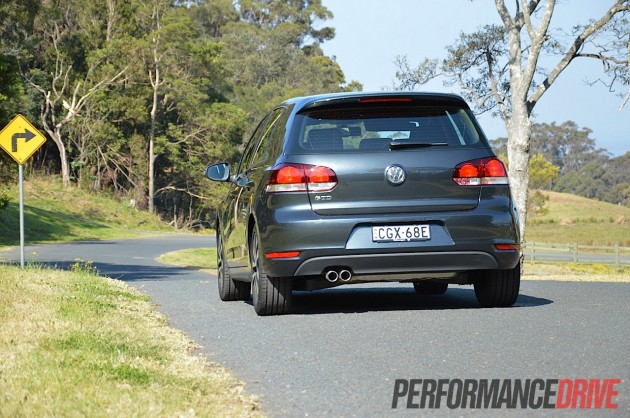 Handling-wise, the initial bite from the front isn’t quite as active as you might expect from a sports hatch, while the steering isn’t quite as sharp and direct as what you get in the GTI. It’s the same electro-mechanical setup as in all Golfs, however, the weight of the diesel engine feels like it is affecting pure balance to a degree.

It’s not that the Golf GTD feels too soft, there is simply a minor moment of creaminess on initial turn in. It’s here where it becomes apparent that the GTD is set up more for comfort rather than sports driving. Especially through slower speed corners.

Overall though it’s hard to find a fault in a car coming from the third-biggest car manufacturer in the world; it’s no wonder the Golf is one of the most popular cars of all time.

The chassis is super-solid while the suspension absorbs bumps and undulations like it’s ironing out the road ahead. There is a thoroughly engineered quality feel to the way it drives.

Even during spirited driving, you have to be really pushing it to cause oversteer or understeer. In that respect, it’s not the ultimate driver’s car. Instead, it is a very confident and sure-footed one. 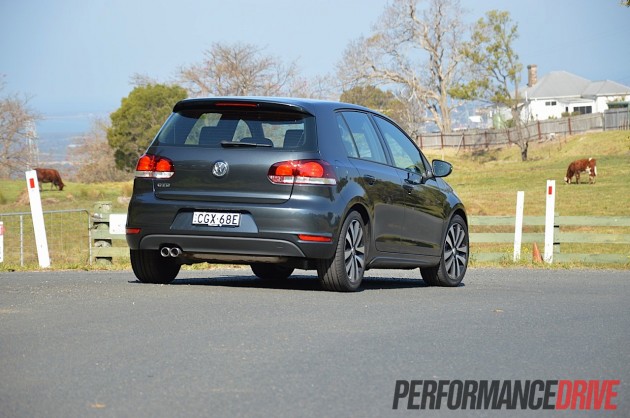 Despite the diesel engine, the drive feels smooth and ‘clatter’ free out on the road. Only on start up and idle are you reminded that there is a diesel under the bonnet. On the outside, the sound is a bit more obvious but it’s certainly not the noisiest diesel in this class.

The brakes aren’t beefed up for the Golf GTD, even the GTI only gets red-painted calipers. That said, they are very good and can withstand plenty of abuse. During our test, involving repeated heated driving stints, there was no sign of brake fade and the pedal remained firm.

Even though the Mazda3 is more popular in Australia in this segment by around 2:1 (August 2012 sales: Mazda3 2990 vs Golf 1505), the Golf GTD offers that added element of European quality, and it comes with the GTI-inspired performance features.

At first you might think to go for the DSG dual-clutch transmission option. If you can drive a manual, the ‘stick shift’ is definitely an option worth considering. The manual transmission is regarded as being more reliable and more robust for the long-term, and it’s also the more fuel-efficient option. Above all though, it goes well with the GTD’s sporty nature.

If you’re after a vehicle that is quick and properly sporty, has plenty of pedigree, and is highly refined and fuel efficient, we can’t think of many cars that outshine the GTD in this segment. 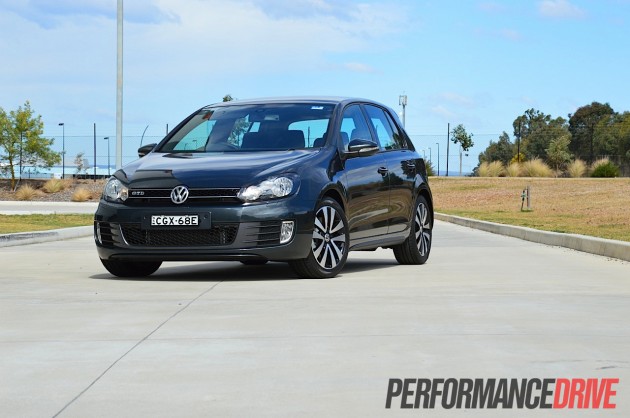