After crashing out in Saturday’s race, Will Davison and Mika Salo have taken out the second and final race of the V8 Supercars Gold Coast 600 in the FPR Ford Falcon. 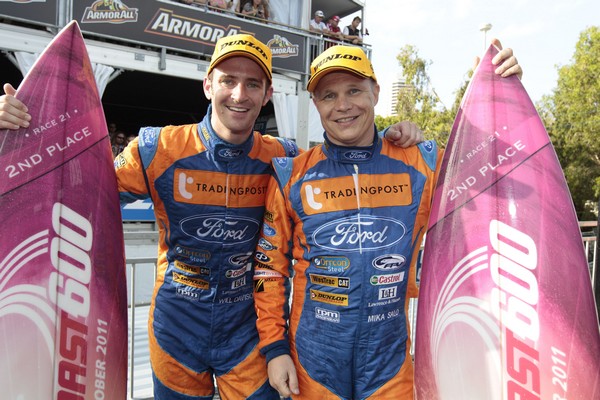 A pit stop for tyres on lap 13 was the race-changing call for the Ford Performance Racing number six car. Salo had fell down the order after starting from the second row of the grid, but a safety car provided an opportunity to gamble on an early stop.

Yesterday’s winner – TeamVodafone Hoden driver Jamie Whincup – had his headlights in the rear vision mirror of his Ford rival in the closing stages. but Davison held on for the win.

“I was just focussing on getting through the opening lap of my stint,” Davison admitted.

“I had a good, hard look at myself last night and I really need to learn about how to string two days together because we have had so much speed and nothing to show.

“Mika did a superb job with that opening stint and all the FPR boys were superb. It feels great.”

It was a case of deja vu for Mark Winterbottom who charged from behind in the other FPR Ford, getting himself and co-driver Will Power their second podium of the weekend.

After a hectic race one on Saturday which saw two race restarts, the safety car was used five times while 20 of the 25 starters finished the race, 17 on the lead lap.

Jamie Whincup extended his championship lead over Mark Winterbottom to over 200 points.

The next round of the V8 Supercars will take place in Abu Dhabi in two weeks.