Late last month Porsche announced that its upcoming supercar, the Porsche 918 Spyder, lapped the famous Nurburgring in Germany in 7:14. The company has now released an official promo film showcasing the effort. 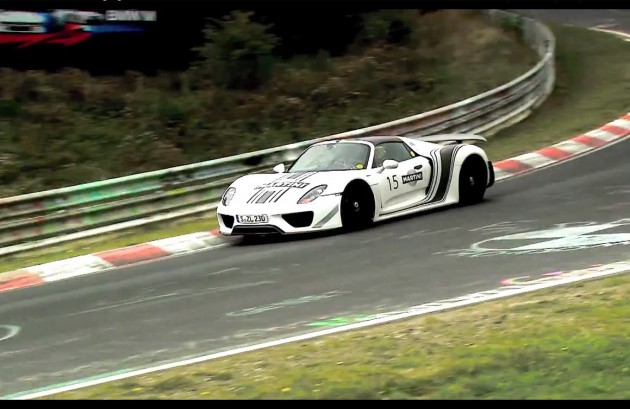 In case you’ve missed the news, Porsche is working on an all-new hypercar which will be a replacement to the epic Carrera GT. Instead of featuring a V10 engine though, the 918 gets a complex hybrid setup with electric motors at each axle, as well as a race-bred 4.6-litre naturally aspirated V8.

The V8 alone is enough to provide proper supercar levels of excitement. Built with a flat-plane crank the V8 can scream to 9000rpm. Power output for the petrol engine is well over 400kW.

As for the electric part of the drivetrain, the 918 can be driven solely on electric power making for a somewhat practical and very economical supercar.

Switch the driving mode into ‘race’ though and the company is saying around 597kW will be unleashed. Acceleration from 0-100km/h is set to come up in under 3.0 seconds, with a top speed of around 325km/h.

Not only will the 918 be fast, it will also handle brilliantly judging by the Nurburgring lap time. Porsche chief test driver and Group B Rally champ Walter Rohrl also speaks high praise of the car, saying that “the way the car handles, how it pulls itself out of the corner is simply surreal”.

The Porsche 918 Spyder will go on sale later in 2013. It’s unknown if the supercar will make it to Australia at this stage.

Click play on the video below for the official appetiser, while below that is a recent part-review by Drive‘s Chris Harris. The review provides some very interesting insights into the intriguingly awesome machine.