Audi and Nokian Tyres have broken the on-ice speed record using a modified Audi RS 6 sedan. The main change made to the car is a set of road-legal Nokian Hakkapeliitta 8 studded tyres (255/35R20 97 T XL). 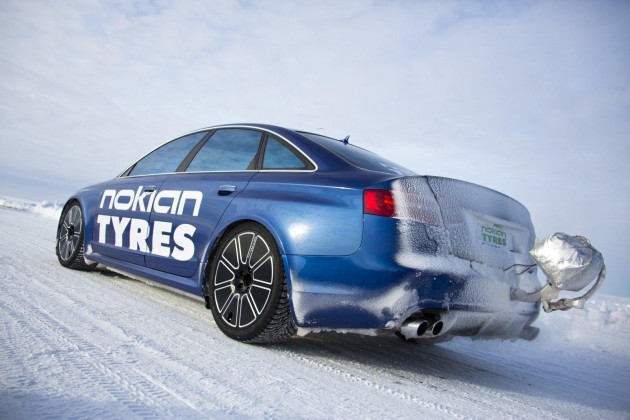 Driven by Janne Laitinen, the RS 6 had to be driven on untreated natural ice for the Guinness Record to be made. Two runs also had to be done, with an average of the two noted down.

Laitinen eventually posted an average speed of 335.713km/h, beating the previous record, also held by Nokian Tyres and an Audi, by just under 5km/h. The previous record stood at 331.610km/h, set in 2011.

Obviously, you need a fairly big and open field of ice to achieve such a record. In this case, the RS 6 was taken to the Gulf of Bothnia in Oulu, Finland, where a special 12km track is made.

Other modifications to the car include a parachute, lowered suspension, and a taped up front end for improved aerodynamics. There’s also special tinted windows to help reflect the very bright ice reflections.

Click play below for a showcase of the record.