You’ve probably heard Audi boasting about its ‘quattro’ all-wheel drive system. But what does it mean for driving enthusiasts exactly? 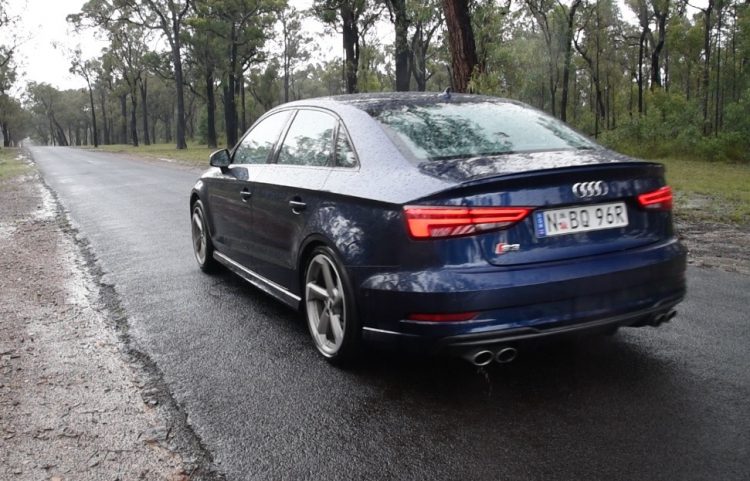 As anyone in Sydney will tell you right now, it’s very wet outside. It’s been raining for almost a week, nonstop. After testing the S3 in these poor conditions, we’ve been amazed by how much grip is on offer, even in terrible conditions.

The S3 uses a permanent all-wheel drive system that distributes engine torque to the front and rear axles via a multi-plate clutch. The clutch is able to respond in milliseconds to adapt to the conditions. Audi says engineers have tweaked the system for the 2017 model as well, to provide “more frequent and pronounced torque distribution to the rear axle”. There’s also an integrated differential lock for added traction.

Getting off the line can be very tricky in two-wheel drive performance cars in the wet. But not in the S3. Using the standard launch control system, accessible in ‘Dynamic’ with the transmission in ’S’, and with the stability control switched completely off, we clocked a super-impressive 0-100km/h time.

We won’t tell you the time, as it’ll spoil the video below, but we will say the result is very close to Audi’s official (dry weather) claim of 4.8 seconds. Achieving such performance in a two-wheel drive vehicle in these conditions just would not have been possible. Take a look below.

We’ll be putting together a full review of the S3 on the website soon and include our usual dry weather 0-100km/h video showcase. Stay tuned.