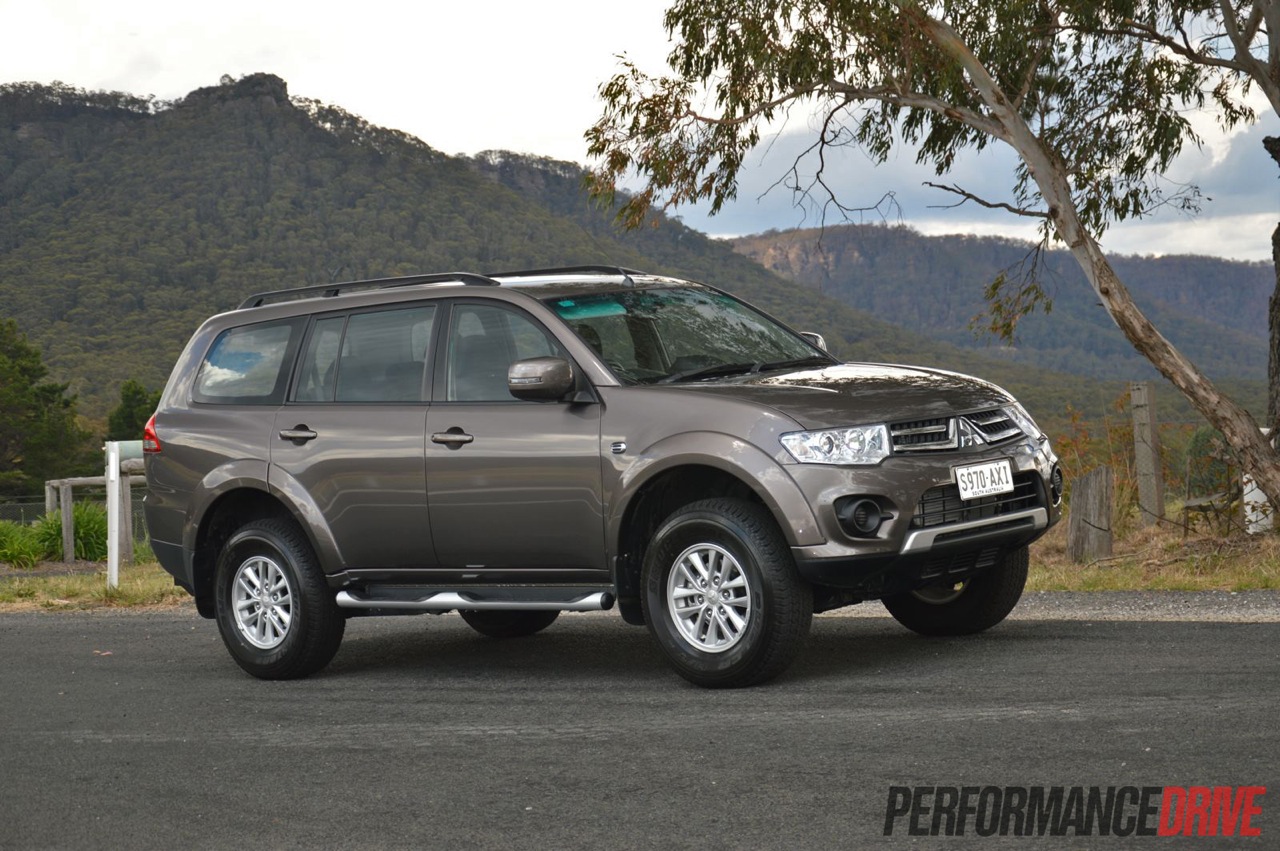 The Mitsubishi Challenger is back for another year. The 2014 model gets a slightly facelifted design, more technology packed inside, and a revised model lineup. 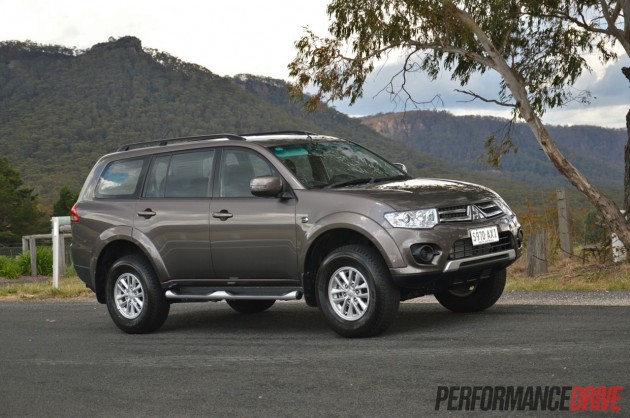 Mitsubishi has simplified the new range and now there are just three variants on offer; the entry-level manual, the auto, and the top-spec LS auto. All three come with the same 2.5-litre turbo-diesel four-cylinder as seen in the 2013 version, producing 131kW and 350Nm (400Nm for the manual), and all showcase the new horizontal front grille layout.

All three are now part-time four-wheel drive as well, as opposed to the 2013 model which was available in rear-wheel drive. Obviously Challenger buyers are interested in using the full potential of the rugged and robust ‘Super Select’ four-wheel drive system.

Prices have shuffled a little bit due to the removal of the RWD version. The base model now starts at $42,490 for the manual and $44,290 for the auto (as tested), while the flagship LS kicks off at $49,990 – there is no XLS variant anymore. 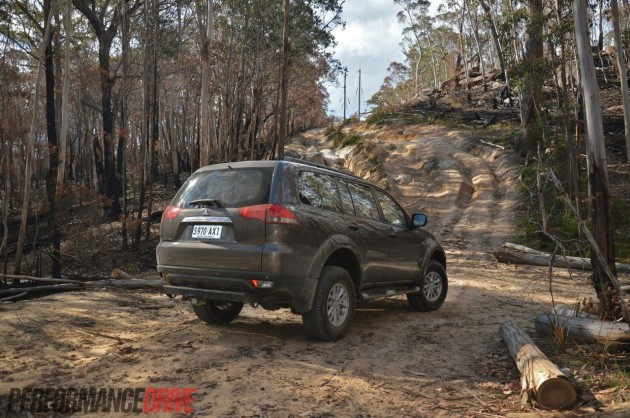 The Challenger is one of those vehicles that’s very easy to drive. You sit perched up quite high, even for an SUV, and all of the controls and dash functions are immediately fathomable. In that regard, it is a fairly routine and somewhat boring cabin.

Cabin space is plentiful for the front and rear passengers, with especially large legroom in the back. In Mitsubishi tradition, the rear seats have reclining functions for added comfort, and they can be folded up and right out of the way for a completely flat and huge cargo area. It measures 1813 litres with the rear seats folded away.

As for standard features, the 2014 model now comes with Mitsubishi’s latest 6.1-inch touch-screen multimedia interface (7.0-inch in the LS) with USB/iPod support and voice recognition. It’s very straight-forward to use, with a simple main menu button taking you to a home page. The screen also doubles as a display for the standard rear-view camera.

While the Challenger makes up for a reasonable family wagon, it’s the mechanical equipment and pure off-road readiness that should be appreciated most here. All models come with something Mitsubishi calls a Super Select 4WD system.

Essentially, it’s a part-time system which can go from 2WD to 4WD at speeds up to 100km/h via the shift of a lever. There’s also centre and rear differential locks and low-range. In other words, it’s as ready to get down and dirty as any other SUV out there. 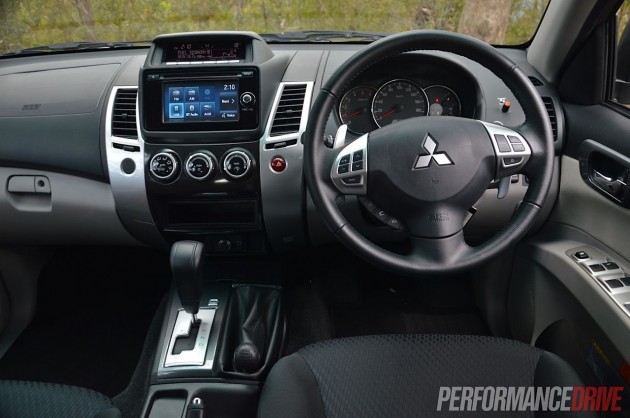 Being so industrial strength, and underpinned by the same platform that forms the Triton commercial vehicle, the Challenger is not what you would call an enthusiastic on-road handler. It has a tendency to lean into corners rather evidently and it doesn’t really like changing direction all too quickly.

Around town, it’s fine. Once you get used to the extensive steering turns from lock to lock, it behaves much like most other serious 4WDs. In that sense, it shouldn’t really be categorised as an SUV (sports utility vehicle). This is a super heavy-duty piece of transport equipment.

The ride is reasonable for suburban run abouts, with front seat passengers experiencing a slightly cushier drive. On the highway or the open road, it easily passes as a comfortable cruiser capable of dispatching hundreds of kilometres.

Speaking of eating up the miles, the 2.5-litre turbo-diesel doesn’t mind a good revving. There is a noticeable powerband from about 2000rpm to 4000rpm, and within this range it pulls strong. It does make a bit of a racket doing it though.

We timed 0-100km/h in 11.6 seconds. Getting off the line is obviously not this vehicle’s forte. Once it’s up to speed that key powerband has no trouble overtaking and heaving along. Probably the main restriction from allowing the engine to perform its best is the five-speed auto. It’s a fairly old unit and doesn’t feel as direct or as refined as some of the transmissions offered in the rivals.

The official fuel economy figures also uncover some facts about the auto’s effect on the engine efficiency; manual 8.3L/100km while the auto is over 1L/100km less economical at 9.8L/100km. Even still, we averaged a pleasing 9.7L/100km during our test – one of the only vehicles where we have actually bettered the official rating. 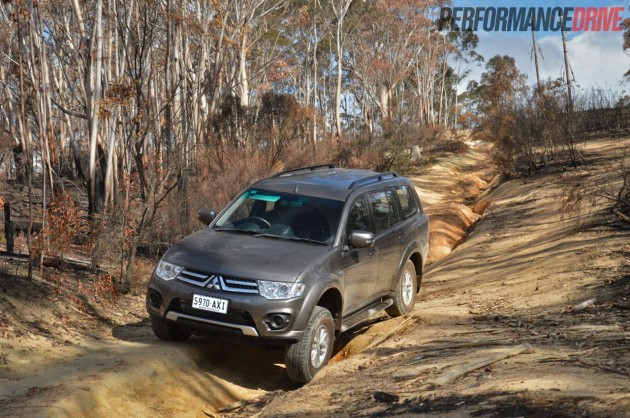 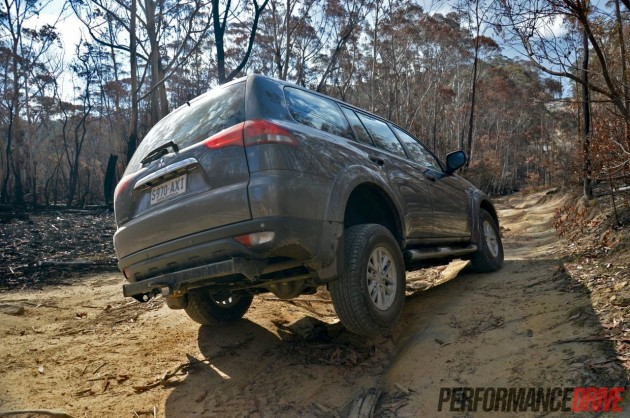 Among the wilderness is really where this vehicle shines. Its ability to devour mountains, rocks, ruts, and thick mud is simply unbelievable. Seriously. During our test we couldn’t count the amount of times we thought to ourselves, ‘hmm, I’m not sure if it will make it up that’. And it just does. So effortlessly.

With the diff locks engaged the Challenger remains as one of the very best 4x4s on the market in our opinion. With a whopping 36-degree approach angle, it takes a sudden mound to snag the heavily protected underbody, and with the 3000kg towing capacity heavy duty tow-bar fitted, the impressive 25-degree departure angle moves any Earth that gets in the way. It’s really impressive.

Other handy figures include a 600mm water crossing depth and a 220mm ground clearance. There’s also huge 70-series tyres which can bend and wrap themselves around small obstacles for maximum traction.

If we had one concern with the Challenger’s off-road ability it would be the narrowness of the vehicle’s footprint. It can feel bobbly in terms of lateral stability. But in the same way a short wheelbase vehicle is better able to clamber over terrain, the width can benefit in a similar manner, especially if you’re venturing along some previously dug out ruts/tyre marks. The front track width of 1520mm is considerably narrower than a Toyota LandCruiser Prado’s track (1585mm), for example. 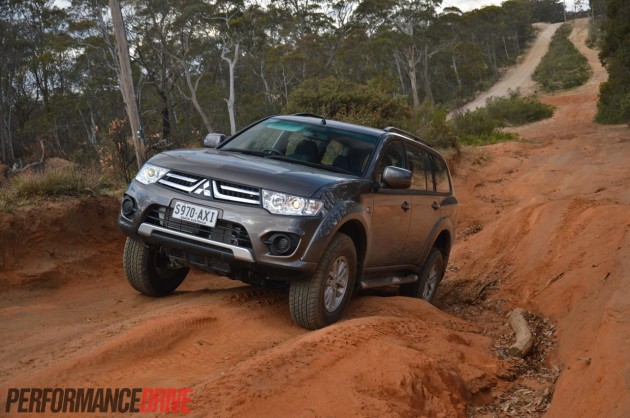 As a family wagon, the Challenger is good. It’s not as nice as some of the more comfort-oriented soft-roaders and SUVs out there as the suspension is too robust and the powertrain is just too heavy-duty. However, if your family enjoys weekend camping trips and adventurous getaways to remote locations – a trip around Australia? – we have no doubt this vehicle will get you there. It’s confident, strong, and very experienced.

With the added technology the 2014 gets and the commendable fuel economy, it’s certainly a vehicle you should look into if you’re in the market for a proper off-roader. The friendly price tag also helps it put up a sturdy fight against its key rivals. 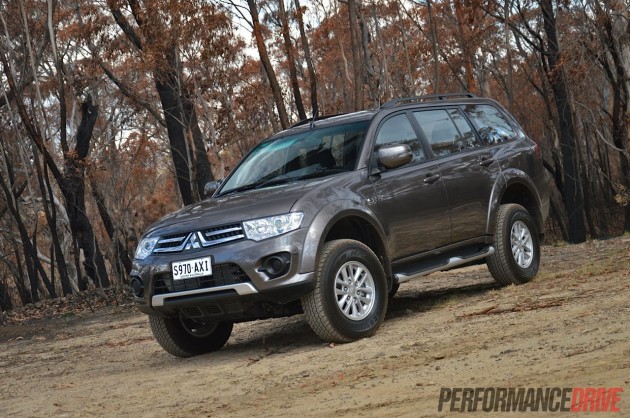