Another spy video has surfaced online of a prototype of the upcoming 2014 BMW M3. This time we get a clear indication of its cracking and bursting exhaust note as it’s tossed around the Nurburgring in Germany. 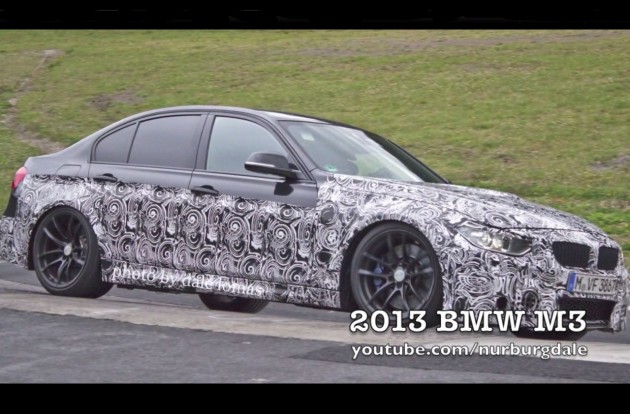 As far as we know, the 2014 BMW M3 will feature a turbocharged straight-six engine, replacing the current naturally aspirated V8. This will make it the first M3 to be turbocharged, following in the footsteps of its bigger brother, the new BMW M5 which has just turned turbocharged.

The engine is expected to be a tuned and revised version of the 3.0-litre unit found in the BMW 1 Series M Coupe. In the 1 M, the engine produces 250kW. In the next M3, power is more likely to add another 100kW to that.

There are reports of the new M3 receiving not just one turbocharger, and not two, but three turbochargers. BMW’s M Division has already developed the technology, and it is now available on the BMW X5 and X6 M50d.

As you can see in the video, the new performance 3 Series will feature some awesomely large brakes, including twin-piston calipers at the front and single-piston items at the back, with huge discs.

This prototype also previews the new bonnet bulge which has become common on the more modern M3s, as well as the quad-outlet exhaust layout.

The new model isn’t set to arrive until next year. A concept version is expected to debut at the 2013 Geneva Motor Show in March, followed by market entry in international markets later that year.