Mercedes-Benz has released an official preview video of the 2013 Mercedes-Benz CLA 45 AMG four-door coupe. The new model is set to come in standard front-wheel drive formats as well as a high performance all-wheel drive AMG model. 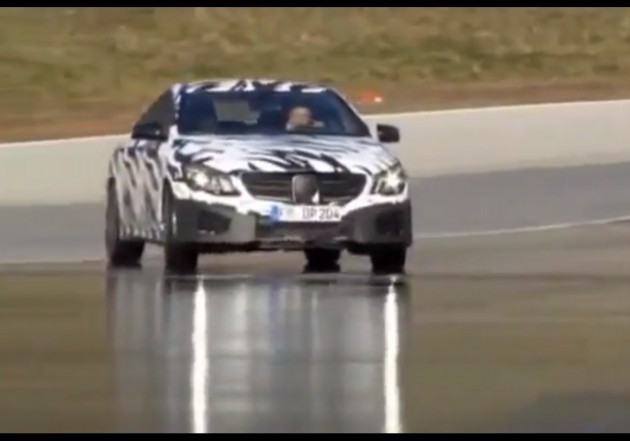 Seen here on a dedicated test track, the prototype showcased is believed to be the CLA 45 AMG version. On the wet surface the AMG shows off its all-wheel drive grip and drifting ability.

Although there is still a lot of camouflaging over the prototype and it’s a bit hard to tell, the CLA-Class will be a sleek new model for the four-door coupe segment. Its closest rival will probably be the Volkswagen Passat CC, which is the only medium-sized four-door coupe-style vehicle on the market at the moment.

The CLA will ride on Mercedes-Benz’s new MFA platform, which also forms the latest B-Class and A-Class. It’s a predominately front-wheel drive architecture that has room for the company’s 4 MATIC all-wheel drive system, as will be used on the CLA 45 AMG and A 45 AMG, and could also be an option on some non-AMG variants.

Powertrain options for the normal CLA-Class are set to mimic those found in the B-Class, ranging from 2.0-litre turbo petrol and turbo diesel four-cylinder units. The AMG is set to come with a 2.0-litre turbo producing around 260kW and 450Nm.

According to international reports, the normal CLA-Class will debut at the Detroit Show next month, starting January 14, before going on sale later in 2013.