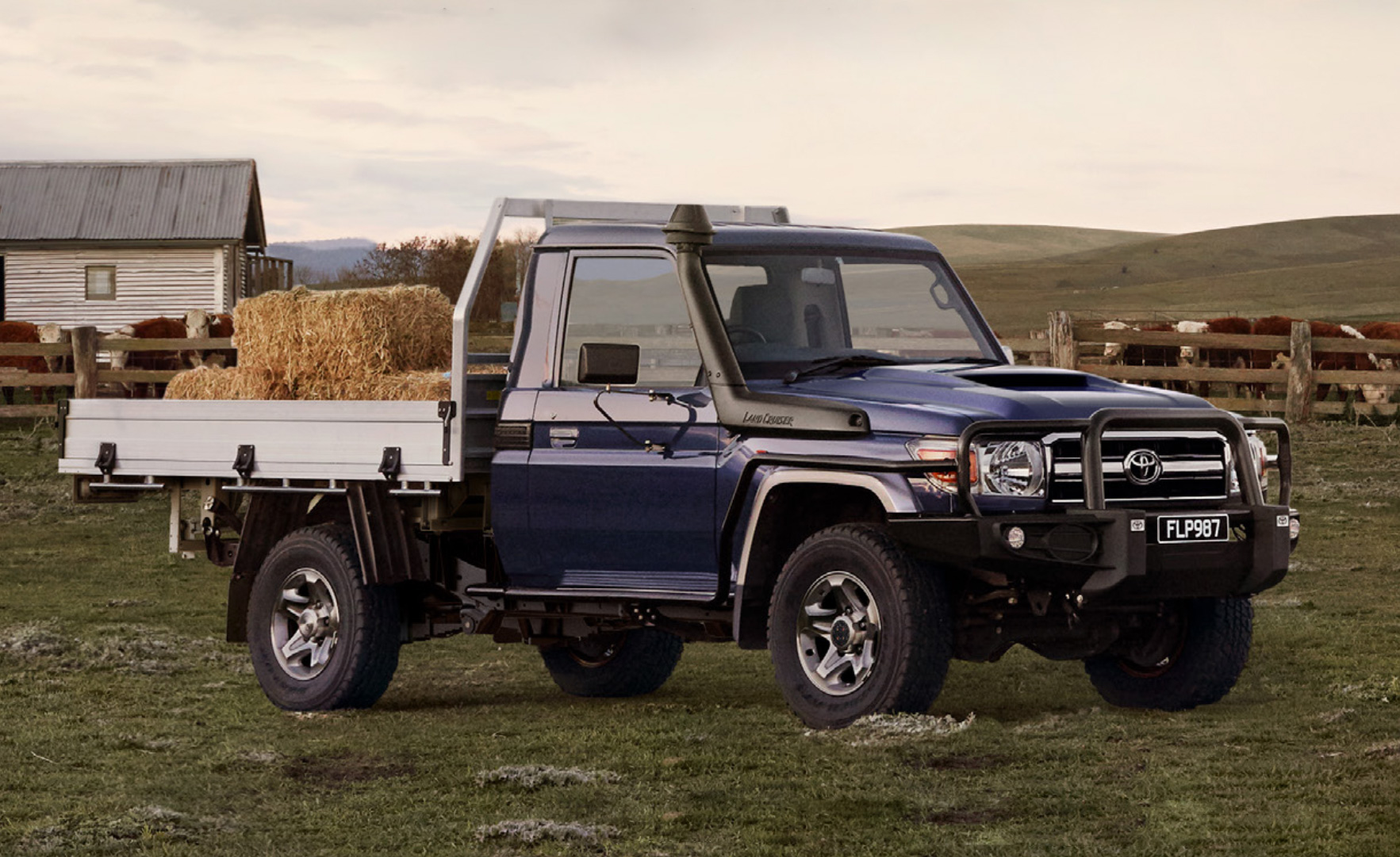 Toyota Australia has unveiled the 2021 update for the trusty 70 Series LandCruiser. It brings in a touch-screen media interface across the board, with added creature comforts now available. 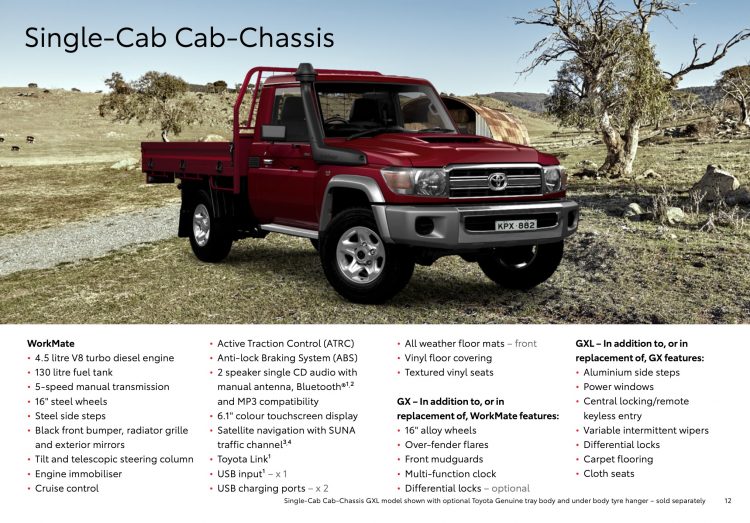 The biggest change for the long-running model line is the introduction of a 6.1-inch touch-screen interface for all models, which was first confirmed in August last year. It includes embedded satellite navigation with SUNA traffic updates, along with Bluetooth connectivity, and Toyota Link smart phone mirroring (with compatible devices).

There’s also two USB ports in the front, a two-speaker stereo for ute and troop-carrier models, and a four-speaker unit for the wagon. A tilt-and-reach steering column adjustment is standard for all, with a collapsible column for safety, and cruise control. 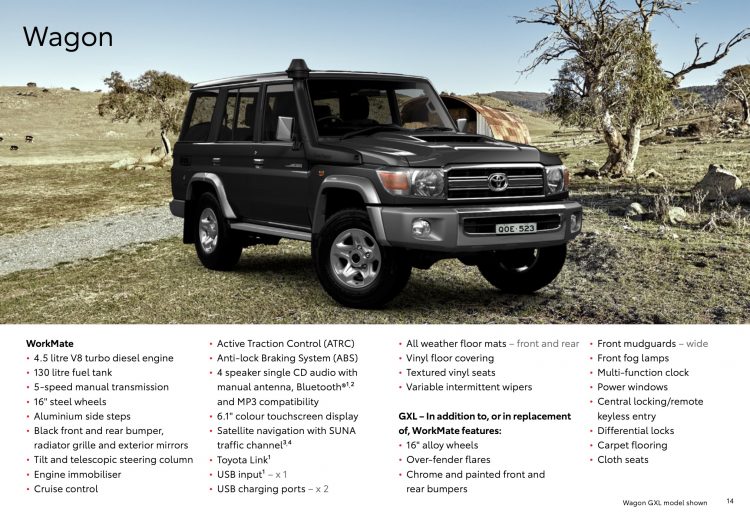 The GX trim for the single-cab drops the carpet and cloth interior for vinyl, and it misses out on power windows, aluminium side steps, central locking, diff locks (although optional), and variable intermittent wipers, but it does come with the 16-inch alloys and wheel arch flares.

In terms of safety tech, the 2021 70 Series includes ABS brakes with multi-piston calipers, side impact beams in the doors, and dual front airbags. Traction control is also standard. ANCAP has given the single-cab 70 Series a five-star safety rating, although it was last tested in 2016. All other body styles are unrated. 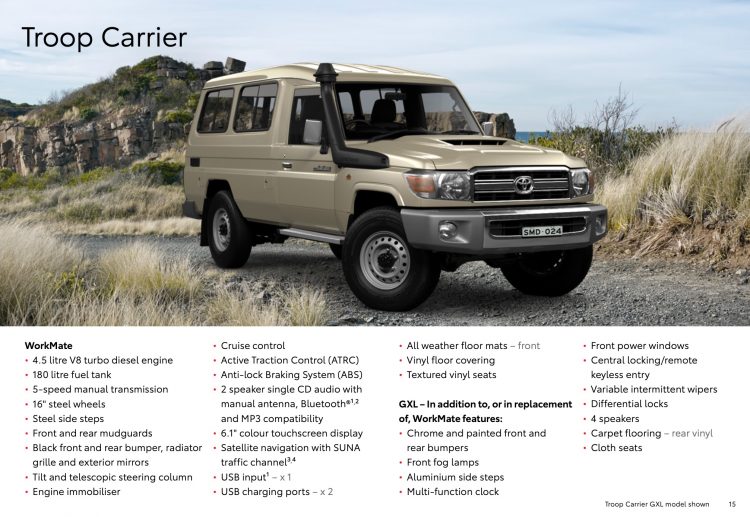 As for the powertrain, the 4.5-litre turbo-diesel V8 carries over unchanged. This is set to be the last diesel V8 in Toyota’s showroom once the 300 Series LandCruiser arrives. It develops 151kW at 3400rpm, and 430Nm between 1200-3200rpm. This is matched to a five-speed manual, with no auto option available.

The engine meets Euro 5 emissions standards and offers an official average consumption of 10.7L/100km. The engine also features an Exhaust Gas Recirculation (EGR) system to reduce emissions, as well as piezo injectors for response and efficiency. 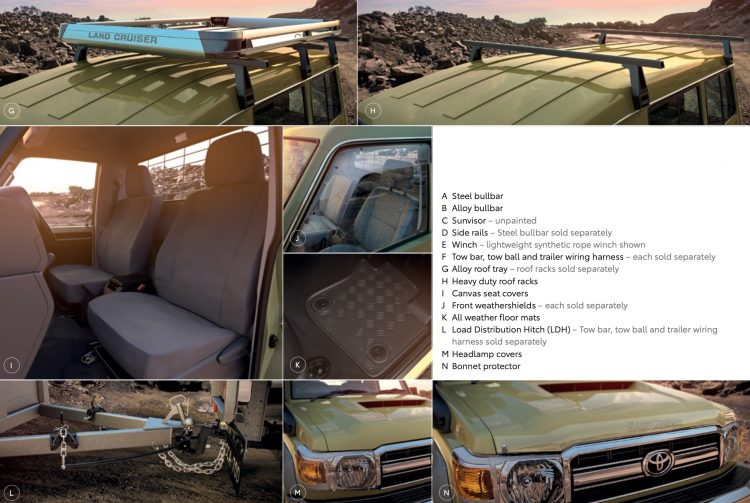 Various genuine accessories are available for the 70 Series, including bull bars (steel and alloy), side rails, tow bar packages, heavy-duty roof racks, headlight covers, and even a winch including a lightweight synthetic rope. Toyota also offers an auxiliary battery kit accessible from the tray with a three-stage charger.

The 2021 70 Series LandCruiser update is covered by a five-year/unlimited kilometre warranty, and Toyota says if the vehicle is serviced and maintained according to the warranty and service book, the company provides an additional two years coverage for the driveline and engine. Capped-priced servicing is also standard. See below for the starting prices (excluding on-road costs):