Remember earlier in the year it was announced a special one-off concept would be made in honour of the late Sergio Pininfarina? An early design sketch of that concept has now been released. 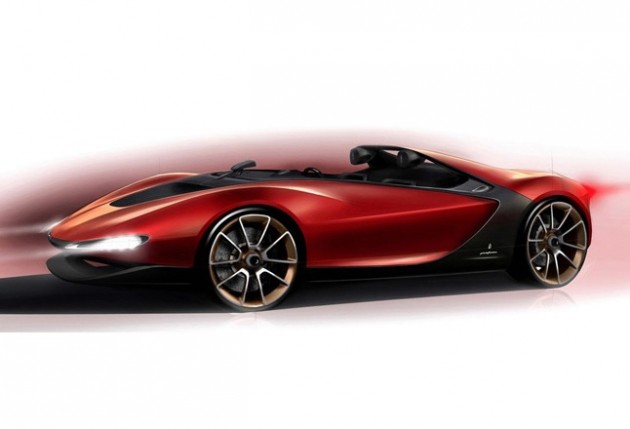 The finished product will be on display at the 2013 Geneva Motor Show starting Tuesday, March 5. As you can see it will be an extremely low profile and quite dramatic open-top two-seat roadster.

You may notice there is no windscreen or side windows, which gives the car a very sharp, low, and flat character. The rear spoiler also servers as some roll over protection, while the curvy wheel arches and a contrasting dark red and carbon grey colour scheme accentuate the car’s aggressive lines.

It’s unknown at this stage what powers the exotic creation. Regardless of what engine it gets, the concept certainly looks fast simply standing still. Sergio, who passed away during the middle of 2012, would be pleased. The remaining design firm recently said,

“This concept car renews the spirit and the values of the extraordinary achievements born under the leadership of Sergio Pininfarina, projecting them into the future in the name of exclusivity, innovation and passion.”

For those who haven’t heard of Pininfarina, chances are, you may know some of his work without even knowing it, particularly his involvement with Ferrari.

Pininfarina was behind the designs of loads of iconic vehicles, including the Ferrari F40, Testarossa, F355, the Ferrari Enzo, as well as the original Alfa Romeo 8C from 1933, and the Lancia Montecarlo.

The complete concept is likely to be a standout and main attraction at Geneva this week. We’ll be sure to provide additional details as soon as we can.