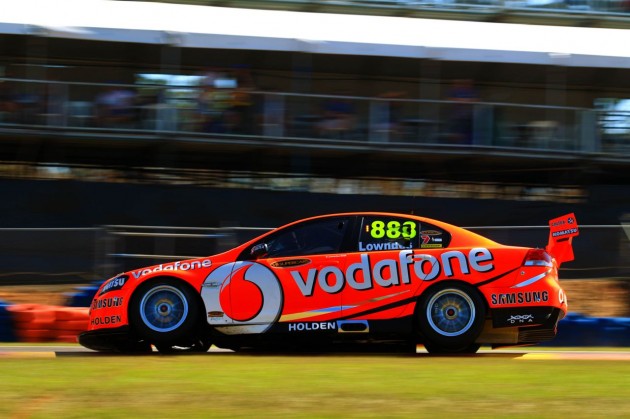 After Whincup took out the first race yesterday, Lowndes got one back on his reigning champion teammate, passing him for the lead with three laps to go.

Whincup now leads the championship, ahead of Will Davison, with Winterbottom not far behind.

Lowndes said his race win was down to his engineer making the right call on pit strategy.

“They wanted me to stay out just enough to split up the next two runs and it was a credit to them. I was thankful at the end that the car looked after its tyres. At the end of the middle leg it felt like it was on the canvas but that last set was great,” Lowndes said.

“Our concerns were making sure we didn’t have a late safety car because we would not have had anything left to fight with. Vodafone have had a 1-2 and we have worked very hard to make sure that’s the case.”

It was an all-FPR front row with Will Davison on pole ahead of Winterbottom. Davison got the jump at the start but some heart-in-the-mouth panel running on lap two saw Winterbottom take the lead. But after pitstops, TeamVodafone came out on top with newer tyres late in the race.

Nevertheless, Winterbottom said he was pleased with his podium finish.

“The car was definitely hard work in that last stint but we had flashes of speed,” Winterbottom said post race. “I was good on the hard tyre and then had a massive gap to everyone until we changed the strategy to go onto the softs.

“It was a great call and one we had planned but each set of tyres from then on was inconsistent. The second set was fine, the next was very good and the final set was a long way off the pace so we will have to look into that and see what happened. That aside, third on a day where we are struggling is a good result.”

Team Fujitsu Holden driver Michael Caruso was the best of the non-FPR and non-TeamVodafone in fourth while Brad Jones Racing’s Fabian Coulthard was fifth.