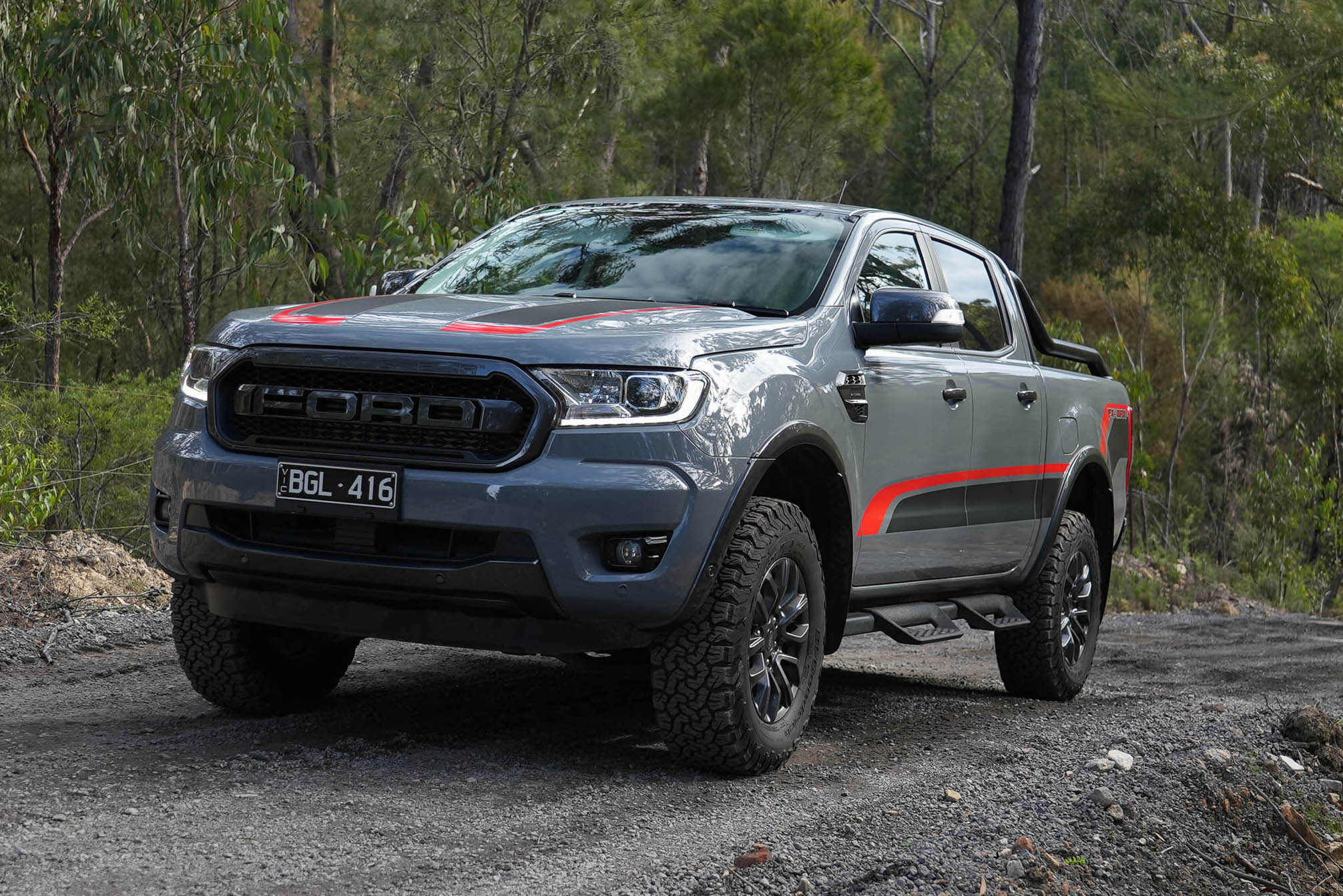 Machoism and testosterone, to the max. The 2021 Ford Ranger FX4 Max is the ultimate expression of everything manly and outdoorsy. It’s also the ultimate intimidator on the highway. 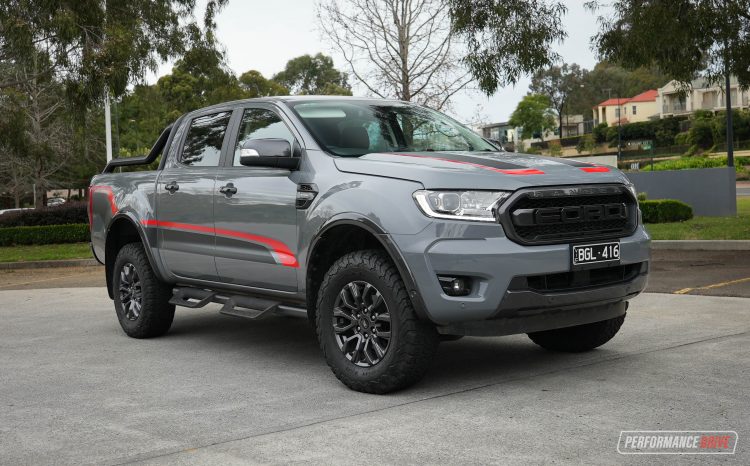 It probably sounds like we’re having a dig at the FX4. And we are, kind of. But this stuff clearly appeals to lots of people. And lots of buyers. Otherwise Ford – and other ute-makers – wouldn’t bother creating these extra-rugged iterations.

The FX4 Max is essentially a narrow-, or regular-body version of the Ranger Raptor. Same mud-ripping tyres, same Fox suspension, and the same go-anywhere attitude. However, this is about $11,000 more affordable, starting from $66,190 (excluding on-roads). If size matters to you, then you’ll be happy to pay to get that extra 51mm… in width. 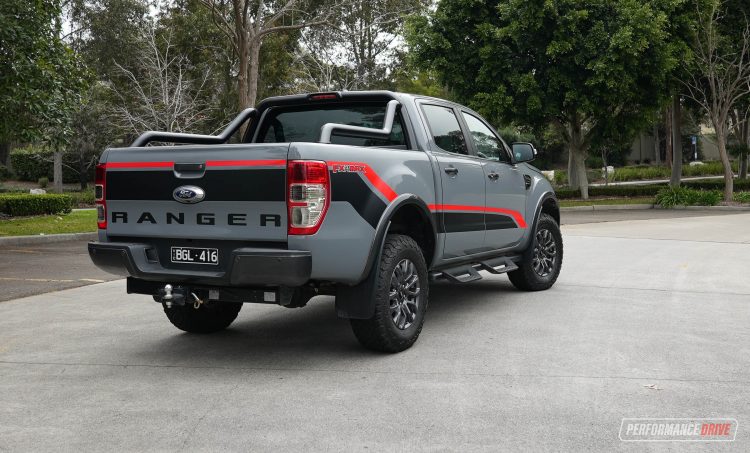 With the FX4 Max package you get all of the usual stuff you’d expect on an upper-range dual-cab 4×4 ute, only this is garnished with plenty of go-muddier bits and pieces. For example, you’ll find 2.0-inch monotube Fox shocks front and rear, with specially-tuned coil springs at the front, and opposing mounting points for the shocks at the rear with their own remote reservoirs to manage loads.

A set of bespoke 17-inch alloy wheels are wrapped in BF Goodrich 265/70 all-terrain tyres. These are shared with those on the Ranger Raptor, offering proper grip in the mud, and they feature toughened sidewalls to reduce the chances of a puncture. Along with the suspension changes, the bellowing tyres help to raise the ground clearance by 19mm over the regular XLT variant. So now the lowest clearance, at the rear diff, is an impressive 256mm. 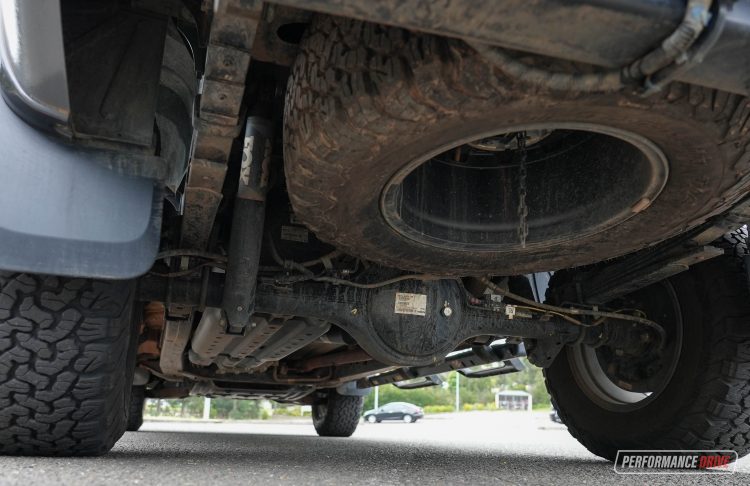 Inside, Ford has provided a few frilly decorations specific to the FX4, including specially-trimmed seats with leather and Miko suede, contrast stitching, and this test vehicle shows off the mucky-boot-friendly thick, fully-moulded rubber floor mats. Other than that it is pretty much the regular Ranger in here.

We think the decor is starting to age a bit now. Some of the chrome trimmings look a bit cheap and old, and the switchgear can seem crude compared with more modern rivals. The semi-digital instrument cluster could do with a graphical update as well. Fortunately, there is an all-new model just around the corner. 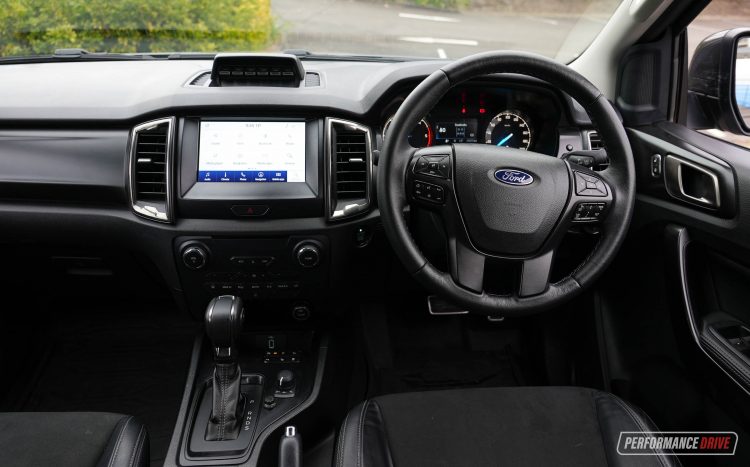 The best aspect to the interior for us is the driving position and passenger convenience, compared with some rivals. Tilt and reach steering column adjustment and a wide range of seat movement means you can set yourself up as if you’re in a car, or at least SUV. It doesn’t feel like you’re sitting in a truck.

Rear passengers are treated to similar trim for the seats, and there is a flip down arm rest, charging ports, and very good legroom and headroom. It’s a shame there are no climate vents, though. There is a decent door opening gap, and thanks to the convenient (and very pointy) side steps, it’s pretty easy to get in and out of. 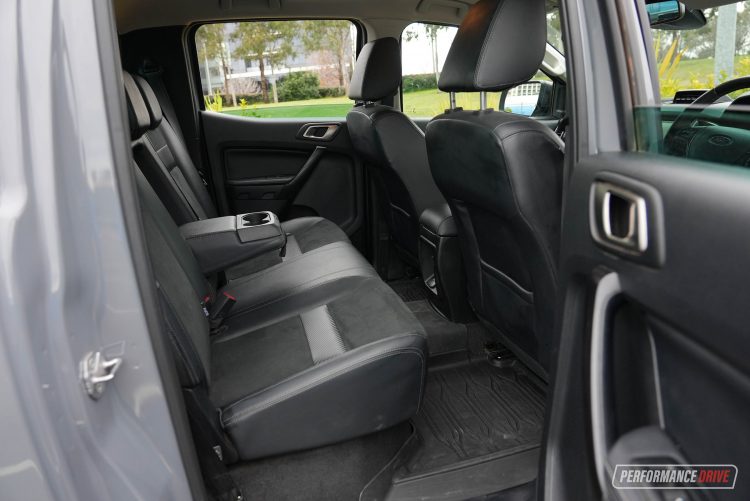 Payload capacity is just under one tonne (981kg), and this example shows off the robust tub-liner. The braked towing capacity is at the maximum 3500kg. However, with a gross combination mass of 6000kg, minus the 2219kg kerb weight, you’re only left with 281kg for passengers (and driver) and any extra gear if you do tow 3500kg.

It’s not much. Though, that leftover figure is at the upper end of the class. This example also shows off the racy FX4 Max decal set, which costs an extra $750, and the body is coated in the $650 Conquer grey paint option. 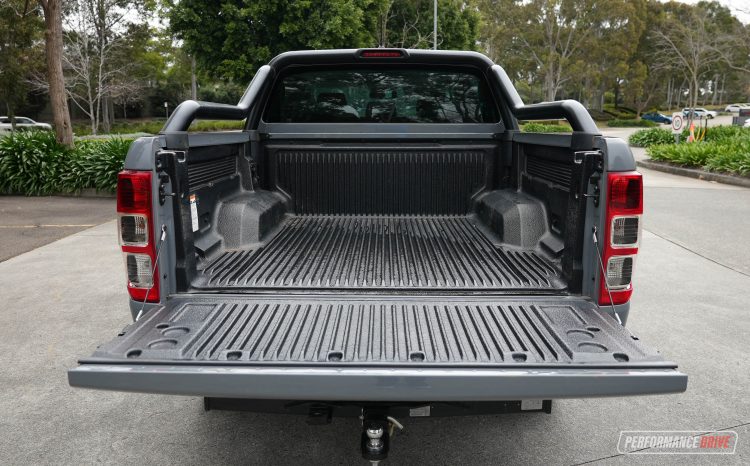 It’s good to know all of the suspension and tyre mods have been tested and tuned in Australia, including at Ford’s You Yangs providing ground in Victoria. And it shows. The ride comfort is genuinely impressive for a leaf-sprung rear end, particularly against some of the market rivals which offer an annoyingly bouncy feel. Keep in mind that’s without a load in the back. Those big tyres probably contribute a degree of additional absorption as well.

Looking at this thing, you’d expect it to handling like a truck. But it really doesn’t. We threw this example down our usual windy mountain road and it proved to be quite the athlete. Body roll is really well-managed, and you can actually poke it into tight corners without much complaint from the steering or tyres. In the wet, the tyres struggle a bit as it can scamper for traction pulling away from roundabouts. 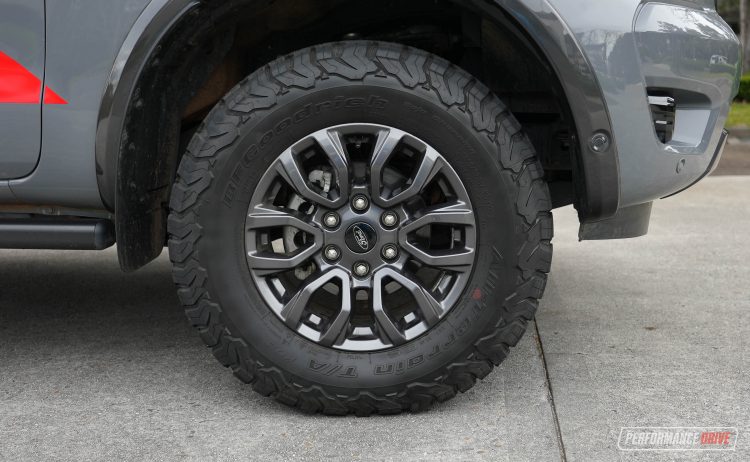 It’s also surprisingly friendly when zipping about in town. Aside from the massive 5.4-metre length to consider, it doesn’t take long to feel confident in knowing where the corners are positioned, and where the wheels are placed on the road. At this level of the segment’s evolution, we’d expect surround-view cameras by now to help out in this department. They’d help off road, too. Here you only get a straight-forward rear-view camera.

As for the powertrain, well, when the 2.0-litre twin-turbo diesel was first released there were lots of Ranger loyalists angry about losing a cylinder and dropping down to a 2.0-litre size. But regardless of any connotations to ‘size matters’ and all of that, this produces a class-leading (for a four-cylinder) 157kW, which is 10kW more than the 3.2 five-pot. There’s also 500Nm of torque, which, again, is more than what the 3.2 offers (470Nm). 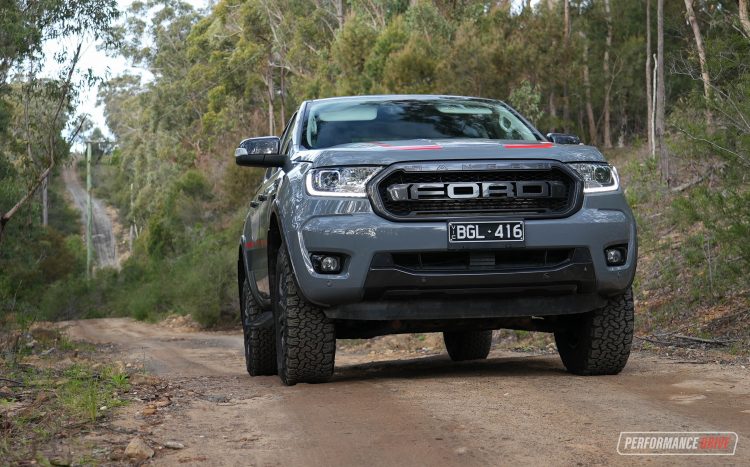 We’re still on the fence regarding this 10-speed auto. Yes, it does change gear quite a lot and yes it can, at times, sound and feel like a CVT. But on the other hand it always has a ratio for any given situation. So you’re pretty much never left waiting and wanting more from the engine. Overtaking performance is good, and it cruises nicely on the highway. It’ll also get off the line quickly. If you simply watch the speedo, you’ll be impressed. But if you listen to all of the gear changes happening as it gets up to highway speed, you might be wondering what on earth is going on.

We have tested this relatively new engine before for 0-100km/h. However, during this test saw quicker results. Quicker than what the Wildtrak achieved when we tested it last year, with the same powertrain (9.36 seconds). This FX4 achieved the sprint in 9.20 seconds. Maybe the bigger tyres provide longer gearing? It seems the FX4 Max is slightly lighter than the Wildtrak as well (by only 27kg). 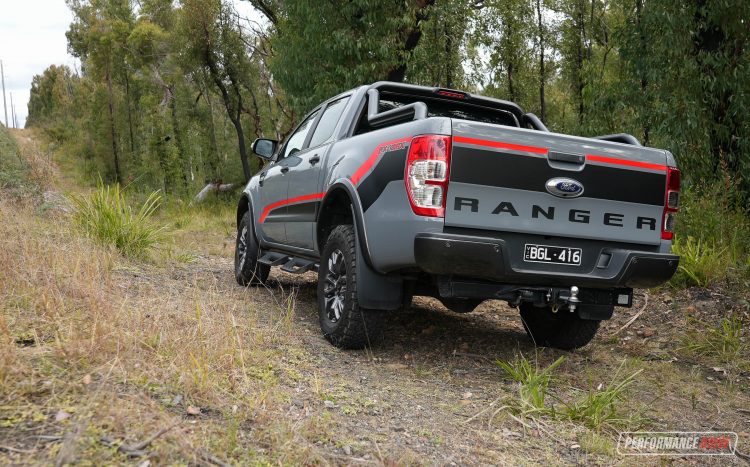 Off road, it’s such a beast. You get the sense it can go over anything. So much so that it can make you feel almost over-confident. Like on the road, the ride comfort is a real standout on the dirt. The tall tyres probably help.

The FX4 Max does come with low-range of course, and there’s a locking rear differential. About the only area that lets it down in the bush is its sheer size. It doesn’t offer the technical nimbleness of a Suzuki Jimny, in other words. But neither do any of the competitors.

Look, aside from the ridiculousness of it all, the Ranger is one of the best-sellers in the class for good reason. It drives like a decent-handling SUV, the seating position and passenger comfort is really good, and the engine is the most powerful in its class yet also respectably fuel efficient (for a 2200kg vehicle) – the official average is 8.0L/100km and we averaged 9.7L/100km.

Do you need the FX4 Max and all of its encouraging add-ons? Probably not. The tyres are dearer and they’re likely to cause fuel consumption to increase, especially over time – and braking performance suffers. But you know what, it’s fun and adventurous, and it looks cool. And all of that tends to rub off on you; you find yourself being more fun and adventurous in general, simply to match the car’s attitude. We like it.

PROS:
– One of the toughest-looking utes out there?
– 2.0TTD engine offers class-leading power and decent economy
– Fox suspension provides good ride comfort
– Handles and drives like an SUV, most of the time
– Saves you $11k over the almost-identical Raptor

CONS:
– Big tyres can be expensive, impact fuel economy/road noise/braking performance
– Interior is getting a bit old now
– Pointy side steps are not shin-friendly