A scuffle between Toyota driver Anthony Davidson and Ferrari 458 driver Piergiuseppe Perrazini has resulted in a spectacular crash at the 2012 Le Mans 24 Hours in France. Davidson has since been diagnosed with a broken back. 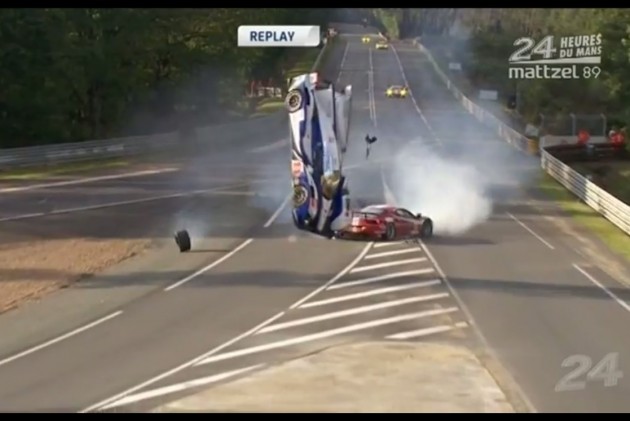 After clipping the Ferrari, Davidson in the Toyota LMP1 hybrid spun 360 degrees, flipping in the air at the approach to Mulsanne Corner. The two cars then slammed into the tyre barrier at the end of the straight.

Davidson and Piergiuseppe stepped out of their cars, however, after reporting back pains, Davidson was taken to hospital and was diagnosed with two fractured vertebrae. The Briton recently tweeted,

“Well that was a big one! Lying in a French hospital with a broken back wasn’t what I had in mind at this stage in the race.”

Davidson will remain in hospital until at least Monday.

Click play on the video below for a look at the huge Toyota Le Mans crash.

At the timing of writing, there were 2 hours, 30 minutes left in the race, with two Audi R18 E-Tron LMP1s in the lead. Look forward to PerformanceDrive‘s full report on the results after the race.