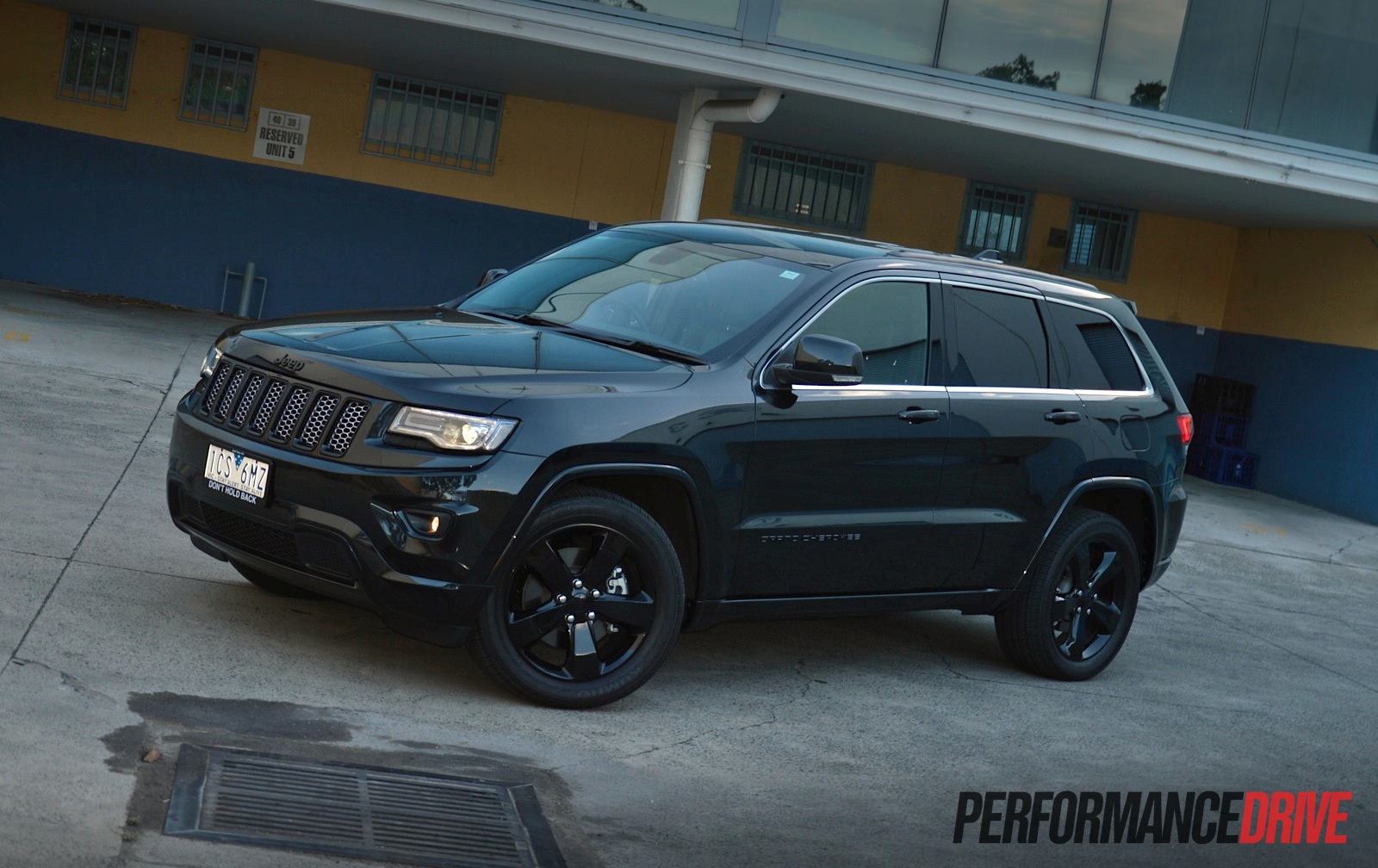 The latest-gen Jeep Grand Cherokee is easily the most popular Jeep on sale at the moment. It’s also the most popular-selling vehicle in the highly competitive segment in Australia. But the question remains, should you buy one? 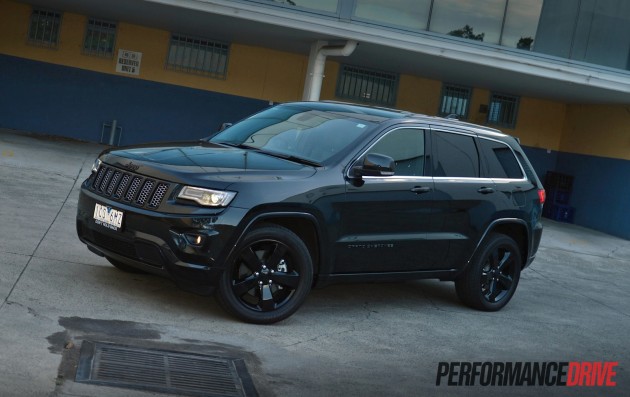 Well, let’s break it down a bit. What is appealing about the GC? At the moment the local brand is offering a sinister Blackhawk edition, which is what we’re taking for a quick drive here. You’ve heard of ‘black’ special editions before? This is as black as they come. Everything is black; black 20-inch wheels, black window trimmings, black grilles, and black badges. It’s all very cool, but the truth is even the regular models have a certain road presence about them. It’s a kind of a mix between muscle car and modern SUV.

Under the bonnet you have a number options, including a 3.6-litre naturally aspirated V6 petrol producing 210kW and 347Nm, or a 3.0-litre turbo-diesel V6 developing 184kW and 570Nm. You would have to be mad to go for the petrol. The diesel feels smoother, it offers bags more torque, and it just gets on with the job so much better. In fact, it’s one of our favourite diesel engines in that it’s just so effective at hauling ass on the highway and returning good fuel economy in the city. Officially, the petrol uses 10.4L/100km while the diesel sips 7.5L/100km on the combined cycle. It’s a no-brainer. 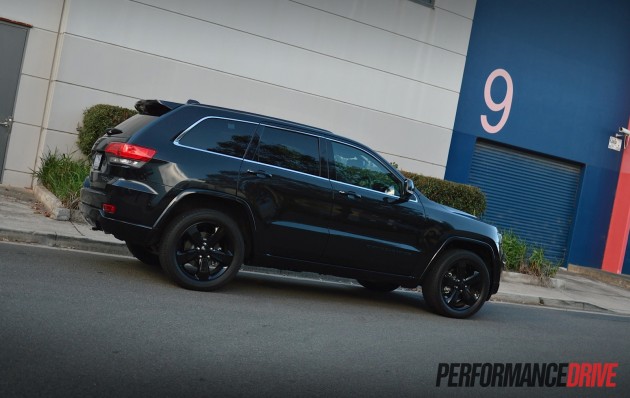 If none of these units tickles your fancy there’s always the SRT monster. It comes with an almost comical 6.4-litre HEMI V8. It’s a proper muscle car engine, thumping and thundering under full throttle, and rumbling deeply on the overrun. What a fantastic beast. As we’ve said in our reviews, this, in our opinion, is a vehicle that won’t be around for much longer so we need to celebrate and enjoy outrageous machines like these while they last.

All engines come with a ZF eight-speed automatic transmission, backed up by a reasonably capable all-wheel drive system with selectable driving modes. Okay, so that’s the powertrains covered. There’s something for everybody and all but the V6 petrol are extremely appealing, and compare well to the market rivals in terms of efficiency and/or performance.

Now for the packaging. The cabin is big. It’s a big vehicle so the five seats really are five seats; it’ll take five adults anywhere you need to go, and in comfort. The driving position is high, which, let’s face it, that’s what everyone wants these days, and the ergonomics are practical, uncluttered, and rather relaxing. The dash sits almost square-on, ideally, and all of the major/most-used controls are easy to reach. Cargo space is like the rest of the vehicle too. Sure, the loading deck is high but the floor is flat and wide.

Now for the pièce de résistance; an 8.4-inch Uconnect touch-screen interface. This is one of the best systems on the market we think, even better than some higher-end offerings. With clear graphics, easily navigable menus, and a good list of standard apps and functions, you could spend quite some time just having a play with it all. 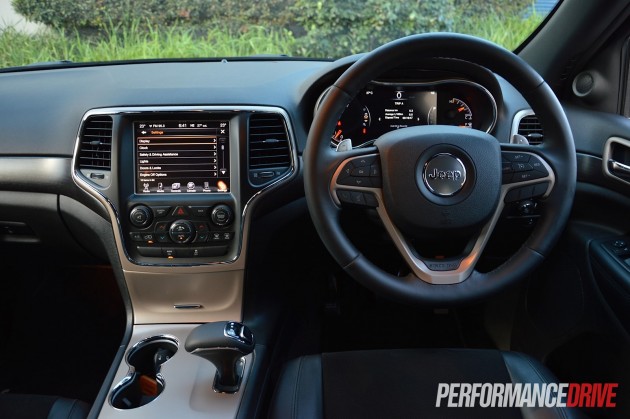 On to the negatives. What’s not appealing? Not much, actually. Except the petrol V6 as mentioned. The gear selector can be a bit fidgety at times, and there’s no seven-seat option. Oh, we’ve been stuck in the sand before despite having it in the ‘sand’ driving mode which didn’t seem to do anything. In other words, there are more heavy-duty off-roaders in this space. The only other area to consider is long-term reliability. Jeep, or Fiat-Chrysler for that matter, doesn’t have the best track record but it has certainly come a long way in recent years. We’ll leave you to be the judge of longevity though, as we usually only test drive vehicles for one week.

So, what’s the answer? Should you? The main thing to consider is the competition. It’s got some fierce rivals. The Toyota Prado is excellent at being a 4×4 but not quite as complete as a family car, and the Ford Territory is built by a brand that is closing down (enough said?), meanwhile the Nissan Pathfinder has gone too car-like. Until Toyota finally jumps onto the diesel bandwagon and offers an oil-burner for the Kluger, this leaves only one choice as far as we’re concerned. The loveable, macho, (mostly) heavy-duty, and surprisingly economical Jeep Grand Cherokee. Our pick is the diesel, or for real SUV performance you can’t go past the 6.4 HEMI.