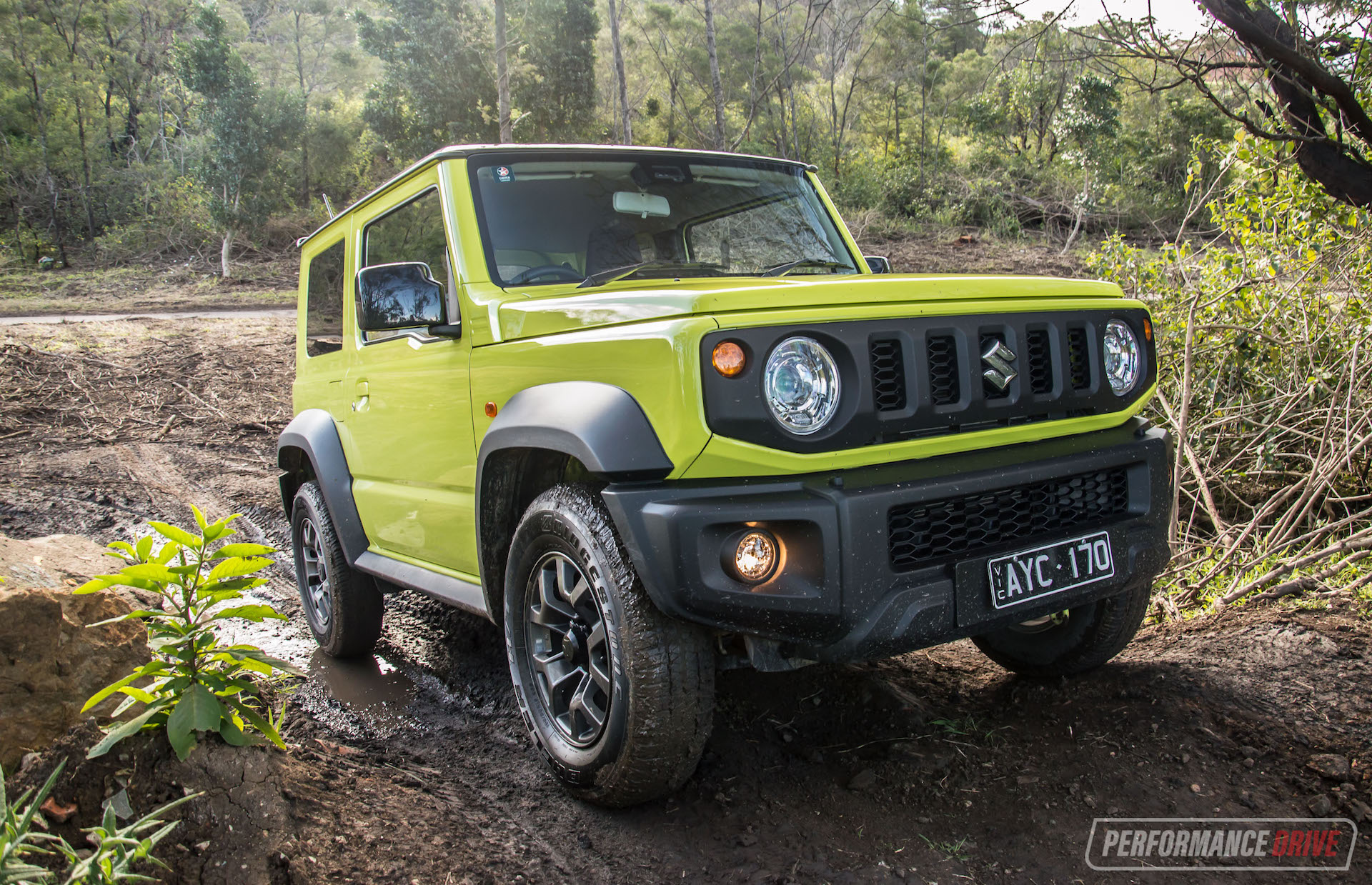 In a wonderful world full of technology and gizmos, sometimes it’s nice to get back to basics. We’re not talking about turning into naturists, we’re talking about the 2020 Suzuki Jimny. 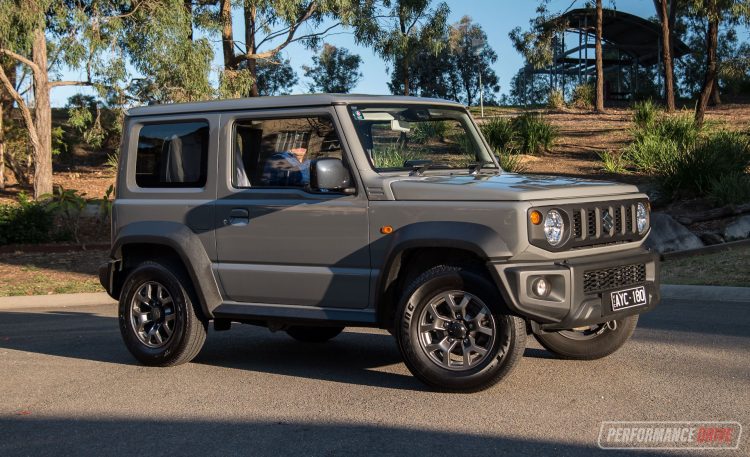 The primitive, pint-sized four-wheel drive is back in it’s fourth-generation, still looking very familiar for Jimny fans with its boxy design and off-road abilities. There aren’t many vehicles quite like it; daring enough to be content with a three-star ANCAP safety rating, and one of the least powerful vehicles on the market. But it’s all in the name of fun, dependability and excellent off-road capability.

Following our first drive early last year, we though we’d see how the exciting little SUV shapes up now. To refresh your memory, the engine has grown from 1.3 to 1.5 litres since the previous generation. It now squeezes out 75kW of power and 130Nm of torque via a choice of a five-speed manual or four-speed auto transmission. Both options are granted with a low-range transfer case for those proper off-road adventures.

There are no fancy badges or variants to pick from, just the choice of gearbox and some cool colours. Here we’re going to compare both transmissions to help you decide which one will suit you best. Prices start from $25,990 for the manual, and from $27,990 for the auto (plus on-road costs). These figures have gone up a bit from the original $23,990 starting price last year.

* Figures as tested by PerformanceDrive on the day, based on a 2019 model. Factory claims may be different 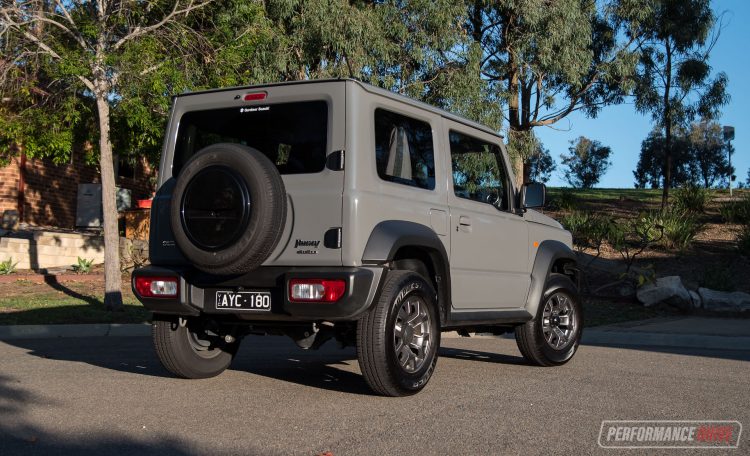 Largely being in a league of its own, the Suzuki Jimny is a small four-wheel drive, strictly designed for heavy-duty off-roading, with dash of inner-city appeal thanks to its petite size and brilliant fuel economy. If you expect glamour (although, it does look very cool), luxurious comfort and sportscar-like handling, the Jimny is not designed for you.

With that in mind, the interior is not flashy. But it’s not trying to be. You’ll see durable plastics, raw Allen screws to fasten components (brought through from previous models), and cloth seats for that robust and rugged feel. You might feel some nostalgia from the retro orange glow from the interior lights and instrument cluster, as seen in early model Suzukis. 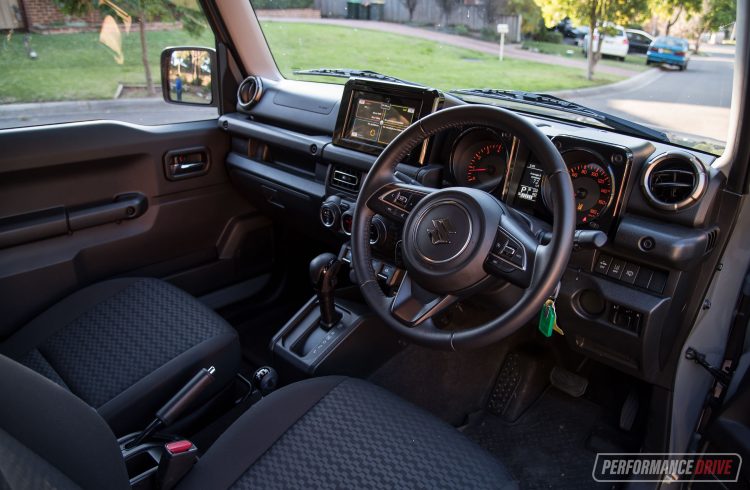 The exterior looks funky and neat with its simplistic and boxy shape. It keeps old-school design elements like flat panelling, round headlights, a side-hinged tailgate, and a vertical front grille. The unique design (but familiar to Jimny) conveys a strong and nimble 4WD, amplified by its tiny wheelbase and almost non-existent front and rear overhangs. Those round LED headlights are beautifully bright, perfect for rummaging through the thick bush in the dead of night.

The seats are small but soft, which helps to absorb a bumpy ride. They’re situated to provide good headroom and legroom in the front, and the seating position is high for easy vision around your perimeter. Rear passengers have more room than you would expect when glancing from the outside. Though, it’s tough for full-sized bodies to climb in and out. 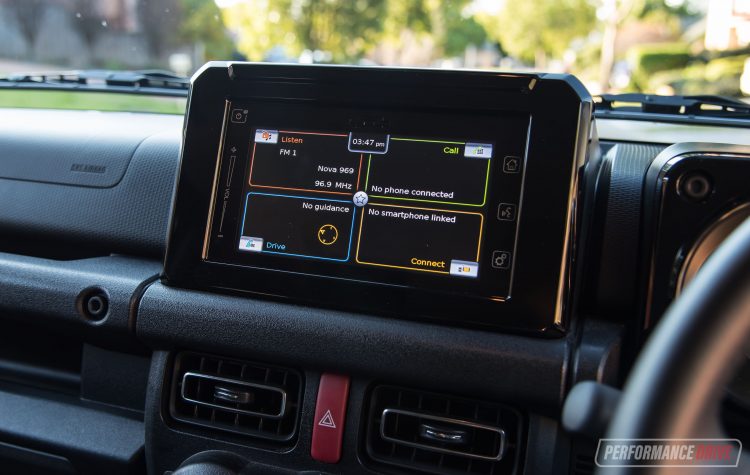 Suzuki’s 7.0-inch touch-screen media interface packs in everything you could need, and it’s simple to use. Apple CarPlay and Android Auto, and sat-nav are standard. But so is a woeful two-speaker sound system. It crackles and distorts when you use it at 100km/h as you try to fight the road noise. But seriously, how much are speakers these days? Surely Suzuki could throw in an extra two.

You won’t see many Jimnys used as an uber car, as boot space is limited to just 75 litres. But that’s okay as it’s not designed for drivers who need luggage space. And if you need more space, folding the rear seats down will open up 830 litres. The backs of the rear seats are finished in chequerplate-like durable plastic, and they fold down flush with the rear wheel arch covers for a flat loading bed. 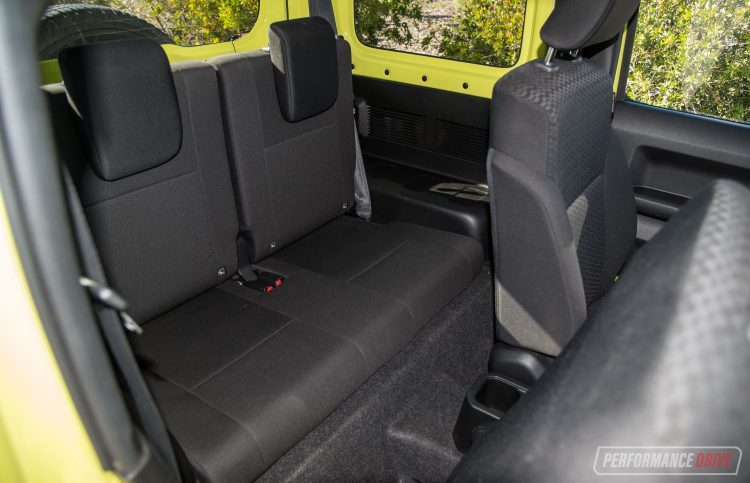 The Jimny comes with a generous five-year, unlimited kilometre warranty, capped-price servicing, and servicing is required every 15,000km or 12 months. 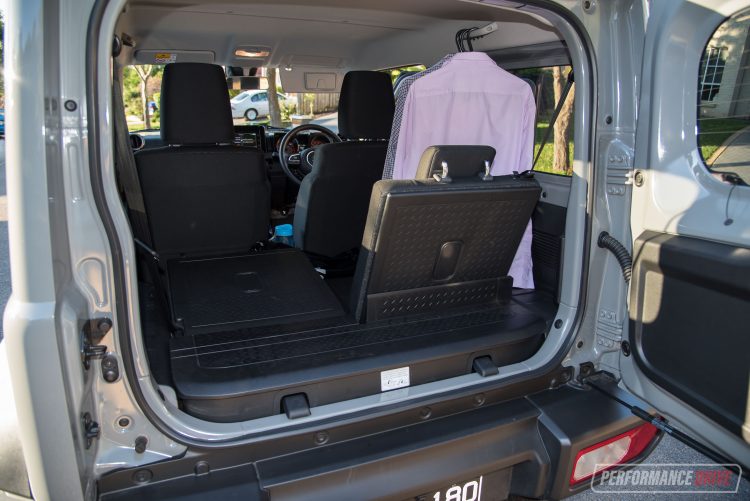 To get the bad out of the way first, if your Jimny is going to be spending most of its life on the tarmac, you wouldn’t be using it appropriately. For it to be such a good performer off-road, it needs to be not so good on the road. With a measly 75kW of power and 130Nm of torque at hand, it struggles to keep up with the regular flow of traffic – especially in the handicapped four-speed auto. The five-speed manual gives a little improvement in wrenching that maximum power, because the engine speed can be utilised more easily. 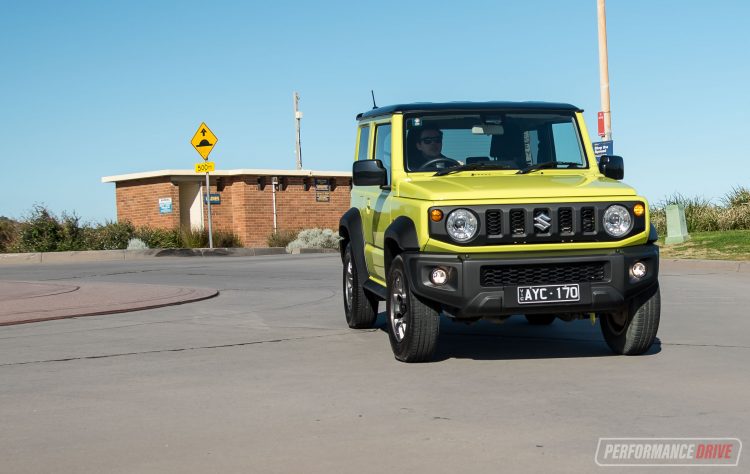 If we haven’t mentioned it enough, off road is where the Jimny belongs. And there are many reasons why. Firstly, it is designed with minimal body overhang. The approach angle is 37 degrees, the ramp break-over angle is 28 degrees, and the departure angle is a huge 49 degrees. This means you can tackle steep gradients, dirt mounds, and drops without scraping the body. It will outdo a LandCruiser in many areas.

In addition, that short wheelbase of only 2250mm, a ground clearance of 210mm, and only 1645mm of width gives it abilities to go places like no other. 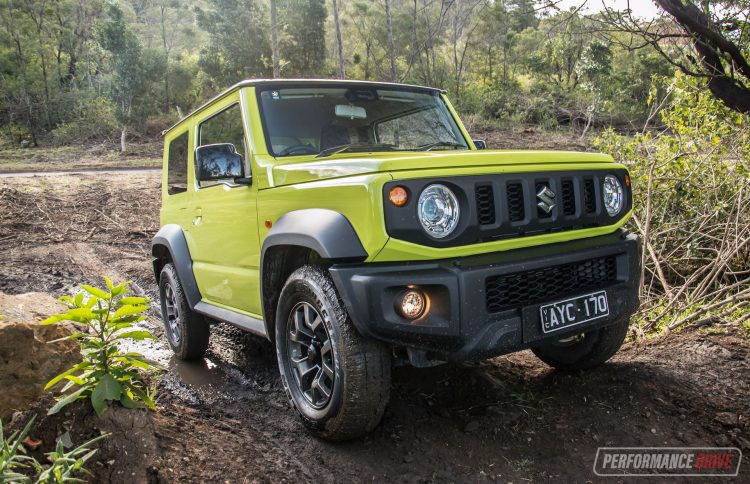 In combination of the ladder frame and three-link rigid axles with coil springs on the front and rear, the Jimny has an ultra-solid and better protected foundation when driving through rugged conditions. Compared to the previous generation, a new cross-brace and two additional cross members have been added to increase torsional rigidity. Hairy situations can also be tackled thanks to a low-range transfer case in the auto and manual. This is an offering that is becoming rarer these days.

The Jimny also comes with some impressive control systems that Suzuki aptly names All Grip Pro. For example, Suzuki explains that “when two wheels diagonal from each other lose traction, the Jimny’s brake LSD traction control automatically brakes the slipping wheels to redistribute torque to the other side and allow the vehicle to gain traction”. Hill descent control, hill hold control, brake assist, and weaving alert are all standard. 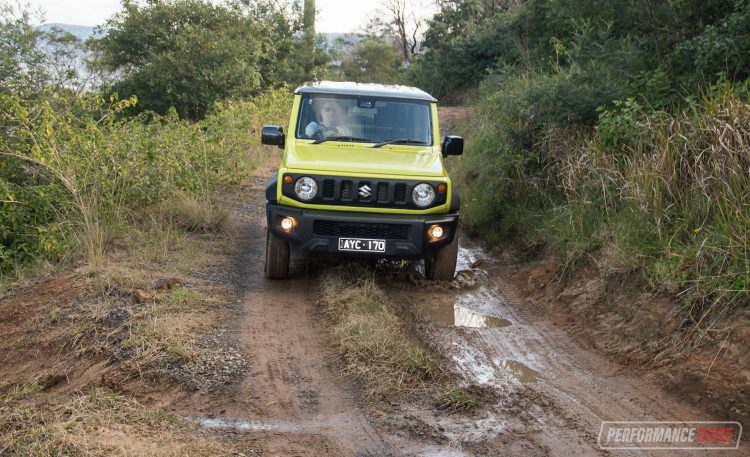 During our latest off-road tests, which were not all that challenging but still quite rugged, the Jimny proved unstoppable. In our previous tests we threw some tougher conditions at it and it still pulled through with relative easy. It remains as one of the most capable off-roaders on the market in our opinion, and definitely so compared with any other small or compact SUV.

Among all the doom and gloom of a severely underpowered engine and a few gear ratios short of a modern car, it’s somehow a really fun car to drive. All the revving and pushing it needs seems to give it character. It gives driving a more down to earth, interactive feeling because you need to think a little more about what you’re doing as you juggle its primitive characteristics.

It may not be an SUV suited to everyone’s lifestyle, but we think it definitely has appeal in niche markets, such as explorers and adventurers, and even younger drivers looking for something fresh and cool. And being in a league of its own, it’s not trying to be better than any other.

If you can be bothered to use a clutch and change gears these days, get the manual transmission. It helps to get the engine revs right to extract the minuscule amount of power from the engine. On the other hand, the auto is the pick if you’re looking to go on regular, very serious off-road excursions.

PROS:
– Off-road performance sends the Jimny to places many other SUVs can’t dream of going
– Fun to drive and full of unique character
– Great on fuel
– Funky and modern design, inside and out
– Good value for money

CONS:
– Engine is underpowered for everyday use and revs too high at freeway speeds
– Seriously, no rear speakers?
– 3-star ANCAP safety rating